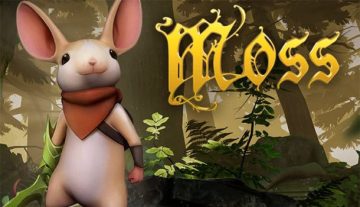 It’s a question VR players have been asking since Moss’s reveal during Sony’s 2017 E3 press conference: Will Moss be available on the Oculus Rift and HTC Vive? And today Polyarc has answered with a resounding yes. In fact, Moss, the highest-rated PSVR title released in the last year, is now available for download on both platforms through Steam, Oculus Rift, and HTC Viveport stores for 29.99 USD MSRP.

Revered as one of the best VR titles to date because of its intuitive gameplay, creative design, and high degree of artistic polish, Moss brings a unique experience to gamers around the world. In Moss, players guide a young mouse hero named Quill on an epic journey while also manipulating the field of play as their own character and key ally to Quill. Moss brings together classic components of a great game – characters, combat, and exploration – with the exciting, interactive opportunities of virtual reality.

“Our mission as a studio is to create games that maximize the potential VR has to transport players into our stories and worlds. Bringing Moss to these platforms allows us to introduce Quill and her world to more than a million new players,” said Tam Armstrong, co-founder and CEO of Polyarc. “There’s no other platform that allows you to truly connect and form a bond with characters such as Quill, explore rich environments, or engage in imaginative gameplay like VR. Starting today, all Oculus Rift and HTC Vive fans can join PlayStation VR fans in playing a first-of-its-kind gaming experience with Moss.”

Today’s PC release brings with it an enhanced depth to the immersion players will experience in Moss as the game is optimized to leverage Oculus Rift and HTC Vive technology. Along with high-resolution graphics, players can now manipulate the environment with both hands using the Oculus Touch and HTC Vive controllers. Inviting more players around the world to play Moss, Polyarc added support for Chinese, Japanese, Spanish, and Italian languages, and included multiple save slots for players wanting to share Moss without interrupting their progress. PSVR owners will receive the additional language support, save slots, and other updates on June 12.

Players attending E3 next week will have the opportunity to explore the world of Moss on the Oculus Rift via a playable demo in Facebook’s booth in the South Hall #2301. For others looking to glimpse into the world, the Moss Trailer highlights the depth of the environments and gives a taste of the unique bond players will form with Quill.