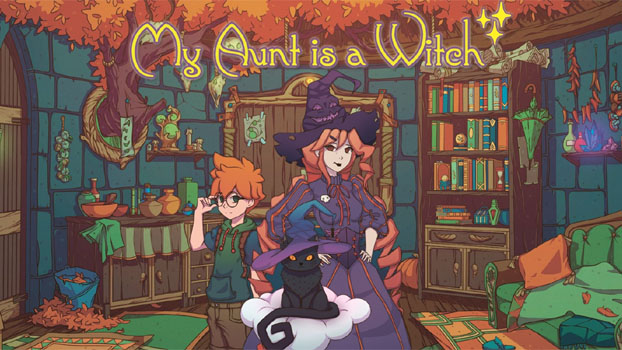 Created by Russian game developer and publisher Sometimes You, My Aunt Is a Witch is something of a cross between a visual novel and an old-school point-and-click adventure game, combining more traditional visual novel elements of lush illustrations and otherwise primarily text-based storytelling with some elements of adventure game questing and search-and-find gameplay.

The protagonist in this visual novel is a young boy named Thomas, who, in this Hansel-and-Gretel-inspired tale, is essentially driven from his home by his stepmother. He ends up going to live with his aunt, Alice, who turns out to be an actual witch. Alice has a disturbingly bad track record with her apprentices and apparently poor business sense, but she’s is in need of a new assistant potion maker, and Thomas is apparently desperate enough to sign up. 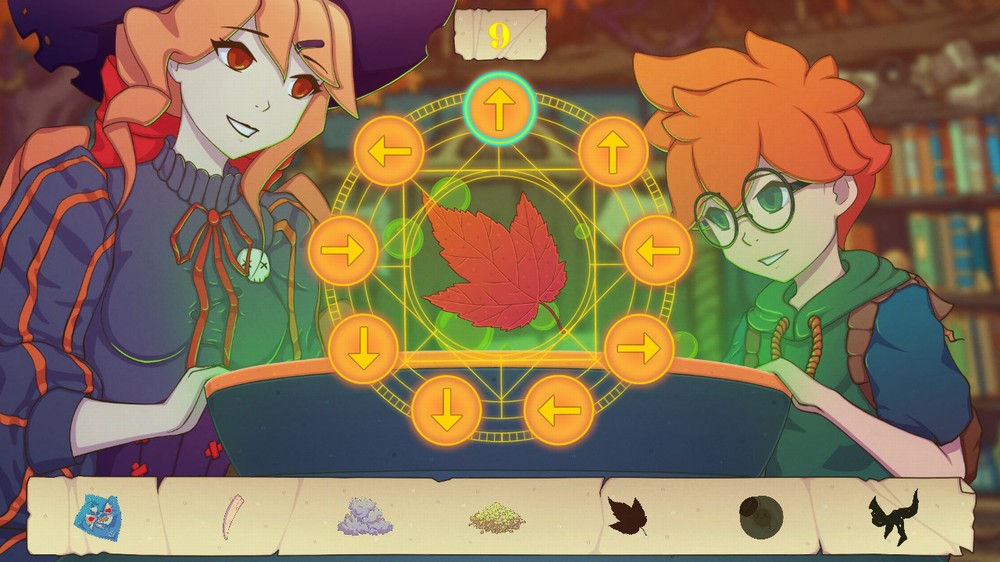 If you’re familiar with either the visual-novel or adventure genre, you’ll likely feel right at home with this game. As with the typical visual novel, you can expect the majority of your experience to be reading lots and lots of text, and there is no voice over as there is with some more recent titles, so you’ll definitely be reading. This isn’t necessarily a bad thing, though. Anyone with an interest in visual novels likely enjoys reading anyway, and I, for one, far prefer reading to listening to sub-par voice acting.

Starting with the good: the illustrations, as most visual-novel readers generally expect, are beautifully hand drawn, with rich color palettes and lush, whimsical details (including the skulls of Thomas’s unfortunate predecessors tucked into nooks and crannies throughout Alice’s quaintly cluttered home) reminiscent of the intricate cottage-core environments of Studio Ghibli films. The characters are perhaps a bit orthodox (like the bookish young boy, the prickly and self-interested cat, and the mercurial and quick-tempered witch) but still cute. Overall, the art was one of my favorite parts of the game, and I enjoyed the fairytale feel of the overall aesthetics, which extend to the menus and settings screen. 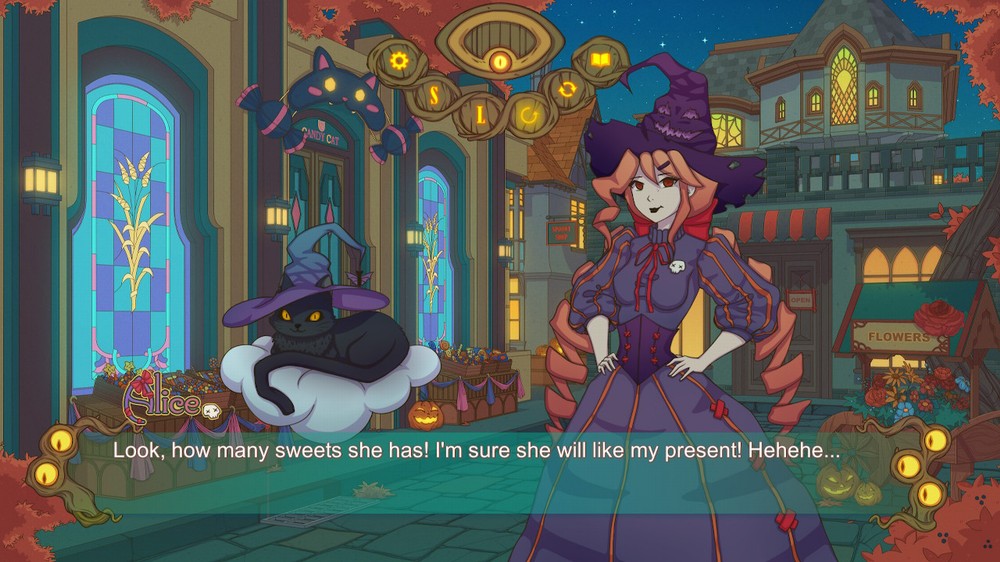 Similarly, the soundtrack is pleasantly magical, with plenty of celeste, which most folks will probably recognize from its prominent use in the Harry Potter movie themes. The game also makes effective use of occasional sound effects, whether it’s the yowl of a cat or the bubbling of a cauldron, to help create a more immersive experience.

One of the weaknesses of the game, unfortunately, is the text itself. I noticed right off the bat that there were a lot of spelling and grammar errors—not just a few as can be expected to happen with such a text-heavy game, but so many that they can become a bit distracting, and I would not have considered the game ready for prime time if I’d been the developer or publisher. I understand that the game was originally written in Russian, and some awkwardness in translation can be reasonably expected, especially from an indie title with a lower budget, but the game would have definitely greatly benefited from at least one more pass by a good editor.

As for the adventure-game elements, which include a few simple quests that mostly involve the standard search-and-find type of gameplay, as well as some simple puzzles involving using certain objects found around the environments to accomplish other tasks, I had no complaints. The game provides reasonable hints for how to complete the puzzles, and there is an in-game log and inventory to help you keep track of tasks and objects collected. The difficulty level is fairly low and should be approachable for casual gamers. 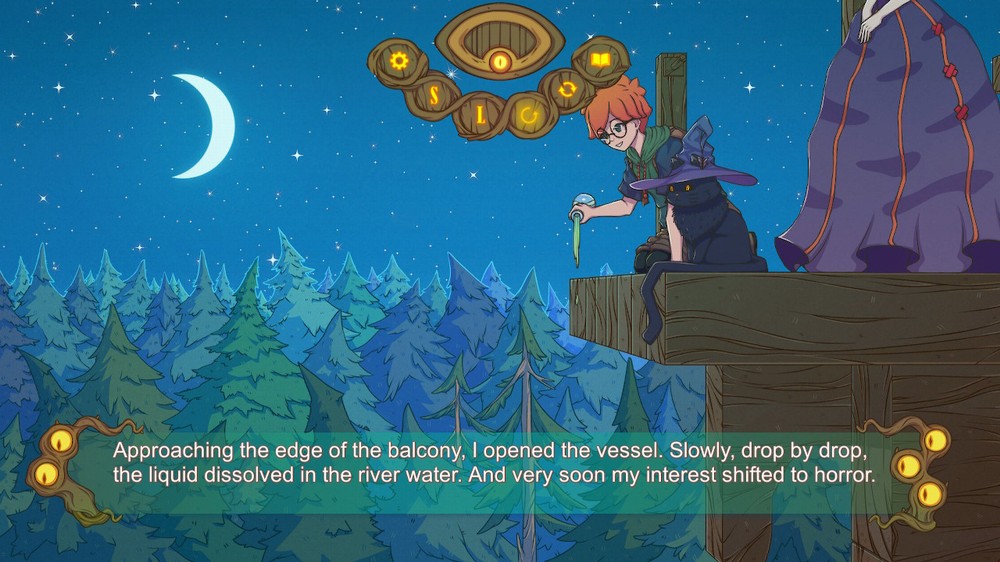 Potion making only occurs a couple of times in the game and involves a simple minigame in which you’ll need to accurately press a specific sequence of direction buttons in a set time period, with each ingredient added involving a longer sequence and, therefore, higher difficulty. The minigame itself was not difficult (for me as a longtime gamer), and I’m not sure how challenging it would be for someone not as used to entering sequences precisely on a controller, but I will also say that the game is very forgiving when you make errors and will let you retry as needed. More on that in a moment.

One caveat, though: I did notice that while the directions (which must be entered on the plus-shaped direction pad on the controller) were easy to enter correctly on the Nintendo Switch Joy Cons, I found the minigame to be unexpectedly frustrating on the Nintendo Switch Pro Controller. I think this has to do with the direction pad being four buttons on the Joy Cons, versus the plus-shaped single button on the Pro Controller, which might not provide as clean of a directional input, as I think sometimes the game read my button presses as a combination of directions, rather than just one direction. To use the Pro Controller successfully for the minigame, I had to be super careful about only pressing the plus shape on the very ends of the plus arms, which was annoying. I don’t typically have trouble with entries from the direction pad on my Pro Controller, so I think perhaps the game’s coding would benefit from some tweaking to give it a little more tolerance in this regard. 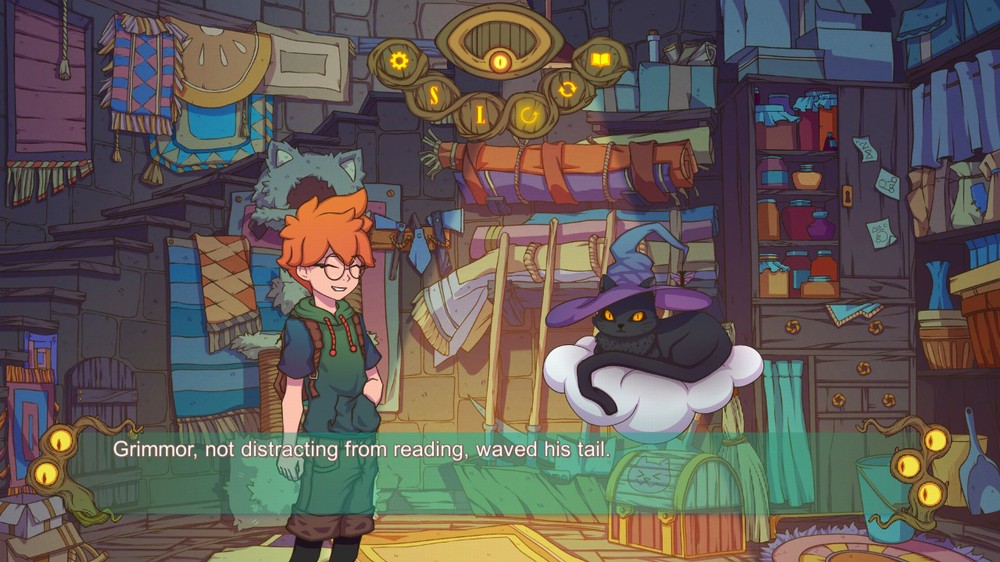 Anyway, regarding failure: there are a few points in the game when Thomas could potentially follow the footsteps of Alice’s unfortunate prior apprentices and actually die if you make a misstep (though you can save at any point and reload from your last save as needed to continue on), but I didn’t experience any deaths even when using the Pro Controller repeatedly screwed up my potion making inputs. In fact, the game seemed to just move me along to the next scene when I repeatedly botched the most complex last sequence of the final potion making session, which was a relief in terms of alleviating my overall frustration at the time, but it also made me wonder if doing well at potion making mattered at all in this game.

Regardless, the minigames are a very minor part of the overall experience of My Aunt is a Witch, so players that prefer the visual novel genre to the adventure genre and don’t enjoy puzzles or minigames shouldn’t be too turned off by them, while players that prefer adventure games would probably find them to be a bit tedious and probably not challenging or off-the-wall enough.

Storywise, I didn’t feel particularly invested in the characters or plot, which is slow-moving and only starts to pick up a tad close to the final moments of the game—at which point the game abruptly ends without resolving anything. I suppose it’s meant to be a cliffhanger because the ending screen promises that Thomas’s story will continue in a future episode. With how little happens in the game, though, at least for me, it was hard for me to feel enough impetus to bother continuing the story. 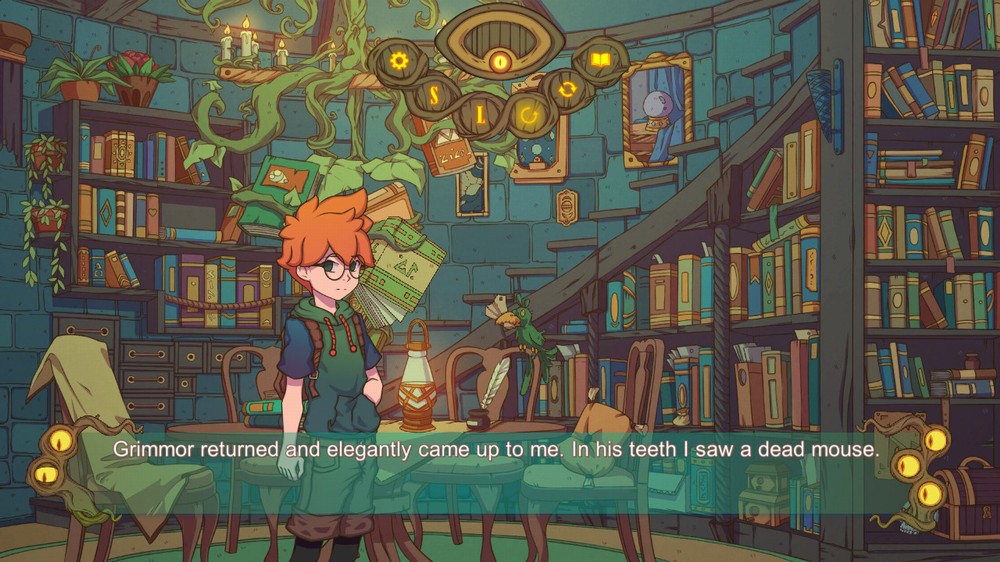 I should also mention that though this game is rated Everyone (10+), there is some mild language (a few instances of damn and hell, nothing stronger), as well as some iffy situations that, depending on your personal views, may not be appropriate for younger children. (I apologize for the mild spoiler, and this is revealed very early on in the game, but please skip over the next sentence if you’d rather avoid it.) For instance, the witch’s cat is her on-and-off boyfriend, whom she transformed into a cat without his consent and whom she frequently abuses throughout the course of the game; and there are quite a few off-color comments about women. Notably, despite Alice being one of the protagonists of the game, she and the other female characters in this game are generally portrayed as cruel, moody, unreasonable, and materialistic. I don’t know about you, but that’s a well-worn and distasteful sexist trope I’d be happier never seeing again in any kind of media, particularly media labeled as being for “Everyone.”

In any case, My Aunt is a Witch is available at the Nintendo eShop for $9.99 at the time of this writing, and it’s a very short game that I finished in three short sessions totaling about five hours, even with taking my time to thoroughly explore and take screenshots for the sake of this review. At least from what I can tell, it doesn’t seem like there are multiple paths to explore, so there’s probably not much reason to replay it, but maybe future installments will prove me wrong. Your enjoyment of visual novels and the particular art and prose style of this game (as well as your tolerance for typos and sexism) will probably determine whether you feel the $2 per hour cost of this game is a good value for your buck.