As a veteran gamer I have always been aware in the back of my mind that I am part of the first generation to have video games readily available. Anyone who is about twenty-five years old or younger in this country has grown up around games, directly or not. As such, the future generations will see things in a different perspective as far as the gaming world is concerned. Where I had NES, they now have Xbox 360, so it is safe to say that gamers will be born younger and younger as the years progress.

Activison has had this revelation, and for that, they have started lowering the age demographic and target, I’m not saying that this is the first time it’s thought of or even been put into use (just look at their DreamWorks line-up), but I have noticed while playing Bee Movie Game that they are definitely targeting younger audiences with greater frequency.

Bee Movie Game, based on the upcoming DreamWorks animated feature, is a fast paced, platform game that has a lot of really original perks, such as the vibrant colors, and very interactive environment (Not to mention Bug on Bug aerial dogfighting..or is that bug-fighting).

The Story stays “true” to the movie; at least that’s what I was told by the developers, although as with most movie games, there will be some creative excursions from the movie plot to explore unseen territory.

Essentially it is a children’s game, but does rule out an older audience. Some of the action sequences that are involved in the game are very entertaining, for example, as in the movie there is a scene in which our main character “Barry” happens to accidentally get himself involved in playing tennis. As the player controls Barry, he finds himself stuck to the tennis ball, and to avoid being caught between the ball and the racket he has to rotate the ball in the opposing direction.

Though most of this is interactive, we expect to see a lot of cutscenes throughout the game as well as lots of quick-action elements where you have to reflexively repeat movements and button presses on command.

Though the game is very linear, due to the fact that it is based off a scripted movie, There is the Base of Operations: New Hive City. NHC Is a living-breathing realm that has traffic, houses, parks, shops, very similar to what you would find in human cities, with the small little detail that it is a Hive…a city full of bees. It is in this city that the player has a handful of small mini-games and quests that create additional game time and a little extra entertainment.

One of the very apparent downsides to the game was a small list of enemy types. As the game progresses the player will see the same dragonflies and wasps that want to make Barry into jelly himself, so I’m sure that killing the same hostile insects a hundred times will get a little boring. The gameplay, while diverse in locations also seemed to repeat the same concepts, just in slightly different ways.

As it stands the game is set to be a hit, and hopefully it won’t follow the path of most movie based games, With a lot of really awesome graphics, it will sure be a great game to watch, but on the other hand, I have to wonder how much fun it will be to play. 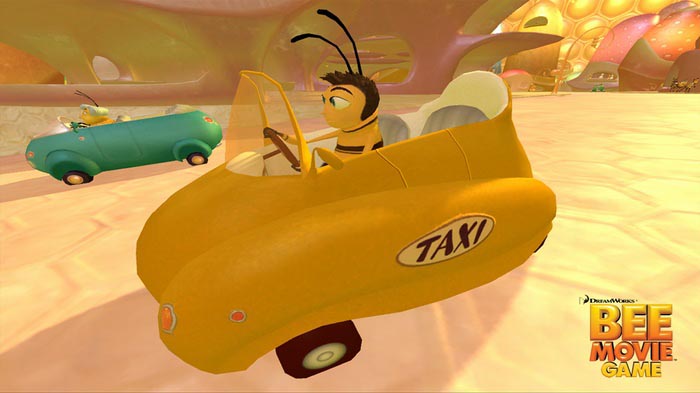 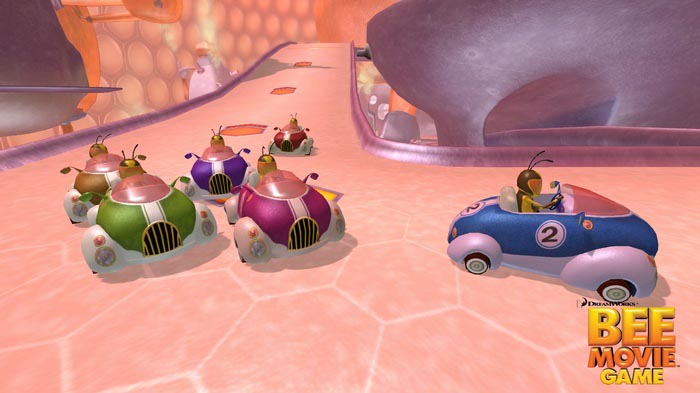 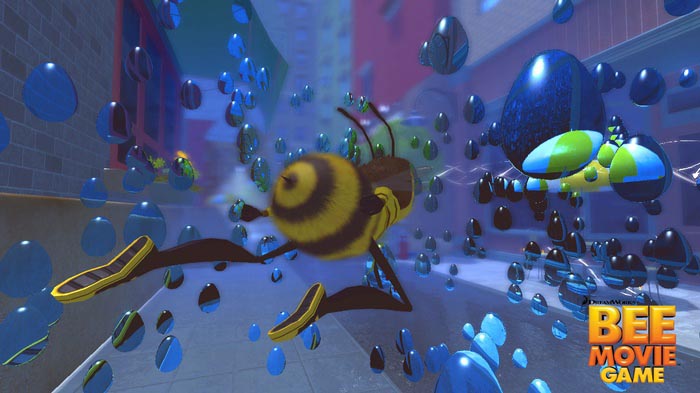 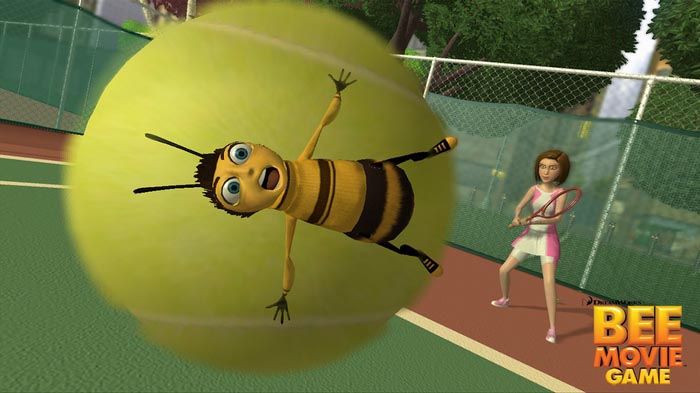 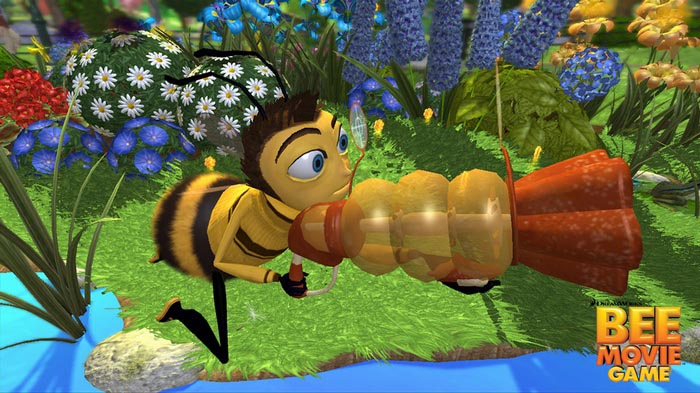 Who Goes There? Friend or Foe?

Spider-Man is back…again…and again and again. He never seems to go away, and to be honest I think that most players out there would agree that it is about time that he, as a platform character, be retired. After three solo adventures on consoles plus side-excursions to NDS and GBA as well as appearing in Marvel Ultimate Alliance, Peter Parker should be running out of web fluid by now.

It always seems to be the same tired concepts over and over; “a city built to scale” or “freedom to explore every inch of the city” But I never hear “You get to kick the snot outta the same goon a hundred times! AWESOME!” No, as far as I was concerned it’s over, yet they keep throwing these games at us year after year.

This was my first thought when I heard about Spider-Man: Friend or Foe, that is until I actually played it. When it comes to making a superhero game, it’s really easy to play it safe, and that’s usually what happens, But Developers from Activison walked a little different path this time. Instead of the platform game that we have all grown accustomed to, it’s now an action-platform (with an emphasis on action) title that has a little twist.

Imagine you’re Spider-Man, and your kicking Venom’s butt, then right when you’re about to finish him completely, I mean you’re going to send him to “Game Over”, he tells you he wants to fight with you, so now you’ve got Spider-Man’s agility teamed up with Venom’s Brawn, and your kicking ass! And that’s just the beginning. A whole cast of infamous foes will soon turn out to be “friends” in this latest action romp.

What cooler way to send Spidey back into our hearts and our consoles? The game is developed through Next Level Games, and wow…did they do a great job. I’ve never been a big fan of the Spider-Man video games, but this one blew me away. Set with beautiful graphics with both the Xbox 360 and the Nintendo Wii, and a storyline sure to surprise the player, I can seriously say that this game is a must have, I know that it will be in my hands as soon as I can web me a copy.

The one problem; not so much a problem as a big difference, that I saw between the Xbox 360 and the Wii, is that the control system is a little more simplistic for the 360 whereas the Wii’ version makes full and ample use of the motion controls so that you can flick your wrist to do a certain attack vs. pushing buttons on a hand held controller. This could swing the game in both directions. As we’ve already seen with Spider-Man 3 on the Wii, people had some severe issues with the control scheme and the lengthy learning curve.

One thing should be brought to the player’s attention; this is Spider-Man’s game and as such he is the central character and the player must have him in play at all times unlike a game like Marvel Ultimate Alliance. This is to be expected, but sometimes that boy can just get on my nerves. It would have been nice to mix-up the team and leave Parker at home occasionally. 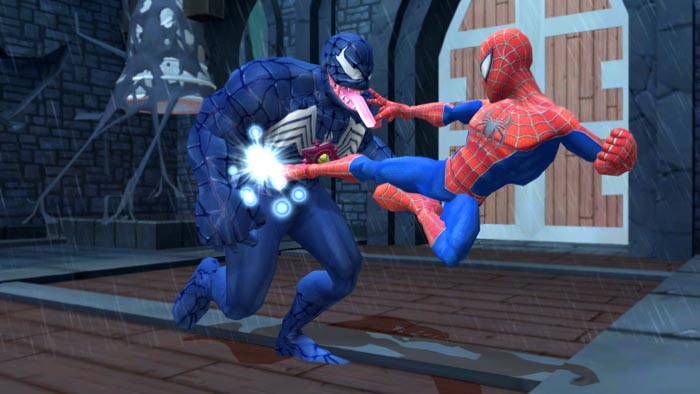 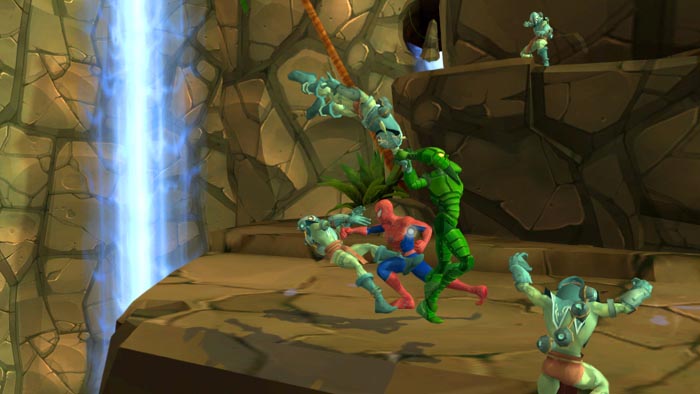 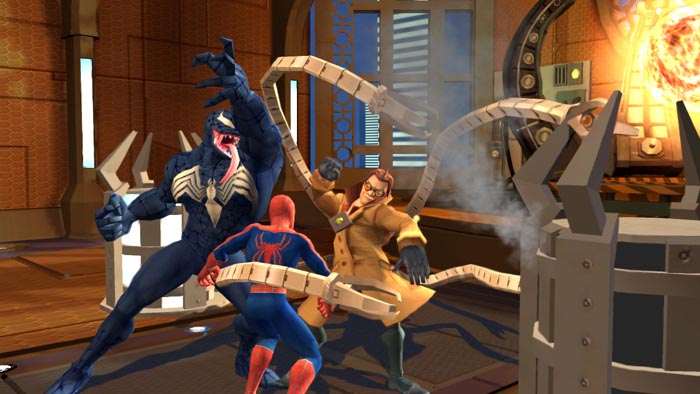 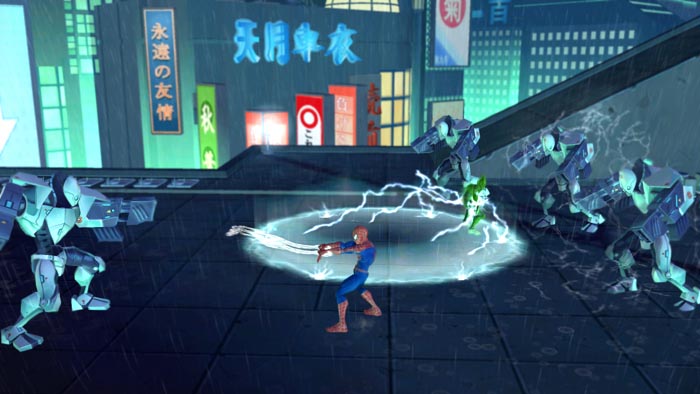 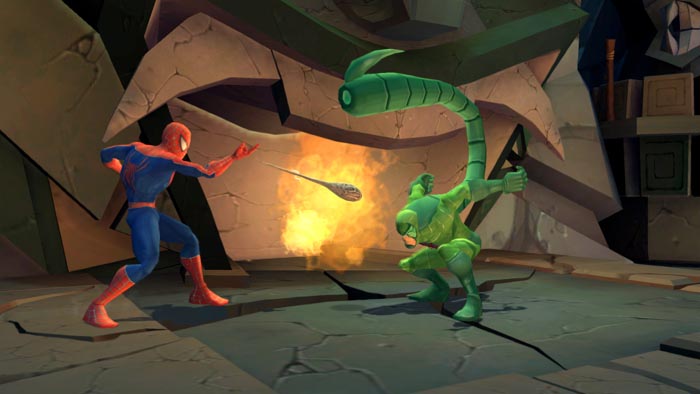 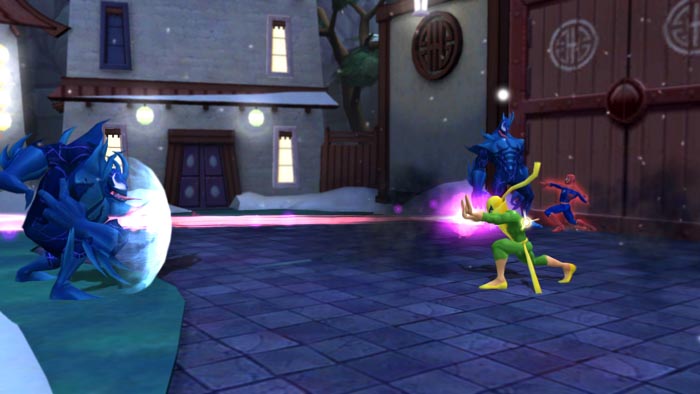 No I’m not talking about the superhero, although in the world of skateboard, Tony Hawk has certainly achieved that status. And now, much like tax time and birthdays, Tony Hawk is back for his yearly appearance on video game consoles, and it’s more brutal than ever before. All I can really say about this game is “WOW”

With stunning graphics and a soundtrack to blow the players’ minds, good things should be expected when Proving Ground shows up later this year. As it stands the new Tony Hawk title is based off, of course, Tony Hawk and his professional skateboarding, just like the original games that were developed for the PlayStation and every console since.

But now Neversoft is taking a radical new approach to the world of skateboarding. Running with the “Project 8” engine, then leaping headfirst into next-gen territory, this game features a lot of the original tricks and stunts, but also adds a true feeling of what the world of skateboarding represents; “freedom”, the freedom to go wherever and skate however your imagination can think up, and more.

As with the original games there are pedestrians that may block the player’s path, and in the past, these presented a problem with your tricks since those pesky bi-peds kept getting in the way. No longer do you have to deal with that. Screw those pedestrians and Check them in the Dome! I must say there is something brilliant about watching some unsuspecting citizen fly through the air like a rag-doll – makes me all warm and fuzzy inside.

Along with “checking” there are a lot of really cool additions to the game, such as “Nail the Grab”, and “Nail the Manual” which allows the player to slow things down and pull off unique new grabs and sick moves to rack up more points! Tony himself had a bit to say about this when checking up on the game, and it would be safe to say that creativity involving this game is more freelanced than before.

Though this game has only three cities in which the player can tear up, those three will definitely make it worth the time and effort. And just like in the past, they are still running it with ” Amateur, Pro, and Sick” settings on each trick for near-infinite replayability.

If you’re feeling a little lonely, hop on the web and join the “Skate Lounge” which allows up to 8 players to skate freely around a warehouse that you design. It really does allow the player to show their Personality and Freedom in this game, as well as show off their accomplishments from the main game.

With so much to do, and so little time, the worst part of this game is the learning curve. Even for Tony Hawk veterans, it will take a long time for a player to get really good, but that is probably a good thing. You wouldn’t want a game you could master in a couple weeks. I would definitely recommend Proving Ground for skilled Tony Hawk players, however laid back gamers, in my opinion, will become too frustrated to really get involved in this.

With that being said grab it, tear it up, and see what you thing about it. There is a demo available on Xbox Live Marketplace so find out for yourself. I’m not any sort of a skater, (I tried for 12 years and still sucked!) but I would say that it’s definitely worth a look. 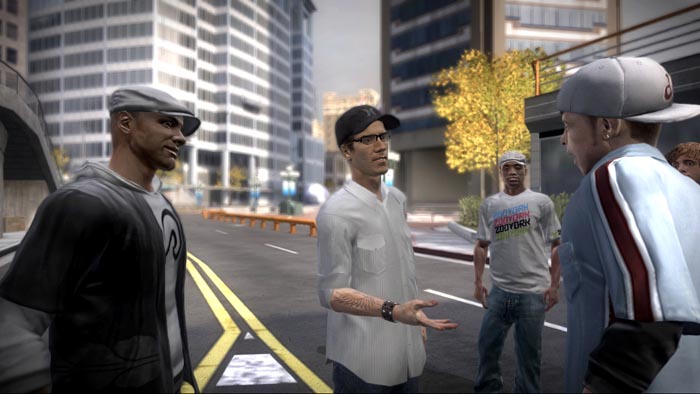 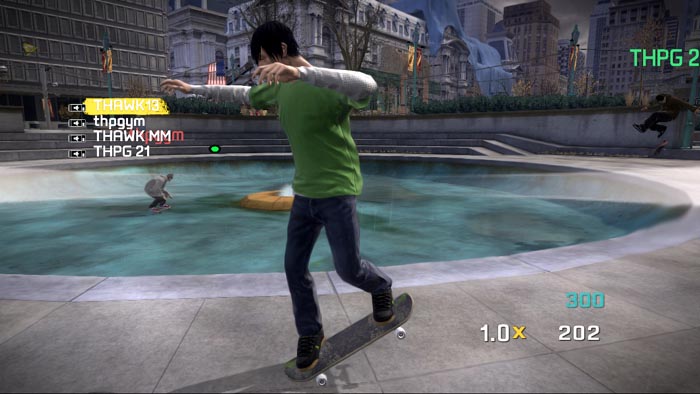 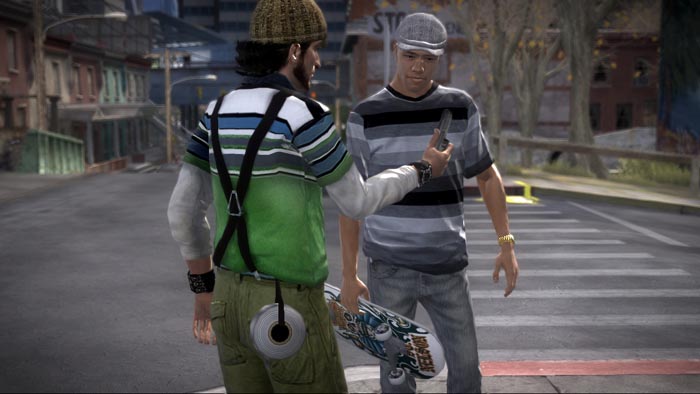 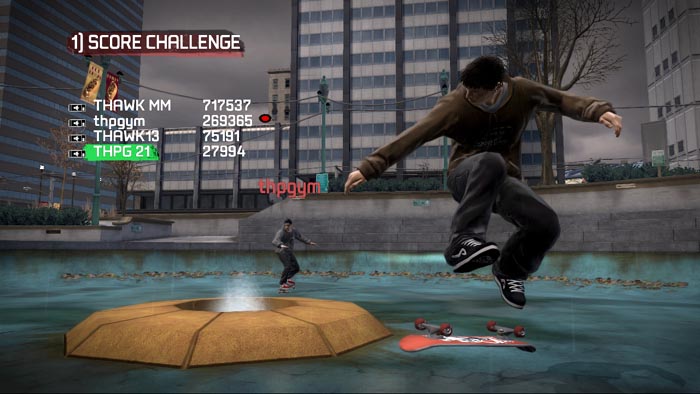 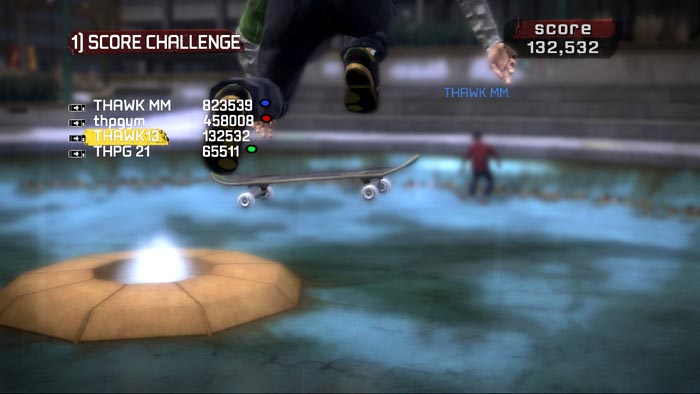 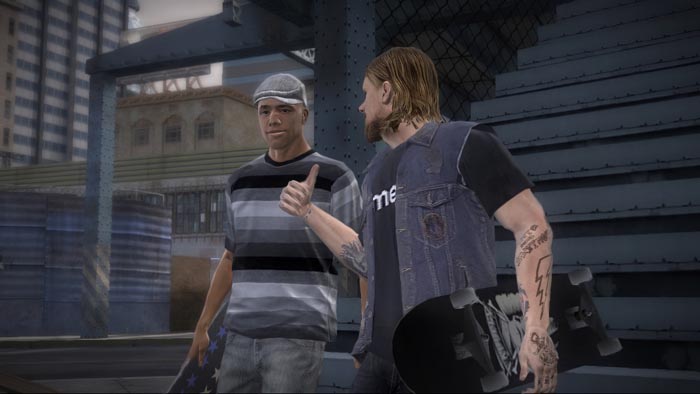 In Conclusion
The titles that Activison are preparing to release this fall really seem to affirm their integrity as far as quality gaming is concerned. The creativity shown in each of these projects and their respective design studios is endless and we should all be excited to see what they will think up next. With so many people playing videogames these days, the future of entertainment is certainly in gaming, and these are three titles to definitely watch out for in the coming months.

Seriously, check these games out – demo’s are available for all of them, then tell me what you thought of these games. I’m always looking for feedback from readers. So with all that being said, stop reading this, pick up the controller, download some demos and have at it! There are games to be played and worlds to be discovered, so what are you still doing here?

Revolution Disillusion
Be the first to comment!
Leave a reply »