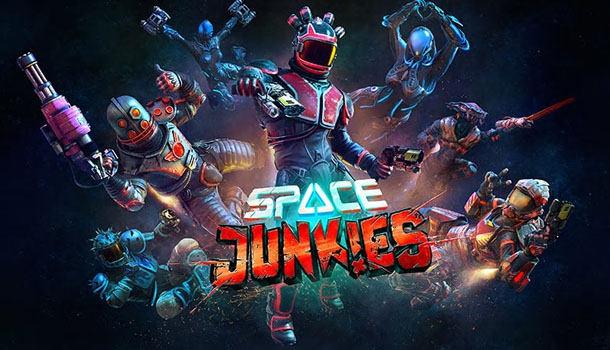 A solid futuristic update to the classic formula that redefines the genre.

The third and final update to Space Junkies has just arrived and with only one more surprise to come we decided it was time to finally review this adrenalin-fueled zero-G online shooter.

Leave it to Ubisoft to break away from the battle royale formula currently plaguing our current generation of arena shooters and go back to the old-school days of Quake and Unreal Tournament in their latest VR title, Space Junkies.   Given the frantic nature of the gameplay in a game like this Ubisoft had a lot of challenges in creating something that was fun and competitive yet didn’t require a VR-sickness bag. Honestly, I was surprised at just how comfortable Space Junkies was, even during extended play sessions.

At its heart, Space Junkies is a dedicated online multiplayer shooter. As of this review the latest update not only adds new 3v3 team battles but also a single-player experience that lets you practice against AI bots offline. But whether you are playing alone or in competitive team battles, the gameplay looks a feels like any of those classic 90’s arena shooters, only now completely immersive thanks to virtual reality. Levels are designed to offer plenty of open areas for conflict as well as corridors, ledges and overhangs to seek cover and the arenas are littered with power-ups and weapon drops that frequently respawn. 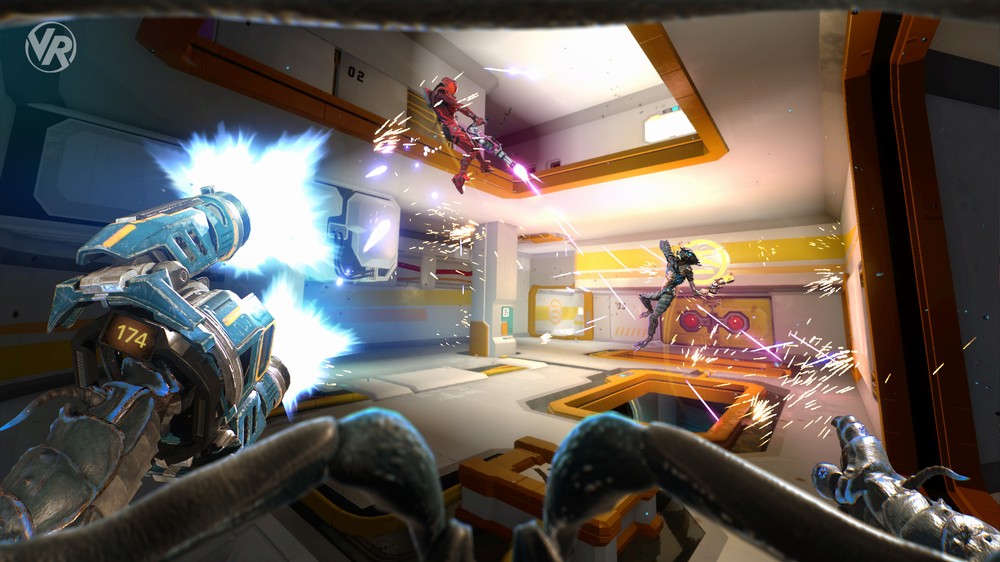 Shooters are only as good as their weapons and Space Junkies delivers a solid arsenal of firearms ranging from small arms like pistols, Uzis, and shotguns to larger weapons like a sniper rifle, mini-gun, rocket launcher, and one of my favorites, the explosive slingshot. Smaller weapons can be dual-wielded for additional firepower. I tested Space Junkies on both the Vive and the Rift S and as expected the experiences were nearly identical with the more comfortable Oculus Touch tipping the scales in favor of the Rift. The motion tracking and aiming is super-precise and favors a combination of using the in-game targeting sights combined with slight adjustments of player movement. Weapons also have fun physical movements required to reload and realistic two-hand grips on larger weapons, which really helps with the immersion.  You can even create your own taunts and emoticons with physical hand gestures.

There are plenty of fun game modes including the standard deathmatch and team deathmatch games that now support up to six players. There is also King of the Crown that pits everyone against the person who has the crown and even reveals their location within the level. The most recent update also adds a new Jail level perfect for close-quarters combat including swords. The Bowminator is a new weapon that rapid-fires three arrows or combines them into a single super-shot. To make the most of this new bow and sword/shield combo there is a new Chivalry mode that restricts players to just those weapons – medieval combat in the space age. Groovy! 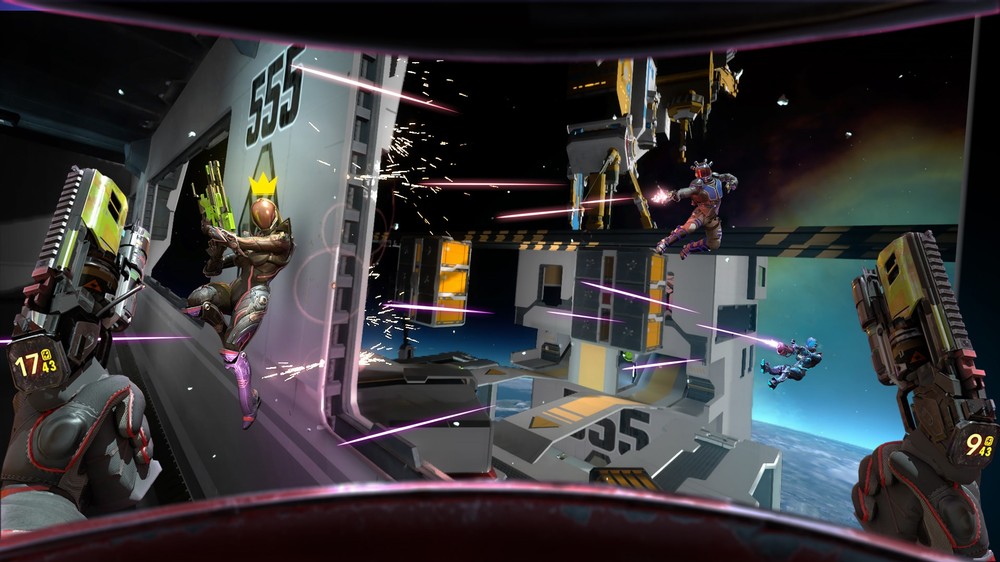 Multiplayer games are only as good as their community and Space Junkies has the power of Uplay backing it, allowing full cross-play matchmaking between PSVR, Steam, and Oculus Store players, so no matter where you purchased the game or what headset you are using you have access to a full community. Open matchmaking generally takes less than a minute for a Quick match and there are provisions for setting up team games and private matches with direct tie-ins to your Uplay friends list. There is also an XP progression system that ties into the cosmetic loot boxes, but rest assured there are no micro-transactions or in-app purchases. You’ll earn your cosmetics through gameplay.

Presentation is solid with flashy and reasonably complex level designs that balance just the right amount of polish and detail yet keep things in check for smooth framerates that keep VR sickness at a minimum. Smooth turning is an option and you can toggle between 180 and 360-degree combat, although I wouldn’t try playing this sitting down. The game supports room-scale and players will benefit from a larger play area that allows them to physically move around the VR space. The optional helmet HUD certainly helps in minimizing motion sickness and the game keeps players locked into the same horizontal plane so things don’t get too crazy when moving around. 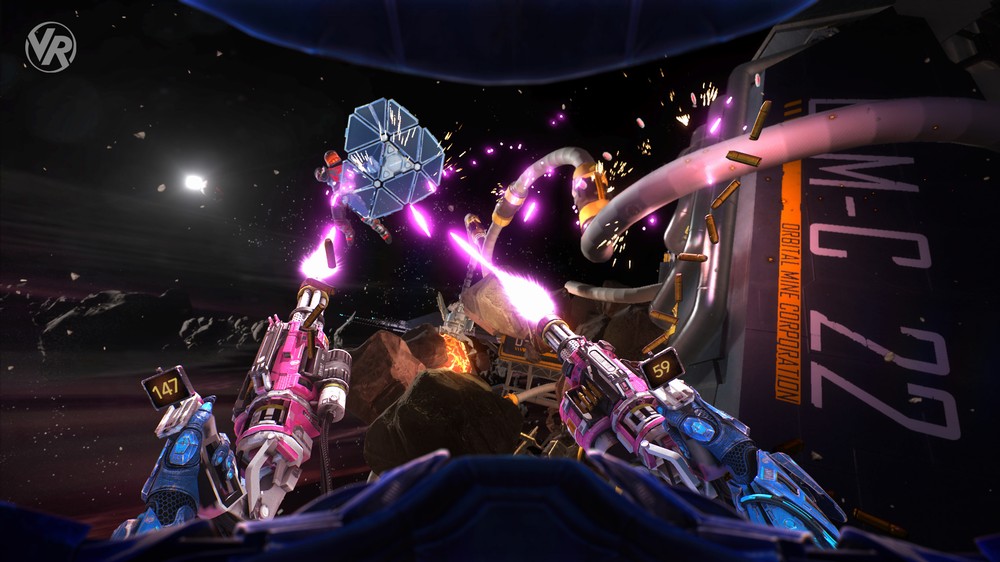 If you’ve been looking for a classic 90’s-style arena shooter and have a VR system then Space Junkies might just be the game you’ve been waiting for.   Given the multiplayer-only focus of the game your enjoyment outside of the AI bot practice mode will totally rely on others. $40 seems a bit steep so you might want to wait for a Steam sale. There is a lot of old-school shooting fun waiting for you in Space Junkies, and the VR is a solid futuristic update to the classic formula that redefines the genre. 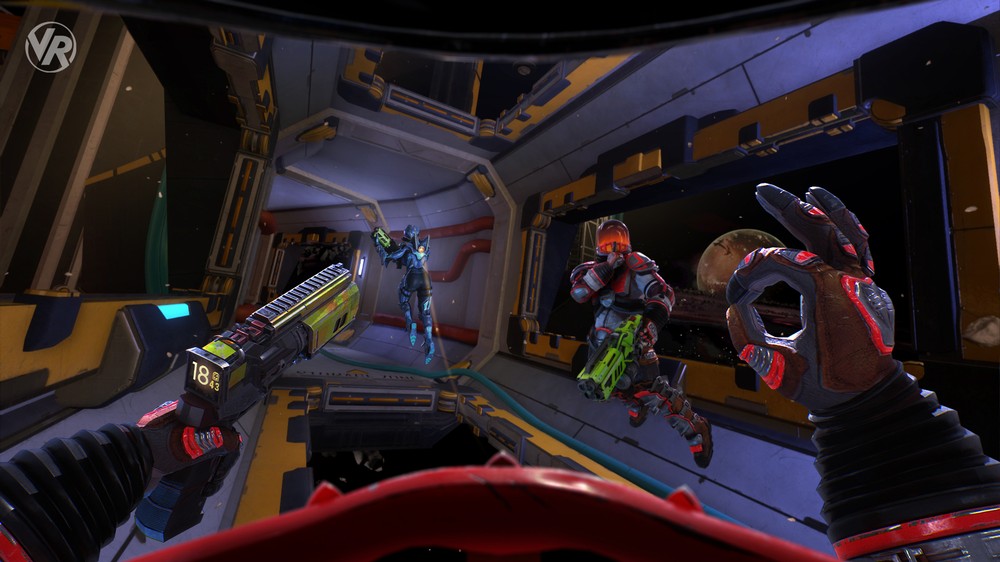