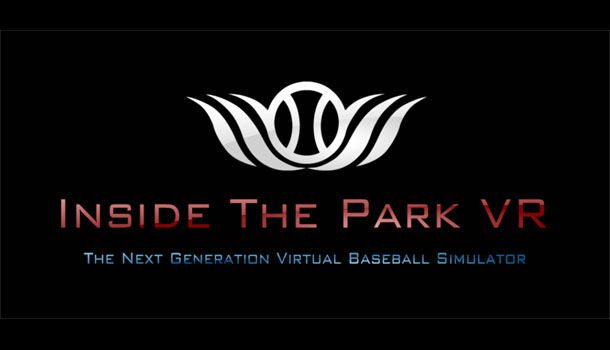 Your money is better spent at the real batting cages or playing catch in the backyard.

I consider myself a fairly competent baseball fan and player; at least when it comes to competitive bar leagues. I’ve been known to smack the ball around at the local batting cages and I play catch with my nephew, which is mostly the extent to what Inside the Park VR strives to achieve and does so somewhat successfully, at least at a superficial level. Sadly, the experience comes nowhere close to the hype built up in the Steam description and I’m guessing nowhere near the hopes of the developers despite their best intentions.

Inside the Park VR has a boatload of features, most of which are implemented even in this stage of Early Access, but when it comes to actual playable content and the level of immersion when it comes to control in the game, things fall apart quickly. I reviewed the game on a moderately high-end PC with a RTX2060 card and an Oculus Rift.   The graphics were quite nice whether you chose to play in the stadium or hang out in the batting cages. It was especially fun to switch to night mode and watch the stadium lights kick on and see the city skyline light up. There were good models for the bats and gloves that featured different materials and colors and fun visual effects like ball trails to help you see better. 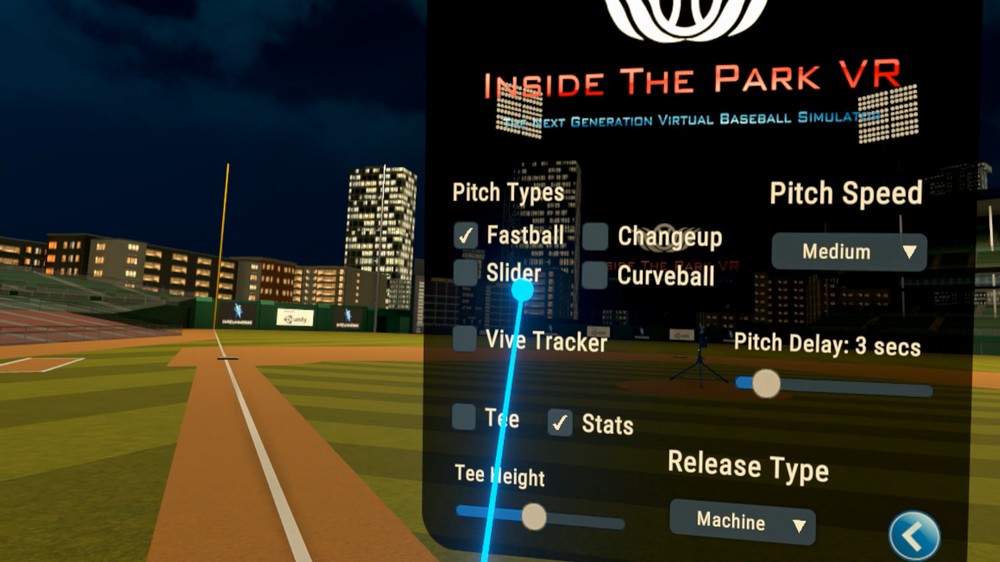 There is a plethora of settings and options, not only for technically tweaking the game but also in how you want to play with numerous difficulty settings, drill options, etc. But no matter how you tweak the game it just isn’t fun or even that playable using VR and motion controls. There are only two modes of play, batting and fielding, and batting falls apart immediately when you realize there is no way to realistically hold a virtual bat with two hands using the Oculus Touch, so you end up swinging the bat more like a tennis racket. Honestly, this tech would make a great tennis game. Apparently there is a way for Vive owners to attach a motion controller to a real bat, but who wants to swing a real bat inside your house? So with no proper way to hold a virtual bat in virtual space you lose any chance of posture or realistic swing velocity. To make matters worse the pitcher, whether human or machine is an idiot, throwing these insane pitches. On numerous occasions the ball would actually hit the bat that was sticking up behind my head while waiting for the pitch. Two out of every five pitches were behind my back and others were these crazy softball pitches that would arc 20’ above my head. You might get one good pitch across the plate out of every ten tries.

This lack of immersion carries over into the fielding mode as well where you get a glove on your non-dominant hand and a 3D model of the Oculus controller in the other – not even a hand. You can squeeze the grip button to close the glove if you can happen to make contact with the ball, but that will be extremely unlikely – took over 30 tries before I scooped up a grounder. The incoming balls are all over the place but if they happen to be outside of the dark green stripe in the grass you won’t be catching them. This mode is extremely dangerous to your surroundings, and even in my 10’x10’ play area I was still crashing into perimeter objects. This mode wants a room-scale experience the size of a gymnasium so you can realistically rundown the pop-flies, line drives, and grounders. This would be a perfect game for the wireless Oculus Quest and playing outside, but if you’re going outside just play for real. Inside the Park VR tries to make up for its shortcomings by offering a teleport movement and even an auto-move that will put you within range of catching the ball, but this sudden relocation is disorienting and doesn’t work nearly as well as expected. 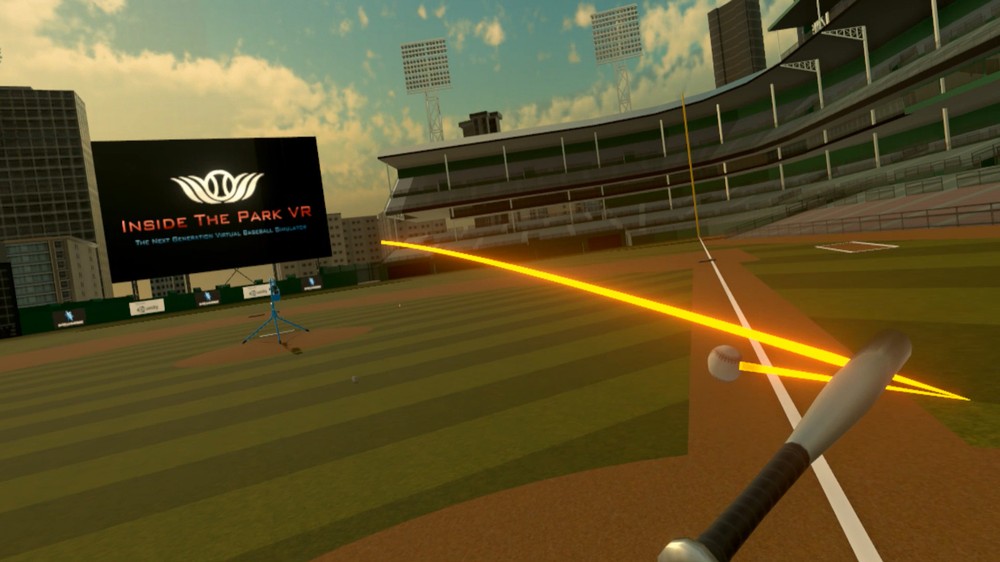 Throwing the ball is equally as problematic with the Touch not being accurate enough to track your hand speed or get the timing of the button release down for actually throwing the ball, so you usually make the full throwing motion and the ball falls at your feet. You actually have to overthink to force yourself to delay the button release until the very end of your throwing motion and even then the ball has some pretty weak velocity. I appreciated the flexibility of playing outfield, catcher, or any of the bases, but none of these positions were remotely realistic or fun for me.

There are some great ideas buried within this poorly executed training sim, but current VR tech just isn’t up to replicating the sport of baseball…yet. It takes pioneers like Intelimmerse to get us where we are eventually going to end up, so I can’t fault them entirely for the current state of Inside the Park VR, and who knows; they might turn this thing around before if finally releases. I’ll definitely revisit this title up to and including final release and make any changes to the review and the score if necessary, but for now, your money is better spent at the real batting cages or playing catch in the backyard. 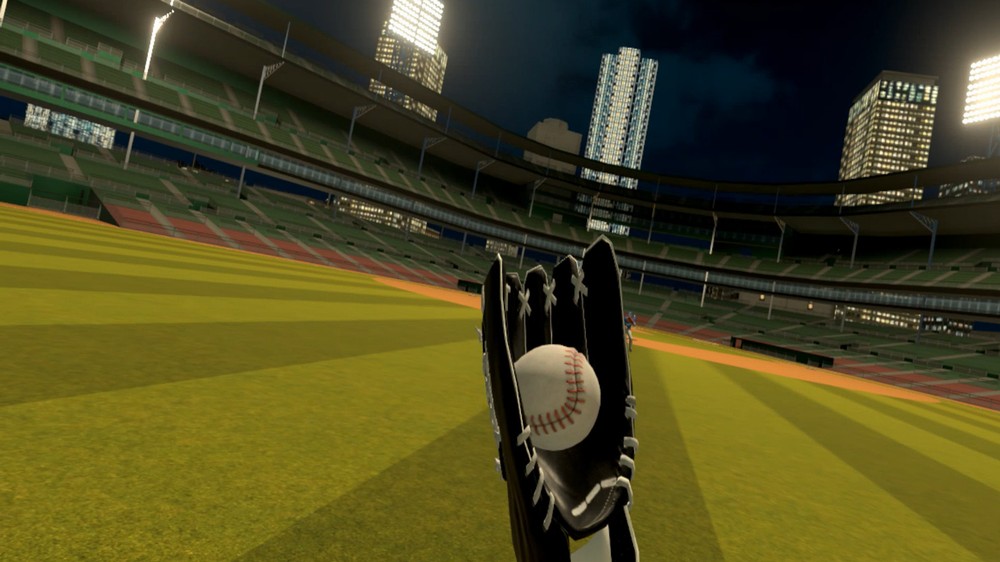 1
995
The Walking Dead: Saints & Sinners Review – Oculus Quest
2
802
Werewolf: The Apocalypse – Heart of the Forest launches on October the 13th
3
801
Worm Jazz Review – PC
4
801
Take to the Skies and Choose a Side in the New Trailer for Next Generation Air Com...
5
801
CRASH BANDICOOT 4: IT’S ABOUT TIME IS AVAILABLE NOW
6
801
Frictional Games Shows Off First Gameplay Footage of Amnesia: Rebirth
7
801
Synth Riders Celebrates Anniversary with a Month Full of Treats and an Oculus Ques...
8
800
Join the Galaxy’s Finest as Star Wars™: Squadrons Soars Into Homes Today
9
800
The Falconeer First-Look Preview – PC
10
800
Metamorphosis is 33% Off on Steam!
All Original Content on Game Chronicles is Copyright (c) 2002-2020
Sinjin Solves Walkthroughs Copyright (c) 1996-2020 by Mark Smith