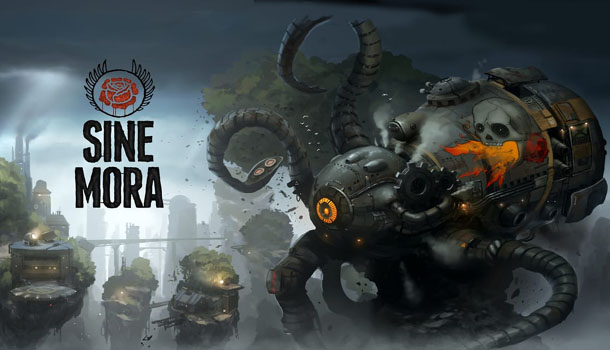 A fantastic shooter that will provide endless hours of addictive gameplay.

March, 2012 seems so long ago, but that was the first time gamers got to experience the insanity of Sine Mora, a bullet-hell SHMUP that debuted on the Xbox Live Arcade.  Later that year the game made its way to PC and other consoles including the Vita – the Vita version was even offered for free for PS Plus members – so there is no reason that anyone who loves super-difficult arcade shooters shouldn’t have played this by now.

If Sine Mora somehow slipped under your radar during the past five years THQ Nordic is bringing this classic back to the PC with all-new features and enhanced 4K graphics.  Even better, if you already have Sine Mora in your Steam library you’re going to get Sine Mora EX for free – check your library…it’s already been upgraded and definitely worth revisiting.

Back in 2012 Sine Mora blew me away with its stunning visuals and excellent retro shooter action that hearkened back to my days growing up in the arcades playing games like Defender and Zaxxon. Over the next 40 years I would play many more shooters of the vertical and horizontal nature, but none of them have ever come close to achieving the amazing visuals Sine Mora brings to the screen, and with the exception of Ikaruga, none have ever been this difficult. 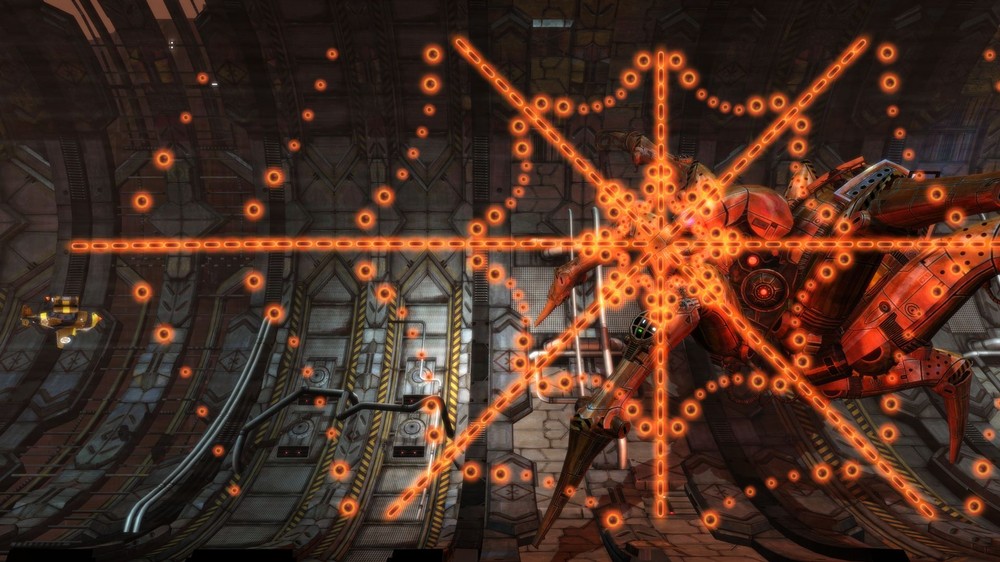 Sine Mora EX dazzles you with production values normally associated with AAA releases. The level of detail in design, textures, and background art was already second to none and the new EX upgrades take it even further, often creating distractions that will get you killed as you marvel at the intricate visuals while overlooking that incoming pattern stream of weapons’ fire.  The new EX version also adds a 16:9 aspect ratio (versus original 16:10 which is still available) to better fit widescreen monitors, as well as improved rendering and native 4K graphics support in stunningly smooth 60fps for those with the rig to run it.

Combined with a fantastic score composed by Akira Yamaoka that blends adventure, action, and a hint of danger, you have quite the cinematic shooter here, especially when the game manages to seamlessly blend these sweeping 3D camera moves and autopilot sequences between the action shooting parts. And if you don’t care for these, simply squeeze the left bumper to fast-forward through them.

Sine Mora EX has several unique mechanics that sets this shooter apart from anything else in the genre. First is the time mechanic whereby every enemy you shoot puts extra seconds on the diminishing real-time clock. Rather than taking damage, when you are hit the clock ticks down faster, and if it reaches zero before the checkpoint its “Game Over”. Time can also be slowed down by using the right bumper, and this is an effective tool in dodging complex streams of enemy fire or quickly repositioning your ship to target a vulnerable spot on one of the incredibly complex and massive bosses designed by Mahiro Maeda. You have a limited amount of this ability, and even though it can be refilled with power-ups, you still need to use it strategically so you have a bit stashed for the final boss fight in each mission. 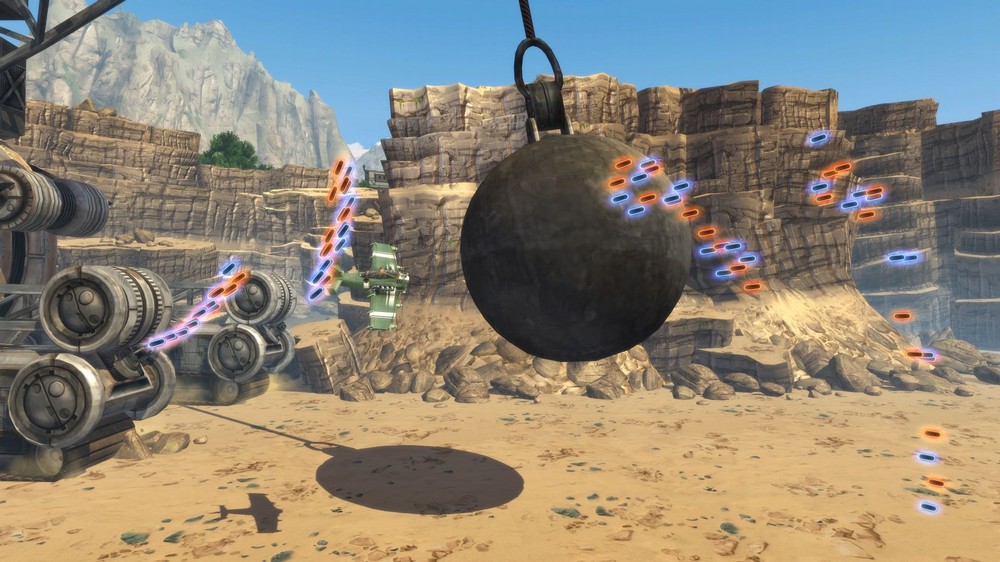 Speaking of power-ups, there will be all sorts of floating orbs that materialize from the debris of your exploded enemies. These can give you secondary fire abilities, refuel your time bank, add bonus points and most importantly, increase the power of your primary weapons. As you collect red power-ups your primary weapons become increasingly deadlier and can even adapt to new patterns of fire, but should you take damage ALL of your current power-ups will detach from your ship and you will have to quickly recollect them. Think of it as Sonic getting hit and losing his rings. You have precious seconds to collect your lost red orbs as they float to the four sides of the screen, all the while having to dodge enemy ships and incoming fire.

Each level has a certain ship assigned to it in story mode and once beaten that ship is unlocked for selection in the arcade mode so you can try other ships in other levels. Ships each have their own unique weapons and you can create over 50 powerful combinations to fit your own play style. Sine Mora EX is brutally difficult. Early on you will be given the option for the Novice or Advanced path, which is a nice touch until you realize that Novice is just delaying your frustrations for a few extra levels. There are seven stages and I have yet to finish the final stage, even after five years of trying.  I’ve even brought in other staff members who are much better at these shooters and none of us can get through this final stage. 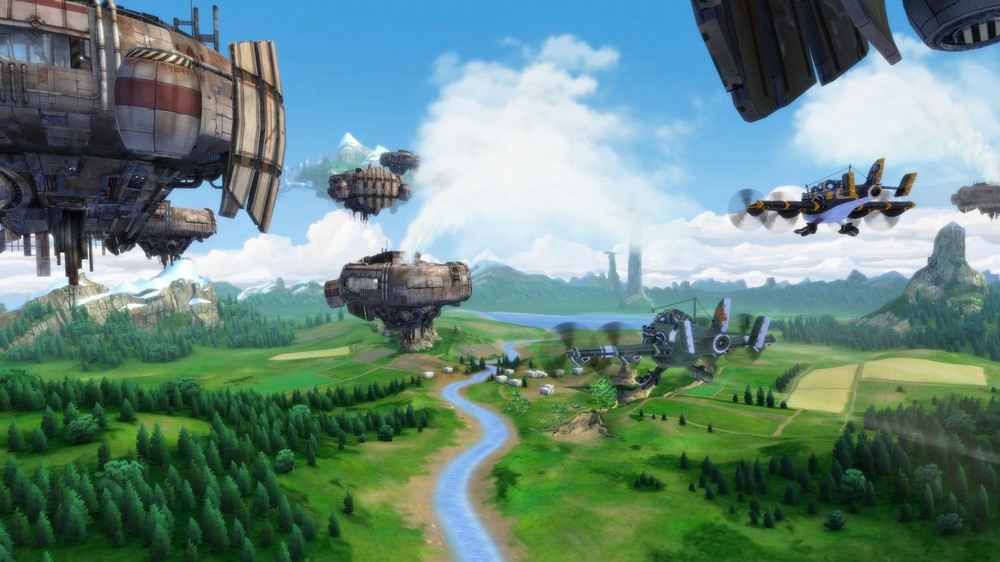 Sine Mora EX offers some new ways to play, which will certainly extend your enjoyment of this addictive shooter.  There is a new local co-op for the Story mode as well as three new Versus modes; Race, Tanks, and Dodgeball as well as new Challenge levels.  Once you complete a level in the Story mode you will unlock all associated challenges and a Boss practice mode for that level, so there really are a lot of new ways to approach the game in this updated version.

My complaints are few and minor and aside from the overwhelming difficulty that could easily be fixed with a “super novice mode” that allowed for infinite continues or just a reduced difficulty, my only other issue is the Mature rating that might be limiting the potential audience for the game. With new English voice overs the profanity-peppered script is even more awkward.  At least in the original game all spoken dialogue was in Hungarian (still available in options), and you had to read the subtitles to catch all the cursing. Given the charming and colorful nature of the game, it’s a shame something as inconsequential as dialogue from a poorly written and unnecessary script turns an E10 game into an M rated title.  For some reason, the most needless weapon in this game’s arsenal is the F-Bomb, and the designers drop it frequently, even twice in the same short sentence.

Sine Mora EX is a fantastic shooter that will provide endless hours of addictive gameplay, first as you simply try to finish the game, then as you hone your skills and starting working on raising your letter grade for each chapter and start competing for high scores on the game’s leaderboards as well as trying to earn all those achievements. This is old-school action with a 21st century facelift and a game that no skilled and patient shooter fan should skip. 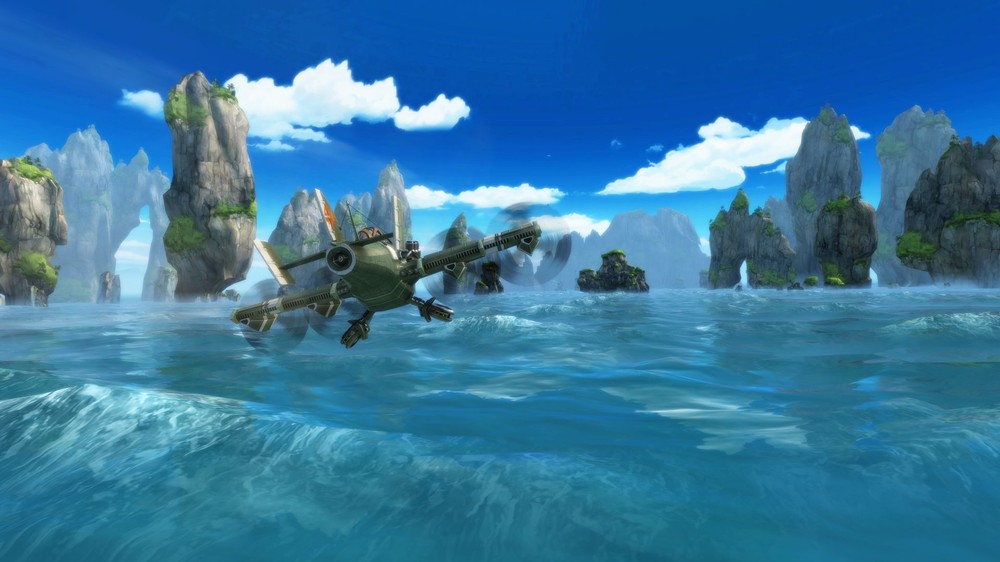 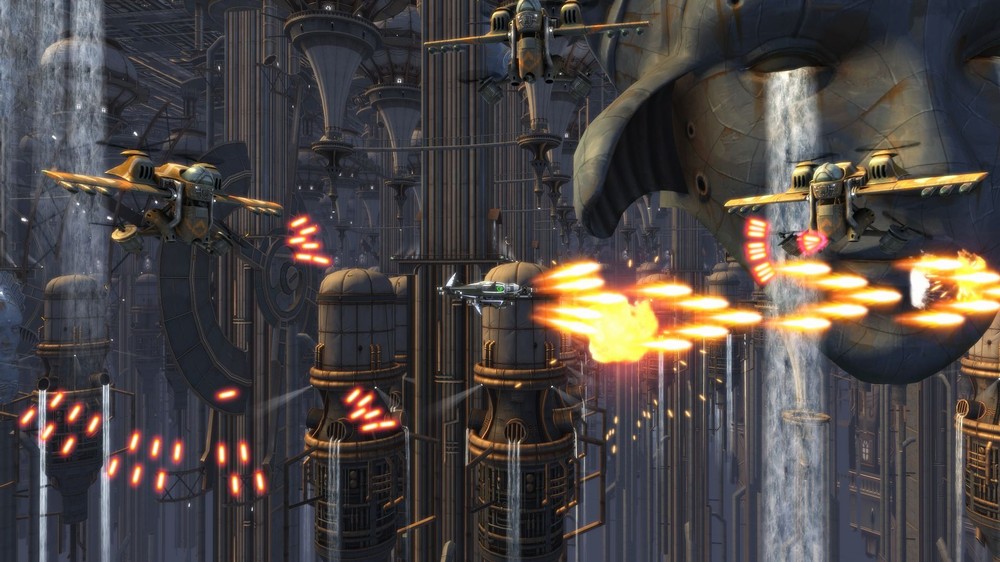 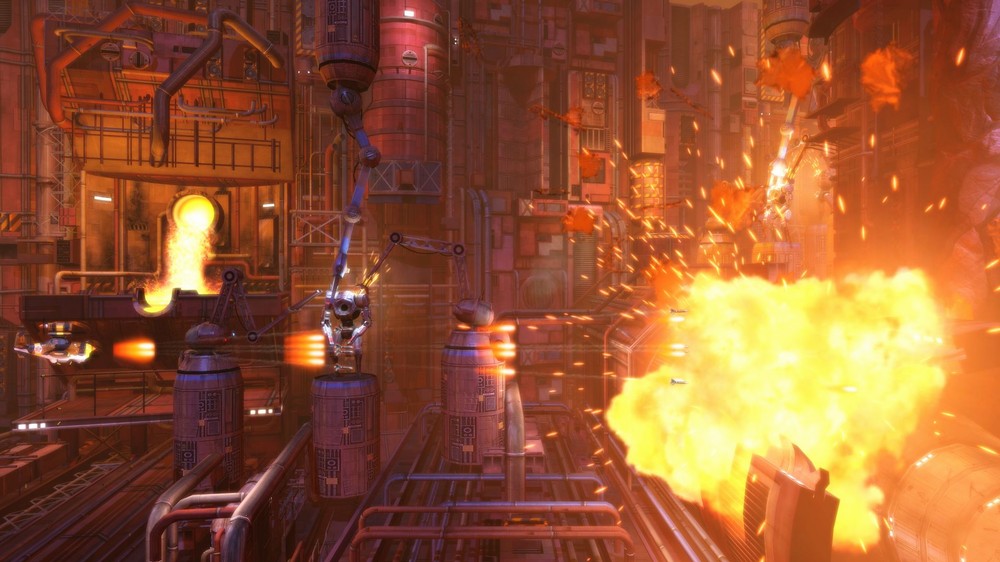 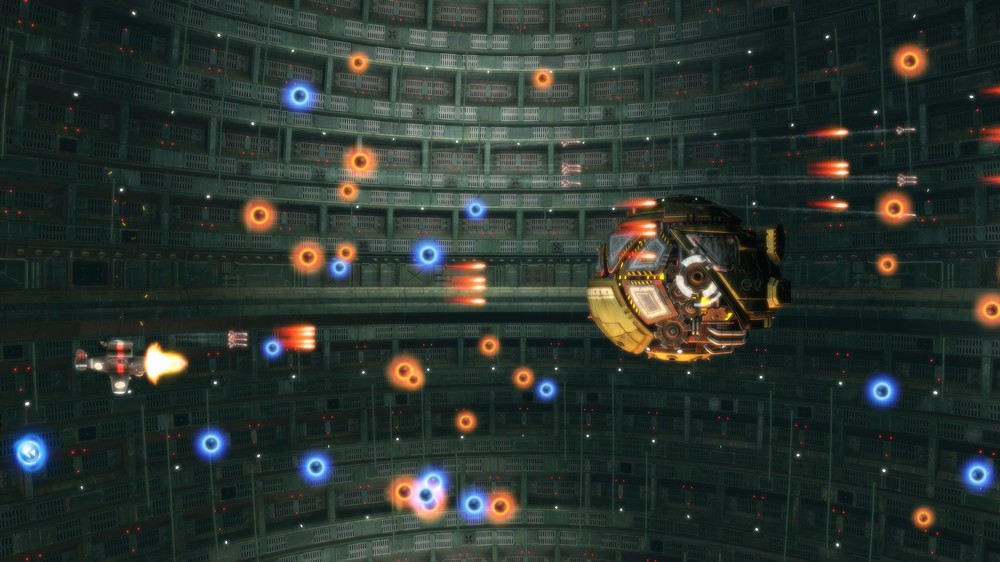 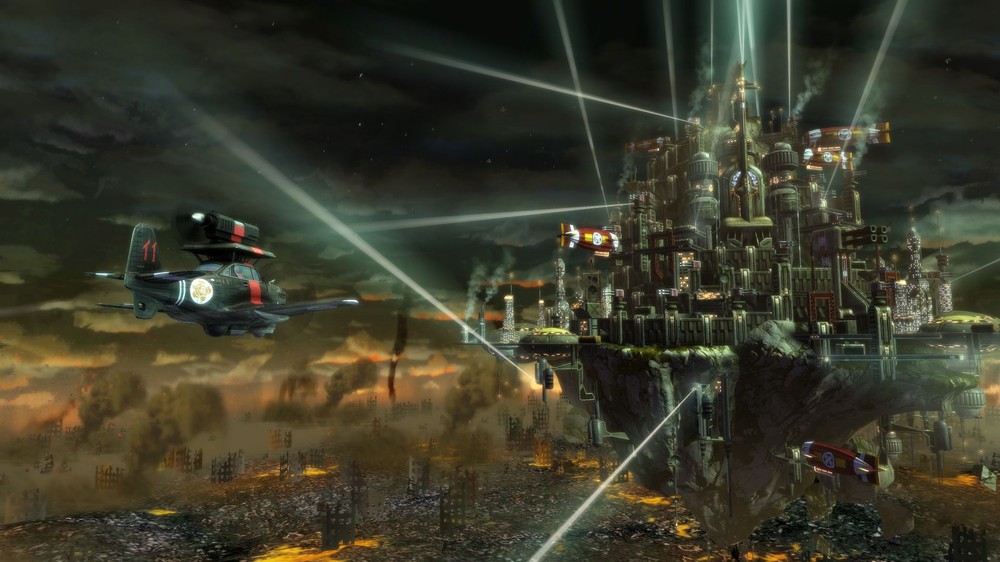 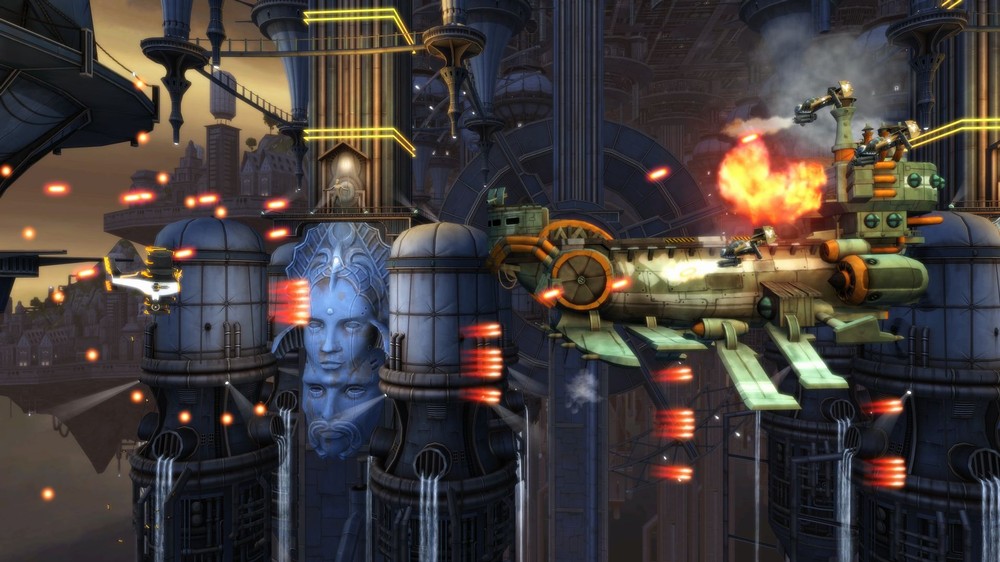 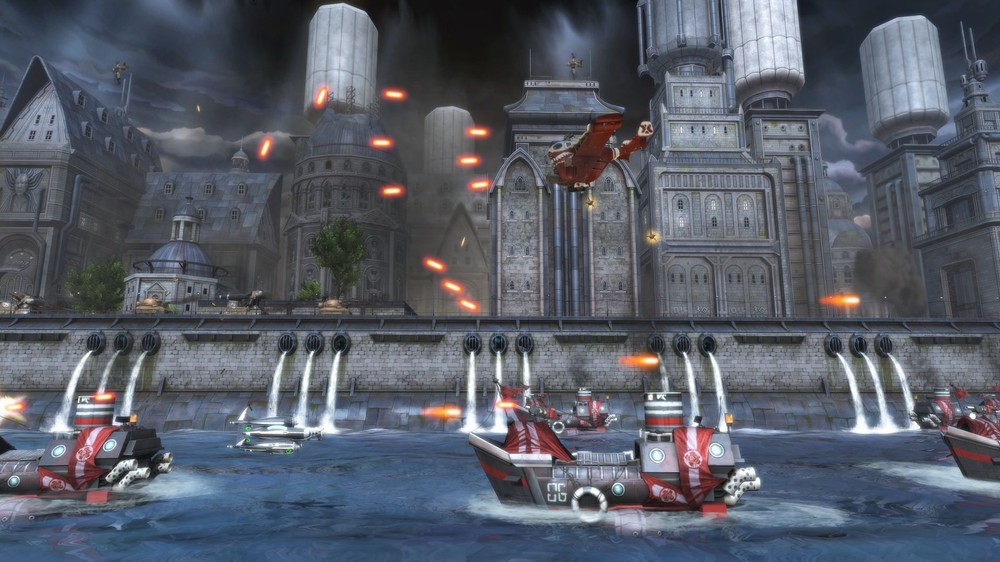 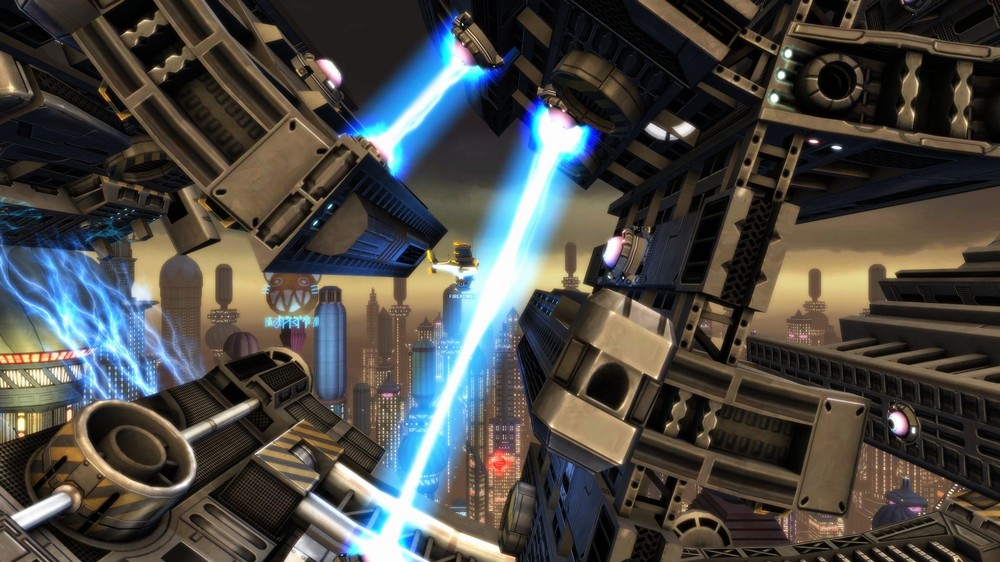 1, 2 player local co-op and versus