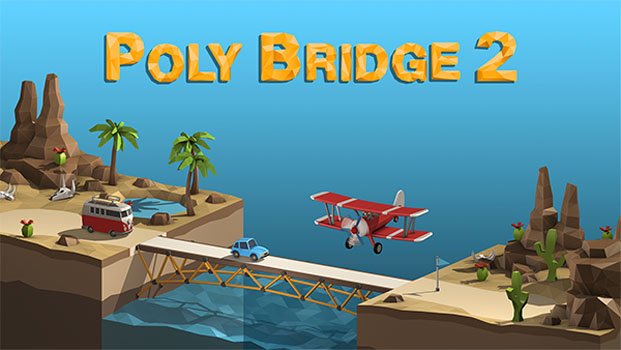 A challenging, rewarding puzzle game with charming presentation and design.

Prior to playing Poly Bridge 2, the only times I had been tasked with keeping a bridge structurally sound was in the hands-on sections of museums devoted to science and technology. However, armed with the recollection from my time at high school that triangles are the strongest shape, I waded into this world of fantastical engineering, ready for whatever would be thrown at me. Poly Bridge 2 tested my bridge-building abilities over four different worlds and through more than sixty different scenarios, and it has to be said that I came out the other side feeling like I had learned something.

Perhaps the greatest strength of Poly Bridge 2 is how user-friendly the interface feels, even if it might initially feel a little too much like something you would encounter in an office-based work environment. There are a number of great touches, from the squared background that allows you to better judge angles and placement of object to the use of keyboard shortcuts to quickly delete and undo any mistakes. Once you’ve been playing for only a short while, you’ll be able to quickly fly around the screen with minimal frustration, which is an excellent inclusion in a game of this type. When you’re so reliant on getting what’s in your mind out on (virtual) paper as quickly as possible, you want to have the minimum of obstructions in your way, and Poly Bridge 2 does its best to accommodate this. 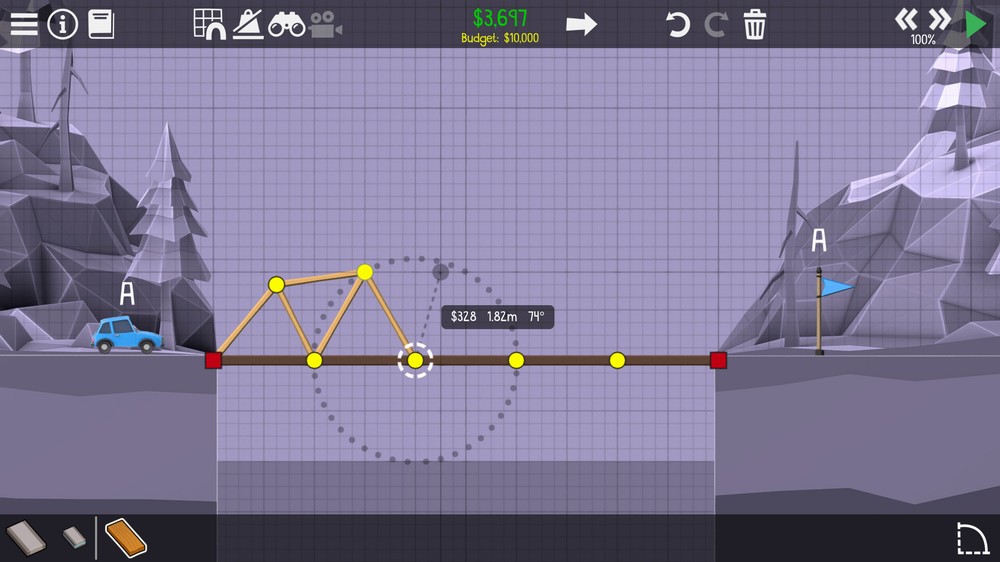 The other factor that I enjoyed was that Poly Bridge 2 doesn’t take itself too seriously, which works strongly in its favor. Aesthetically, environments and vehicles look as if they’re crafted from paper, and there’s a great use of color that makes everything, including the building materials, look distinct from each other. Even the music goes into creating a pleasant environment, with guitars and a general indie soft-rock backing track allowing you to relax perhaps a little more than the scenarios would otherwise allow for. I found these accommodations particularly important, especially during some of the tougher levels when I just couldn’t figure out why my bridge was collapsing, or what sequence I needed to set up to get every vehicle across safely.

Thankfully, there is a lot of player feedback that encourages you to push through any tough points, and gives you good reason to return to scenarios that you might not have nailed every objective on. Poly Bridge 2 is more than happy to point out specific areas of your bridge that are causing it to collapse, and while this doesn’t give you the exact solution to your problem, it pushes you in the right direction by giving you an area to focus your efforts on. Of course, once you start dealing with a multitude of materials and components this becomes a little more difficult, but the point is that Poly Bridge 2 does what it can to help. Once you’ve finally managed to beat a level, if you’ve missed an objective such as going over budget, Poly Bridge 2 is happy to show you a selection of solutions devised by other players, which gives you a chance to learn from other attempts and maybe pick up a few tips that will help you further down the line. 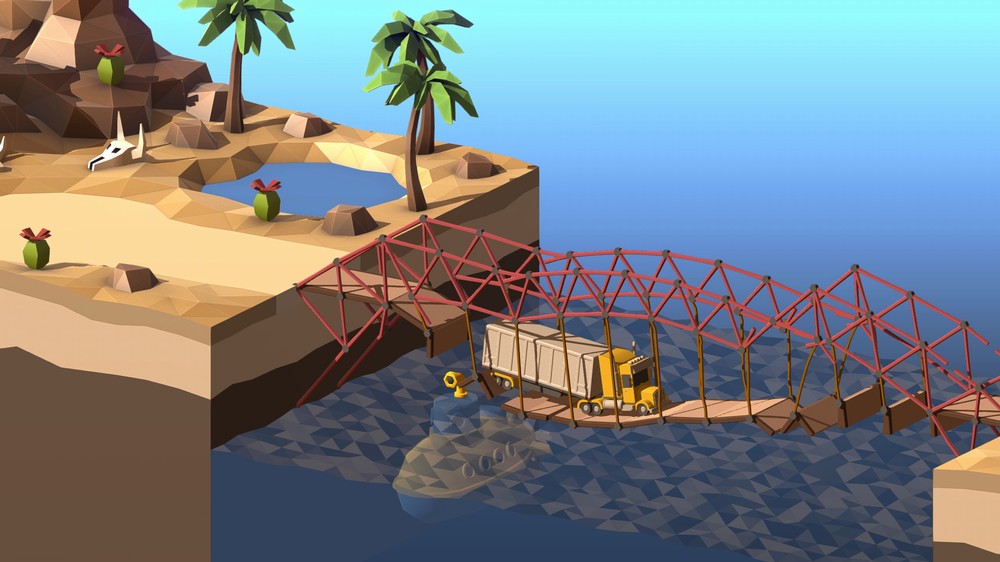 My main objection to playing Poly Bridge 2 is the fact that after a while, it started to feel less like I was playing the game, and more like I was settling in for a session at work. This is always a danger with puzzle games, but I felt it particularly strongly here, and I had to be in the right headspace to launch the game. I think that for me it’s the fact that there’s no narrative padding to break the scenarios up, and once you get into the latter stages, a lot of brainpower is required, and after a long day at work I just didn’t have the mental faculties to puzzle out where I was going wrong. As mentioned before, there’s a lot that the game does to remedy this feeling, and while I’m not attempting to argue that Poly Bridge 2 is anywhere near the same level as actual engineering, it’s still a game that I couldn’t really relax to. Despite this, the feeling of getting a working bridge is great, and I can definitely see myself taking on a couple of scenarios here and there when the mood strikes.

Poly Bridge 2 is the kind of title that I can see strongly appealing to a particular audience, much like sports management simulators, though it does strive to welcome a larger crowd, especially with the level of streaming integration that is present. It does a lot to make the experience as user-friendly as possible, and with the number and variety of scenarios that it presents, there’s a lot to do here for a player that enjoys the challenge and the satisfaction of building a successful structure. It doesn’t deliver an easy experience, with the difficulty ramping up reasonably quickly, but Poly Bridge 2 tries to alleviate this by trying to show you where you’re going wrong without explicitly giving you the answer to your issues. If you’re looking for a game that will tax challenge you mentally but leave you on the other side feeling like you’ve learned something, then Poly Bridge 2 is well worth a look. 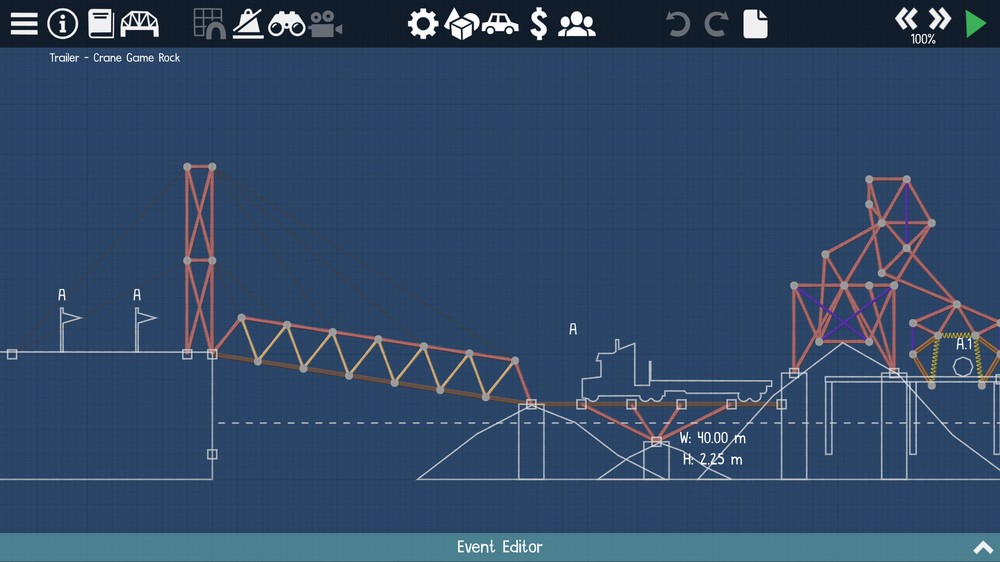