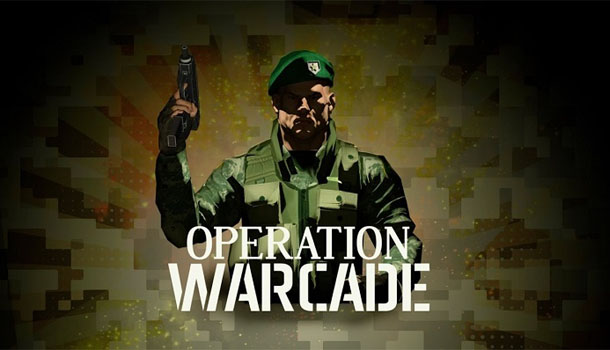 Operation Warcade for the PSVR has released a retail version of the game that originally launched in April on the PS Store, so we thought we would check it out. First off, I have to confess to being a huge fan of the 1987 arcade game Operation Wolf; one of those classic light-gun coin-op cabinets that drained more quarters and tokens than I care to count. Operation Warcade brought back instant memories of those days spent in the arcade, even before I started the actual game.

I was delighted with the front-end interface of the game that puts you inside a virtual arcade. Even though you are locked in place in front of the Operation Warcade machine you are surrounding by other vintage arcade cabinets, many of which have animated players playing the games while fans cheer them on. There is even an Agent 47-style character who looks more like a maître d’ than an arcade attendant. What is particularly fun is that the more you play and the better you do you will start to attract your own crowd of diverse fans that are cheering you on from all sides. 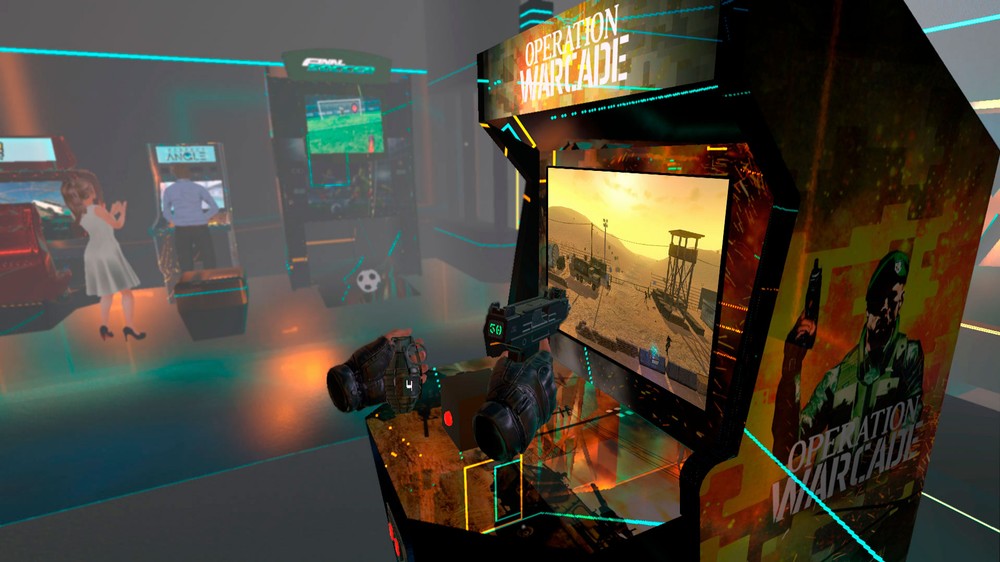 To start the game you simply reach out and grasp the gun and fire at the screen to pick your level and stage. You are then transported into one of those sit-down arcade machines where you are inside a large cabinet with a giant screen in front of you which is your window to the battlefield. It’s pretty cool actually because you can lean forward and look through the window to either side to see advancing troops. From that point it is basically a perfect VR reconstruction of a classic light-gun game where you aim at soldiers, APC’s, choppers, boats, drones, and even try to shoot fighter jet missiles out of the sky before they destroy your cabinet.

To mix things up there are immersion points you can activate by shooting icons and transporting yourself into the game fully. These take away the 2D window and put you in the driver’s seat of an APC or the cockpit of a jet or behind the mounted turret on a riverboat. You might find yourself behind some sandbags on the battlefield or perhaps peering through a fully functional sniper scope to pick enemy targets off a distant hillside. There is a nice mix of weapons that you can switch to by shooting their icons ranging from shotgun, bow, twin Uzis, and a sniper rifle. There is even a crazy gravity gun that lets you suck up enemies and vehicles right up to the screen then repel them with extreme force back into the environment. 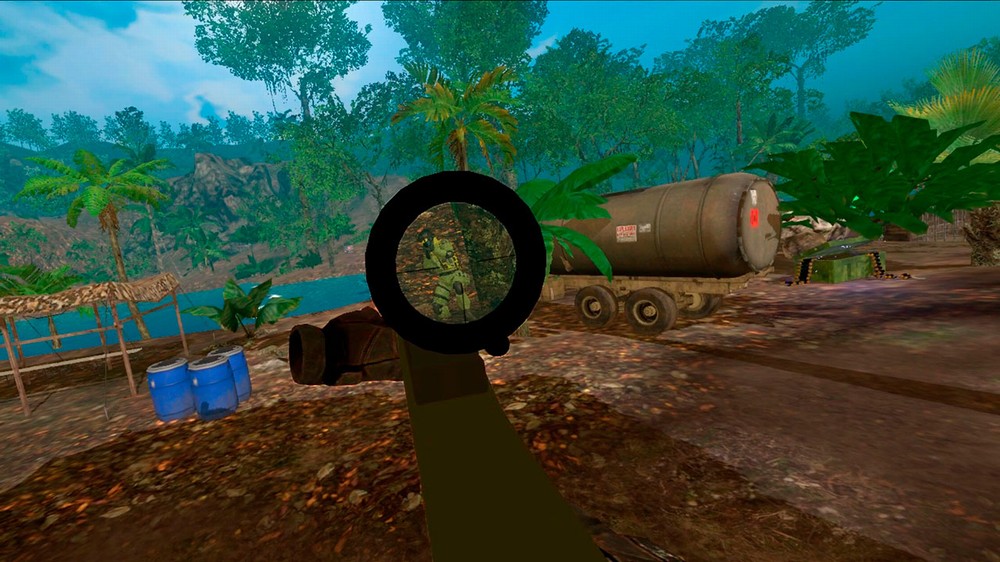 Each stage has three bonus objectives or challenges that award you with bonus stars. These stars are used to unlock future stages, so if you aren’t getting three stars on the early levels you may have to go back and replay some stages before you can advance. These challenges range from killing so many people with a grenade to a certain number of headshots or shooting down x-many drones, etc. One of the more difficult challenges was freeing POW’s that were locked in cages because if you missed the lock you often killed the prisoner.

Operation Warcade offers several ways to play but only one way if you plan to win. Casual players can jump right in with the DualShock 4 which works well in most situations. It has flawless aim tracking and you can even toss the occasional grenade with the left trigger. The game also supports the PS VR Aim controller, which makes the game physically more immersive simply by the way you are handling the plastic weapon in real-life, and it tracks just as good as the DualShock 4, but if you want the ultimate immersion you are going to have to use a pair of Move controllers. There are two reasons; the first being that you can properly dual-wield weapons now that your two virtual hands are no longer bound together, so when you get those dual Uzis you can spray towards both sides of the screen. The second is that there is one challenge early on where you are asked to grab a vehicle with the gravity gun and shoot the driver while holding it. This simply can’t be done with any control option other than the Move; at least none that I’ve found.  Even grabbing and aiming a mounted machine gun is difficulty with anything other than the Move controllers. 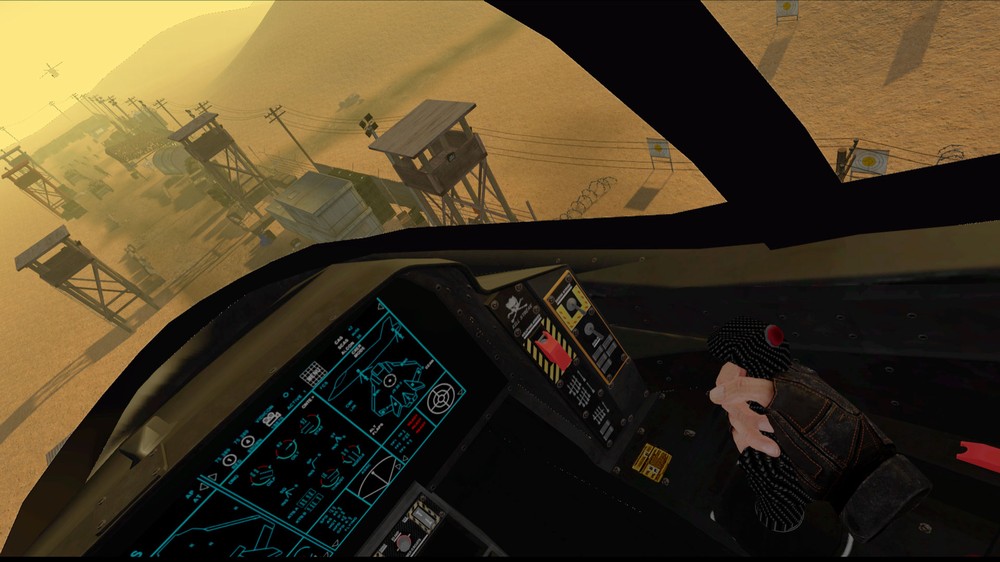 Operation Warcade is so much fun and brought back so many fond arcade memories and I would probably play it a whole lot more except for the simple reason that the graphics are horrible – some of the worst I’ve experienced on the PSVR. The game is plagued with jagged edges and there is so much shimmering and pixel crawl it was like my headset was filled with water.  I kept telling myself, “It still looks better than Operation Wolf on a 1987 CRT”, but that didn’t keep me from getting nauseous after 20-30 minutes. I was even playing on a PS4 Pro, but there were no options for boosting resolution or anti-aliasing.

It’s worth mentioning that the game is also available on Steam for PC and supports both Vive and Rift and there is even a free demo. I tried that and the game looked infinitely better and even played better with the Oculus Touch or Vive wands. I will likely be continuing my Warcade experience on the PC. Given the choice I would recommend that version highly, but if your only VR option is the PSVR then this version will do. 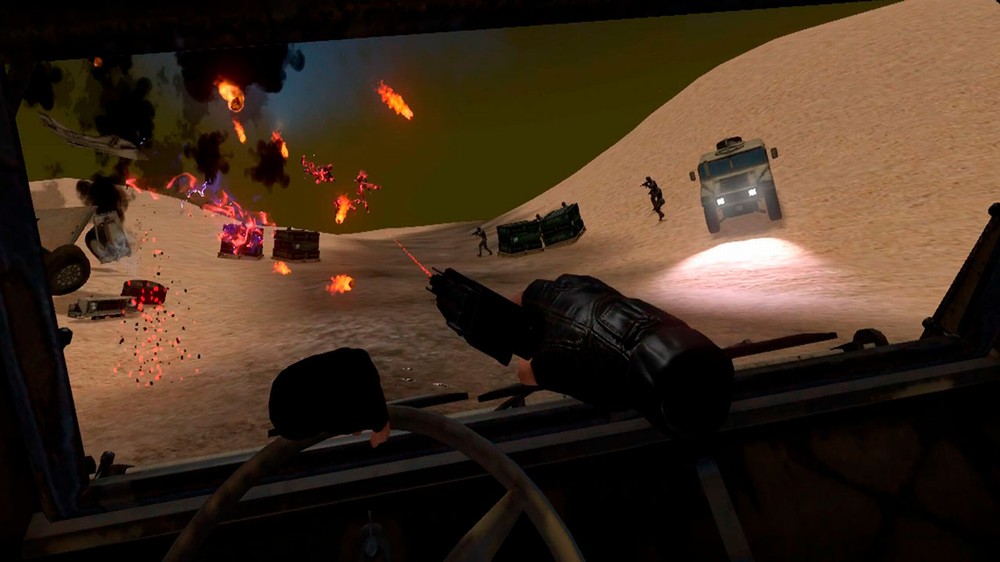 The audio portion of the game is quite effective with great surround sound to help you know which side of the screen a chopper is coming from, or you might hear the subtle whine of a drone. I love all the little voice overs from some Rambo-style dude who comments on your multi-kills and there is fun music and even some arcade ambience between levels.

Operation Warcade is highly replayable, both in collecting more stars to advance to new stages as well as trying to beat your previous scores. You can play the Classic mode with six levels and a boss fight or you can go for the deep dive and tackle 108 missions across 36 levels. Completing stages will unlock plenty of upgrades, making you more deadly on future levels or when replaying old missions.

I really enjoyed Operation Warcade. It is a game perfect for VR, and the precise controls and multiple views and weapons make it so much fun to play. I just wish the graphics were better, because that and the fact that Move controls are required for certain parts of the game are the only things holding back my recommendation and score of this game. If you are a fan of light-gun games or just want a casual arcade shooter then this might be for you.  Operation Warcade is available on the PS Store and in North American retail now. 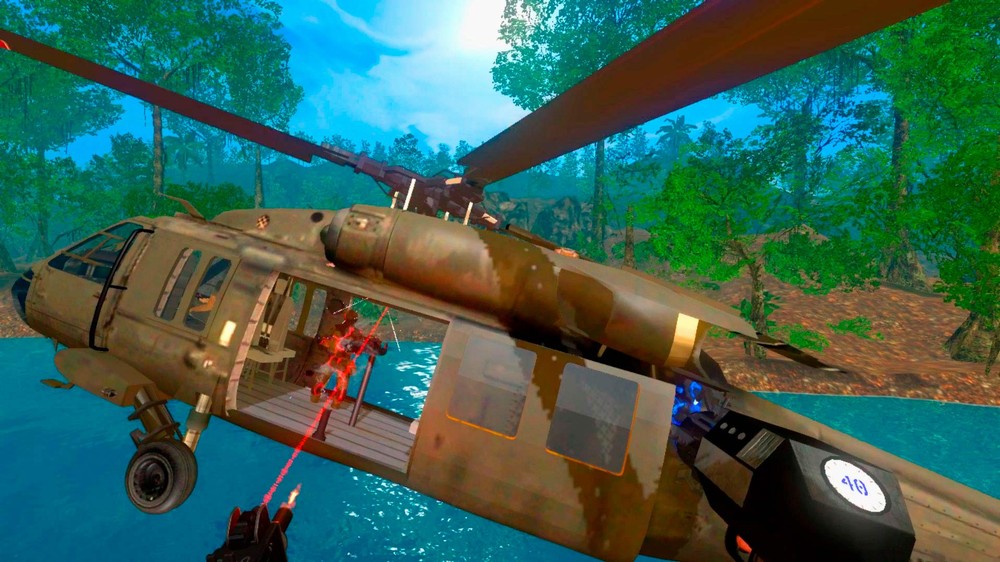 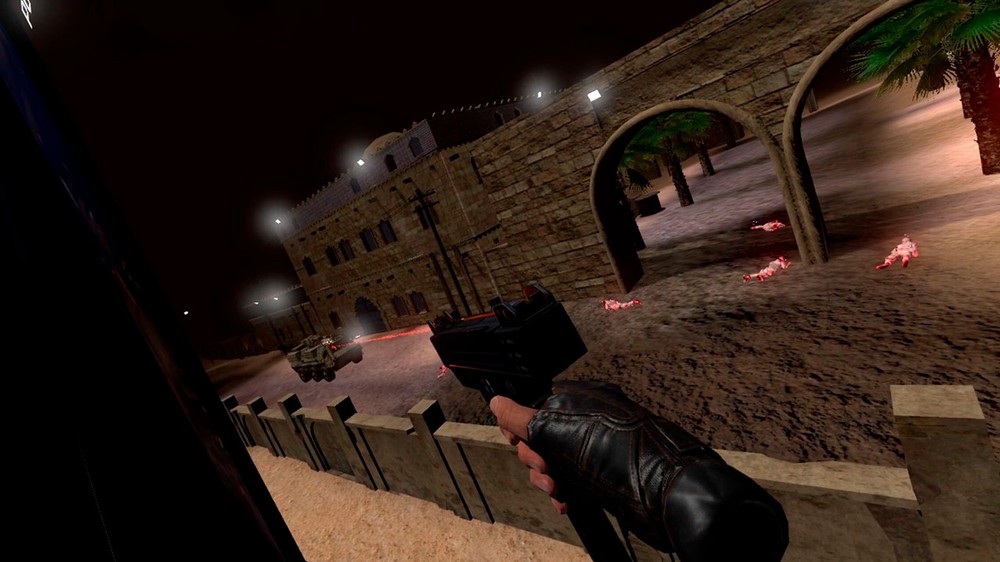