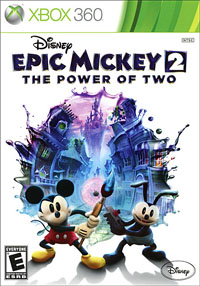 I have to admit I was pretty excited when I learned that the sequel to Epic Mickey was coming to next-gen consoles. The entire time I was playing the Wii-exclusive original I kept telling myself how much better this would be in HD with better controls…or at least a better camera. Having spent much of December playing both the 360 and the Wii U versions of Epic Mickey 2: The Power of Two I’ve come to learn the truth in the saying, “be careful what you wish for.”

The sequel stumbles right out of the box by making this game heavily reliant on information and story content that only players of the Wii original will be privy, but it doesn’t stop after the opening intro. The game continues to alienate franchise newcomers time and time again, as nonstop references to people, places, and events are tossed around like common knowledge. It’s been close to a year since I played the original and I was struggling to remember a lot of this information. I can’t imagine someone coming into this with a blank slate.

As the name implies, Epic Mickey 2: The Power of Two is designed heavily around co-op adventuring, which is all fine and dandy assuming you have someone ready to play with you for the endless hours you’ll need to invest in the game and don’t mind splitting your screen. We’ll get into the troublesome controls in a bit. Player one is Mickey while anyone who picks up a second controller can drop in or out as Oswald the Lucky Rabbit. Mickey continues to use his paintbrush to unleash paint and thinner with fire hose imprecision to either restore or erase the word around him, while Oswald zaps things with electricity or uses his helicopter-like ears to airlift Mickey around annoying platform levels. 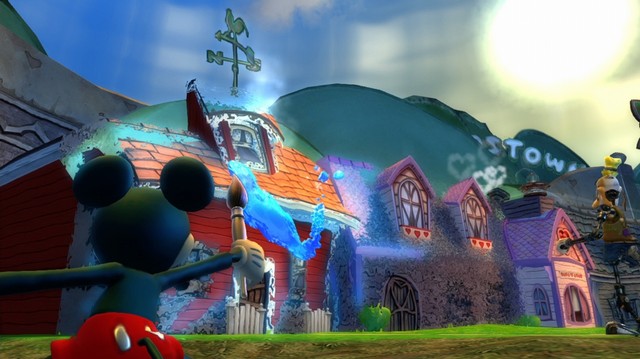 If you attempt to play the game alone you may be better off splitting the screen and controlling both characters at once as the AI driving Oswald is pretty pathetic. He will continually get stuck on architecture or refuse to follow you to a specific area. In one level I had revealed a chest and needed Oswald to fly me to the ledge, but he would not join me from the jumping-off point, so I had to grab a controller, manually move him to my ledge then drop out of the game so the AI would finally fly me to the chest. Clearly, if you want to go for all the collectibles and secrets in the game you had better bring a friend.

The world of Epic Mickey 2 is impressively large and complex which makes the lack of any guidance whatsoever completely unforgivable. You are continually given quests or told to talk to a certain person or go to a certain shop and then left to stumble around the colorful landscape in search of these obscure waypoints. There are no icons, dots on a map, or dotted line showing the way. Early on I was told to go get a camera from the camera shop on the other side of the earthquake crack and I spent the next hour wandering the area looking for the shop, going in and out of every other possible shop but no camera shop. In complete desperation I jumped into the sewer and somehow magically arrived in a new part of town that was home to the camera shop. When a kids game is so poorly designed that a 30+ year gaming veteran is ready to toss the controller and the game out the door I can’t imagine what little kids are supposed to do. The game does offer a map view, but even it is so vague it is of little use. 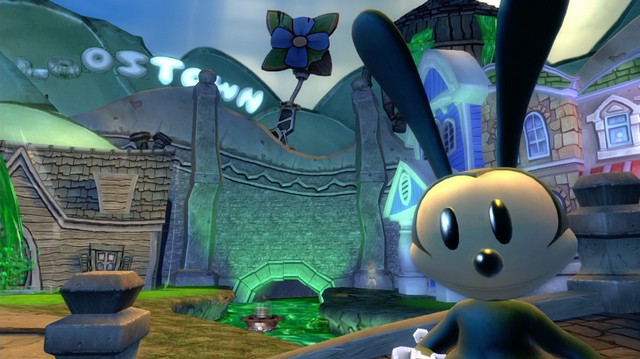 While I enjoyed the visuals of the Xbox 360 I really missed the tactile feel of aiming my “brush” using the Wiimote, so I’m guessing the PS3 and its use of the PS Move make for the best HD experience. Gamepad controls are extremely stiff for moving and sloppy for aiming and the camera, while better than the original, still has plenty of problems that will often lead to missed jumps and missed connections when trying to hitch a ride with your partner. The camera loves to swing down low and behind and will fight you as you try to position it higher to try and actually make a jump. Of course your camera is also your aiming unless you decide to switch to a first person view, but then you can’t move.

This all translates into rather bland combat that may or may not require Oswald to stun an opponent so you can thin them out or paint them into friendship. Ultimately, you’ll avoid combat or simply run past enemies rather than tolerate the poor controls required to fight them. Boss fights are even worse, especially playing alone since many fights are designed around having the boss attack Oswald while Mickey attacks the boss, but in solo play the AI pretty much keep Oswald in close proximity to Mickey making him the shared target of any boss affections. 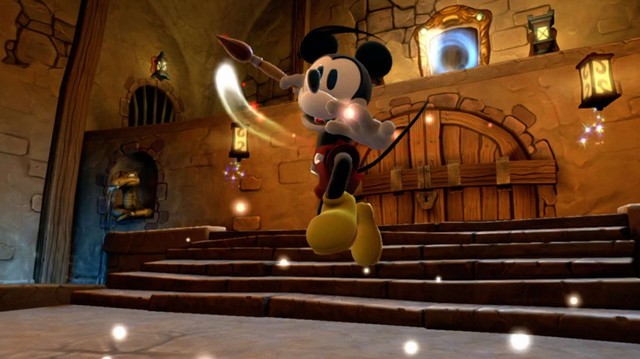 Epic Mickey 2: The Power of Two is a pretty game to be sure, both its HD gameplay graphics and the stylized storyboard panels used to create the animated cutscenes. There are also great sound effects and some classic Disney music including many of your familiar themes blended into the score. The voice acting is “authentic” Disney which also means it is extremely annoying and for some reason many of the throwaway lines are repeated to the point of insanity. And if you ever step away from the game make sure to pause or mute or Oswald will drive you up a wall with his urging to get back to action. And love it or hate it, Epic Mickey 2 brings music into the game with a singing mad scientist who only speaks in song.

The sequel expands on the original ideas with talking characters, a much bigger world that will take 20-30 hours to finish and twice that to complete. New inks are added to the mix and there are numerous side quests and even some RPG elements, but none of it ever comes together in anything coherent or even enjoyable. It’s just a bunch of loose content tossed into a Disney theme park that you’ll stumble around trying to check off.

I love animated platform adventures, and I was really hoping Epic Mickey 2: The Power of Two was going to join the ranks of Jak and Daxter and Ratcher and Clank, but with its awkward camera, jerky controls, and directionless gameplay, I can’t really recommend this game to anyone but the most devoted Disney fan with infinite patience and a friend who shares that passion. 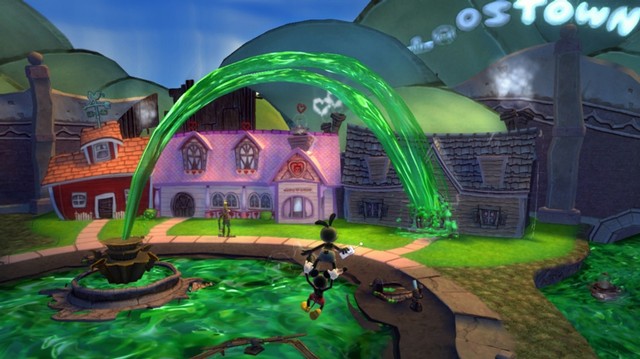 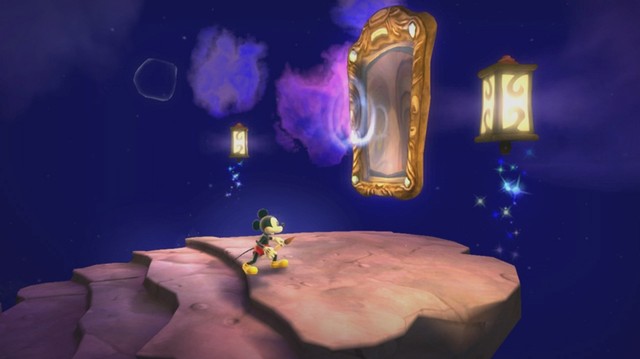 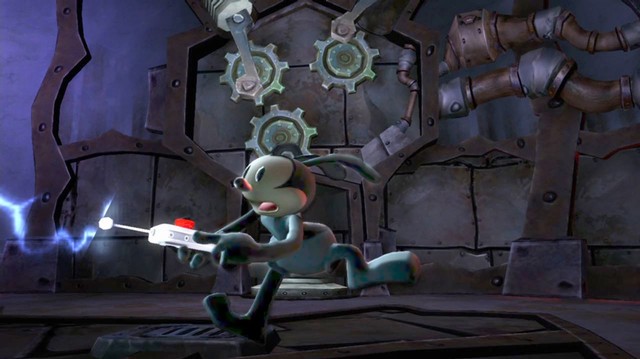 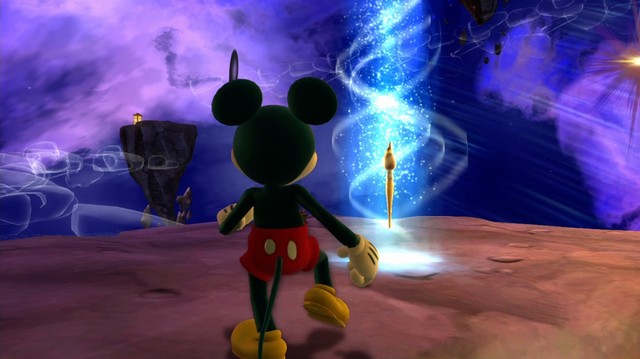 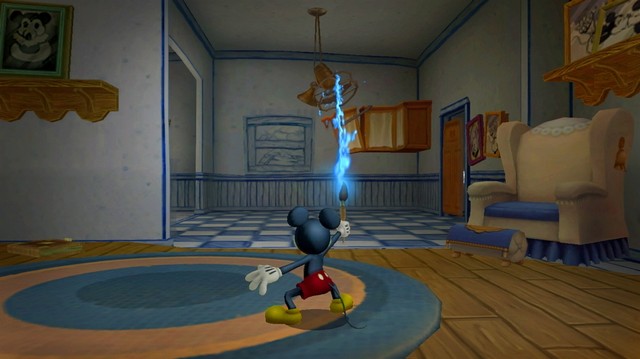 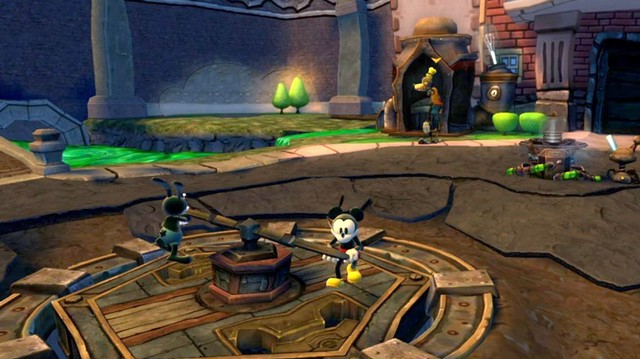