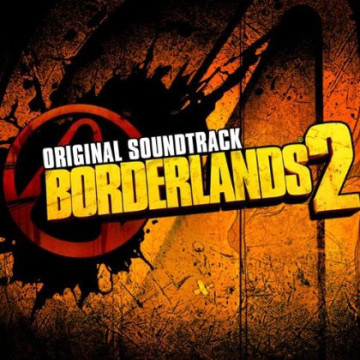 As video games continue to get better and better with each new release so do their soundtracks. There have been some truly remarkable scores releasing alongside these AAA titles, and video game soundtracks are easily catching up to movie soundtracks in both quality and popularity. Personally, I’m a huge fan of soundtracks since most of my listening time is either in the car or while sitting at my computer working, and in the case of the latter, I really need music without lyrics.

I’ve stated in past reviews that listening to a game soundtrack is a great way to relive the original game experience, but in the case of Borderlands 2, this is just a kick-ass CD loaded with awesome music that I would listen to over and over again regardless of whether it was tied to a game or not. I’ve only had this CD for a few days now and I’ve easily listened to it at least a dozen times. I have the tracks ripped to my PC and copied to both my iPhone and iPad, and I keep the disc in the car, and play it whenever I’m driving somewhere. There is something so epically masterful about this compilation of music that I’m pretty sure I could listen to it for the rest of my life. In fact, if my life had a soundtrack, I think this is the music I would want.

I knew the moment I heard the opening track to Borderlands 2 that I was in for a real treat, and that track (Ascent) wasn’t even created by Jesper Kyd. Kyd is responsible for about half the tracks on this disc while Cris Velasco and Sascha Dikiciyan take credit for the other half. Raison Varner takes credit for the 19th track (Bandit Slaughter). Despite bouncing around between various composers, the soundtrack has a slick seamless quality to it, even when you switch from an energetic thumping almost tribal track to something with a more western vibe. Some tracks are more ambient and subtly tweak your mental and emotional state while others can cause you to seriously violate the speed limit if listening to while driving.

Unlike most of my music reviews I have yet to finish the game that inspired the music, but I am eagerly anticipating reaching the parts in the game that will have me hearing these awesome tracks once again. Some of the music is so vibrant and even DJ-like in an underground rave kind of way that I can’t even imagine what will be happening in the game when I do.

Borderlands 2 has quickly shot to the top of my list of all-time favorite soundtracks, movie, game or otherwise. The music is so good and so diverse it will fill you with the energy of a six-pack of Red Bulls and when you hit the last track you will welcome the first, so you can begin the ride all over again.

You can purchase your copy from Sumthing Else Music Works, Amazon, or digitally from iTunes or any other digital music site, and I highly recommend you do. One listen to this CD and it will become the soundtrack to your life as well.