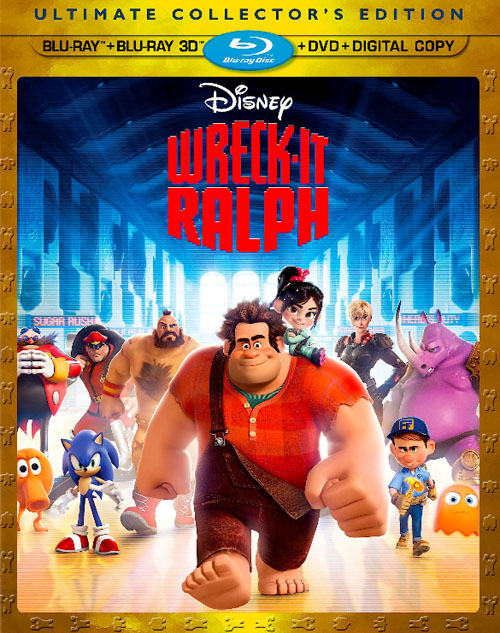 Wreck-It Ralph 3D is easily my favorite animated Disney feature of all-time, but then again, this movie was written specifically for me…or at least it seems that way. As an avid videogame enthusiast for the better part of the past three decades and someone who grew up spending all their after-school time in the arcades, and someone who even got a job in the local pizza/arcade parlor because I got free tokens it’s safe to say that I have played pretty much every major coin-op game released since the original Space Invaders and Asteroids. I probably could have (and should have) consulting on the making of Wreck-It Ralph, although after six viewings of the film I can’t think of too much the filmmakers left out in this fiendishly clever tribute to videogame and geek culture.

The setup for Wreck-It Ralph is brilliant and reminded me of an idea pitch I made when I was working at Sierra Online back in the early 90’s about how all the characters in all of the Sierra adventure games got mixed up on a fragmented hard drive and started appearing in each other’s games. In Wreck-It Ralph the concept is similar in that all of the arcade machines are interconnected via their power cords with the surge protector acting as a Grand Central Station that connects all the games together. So when the arcade closes down for the night all the video game characters can take a break from their “day job” and head over to Tappers for a frosty mug or make their way to the center of Pac-Man’s maze for a bit of group therapy.

It is just such a therapy session where we meet the hero (and villain) of our story, Ralph (John C. Reilly). This lumbering 9-foot behemoth is the Donkey Kong equivalent in the aging arcade game, Fix-It Felix Jr., which I suppose makes Felix the unspoken Mario. In his game Ralph terrorizes the occupants of an apartment building by smashing the place up while gamers use the joystick to control Felix and his magic hammer as he climbs around making repairs. Every night after the arcade closes Felix goes to his penthouse apartment to hang a new gold medal on his wall and party with his friends while Ralph retires to the local dump where he sleeps on a bed of crumbled bricks to dream of a better life.

On the eve of their game’s 30th anniversary Felix (Jack McBrayer) is hosting a big party with fireworks and cake and Ralph decides to show up. Things don’t turn out so good, and it is made quite clear that he is the “unwanted bad guy” and should not return unless he can win a gold medal of his own. As he is telling his sad story to the bartender in Tapper a frazzled soldier from the game Hero’s Duty staggers into the bar and Ralph hears him mention something about a gold medal. Ralph ends up commandeering the man’s battle armor and jumping games – something extremely forbidden in the unspoken rules of arcade society. Not only is death permanent outside your own game, with Ralph no longer in his own game Fix-It Felix Jr. has been slapped with an Out of Order sticker and is doomed to be removed from the arcade.

After a terrifying game session of Hero’s Duty, Ralph does manage to acquire his coveted gold medal and exits the game in an out-of-control escape pod where he ultimately crash lands in another game, Sugar Rush; basically Mario Kart with a heavy candy coated theme. Unfortunately, things only get more complicated from here as Ralph has brought along a dangerous Cy-bug that, outside its own game rules, can potentially invade every other game like a virus and destroy the entire arcade, but not if Sergeant Tamora Jean Calhoun (Jane Lynch) has anything to say about it. She, along with lovesick Felix, who can’t get over her “high definition facial textures”, track down the Cy-bug while Ralph embarks on his own adventures with Vanellope von Schweetz (Sarah Silverman), a quirky little game glitch who aspires to be a champion racer.

Wreck-It Ralph is heavily targeted to fans of videogame culture, and this may just be the first Disney movie to lack that universal appeal. Whereas most any other Disney movie can suck in both kids and adults, Ralph’s appeal lies solely in the wink-wink-nudge-nudge for those that get the countless references whether they be a visual sight gag, a random video game character appearing in the background scenery, the inputting of the infamous Konami code to unlock the secret vault, or even other non-gaming pop-culture references. Sure, we all get the joke that the cops are donuts, but let’s face it. If you don’t know going into this movie that dropping a Mentos into a Diet Coke equals explosive results then there is a huge plot point of the film that will be completely lost on you.

Whether you get the jokes and references or not, Wreck-It Ralph has heart and tells a surprisingly emotional and relevant tale about one man’s dream to aspire to be something more than the label placed upon him by society and one girls dream to reach for the stars despite overwhelming obstacles, bullies, and peer pressure. As expected, everyone gets what they want and lives happily ever after before the credits start to roll, and the expectations of a sequel are not entirely unfounded, although with arcades being all but extinct, I would think that any sequels would have to involve home video games and connecting characters via the Internet.

Wreck-It Ralph blew me away in theaters and the Blu-ray is even better with a stunning 1080p/AVC 2D and 1080p/MVC 3D transfer that will dazzle you with or without the 3D glasses. As you might expect given the subject matter, colors are rich and pop off the screen – literally in the 3D version. Great care was taken to keep the various 8 and 16 bit graphics true to form when viewing the characters from the real world, but once you slip behind the screen, we get to see these characters come to life in glorious CG, some more so than others. While Felix and his apartment-dwelling friends are all modeled in 3D they still move around in stilted sprite animations that reveal their video game roots. The transitions between game screen and game world are perfectly executed for maximum comical benefit. You’ll see Ralph leave Pac-Man’s therapy session and exit via the 2D maze, stopping to pick up some cherries along the way, then appear in the power-strip transit hub in full 3D with 3D modeled cherries. Or you might see a bar patron call for a refill only to zoom out to the classic screen view of Tapper racing around the bar filling mugs of root beer. The 3D presentation is fantastic with virtually no ghosting or other issues associated with the technology. The 3D is used primarily to create more immersive worlds although there are a few in-your-face moments, but they never feel gimmicky.

Given the simplistic nature of the sound and music in arcade games over the past 30 years Disney has done a masterful job of capturing all the subtle levels of sound design and tech advancement from the classics ranging from Q-Bert speak to the waka…waka of Pac-Man to the thunderous surround sound of a high dollar game like Hero’s Duty. Wreck-It Ralph delivers a powerful DTS-HD MA 7.1 mix that will immerse you in this fantasy world behind the screen with sounds coming from every channel along with some aggressive LFE to punch up the more action-oriented moments. The most memorable sound design moments are the initial attack sequence in Hero’s Duty and the exciting final race in Sugar Rush that make maximum use of surround sound, yet no matter how complex the sound mix, the dialogue track and emotionally fueled score are always in perfect balance.

When it comes to the bonus features of Wreck-It Ralph you can insert the Pac-Man death sound here. What a wasted opportunity. There is so much reference material that needs to be discussed yet Disney cannot even muster a feature commentary or even one of their Second Screen tablet tie-ins. How disappointing. Instead, we get a 17-minute feature entitled, “Bit by Bit: Creating the Worlds of Wreck-It Ralph” that has Director Rich Moore, producer Clark Spencer, writer Phil Johnston, art director Mike Gabriel, co-art director Ian Gooding, effects supervisor Cesar Velazquez, animation supervisor Renato Dos Anjos and a few other members of the team barely scratching the surface of this film. There are also four deleted and alternate scenes with optional commentary, four Video Game Commercials related to material from the film, and finally Disney Intermission, a measly 10-minutes worth of material presented by Chris Hardwick (The Nerdist) who will discuss the jokes and references whenever you hit pause during the film. There are also 10 minutes of trailers for upcoming Disney features and last but certainly not least – the best extra on the disc, Paperman: Theatrical Short, which just won the Oscar as I am writing this review. The four-disc box set includes both 2D and 3D versions of the film, a standard DVD copy and a digital copy that will push your retina screen iPad to the limits.

Personally, for me, this movie is a perfect 5 out of 5, but then again, I take the subject matter very personally. In the grand scheme of things I have to keep in mind that a lot of people just aren’t going to get much of the gamer jokes and insider pop-culture references, and if you don’t get it then this movie won’t interest you despite its other charms. Plus with the disappointing selection of extras one can’t wonder if a bigger and better edition of Wreck-It Ralph is coming at a later date. Even with an amazing audio and video Blu-ray presentation, the lack of content makes this a bit tougher to recommend unless you can find a really good sale price. But if money isn’t an issue and you are somewhere between the age of 30 and 50 and you’ve ever been in an arcade more than once you probably need to add Wreck-It Ralph to your Blu-ray library immediately.