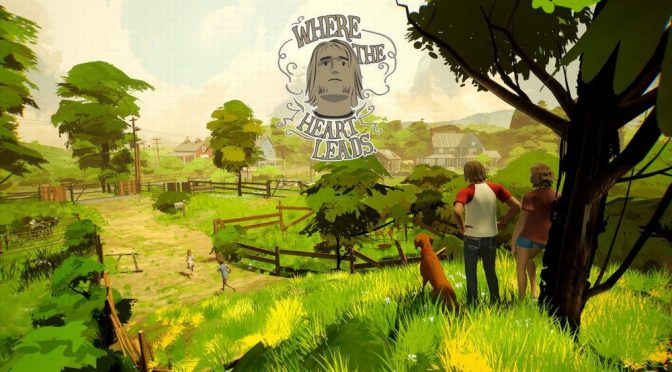 Have you ever reflected on how you came to this chapter in your life? The choices you made, the events that happened to you, and the relationships along the way all brought you to this moment in time. Where the Heart Leads by Armature Studios explores this retrospective type of narrative through a surrealistic art design, engrossing soundtrack, and memorable characters. Striking a balance between surrealistic dream-like settings and serious subject matter, this narrative adventure game aims to make the player emotionally invested in the protagonist’s lovable yet flawed family and then make decisions that ripple out to real-world consequences. With only a few shortcomings, game director Todd Keller and the team at Armature excel at telling a story that sticks with you for days after the credits roll. 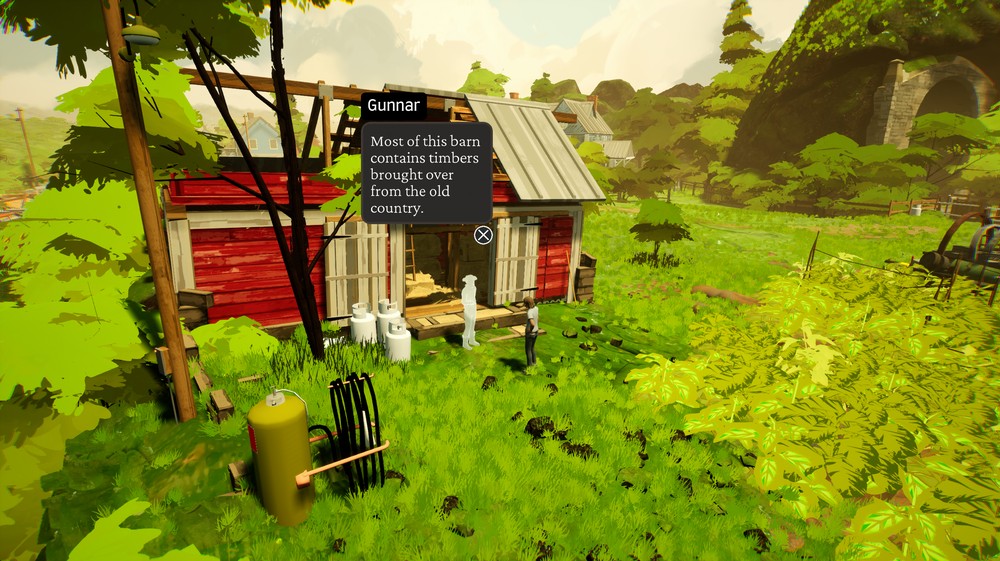 You play as Whitney Anderson, a husband and father of two, who attempts to rescue his dog from a spontaneous sinkhole that has just opened up in his front yard. After tumbling down the enormous chasm, Whit is faced with all the memories and decisions he made throughout his life. Large and small, each fork in the road has a relational cost and emotional benefit. This is a true narrative adventure game as you’ll spend most of your time speaking with people and making the occasional decision, eventually leading to a major fork in the road for your life, career, relationship, and so on. Most chapters also feature a building mechanic as you are a craftsman and artist who feels the pull to earn a paycheck without selling your creative soul to the highest bidder. It’s gratifying to see what your character can build and tear down, but this is little more than a button prompt mechanically. Each chapter can range in completion from 10 minutes to 3 hours, the latter being if you enjoy exploring each nook and cranny hunting for collectibles. There is no chapter select option from the main menu, so if you want to go back and see what other decisions may lead to, be sure to save often. 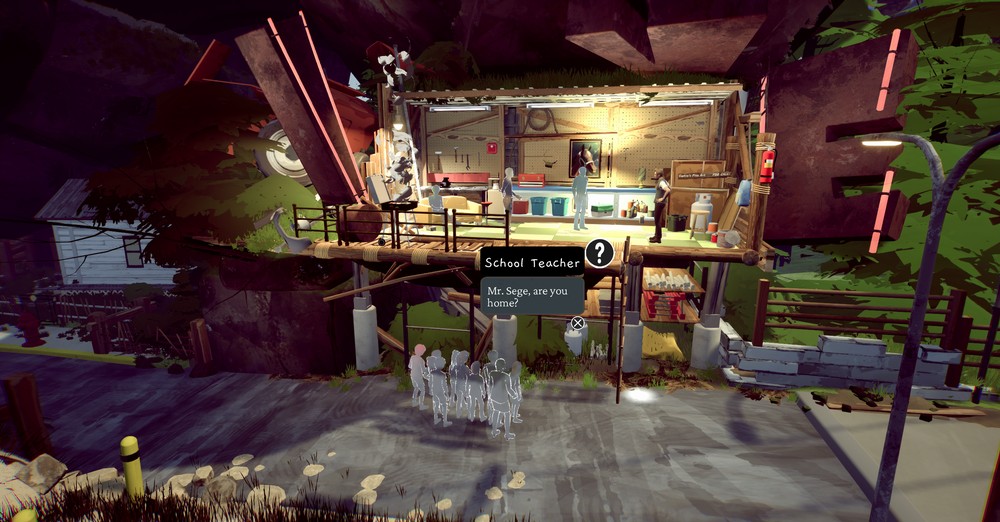 The art design of Where the Heart Leads is excellent, with a beautiful vibrant color palette, fitting soundtrack, and attention to detail. Small touches like changing the font of characters’ names within their respective word bubbles give a unique flair to each personality. None of the dialogue is voiced in this game, so if you don’t enjoy reading quite a bit of text, steer clear. The expressive soundtrack complements the visual design of the flowing grass and natural shadows. There is a distinct style of colorful shapes and detail that flows together with the weather and atmosphere making it fun to leisurely explore.

This slower pace made me embellish my time with each new setting. Most major decisions will be centered on what you as a professional craftsman and artist should construct. Will you choose to build a corporate and functional sign for your client, or will you choose to make a statement that potentially upsets people but is truer to the way you see the world? Your older brother, Sage, represents the artistic struggle to create authentic and honest art but has nobody appreciate such bold and eccentric creations. You’re often put in the middle of conflicts or decisions where you’ll either be the appeasing peacemaker who tries to stabilize the situation or the fire-stoker who goes along with his brother’s schemes. 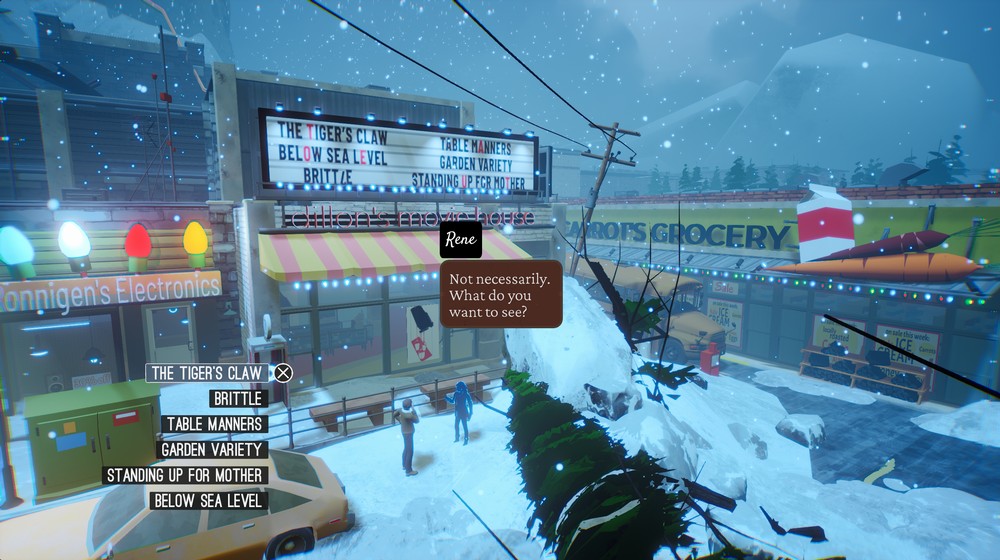 There are a few major themes woven through the entirety of the game: family conflict, relational fulfillment, and wealth inequality to name a few. The game is never preachy and always poses these conflicts as complex and multifaceted rather than villainous and sinister. I understand that doesn’t exactly sound like broad appeal. (It’s not Indiana Jones running away from the bolder with the treasure in hand.) However, Armature handles this more mature subject matter well and respects that it’s not always easy to know the right way forward. Where the Heart Leads largely delivers on its goal to have you participate in Whit’s self-examination while promoting similar thoughts for yourself; however, it’s not without faults.

I never experienced any crashes or noticeable frame stuttering, and the game largely ran without skipping a beat. I did however have some graphical issues playing the game, particularly with window reflections. In attempting to further the surrealistic and dreamy atmosphere, the game renders reflections with bright blossoms. The technique is largely effective; however, more than once, I was unable to see the button prompts, doors or items to interact with because of how dominant the reflections were. Couple this with a camera that you sometimes have to wrestle into position, and I was pulled out of the experience a few times. Playing on a PS5 via backwards compatibility, I tried disabling HDR and adjusted my TV’s brightness, but I still ran into this issue. It’s also worth noting there are no video settings to adjust this within the game. 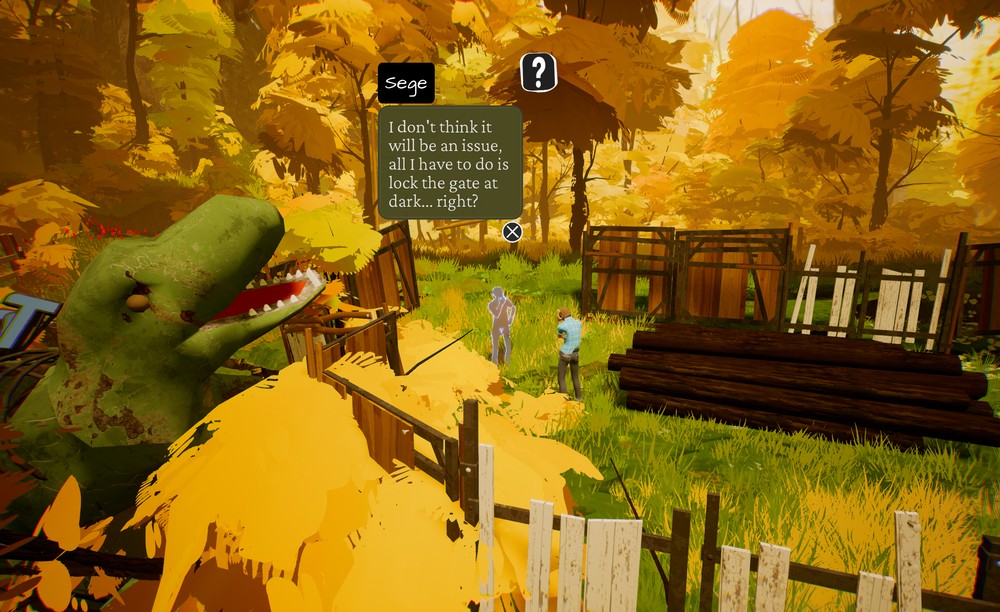 I will also point out that in a few of the longer chapters I felt unclear what my main objective was. I understand this game was never intended to have a rigid quest structure, but a quest-log would have gone a long way. As it is, your journal is a repository for any environmental storytelling objects you pick up along the way. That being said, this gap never undercut the overall enjoyment of problem-solving, building my next project, and wanting to see what happened in the story.

After 14+ hours the credits rolled for the first time, and I was left feeling emotionally spent in a good way. Just like the pangs of loss after a good book or your favorite show, Where the Heart Leads didn’t leave me feeling elated or let down, but thoroughly satisfied. Its slower pace and well-written personalities made me feel invested in these characters’ lives. I wanted my family to finally get a break and my brother to make a responsible decision. At times the emotional momentum was stalled by the indirect nature of the gameplay, but never for too long. My hope is that Armature Studio will take another stab at this universe and be a bit more judicious with their dialogue to keep the player’s attention more on track. Between the well-rounded characters, emotive soundtrack, and dreamy art design, Where the Heart Leads is an endearing story that I’d recommend to anyone who enjoys a narrative-driven adventure game. At the time of writing it is available on the PS4 and PS5 via backwards compatibility and retails for $24.99 USD. 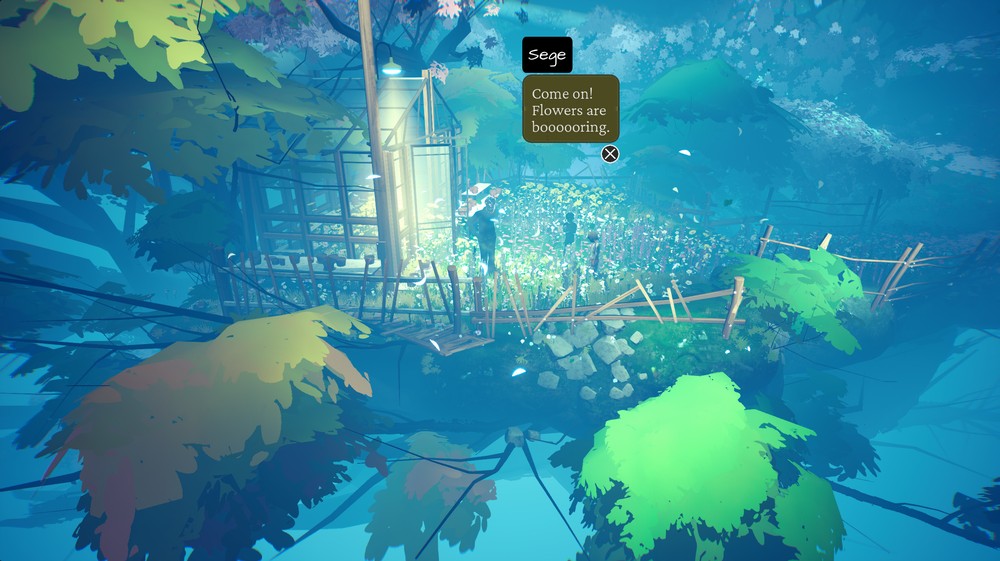 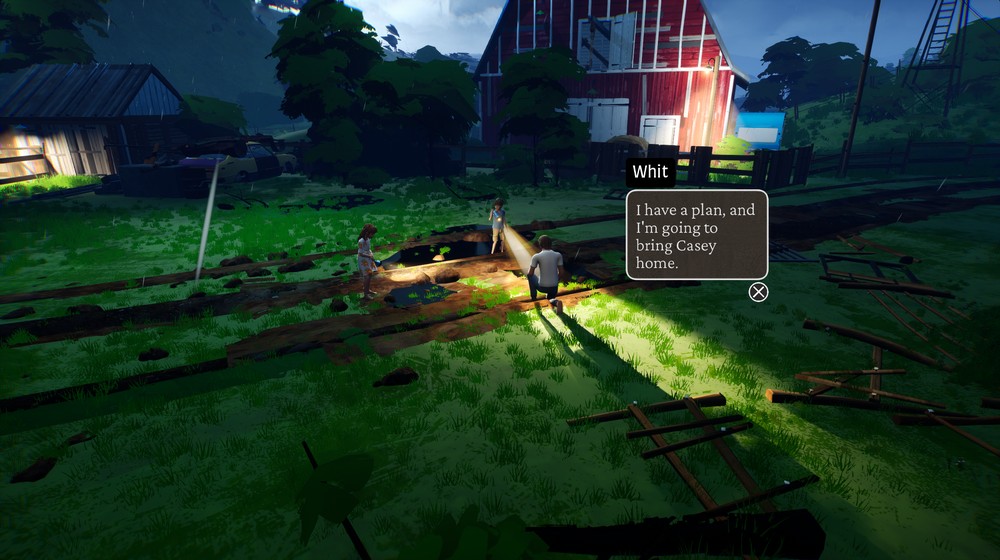 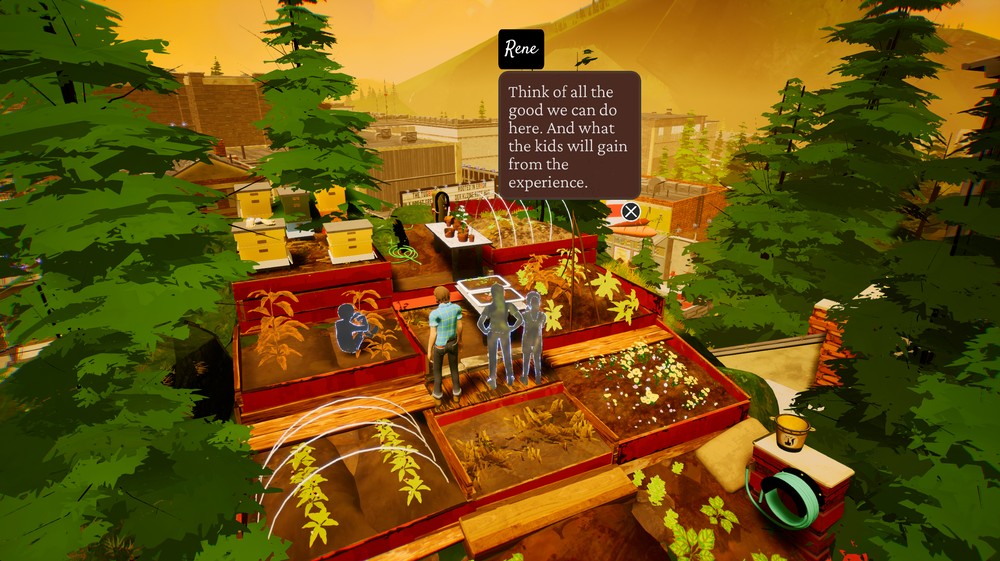 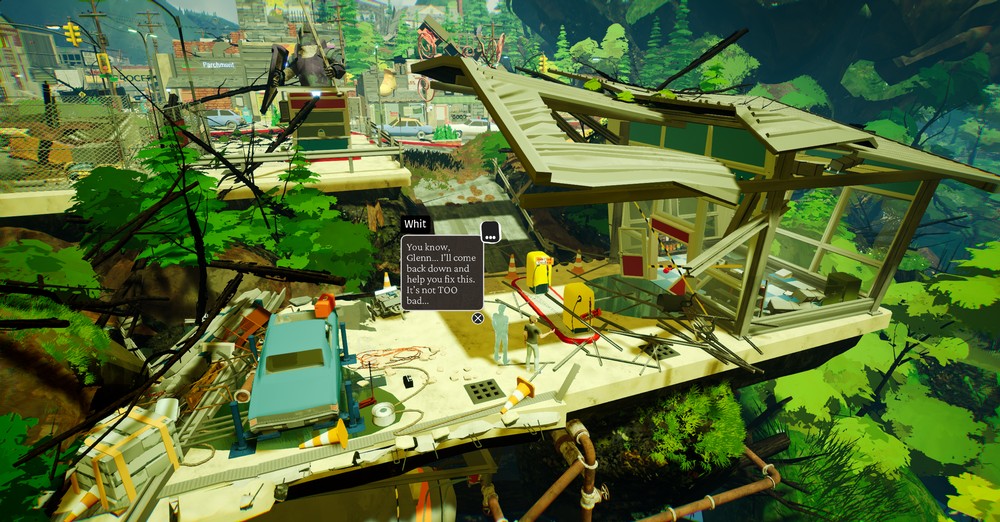 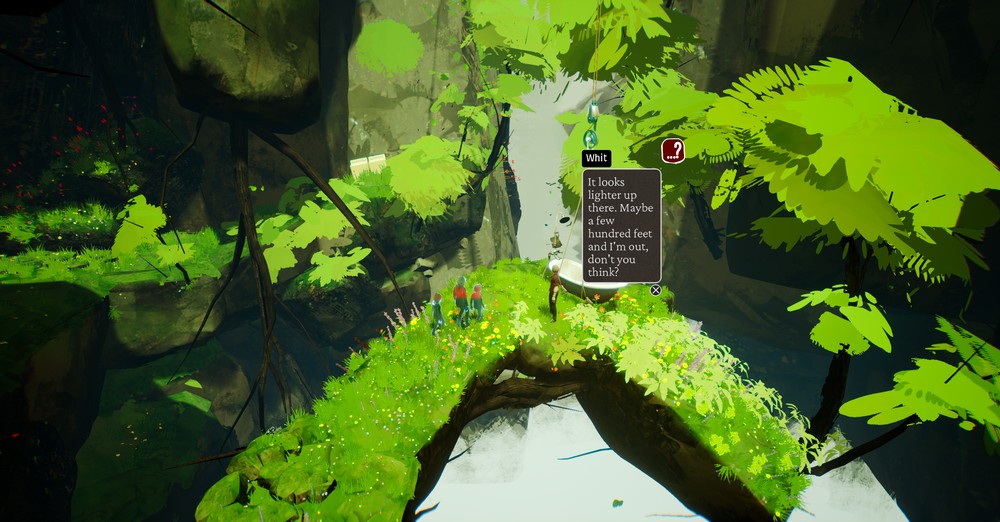 One thought on “Where the Heart Leads Review – PS4/PS5”