VR Invaders takes the generic premise of a sword and shield game and then mixes it up by turning your sword into a laser gun and your shield into a time-manipulating energy barrier. The designers even take the time to toss in a fully voiced story that unfolds between the arcade-style missions; although I really had to force myself to care or even watch the static art panels trickle out narrative while I fought the urge to hit the skip button.   It’s not that the story was bad, and the voice acting was actually above average for an indie game, but this is purely an arcade shooter so why bother?

The setup has you playing Thomas Hall, a freelance hacker in the year 2064 who is trying to rescue a girl stuck in VR. This leads to a lot of pointless banter and exposition between you and your boss.  You’ll need to enter eight arenas and do battle with numerous waves of bots before defeating a larger boss bot at the end of each stage. Your accuracy and speed will reward you with 1-3 stars and allow you to advance to the next stage. 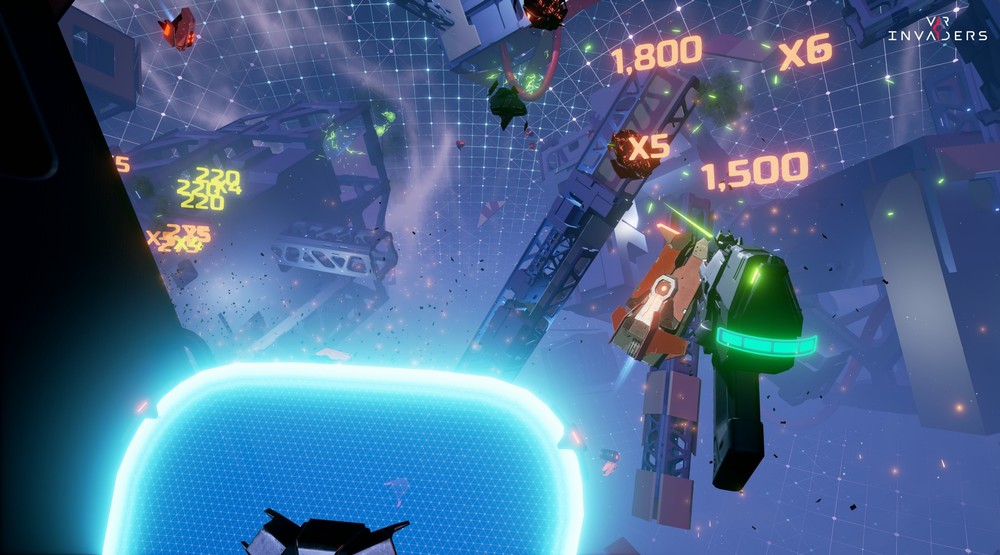 The VR immersion is awesome and when each round begins you find yourself standing on a platform overlooking a high-tech abyss full of lights and panels and portals where flying bots will eventually emerge, flying into the room in Galaga-like patterns. Some are easy takedowns while others have shields and others shoot back their own orange pellets of death that you can deflect with a wave of your shield. Your multi-function pistol allows for rapid-fire, shotgun, blasts, plasma bolts, and several other ammo types that change up throughout each round as you shoot power-ups from the air.

When the enemy numbers start to overwhelm you there is a handy slow-motion trigger on your shield that will freeze enemies where they are and allow you to unleash all sorts of bullet hell upon them. Learning when and where to use this time warp ability is critical in completing stages as well as getting three stars. There is a significant recharge time to the ability, so you need to save it for when it really counts. 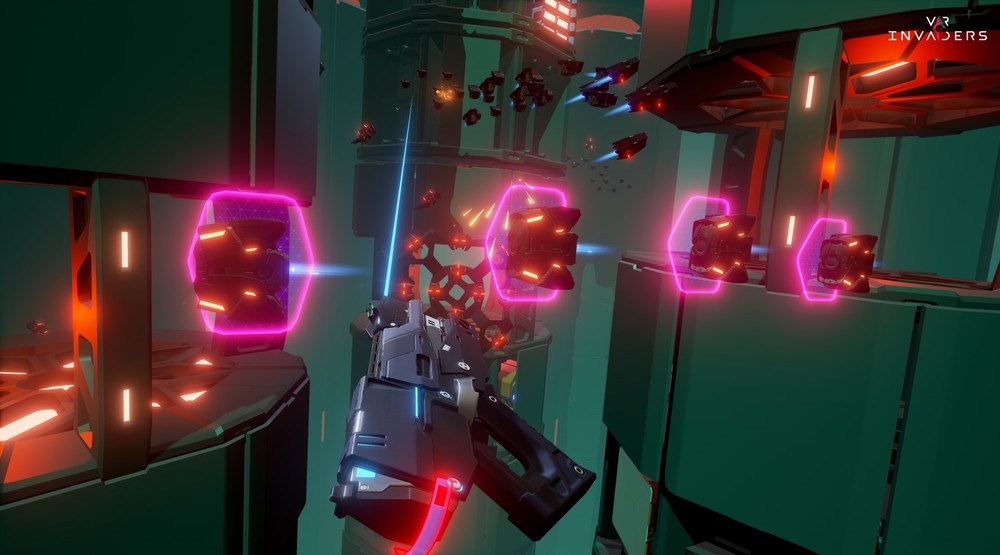 The same goes for your boss fights. One or two good shots from a boss can take out your shield, so you might need to freeze time to allow it to recharge and defend against the next attack, but all the while you need to be firing like a madman at both the boss and any other bots supporting it. There are some pretty cool power-ups for both your weapon type as well as health power-ups, and a cool temporary invulnerability mode that allows you to duel-wield twin blasters until your shield returns. The difficulty progresses rapidly and the final stages of the game are totally insane.

The visuals are excellent with crisp clean environments and nicely modeled bots that fly around with transparent shields and futuristic details. Stepping forward and looking over the edge of your platform is dizzying if you aren’t ready for it. The music and sound effects are excellent and the voice acting is as good as it is unneeded. 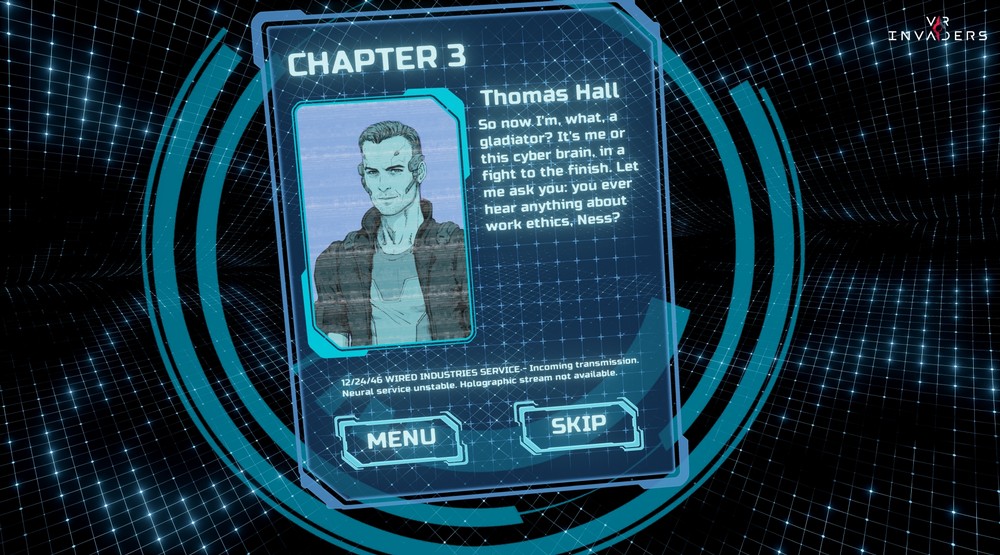 Controls are flawless using either the motion controllers for the Vive or the Oculus Touch.  Interestingly enough, you can actually choose your VR system from within the in-game options menu along with visual quality based on your system’s power.  Both control systems feel really good and immerse you perfectly within the game world.

When you finish or get tired of the story you can play in Arcade mode, which basically lets you pick from three difficulty levels and go for highest score. Finishing the story with three stars on all levels will take hours and the arcade mode is endless, and given the quality of the game design, the super-precise motion controls, and totally addictive gameplay, $18 is a fair asking price for those eager to play a two-handed shooter. Casual VR enthusiasts can probably wait for a sale. 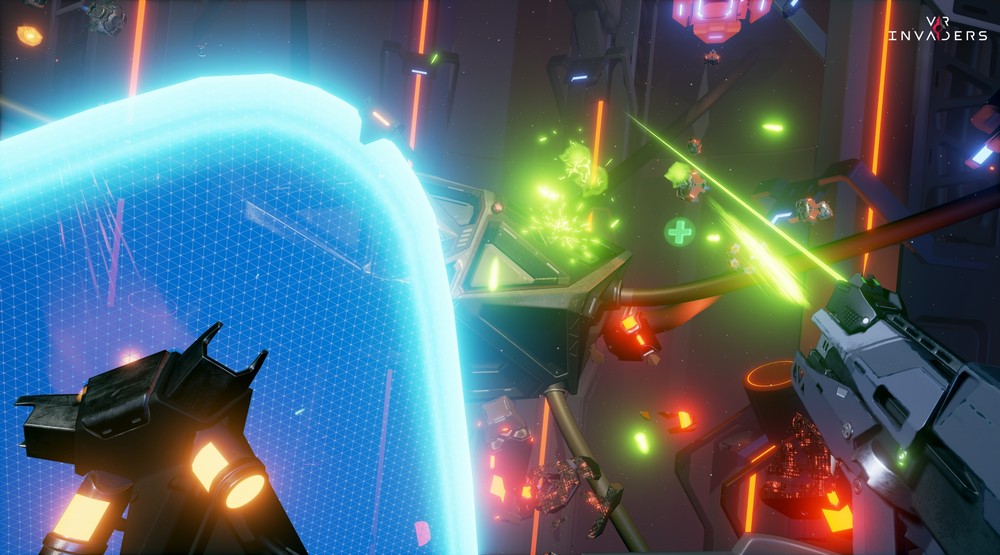 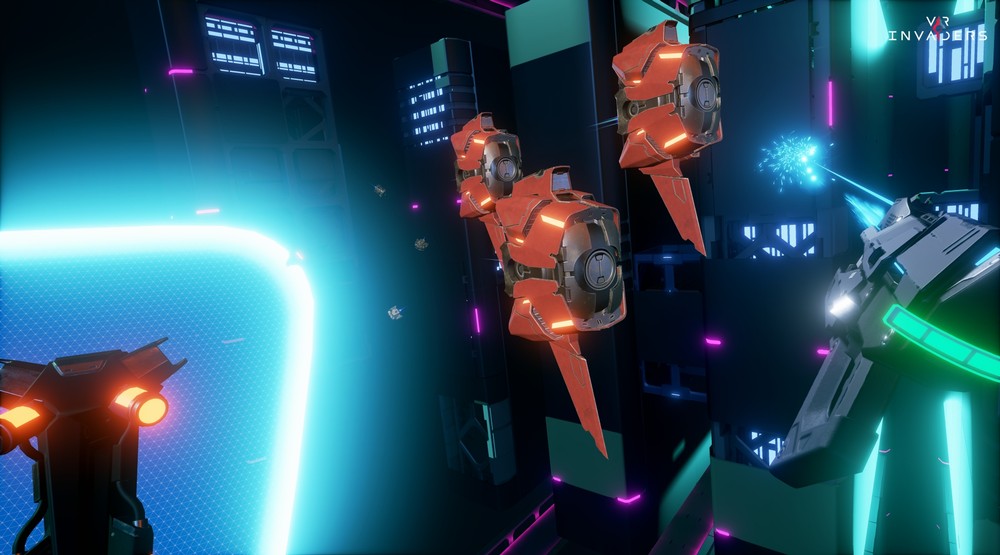 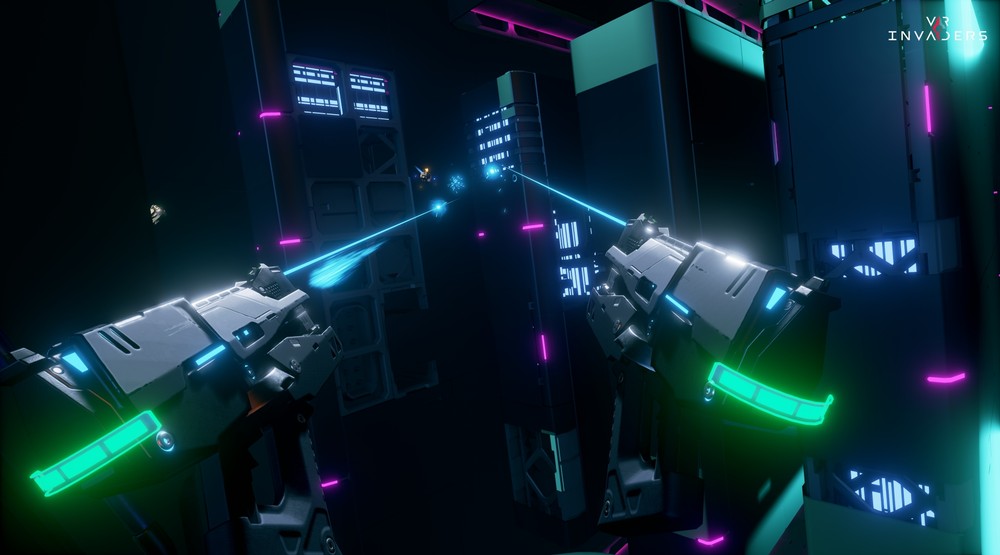