This War of Mine: The Little Ones Review – PlayStation 4 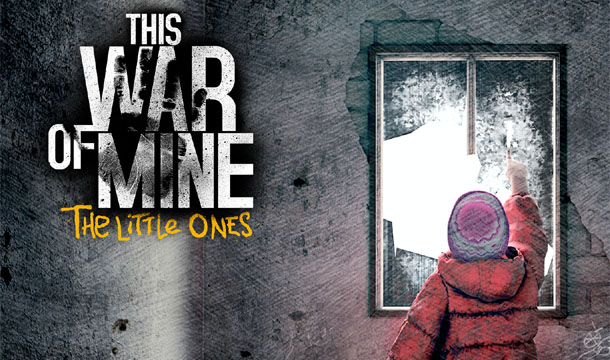 Clearly mirrors the despair and suffering of wartime collateral damage.

Originally released to PC in late 2014, I was a bit surprised when This War of Mine was announced for next-gen console release. I never played the original PC version, so I had no idea what to expect, but after having spent 30+ days in the game (about 8 hours of real time) I must admit I am really impressed with the original take on wartime survival strategy.  Normally, when one thinks of a “war game” you expect to be playing as a soldier shooting everything in sight in first or third-person, or maybe a general controlling troops in some sort of god’s-eye RTS game, but This War of Mine approaches war from a totally unique perspective – the surviving population who struggle to stay alive amongst the rubble of the collateral damage left behind in the wake of battle.

When you start the game you are given the option to play either a randomized scenario or you can go into the Scenario Creator and choose your own people from a roster of existing characters or create your own, then setup your own variable game environment; things like the duration of the game, the severity of the fighting, the harshness of the winter elements, etc. You can even choose the scavenger locations that will be available to you during the game. 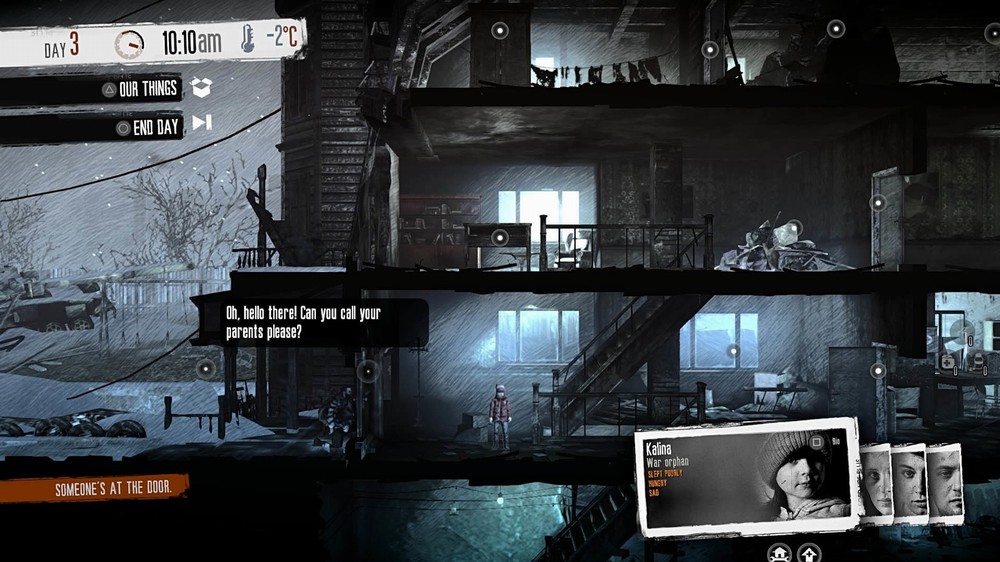 Once the game starts you will begin a repeating sequence of day/night cycles. During the day you tend to the needs of your survivors, crafting useful items like a bed, or stove or perhaps piecing together a radio to get useful news updates or simply enjoy some relaxing music.  Once the sun sets you will need to decide who gets to sleep (and where), who is going to guard your makeshift home, and who is going to go out and scavenge for fresh resources for tomorrow’s crafting session.

On the surface this might seem like a boring and repetitive exercise in survival, and in some ways it is, but that only mirrors what it must be like for those doing this in real-life. Thankfully, there are a multitude of sub-systems at work, all taking place simultaneously that give the game a major strategic boost.   Not only do you have to balance everyone’s hunger and health needs, you’ll also need to tend to wounds, both physical and emotional.  Early on in one of my games I was robbing an old couple, stealing medicine I needed while the old man was pleading that he needed it for his sick wife.   As a gamer, I was only thinking about keeping my people alive, but the characters in the game were greatly saddened by what I had done; one even sunk into depression saying things like, “Is this what we have become?” 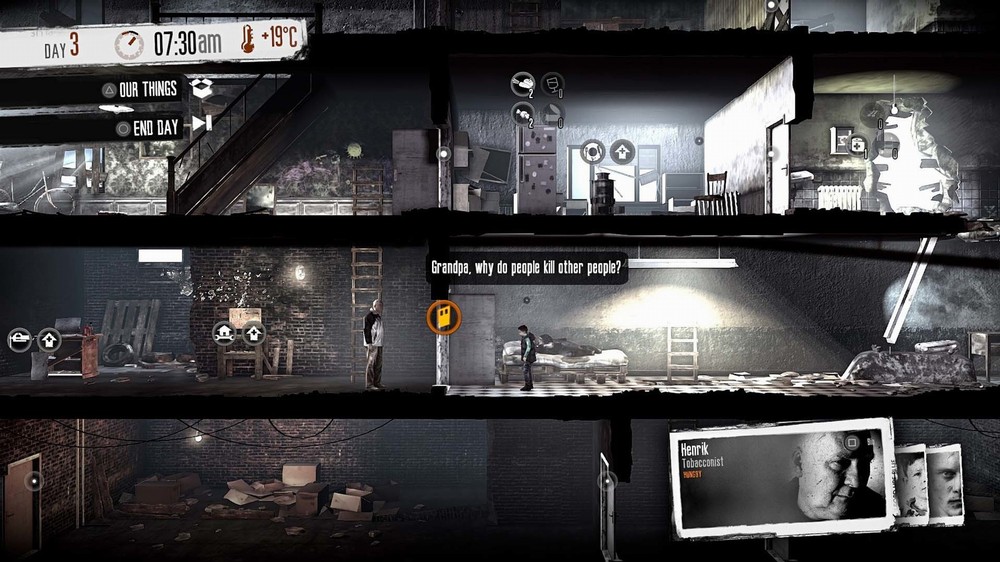 You’ll be constantly monitoring everyone’s status as you switch among your group telling people when to sleep, when to search for stuff around the house, when to cook, or what to craft. If someone gets sick they’ll need pills and rest.  If they are hungry they’ll need food and if they are really hungry they may need a meal (food prepped on the stove).   Keep an eye on the thermometer located by the ticking clock.  If it gets too cold you’ll need to craft a stove then find wood or books to burn to keep warm.  If your people start to get depressed they may need some alcohol or entertainment like a radio or a guitar or maybe just engage in casual conversation with each other.

Each survivor has a special ability, so if someone is good at bartering they should answer the door when a trader comes knocking. If someone is a good cook have them prepare the meals for bonus nutritional value.  It’s also good to have a rotating sleep schedule so whoever is going out at night can sleep during the day.  It’s a very hands-on and micro-managing way to play the game, but also quite rewarding when you can actually keep things running smoothly. 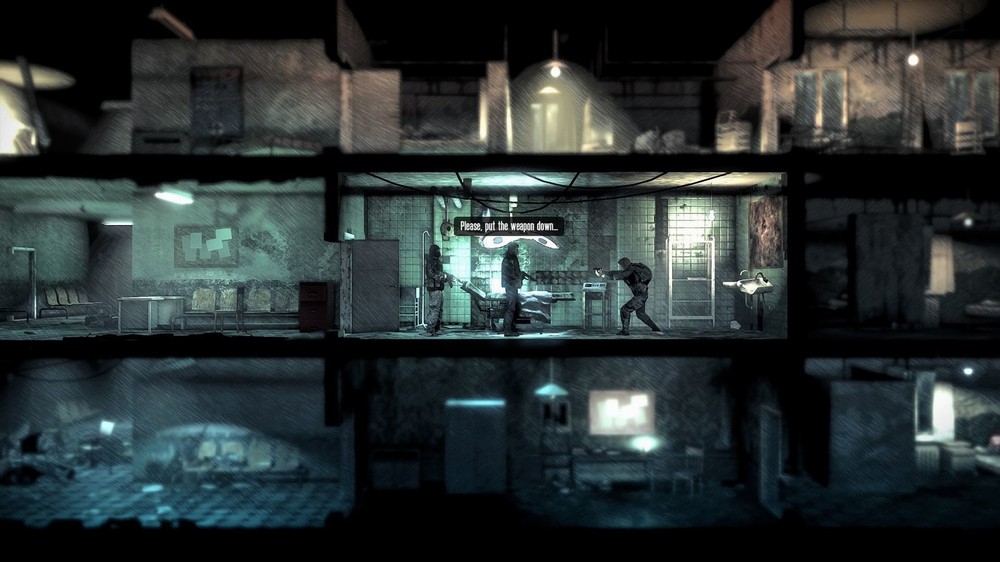 Scavenging is perhaps the most exciting element of the game. Prior to leaving your base you get to decide where to go and what tools you want to take with you.  Available locations are shown on a map and you can click them to see what materials they offer and how dangerous it is.  Some areas are populated with other survivors or even soldiers.  Some of these people will tolerate your presence as long as you aren’t caught stealing, while others will shoot on sight.  Usually, the higher the danger level, the more rewarding the loot…if you can survive. Just make sure you get home before sunrise otherwise bad things can happen.

New for the console version of the game are children; thus the subtitle, The Little Ones. Kids are a huge pain in the ass; a major distraction of your time and resources while offering little to no contribution to the group other than some emotional benefits.  Kids can’t scavenge at night and they can’t dig into piles of debris. Kids can craft simple items after adults teach them how, but at best, they scamper about the house playing or drawing on the walls, and at worst they complain about being hungry or needing a hug.  Children cannot die (despite my best attempts at neglect) but they will eventually run away.  When Sergei finally ran away from my home I was relieved until I realized that Katia had left with him.  Apparently kids form a special bond with one member of your group no matter how much you mistreat them. 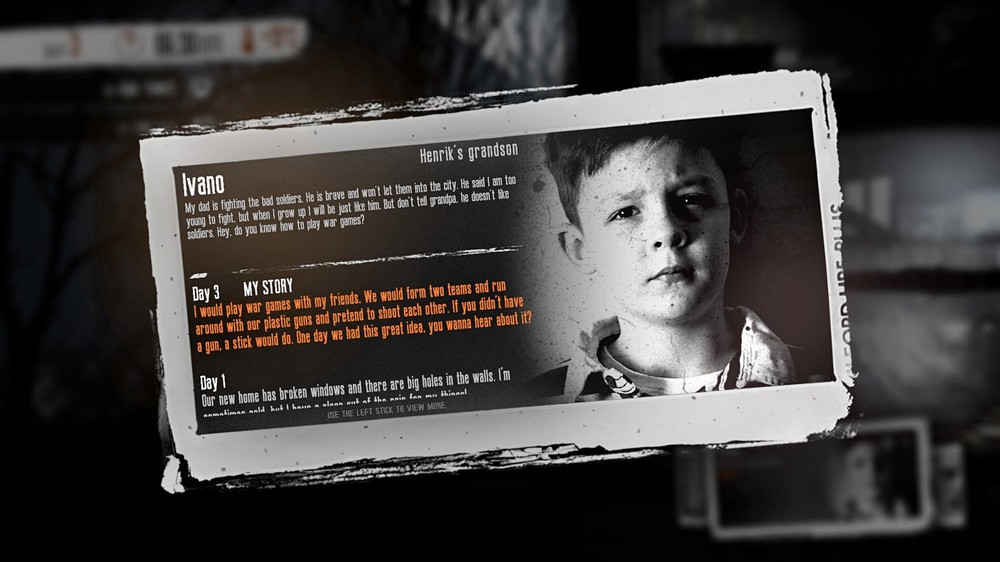 Before you go and call CPS on me, I have no dislike of children, but in a game where I was having trouble keeping adults alive for more than 8-10 days (the goal is 40) tossing a “useless” kid into the mix was super-annoying, plus I wanted to see how dark this game would go. Killing kids, even indirectly by neglect, would be a videogame first.  Once I have mastered the art of keeping adults alive I look forward to raising a “family” during a Russian holocaust. I’m guessing the developers were expecting the addition of kids to be a major feature of the game given the new title, so I seriously plan to explore this facet of the game more in the future and will report my experiences.

This War of Mine has some hauntingly beautiful graphics that mirror the bleak and depressing feeling of both you and the survivors you control. Each area is loaded with subtle details, and animations for the characters are detailed and elegant.  The UI is minimal with hotspot locations and intuitive icons that indicate your available options.  The various menus and crafting interface are refreshingly simple and there are cool bios for each character that serve as an ongoing diary of the events taking place.  Perhaps my favorite feature is the scrolling summary at the end of the game, complete with snapshots that recap all the significant events of your survival tale.

There is no spoken dialogue during the game and only atmospheric somber music to further enhance your own level of despair. There are some great sound effects; mostly weather like howling wind and the sound of rain falling on a tin roof.  You know the audio is depressing when you craft your first radio and dial in some classical music and pause to enjoy the mellow sounds, knowing your survivors are enjoying it as much as you. 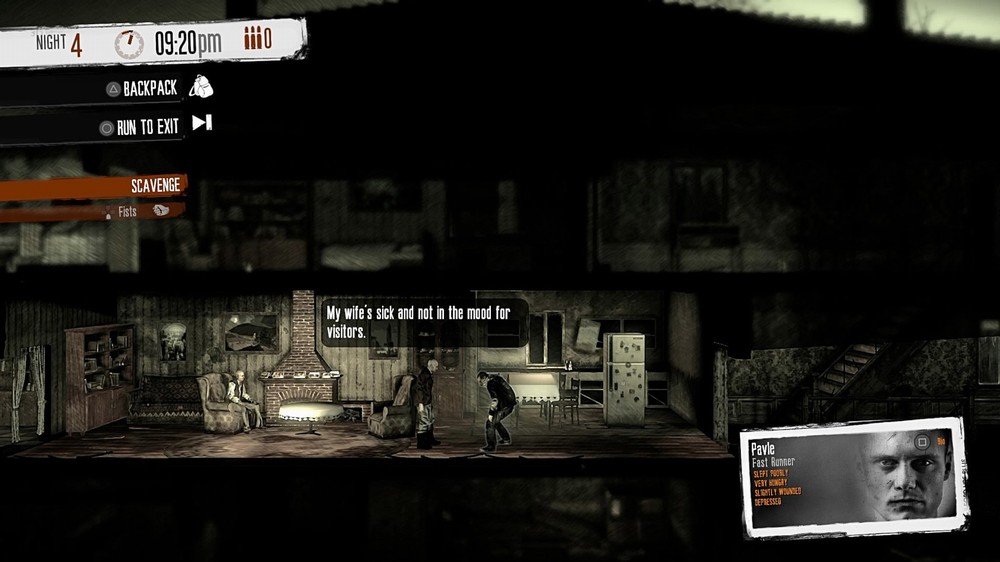 I’ve lasted 8 and 10 days on randomly generated games and 14 days on one of my own stories. There is usually one cataclysmic event that will take place; often due to my poor leadership skills that sends the group spiraling into some eventual bad ending.   In my first game Pavel died early on during a scavenger encounter, and Bruno, who was already depressed for robbing an old couple broke down.  In another game Katia was so broken she just sat on the floor crying and I had to have another character actually feed her.   It seems you are always fighting a losing battle, trying to stay one step ahead of hunger, exhaustion, and illness.  It’s an endless cycle of survival where you try to gather the resources you need at night to build the consumables you need to stay alive during the day.

If you can actually survive the war you’ll certainly feel relieved you made it, but you’ll never feel good while playing it. And that’s not a bad thing. This War of Mine: The Little Ones clearly mirrors the despair and suffering of wartime collateral damage.  War is hell, but surviving a war may actually be worse than fighting one. 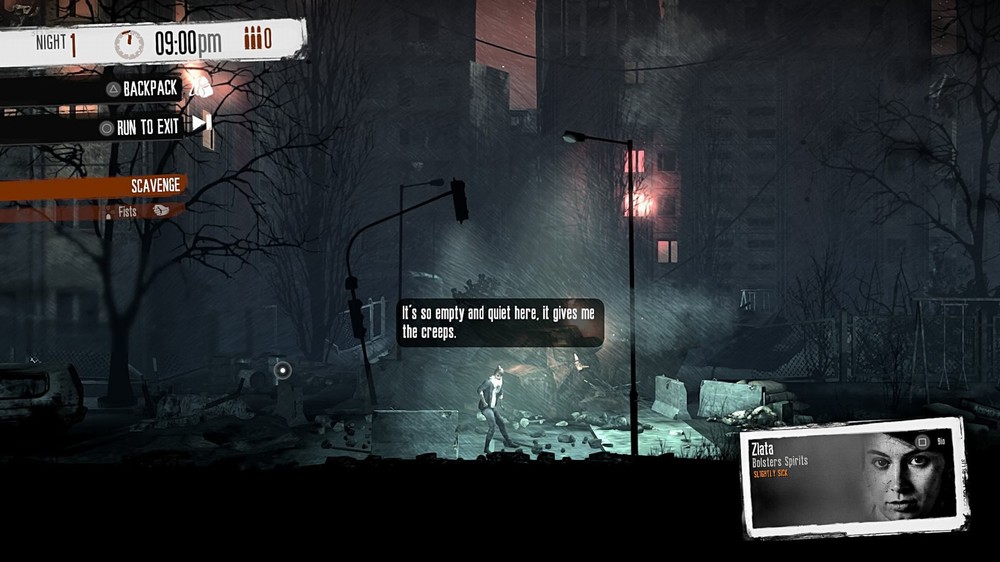 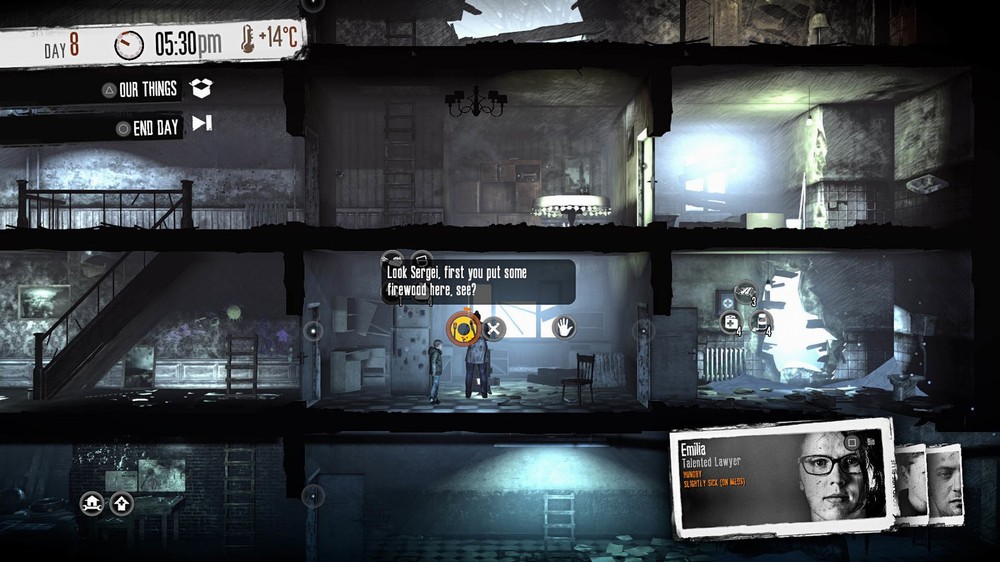 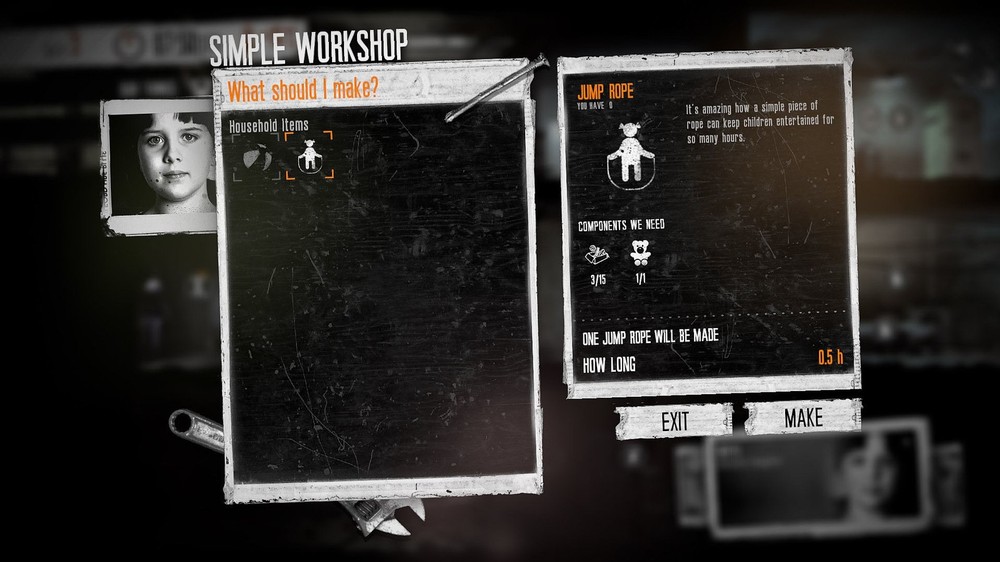 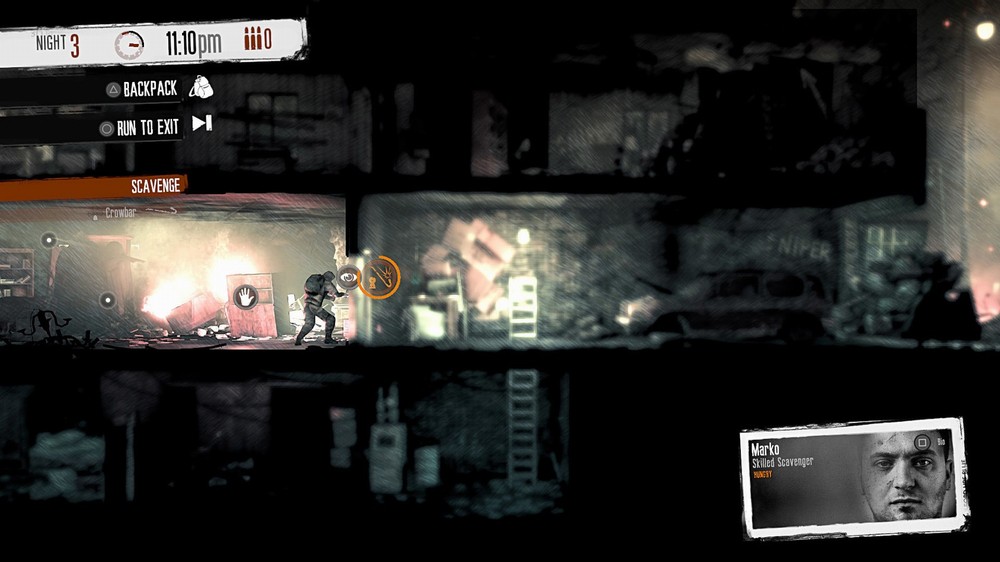 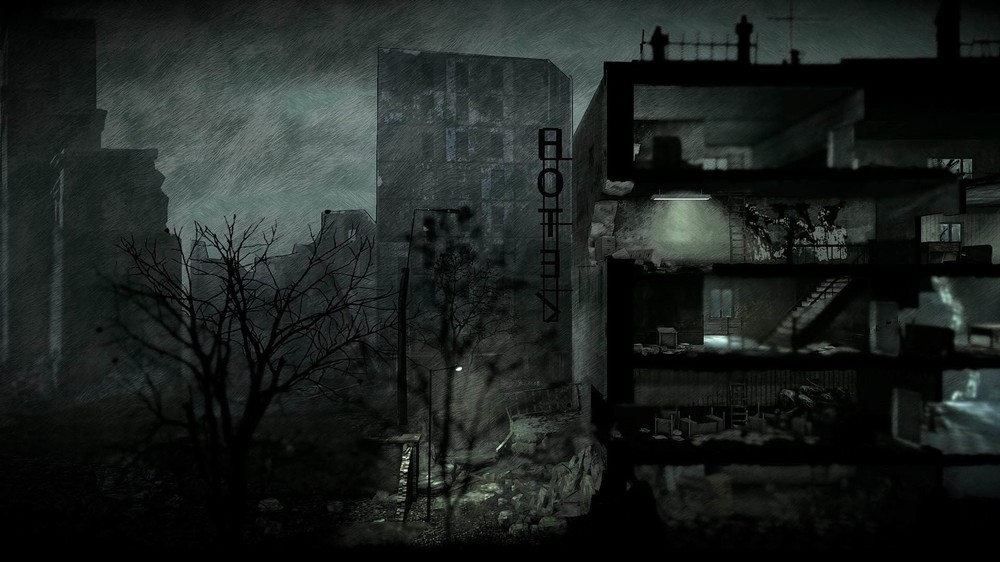