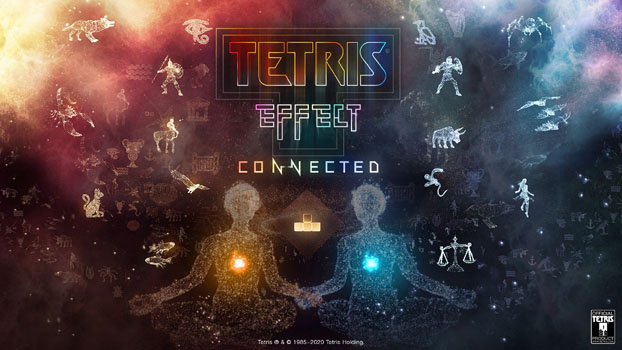 - Lack of variety in modes

Prepare to lose yourself for hours in this brilliant work of art.

One of my earliest gaming memories involves playing Tetris on the original Gameboy, and one of my first successes was seeing that space shuttle launch when completing the B-Mode of that game. While Tetris has never held a constant position at the forefront of my gaming collection in the following decades, it has always been a steady and reliable presence, ready to fill a few hours on a long journey or perfect for a couple of games if I have a few free minutes here or there. With Tetris Effect: Connected, though, Tetris is back in regular rotation again, and while the new multiplayer addition is making me realize just how much my Tetris skills have waned, I can’t get enough of this audio/visual wonderland.

I’ve been lucky enough to play Tetris Effect previously through PlayStation VR, and while I do have to say that the removal of the VR element does take away from the immersive combination of sound and visuals, playing Tetris Effect: Connected on a regular screen is still a magical experience. Visually, each stage reminds me of playing Guitar Hero or Rock Band: your main focus is on what’s happening in the direct center of the screen and the areas that you have control over, but there are visual effects happening behind and around this area of focus that both compliment and add to the overall feel of a level. Alongside this, each stage features a catchy piece of the soundtrack or series of audio effects that are triggered by moving or rotating the tetrominos. Subtle vibrations that pulse through the controller in time to the beat add to the sense of tactility, meaning that as well as hearing and seeing what you’re doing, you’re feeling it too. 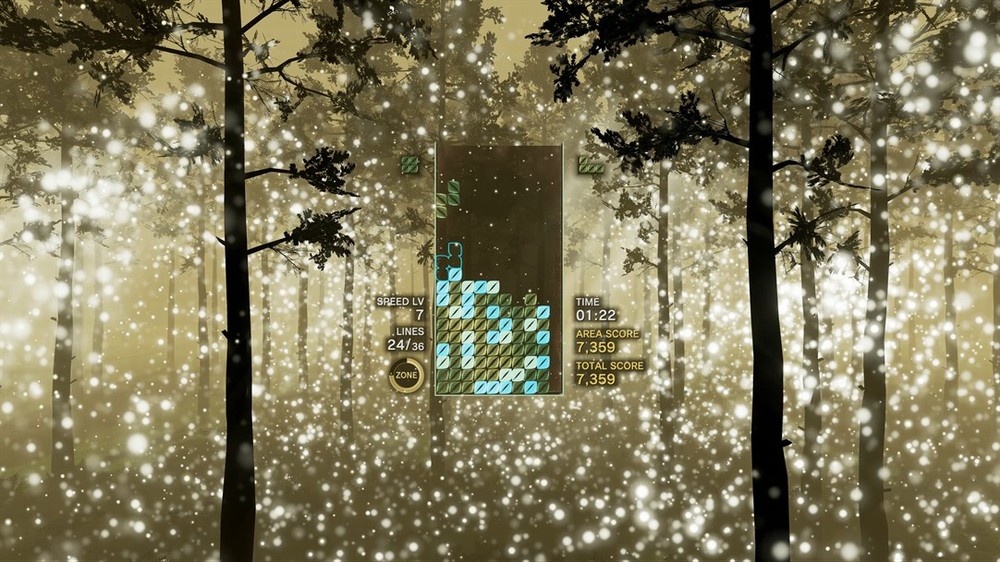 As you progress through the Journey mode of Tetris Effect: Connected which serves as the main single-player focus, you’ll encounter the vast majority of visual and audio presentations broken down into four- or five-stage chapters. The aim is to make it through each chapter in a single run, but failing a stage gives you the option to restart that particular level, just with your score for that run reduced to zero. There is an overall level-based progression system that runs throughout Tetris Effect: Connected (separated between single-player and multiplayer streams) but aside from offering up new avatar designs in multiplayer, these levels act as more of a point of pride than as a gateway to unlock or uncover new game modes or content. Tetris Effect: Connected is confident in its ability to exist as a game to be played for the enjoyment of playing, rather than feeling like it needs to entice the player with the promise of playtime-based encouragements.

Multiplayer modes are the biggest addition to Tetris Effect: Connected, and I’m not afraid to say that I was a little hesitant to try them out initially. Tetris has always been a single-player experience for me and so I was worried that playing against other people might ruin that image in my mind, but in fairness, the various modes on offer here only serve to complement and enhance the core experience. You have the typical Score Attack and Zoned modes, where you are set one-on-one against another player, but there’s also the inclusion of Connected mode, which seems to be the best way to display the main thinking behind Tetris Effect: Connected in its entirety. Connected is a co-operative mode where three human players take on a selection of AI opponents and initially each human player is focusing on their own screen and their own progress. At certain points, though, the human players’ screens connect into one larger screen, and the players take turns to place tetrominos over this new play space. This creates an excellent sense of cohesion and you truly feel as if you’re working together to achieve a larger goal. 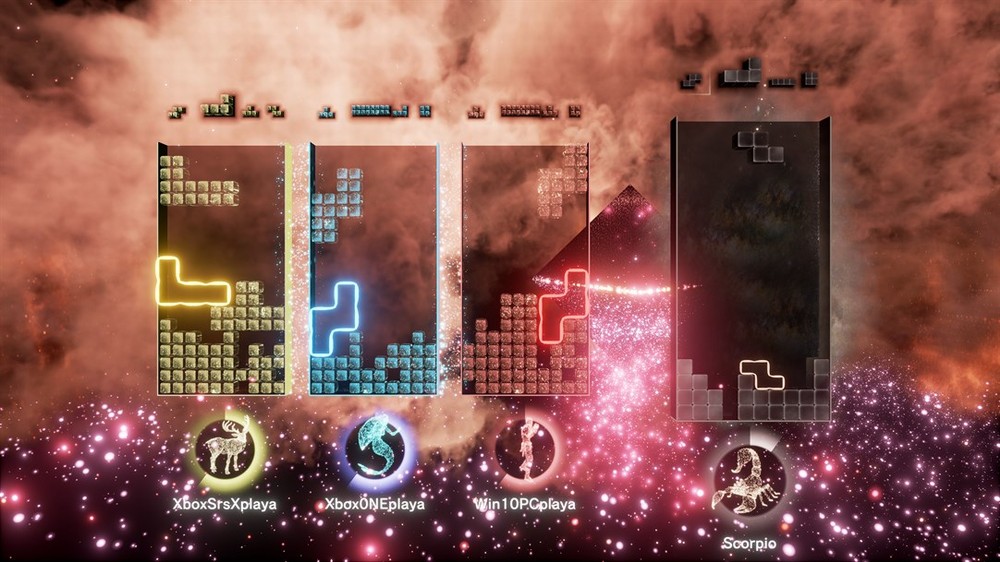 Throughout, Tetris Effect: Connected feels like an exploration of the human spirit and the beauty of the natural world and it does this so well that at times it feels like you’re playing through a genuine work of art. While I didn’t find the experience to be as emotionally overwhelming on a TV as I did while playing through PSVR, I still found myself to be fully enraptured at times, which only helps to ease the transition into the mental zone that Tetris has famously been able to induce. It’s easy to lose track of time when playing Tetris Effect: Connected as it’s entirely possible to get drawn into the almost hypnotic visual effects and forget that there is a world outside of the screen in front of you.

I’m not sure if Tetris Effect: Connected is the kind of game that will be a constant presence in my rotation, either in terms of playing it every day or playing it for hours at a time, but I don’t think that Tetris Effect was designed with that kind of play in mind. This is presented as more of a meditative experience, almost like a palate cleanser at the end of a tough day, or an opportunity to lose yourself in thought if you want a chance to relax and unwind. The beauty of playing Tetris Effect: Connected on the Xbox Series X is that thanks to the Quick Resume feature, I am able to jump in and out of the game at will, playing through a few stages or taking on a few multiplayer matches before moving on to play something else. 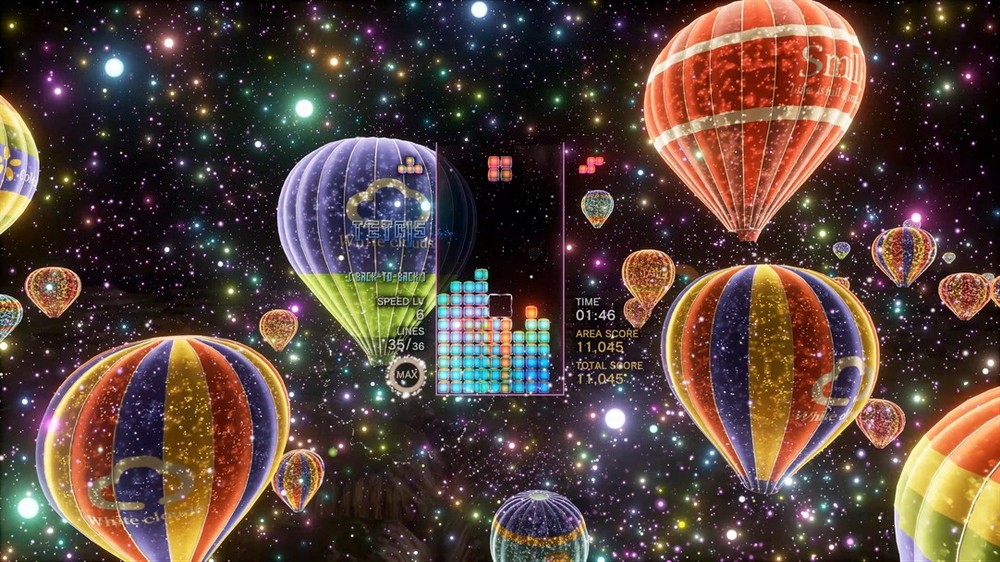 Tetris Effect was already a wonderful experience when I played through it on PlayStation VR, but the addition of multiplayer modes in this new Connected edition only serves to heighten the experience. There is a slight takeaway with the lack of VR options on Xbox Series X, but both the visual and audio design are strong enough to maintain an excellent sense of immersion and wonder even when playing on a TV, to the point where people not even playing the game are happy to sit back and watch what is unfolding on screen. While it’s possible to level complaints that Tetris Effect: Connected perhaps doesn’t deliver enough depth to its experience, Tetris has never truly been about content-based progression, and instead choose to focus on allowing the player to master what is in front of them, and Tetris Effect: Connected allows for this in spades. Both single-player and multiplayer offer a number of modes to lose yourself in, and I am personally delighted that I have a Tetris game back in my regular rotation once again. Tetris Effect: Connected is perhaps the closest I have come to feeling like I am playing through an art installation, and I would recommend it top almost anyone to have this game as part of their collection.