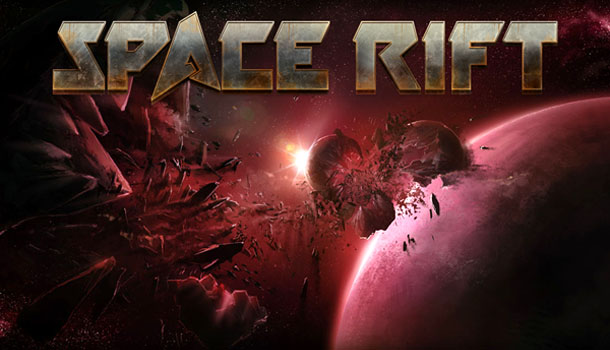 The best parts of Wing Commander and EVE all in stunning VR.

Love ‘em or hate ‘em, episodic games don’t seem to be going away anytime soon, and now the concept has spilled over into VR with the release of Space Rift: Episode 1.  The best way to descript this awesome new VR space shooter is if you were to combine the cockpit of Elite Dangerous with the combat of Wing Commander and the mining and ship upgrades of EVE.  If that sound remotely cool then please continue.

The story for Space Rift is brief and to the point; told in a short opening movie that takes you from our dead Earth to the infamous Red Planet where humanity has been forced to relocate and live under the dictatorship rule of the megacorps, WEYSS and PANDORA who terraformed the planet and now control its resources…you know, stuff like air.  You play Casey Black, a pilot for WEYSS, who wakes up in a room about ready to die from lack of oxygen.  In a last ditch effort to grab some O2 credits Casey accepts the first job offered to him.

Stuff happens and Casey is ultimately branded a traitor by his flight computer, but he manages to escape to a rebel base where he meets the scientists of Anoxia Station.  They are looking for a mysterious device called the SEED that can bring life to a lifeless planet.  Obviously, this will put the megacorps out of business so expect a lot of resistance from their attack drones as you try to complete a half-dozen exciting missions in this first installment of what turns out to be a rather engaging story despite a bit of below-average acting. 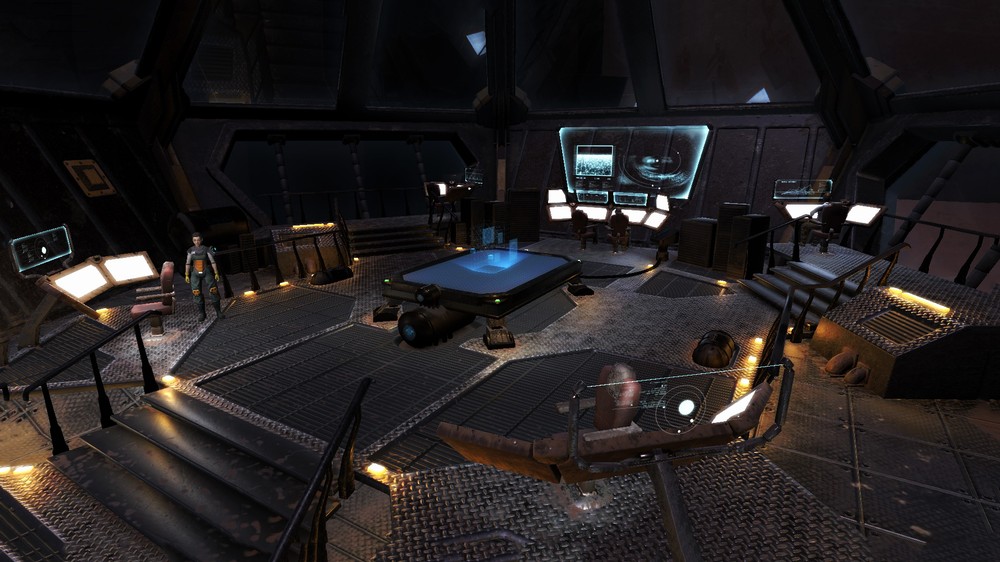 Space Rift is the perfect mix of sim and action.  I’ve tried to get into Elite Dangerous numerous times on both VR and non-VR and the cockpit controls and systems are just way too complicated for casual gaming.   After a two-minute tutorial in Space Rift you will know everything you need to know and will be flying like a pro by the first proper mission.  While in a ship you are surrounded by five displays.  Humorously, the fifth display is your game interface which the computer seems oblivious to in a wink…wink sort of way.   To use any control you merely look at the panel and hit the A button.  This includes a few overhead buttons like your searchlight, manual jump drive, and a pulse scanner.

Flying the ship is super-easy with variable speed control and afterburner that are prone to overheat until you install some upgrades.  You have full 3D control for pitch and yaw, and a 180-degree view of your surroundings through a bubble canopy.  The standard disc-style radar shows objects, enemies, and waypoints in 3D space.  You have a weapons’ console that lets you select between primary guns or lasers and secondary rockets or missiles.  You get to decide how to arm you ship and what systems to upgrade using cash earned by mining minerals.

On nearly every mission you will have a primary objective as well as a secondary goal that almost always includes mining as much minerals as possible from any nearby asteroids.  This is where one of the more interesting aspects of the game comes into play.  When you fly near an asteroid you can scan it to reveal some basic stats.  You can then launch a probe which will orbit the rock and display a color-coded x-ray scan of the minerals that are inside.  You have about one good orbit (unless you upgrade your probe) to pick a mining location at which point your probe will stop and start drilling into the core.  Once again you get to pick how deep to go before detonating a charge that will encompass a certain area and reward you with various amounts of minerals from that area.  And much like other ship systems, you can upgrade your mining gear so probes orbit longer, drills dig slower, and explosions grow in size granting more minerals. 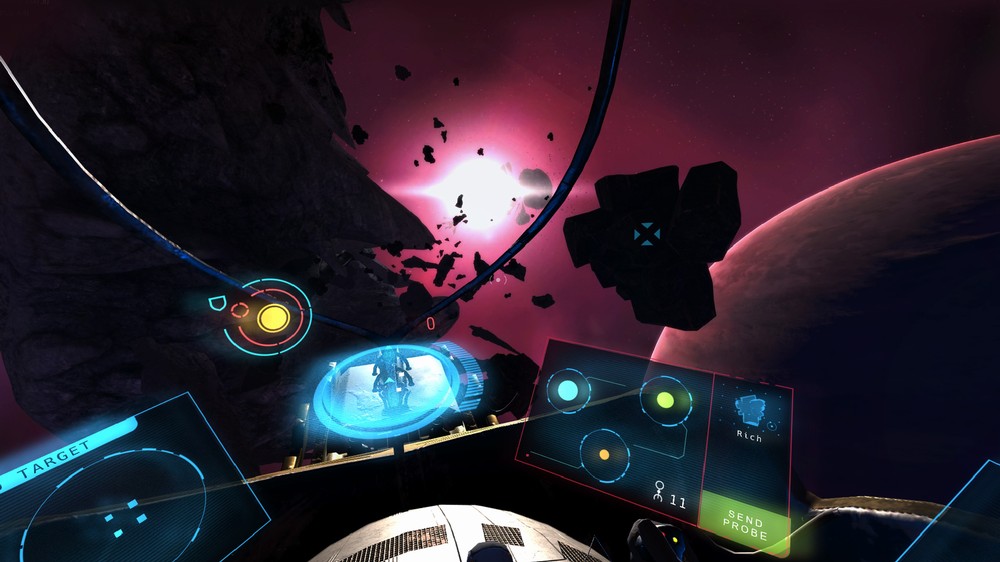 One thing to keep in mind is that most of the mining stuff is secondary, so if you complete your primary objective you may miss out on valuable earnings.  Always try to do the mining first no matter how much HQ yells at you, but also keep in mind that the longer you spend in an area the greater the chance enemy drones show up.  This is particularly true on one mission where you must melt the ice off asteroids before you can mine them.  Other special rocks will have rare gases or minerals that need to be drilled by getting really close then attaching to the rock to collect the resources.  Pro tip:  Buy extra probes early on and you can make lots of extra upgrade credits.

As combat starts to ramp up in the latter half of the episode you will enjoy the intuitive look-n-shoot primary weapon targeting system.  Rockets are dumbfire but missiles will lock on and aggressively pursue enemies until damaged or destroyed.  My only minor issue with the weapons system is that you only have one fire button so you must look to your 10 o’clock panel to switch weapons, fire, and then look back to switch back.  Out of all the missions there were only two where I even felt the need to use secondary weapons; especially if you upgrade your primary guns’ power, rate of fire, and recharge.

Between missions you’ll be stationed on Anoxia Station, which basically consists of two large rooms where you can access the main menu, upgrade your ship, stand in front of a window and hear your inner monologues , engage in conversations with the only women that will talk to you, and eventually, get your mission briefings.  This part of the game reminded me of the old Wing Commander games (before they got Mark Hamill and FMV).  Two things bothered me during this hub area.   Conversations were almost always multi-part, which required you to press the A button several times to hear all the bits.  Why not just play the entire conversation with a single button-press?  Even more annoying is that you cannot rotate your view with the controller, so when you chose to stand at a window you no longer could see any of the hotspots to go back into the room without doing a complete 180 – not comfortable in a seated position.  But these are two very minor distractions from what is otherwise a fantastic game once you get in the cockpit. 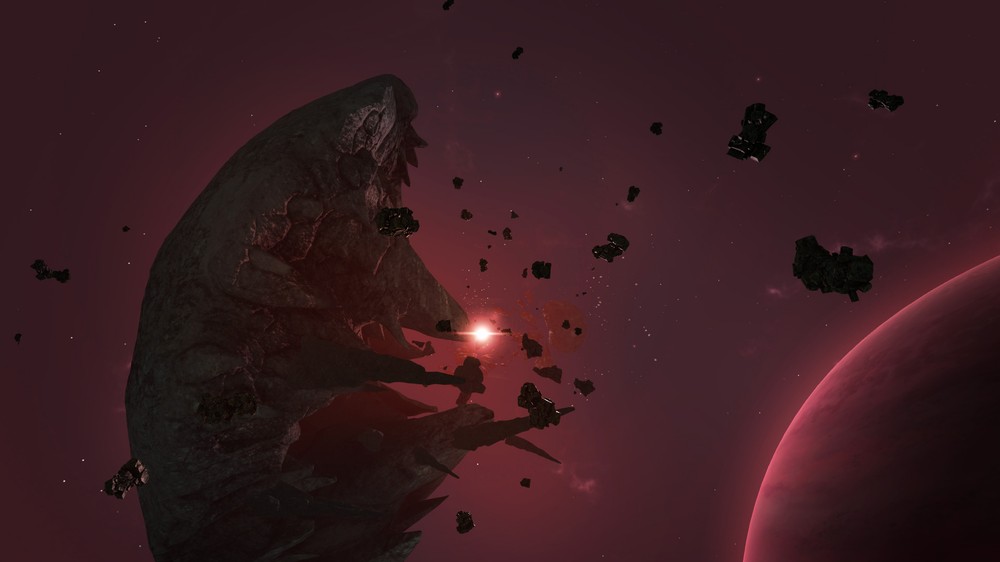 The presentation is quite impressive with gorgeous graphics – not quite on the scale as EVE Valkyrie but close to Elite Dangerous.  There were at least a half-dozen jaw-dropping moments in the game for me like seeing a giant moon blown apart from an asteroid impact or scanning a giant space cruiser for rare minerals or a mysterious black obelisk orbiting a volcano planet.  You get to fly two spaceships, each with their own unique cockpit layout.  The sound effects are perfect; the music is excellent and fits the theme of the game, although you may want to remix the levels as it tends to drown out the com chatter.  The voice acting is pretty good with dips into average and below average on a few exchanges.  The two women on the station are constantly arguing with me and each other, so that gets annoying, and Casey’s inner monologues often sound like they are being read off the page.  It’s not terrible, and I’ve certainly heard worse in more mainstream games.

Space Rift is compatible with both HTC Vive and Oculus Rift, but doesn’t support the motion controllers for the Vive, so there is no real difference between the two versions.  I played the first half of the game on Vive and finished on the Rift and I have to admit, the Rift looked a bit clearer, but not by much.  Just prior to this review the developers released a performance patch to smooth out the game on both systems.

This first episode of Space Rift will take you 3-4 hours to finish, assuming you do all the mining objectives for each mission.  Be warned that this does have a cliffhanger ending that will leave you eager for more and we don’t know when that will be just yet.  But best of all, you don’t have to take my word for how awesome this game is.  There is a free demo available on Steam, so check it out for yourself, and then you can comment and tell me how right I was.  But rest assured, this is easily one of the best space shooters (with a story) that you can play on VR to date. 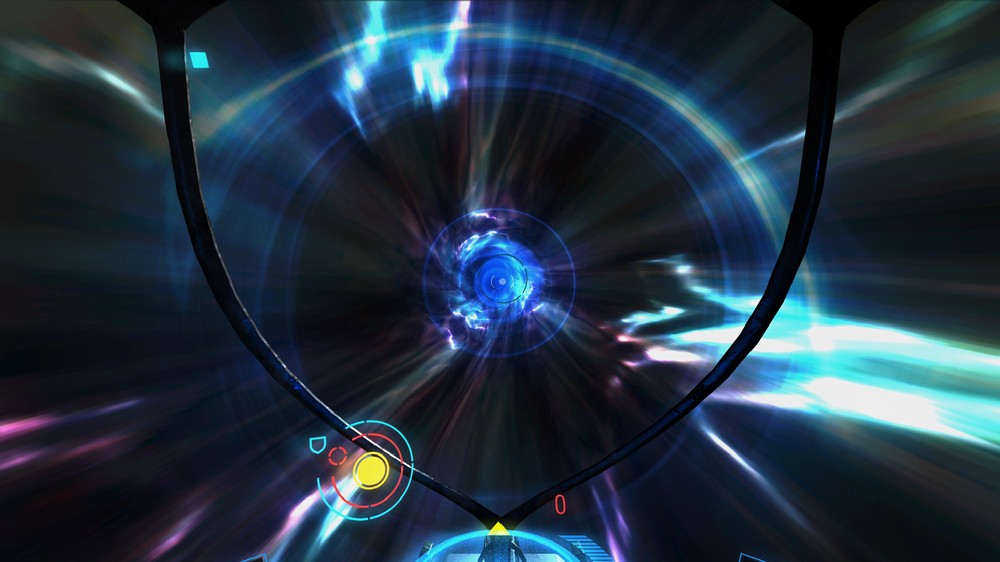 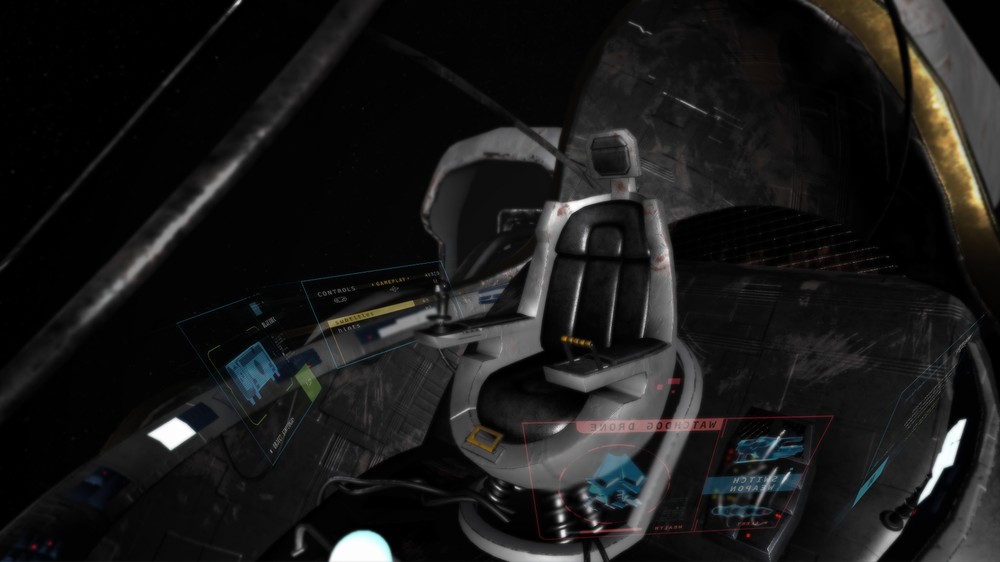 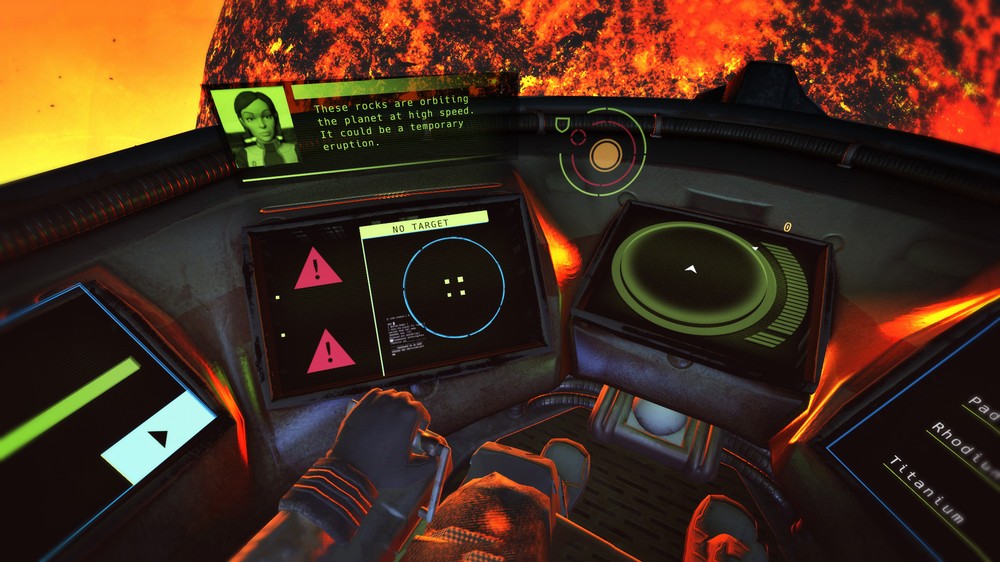 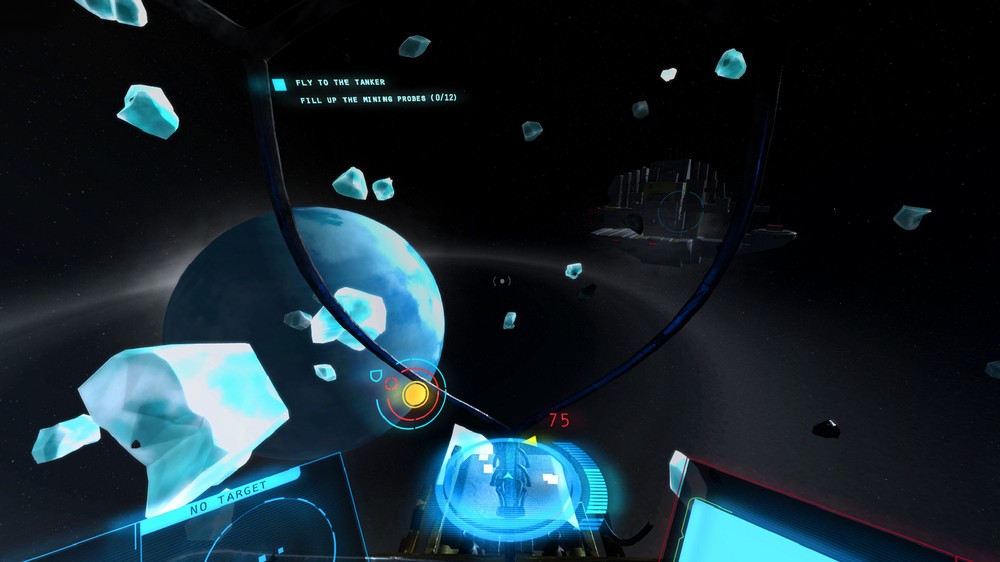 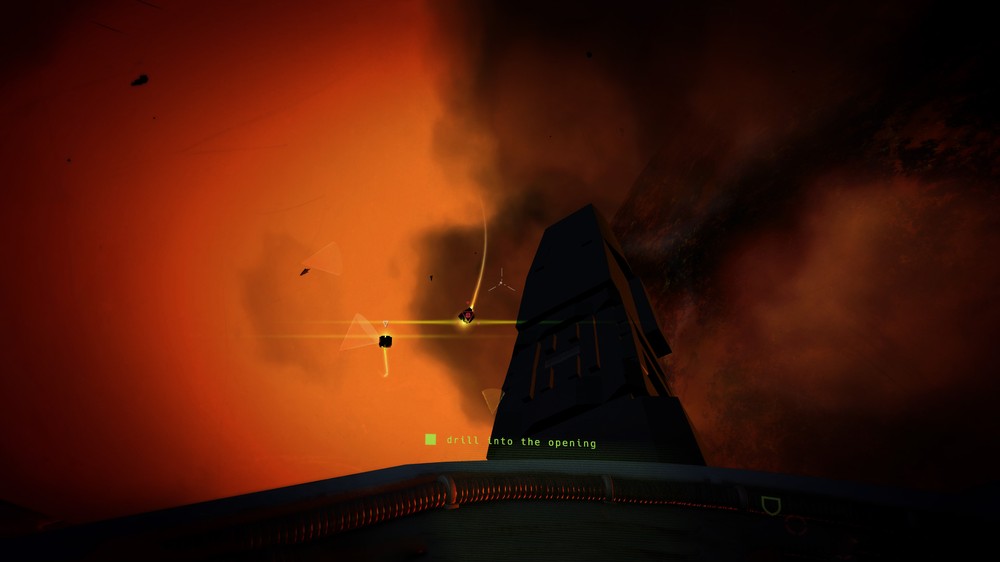 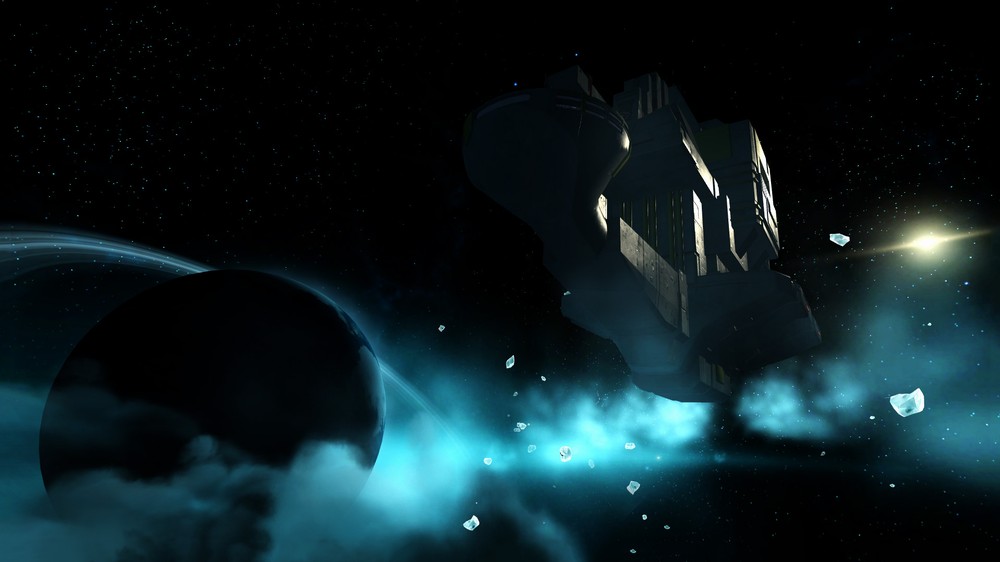