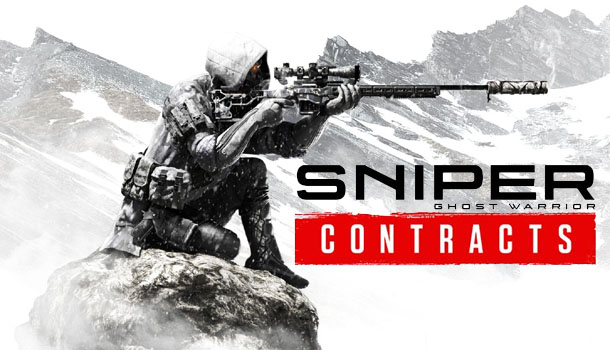 Enjoyable open-world sniper simulation that can be as fun and rewarding as you choose to make it.

Sniper Ghost Warrior Contracts is the latest installment in a series of sniper games from CI Games, which in itself is just one franchise in a growing genre of what can only be labeled, “sniper simulations”. I’ve played them all and reviewed most. As a former Army sniper now turned instructor I find a certain level of enjoyment in seeing how game developers have to walk the line of creating something fun and entertaining from a profession that is anything but. Video games and movies have certainly romanticized the art of sniping, as evident by the fresh crop of annual recruits I see each year who think they are the next Chris Kyle. Most of them wash out within weeks.

To its credit, Sniper Ghost Warrior Contracts does a better job than most of the sniper games out there, including its own prequels, with its fresh approach to storytelling and mission delivery, its open-world design, and a somewhat realistic approach to actually setting up and executing the perfect shot. There were multiple moments during the game where I was reminded of the latest Hitman games that share a lot of DNA with the way Contracts is designed and the way you consume it. The nonlinear access to the content really allows the player to create their own experience, both through choice and collateral encounters. 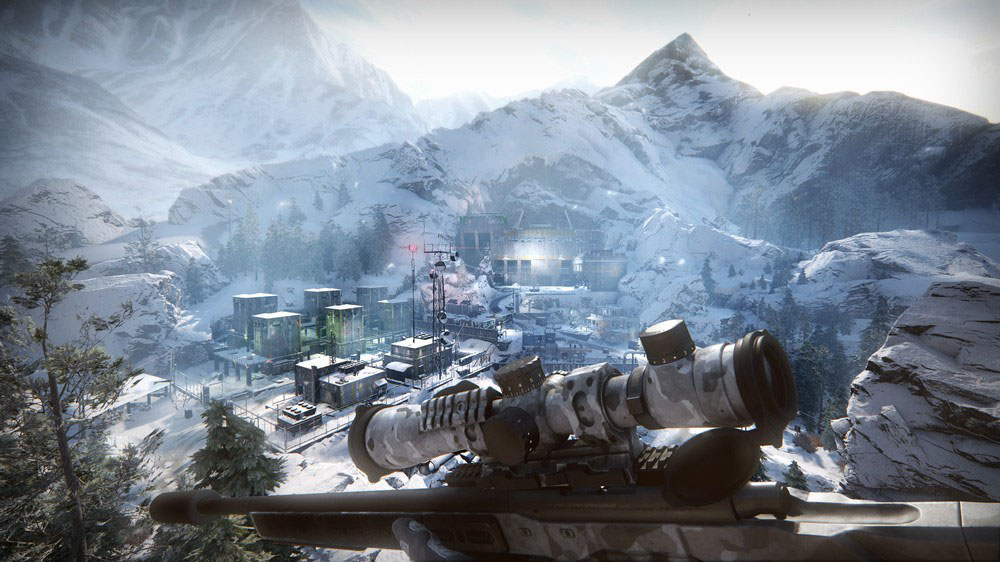 The game begins with a cutscene revealing the setup and backstory before introducing you, Seeker, a high-tech sniper with a fancy mask and a desire to turn bad guys into dollar signs, and your disembodied boss, the Handler. There is a brief tutorial will teach you the art of sniping, or at least this game’s interpretation of it, as well as non-sniper combat. Sniper games have become increasingly more realistic with their physics and simulation aspects yet still have to cater to the casual gamer for widest appeal.   Sniper Ghost Warrior Contracts does this with its difficulty levels; Marksman, Sniper, and Deadeye that not only change up the enemy AI aggression and awareness, but also determine just how realistic you want your sniping to be. The tutorial will also introduce you to certain ammo types that can be switched out as needed to get past certain “puzzles” as well as other gadgets like a remote turret.

Set in Siberia, the overarching story of the game deals with Russian mobsters, oil, and other criminal activities that have become serious enough to send in a merc sniper such as yourself to stop a civil war. You’ll get the traditional pre-mission setup where you can equip your primary and secondary weapons as well as a sidearm and some inventory items like med-kits and grenades. As your list of available weapons grows larger you’ll start having to pay attention to actual stats like damage, fire rate, stability, recoil, mag size, etc., and as usual, the guns you take into a mission are seldom the ones you’ll be using near the end. Looting enemies for better gear is essential to survival. 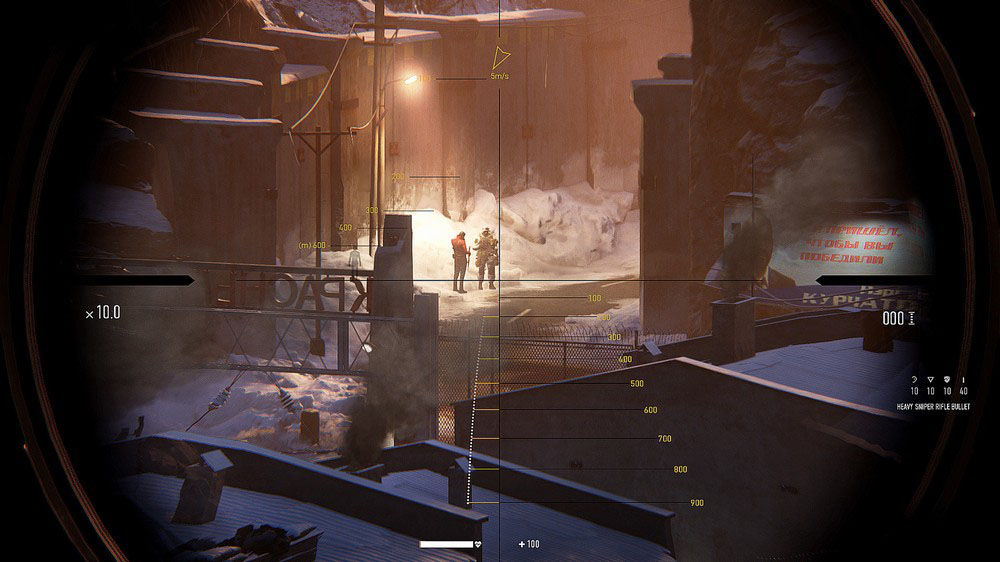 Sniper Ghost Warrior Contracts has only five levels or regions, but these deployment areas are massive, both in scale and complexity. There is so much content embedded in these maps, ranging from the random patrols to small, medium, and large military installations where you will need to spend considerable time planning your assault and even more executing it. You can call up your Region Map to track progress on your contracts as well as challenges, collectibles and bounties. You can even place custom waypoints that will appear on your HUD.

Each of the five regions is loaded with content including the “big boss” as well as dozens of incidental encounters leading up to him. While it might be tempting to go straight for the big payday the missions are designed in such a way that you really need to do the smaller stuff before taking on the primary contract. You can see a list of all your contracts and their value in both dollars and upgrade tokens but money never becomes a driving force in the game; at least not for me. I was here to clear the board and max out those tallies. The skill challenges are a great addition that add bonus rewards while actually changing the way you play and replay missions – again, very much like the recent Hitman games. 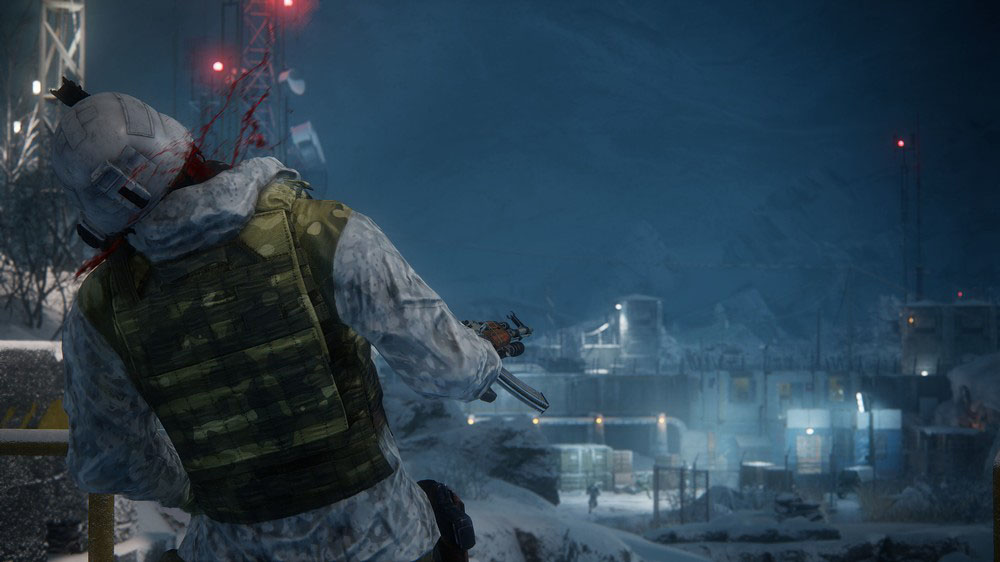 The great thing about all of this content is that it’s all there from the beginning, so you are free to tackle anything on the list in any order. This sandbox design can be a bit unforgiving if you aren’t careful. You’ll need to log/save your progress at extraction points that are scattered about the map and not always at convenient locations. It’s quite possible to die and have to repeat significant portions of the game if you haven’t saved, and even worse, your ability to fast-travel around the map is disabled until you have “extracted”, adding a bit of severity to what would otherwise be post-mission success satisfaction.

Despite the nonlinear approach to mission engagement there is still a rather satisfying gameplay loop of personal enhancement through gear and weapon upgrades. All of the cash and tokens you collect can be invested in upgrading your mask and nanofiber suit which provide active and passive abilities to improve your quality of life with high-tech functions like tagging enemies, night vision, thermal vision, enemy detection, line of sight indicators, and valuable sniping assists for calculation bullet drop and wind adjustments. You can also spend money on better weapons for all categories including a variety of grenades, mines, and special ammo types including experimental bullets that are immune to wind and gravity. 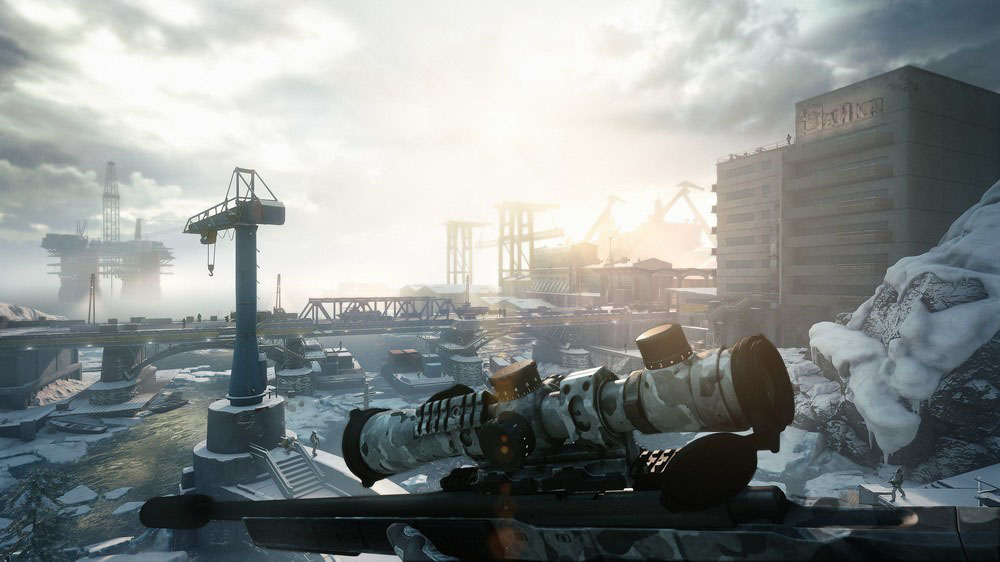 The missions themselves are quite satisfying, requiring a bit of thought unless you are going on a Rambo murder spree. Much like real-world sniping you need to observe your targets, their patterns, and most importantly, their visibility to others. This is where Sniper Ghost Warrior Contracts starts to reveal its underlying gameplay roots in that the enemies are positioned in such a way you need to find the puzzle-like solution of what order to take them out so no other enemy is alerted when another drops. This includes body discovery since you seldom have time to hide a body when you are killing from hundreds of yards away. But even when a soldier is alerted you still have fun sandbox ways to distract or divert them. There are endless ways to play this game and none of them are wrong as long as you stay alive and get paid.

Technically speaking, Sniper Ghost Warrior Contracts looks really nice. This is one of the first games I’ve played on my new PC gaming rig with an RTX2080ti card, and while it doesn’t use half of what this card can deliver it still pushed out consistent 60fps at 4K resolutions. The open-world level designs is fantastic, the weapon models look good, there is excellent lighting and shadows and the interface and HUD is thoughtfully laid out and non-invasive. Going between night missions and that blinding white map/menu screen can be hell on your retinas.   Special shout out to the bullet-cam that rewards your perfect shot with a satisfying slow-mo journey from barrel to target that never gets old. It’s been done in other games but just seems extra-cool in this one. The audio is also good despite the game’s tendency to repeat certain bits of com chatter. Environmental sounds, weapons’ effects, and the underlying soundtrack all complement the experience and add real-world immersion to the game. 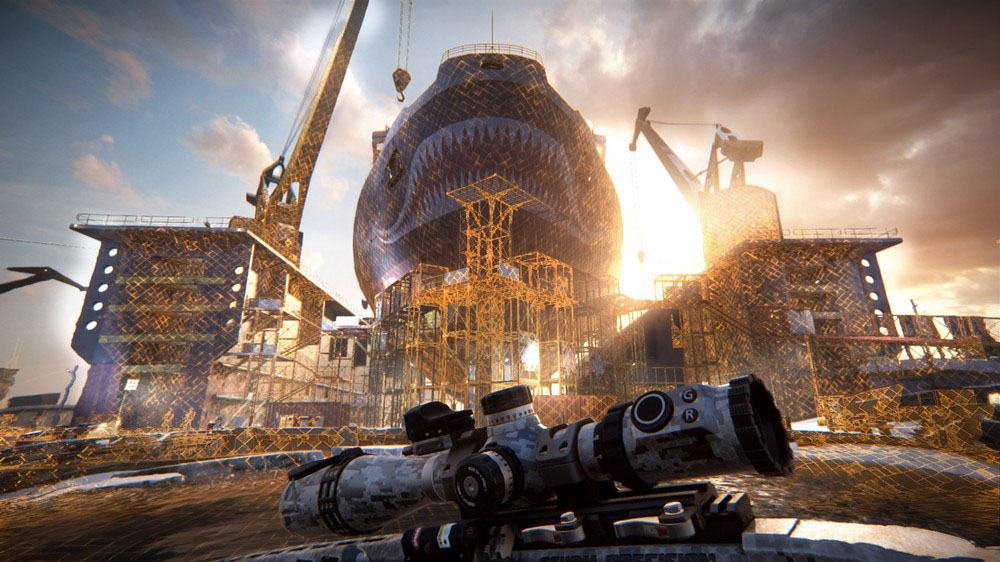 Sniper Ghost Warrior Contracts is certainly one of the better sniping games out there. The future-tech gadgets and the mask that can auto-correct for wind and elevation are fun gimmicks that keep the game entertaining while eliminating all the real-world considerations that are far from fun. I appreciated the open-world design that lets you consume the content at your own pace, in your own order, often even stumbling onto a new mission creating this dynamic experience that is unique for each player. Expect no less than 20 hours to fully complete this game, and you’ll enjoy every minute of it.