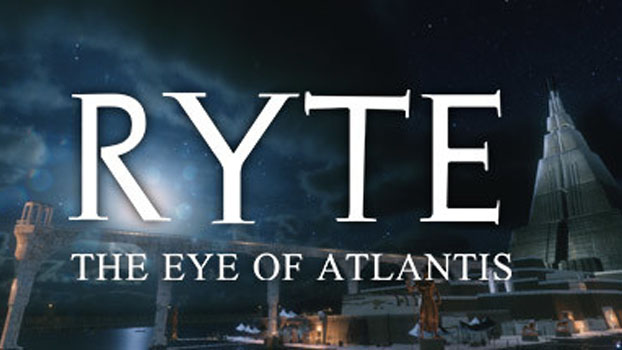 I’m a sucker for anything having to do with Atlantis whether it’s the 1992 Indiana Jones adventure game from LucasArts or the Stargate spinoff that ran from 2004-2009, so when I heard there was a new VR adventure game coming out based on my favorite lost city I just had to play it.  There haven’t been a lot of substantial VR titles released yet in 2021, so I was understandably excited to check out this Myst-like adventure loaded with puzzles and intrigue.

Ryte – The Eye of Atlantis gives off a bit of an Assassin’s Creed vibe with its high-tech setup that allows you to travel back in time; minus the animus and the whole DNA mumbo jumbo.  When the game starts off you have this robot companion/guide that will get you acclimated to the teleport movement as well as how to interact with the world and access your backpack.  It won’t be long before you are transported back to Atlantis, occupying the bodies of several Atlanteans starting with a fisherman. 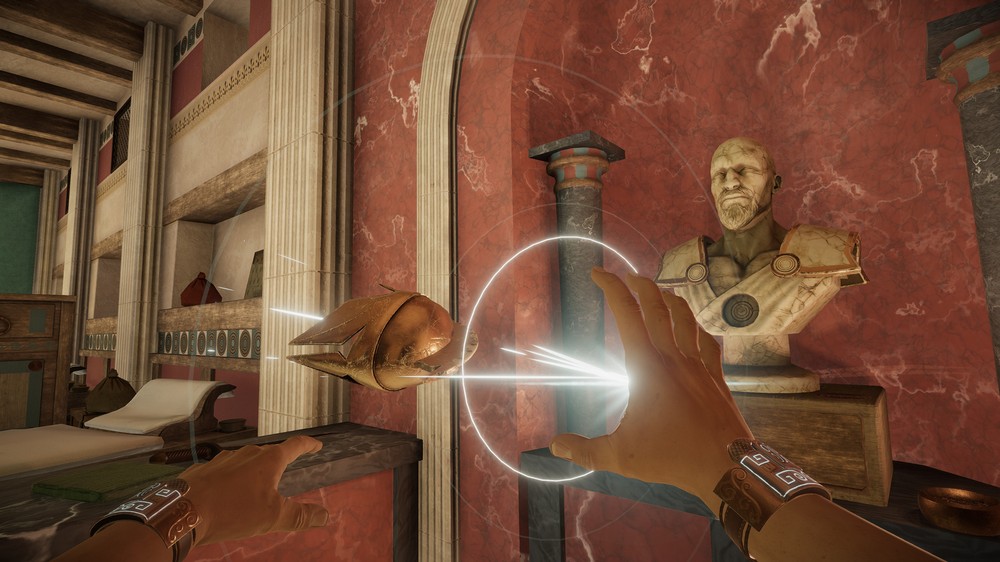 Gameplay is simple enough; you move around the environment interacting with various objects, some of which you can store in your satchel for later use and others more direct puzzles that need solving.  In the first chapter you’ll have some ring puzzles that need to be aligned and some have missing rings that need to be found first.  Another puzzle requires you to bounce a light beam around a room by moving mirrors, one of which is naturally missing.  Most puzzles are of average difficulty requiring only thorough exploration and logical thinking, but others, later in the game are totally vague and frustrating.  There were several that had me resorting to looking at my “reviewer hints”, and even after seeing the answer I still had no idea how they arrived at that solution.  I did enjoy finding and collecting the seashells that you could hold up to your ear and hear interesting story bits, and there was also a set of puzzles that required you to build a key out of various blocks to create odd Tetris-like shapes.

Many parts of the game will leave you feeling directionless, stumbling around trying to find out where to go or what to do next.  In the later part of the game you will team up with a young girl, Danae, who will guide you around the city offering casual hints and commentary, but even her assistance is often broken.  She will get stuck or not move on to the next objective properly, forcing me to exit to the menu then resume the game where she will be unstuck and the game can continue.  This is only made worse with some insufferably long load times; a minimum of 20 seconds and usually 30-40 between each of the small areas within each chapter and that’s on a powerful PC with the game installed on a fast SSD.  As immersive as Ryte – The Eye of Atlantis can be when playing; these major interruptions really ruined the flow for me. 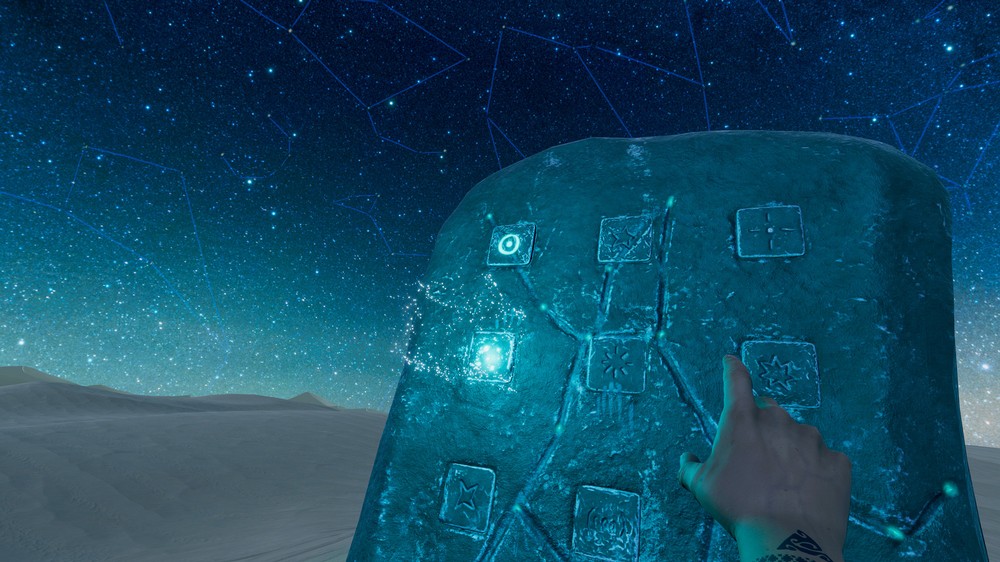 There were also lots of random glitches and a few bigger bugs that had me reloading my game.  In one area Danae offers her hand to pull me up into a hatch but I was unable to interact or grip her hand.  In another area I was supposed to use an emergency recall button to progress the story but I was unable to take out my satchel to use the button.  Exiting to the menu and reloading a checkpoint always fixed these issues but there was always about 2-3 minutes of load screens involved. Also, if you take off your headset without pausing the game first the game will auto-pause and won’t resume…at least on the Rift S.

I was surprised to get to the end of the game and find a results screen that highlighted some critical choices revealing there are four endings to the game.  The game is rather short with my first trip taking around two hours and my second pass just over an hour.  There is no reason you can’t see all the endings if you have the patience to play the game four times.  The puzzles and story don’t vary all that much, so you just need to make a few different key decisions to get the new ending.  There is also a big chest in the final room that I have yet to unlock or even find a hint of a clue on how to open, and that is a separate result on the final summary screen.  There are also discoverable tablets you need to find and smash – something the game doesn’t tell you until the very end after you have missed a dozen or more; another reason to replay I guess. 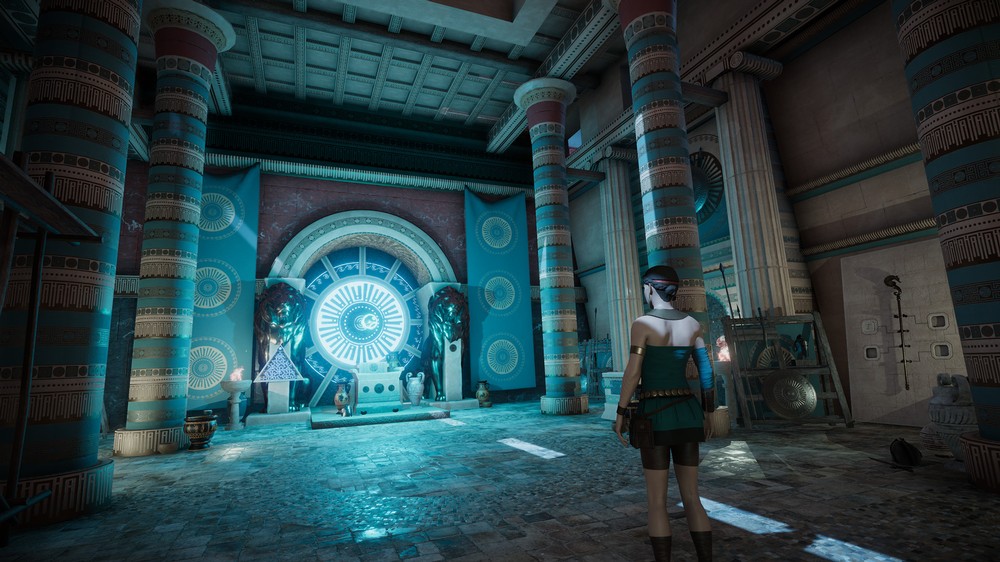 I played Ryte – The Eye of Atlantis on both the Oculus Rift S and the Vive with nearly identical results.  As always the Touch controls are my favorite and most comfortable option, but the game renders forearms and animated hands for your character that function fine with either device.  The Rift S had slightly sharper graphics but the game does make good use of room-scale which means the Vive has the clear advantage here with its remote sensors.  I had some consistency issues on accessing my backpack with the Rift S, while the Vive was able to accurately track the motion of my reaching over my shoulder to grab my virtual satchel.  The Touch controllers also had excessive vibration; nearly non-stop.  At first I thought the game was trying to lead me in a certain direction but there was no logic to the vibrations.  It was powerful and lengthy enough to drain a freshly charged set of batteries on my initial play-through, so you might want to disable. There are minor pros and cons for each VR system but not enough to vary the score or your enjoyment of the title.  The game does want you to stand and offers no height adjustment to let you play seated.

The overall presentation was pretty good, reminding me of those CDROM slideshow adventure games you click to move around and solve puzzles.  Having this in VR really helped with the immersion and kept the game from feeling as generic as those other adventures.  There are some cool environments and a few characters with which to interact.  There are some impressive set pieces, one with a giant tidal wave and another with these enormous stone warriors battling on the horizon.  There are some great details in some places; mostly the puzzles which have cool symbols and vibrant lighting and special effects.  The voice acting is exceptional and the music really accents the drama and suspense. 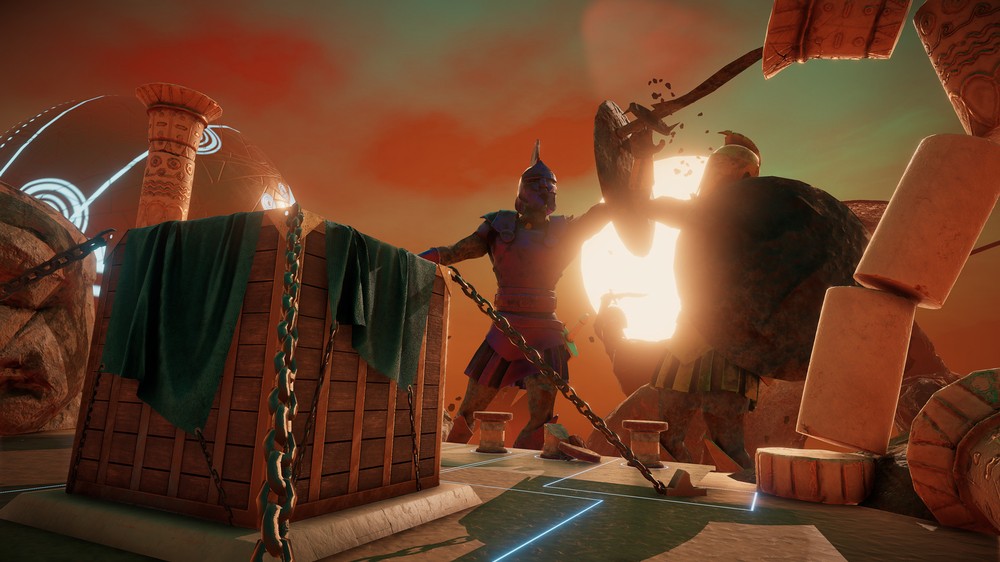 Recommending Ryte – The Eye of Atlantis is a tough call.  I’m not sure how much of my problems will be fixed with a day-one (or future) patch.  Some things like frequent lengthy load times and illogical puzzles or directionless gameplay can’t be patched away.  There is also only 60-80 minutes of gameplay here.  Sure, this will be bloated with getting lost or stumbling with a few puzzles so you might get 2-3 hours out of that first pass, but any future trips to unlock the other endings will take around an hour each.  $20 seems a bit steep, but it might be worth checking out when it goes on sale.

Ryte – The Eye of Atlantis is currently available on Steam for the Oculus Rift, Rifts S, and Vive and should be showing up on the Oculus store in mid-February.  A future update later this year will add support for the Quest and Quest 2 headsets.  If you enjoy a fairly standard adventure game experience with the added immersion of VR and don’t mind some long load screens and occasionally getting lost in the world or on a puzzle solution then give this a shot.  Atlantis is still as cool and mysterious as ever.