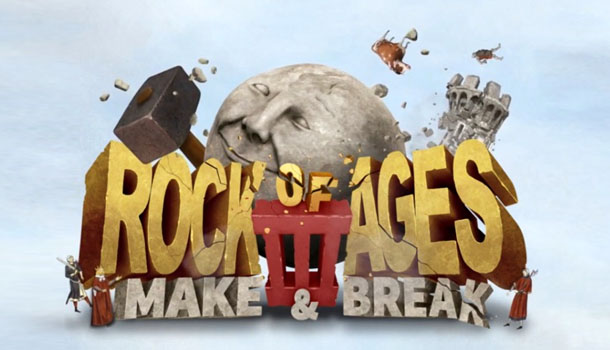 Until a significant update happens this pile of rubble needs to be avoided.

I’m a big fan of the Rock of Ages series; at least the first two games that blended Monty Python style humor and visuals with some fun Marble Madness-style gameplay, but as is the case with most trilogies, the third installment is usually shit; quite literally in this case as big steaming piles are frequently used to crap all over your game.  I’ve been playing with Rock of Ages 3: Make & Break for several months now, both in a special preview copy as well as the beta, so I lot of the oddities I took in stride, confident they would be polished by the final release, but now that the game is officially out the finished product is most disappointing.

Rock of Ages 3: Make & Break has a lot of varied content, and as the title hints there are two main sections, the Make section where you can design and build your own levels and share them with the community and the Break section where you can find the core story mode as well as those community levels.  I spent most of my time playing the game rather than creating levels, but from what little time I spent in the editor I found it functional and surprisingly intuitive.  If you’re the type of person who enjoys making games as much as playing them you’ll probably have more fun in this half of the game. 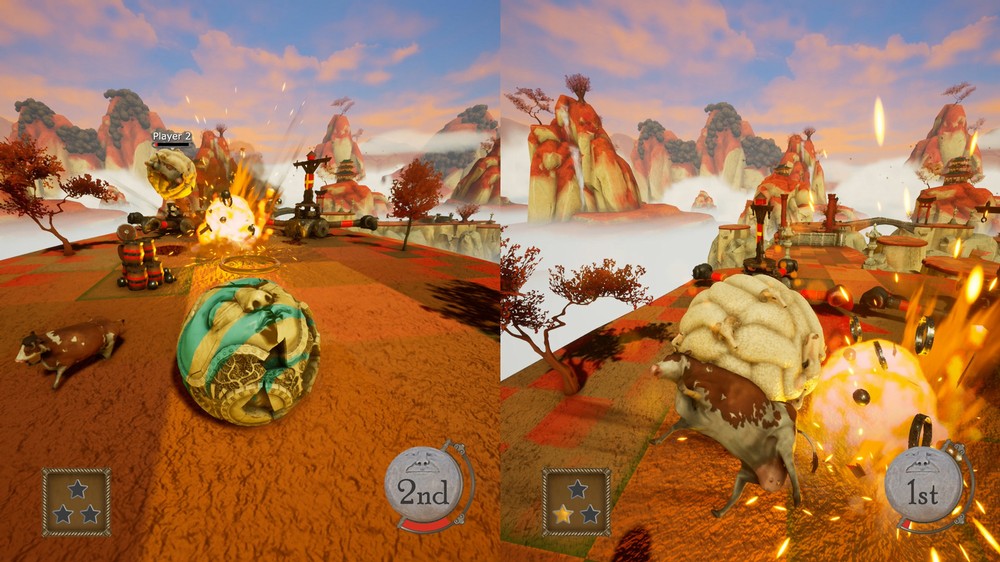 Rock of Ages 3 supports multiplayer PvP for both local and online challengers and you can even use Remote Play Together to play with people who don’t even own the game.  There are plenty of race and battle modes, each assigned to a specific period in time and each with their own historical boss like Ceasar as well as other interesting choices like Humpty Dumpty, Moby Dick, and some crazy Spaghetti Monster that apparently created the universe before creating God.  That last one was clearly the result of somebody desperately wanting to include a bunch of spaghetti and meatballs themed levels.

Therein lies a big part of the problem.  Nothing really makes sense in this game.  It just looks like a bunch of people got together and used the built-in level editor to make a bunch of poorly designed levels, tie them together with a paper-thin theme and throw it against the wall to see what sticks.  While the Monty Python visual style remains intact the game lacks any wit or humor.  The gameplay is very unbalanced and frustrating to the point of several rage-quits on my part.  All of the story content is gated using a star ranking system, much like a mobile game, forcing you to complete mundane levels and modes in order to unlock something that’s hopefully more entertaining.  The levels are laid out on this gorgeous animated map and you get to steer your ship around the map unlocking items and stages provided you have the required stars.  This unlocking system does allow you to skip the modes you don’t like, at least early on, but eventually you’ll come to a locked stage that will force you back to previous levels to play those annoying modes or do better on the ones you might enjoy.  Full disclosure – I stopped playing at 30 stars.   Replaying for leaderboard positions is pointless, as most of the top scores were earned either by cheating or exploiting glitches in gameplay. 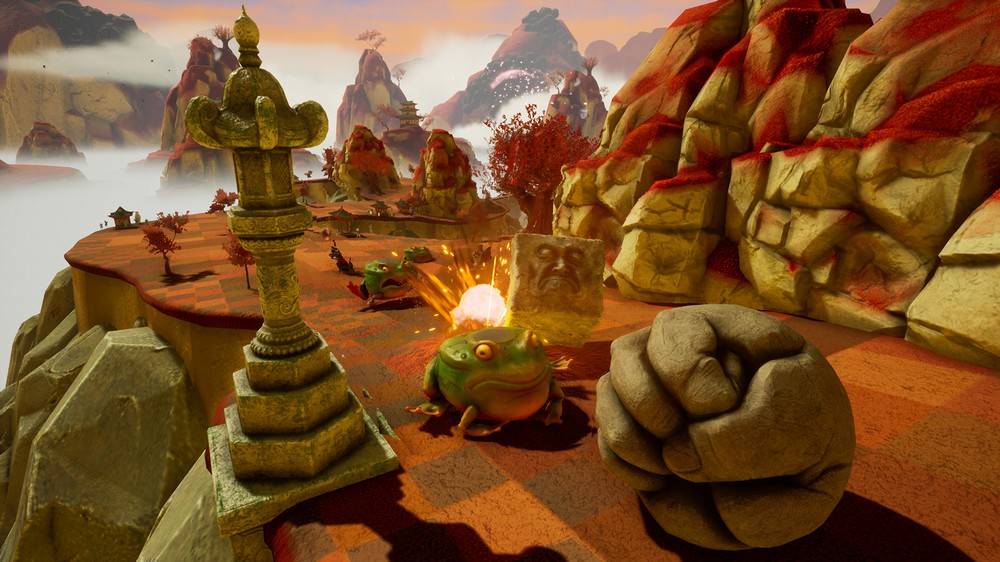 The core challenge mode has you fighting that stages’ boss in boulder-to-boulder combat.  You initially get to choose your boulder types and any defensive abilities from a growing list of unlocked inventory then the game begins with your chosen boulder being slowly chipped away.  This gives you about a minute to strategically place your defenses on the narrow winding path that leads to your castle door with the goal of either slowing or destroying your opponent’s boulder when they attack.  Placing defenses costs gold that you can collect by grabbing random nuggets scattered about the levels, or creating a bank that will mine the gold, or simply earn more gold between rounds.  Learning how the various defensive units work together is a big part of the strategy.  There is another survival variation of this mode that will task you with defending your own fortress using a limited amount of units for a set amount of rounds.

This head-to-head battles used to be the very core of the original game and it has slowly been supplemented with all sorts of other crazy activities, but before we cover those let’s talk about why the core game is broken and virtually unplayable…or at least unwinnable.  The game is extremely unbalanced with the AI building their rocks faster and seeming to have unlimited resources when it comes to building defenses.  From what I can tell it takes the computer three attacks to bring down your door while it takes me four.  I’m using a boulder rated at 200+ damage, but even at full speed I can only muster 179 damage.  The computer gets in three attacks to my two, so I don’t stand a chance of ever winning, especially when each new attack round greets me with a plethora of new enemy defenses I neither have nor could afford to build in that quantity, and we’re talking some real unfair stuff here like guillotines that can destroy your rock with a single hit – even if you strike them. 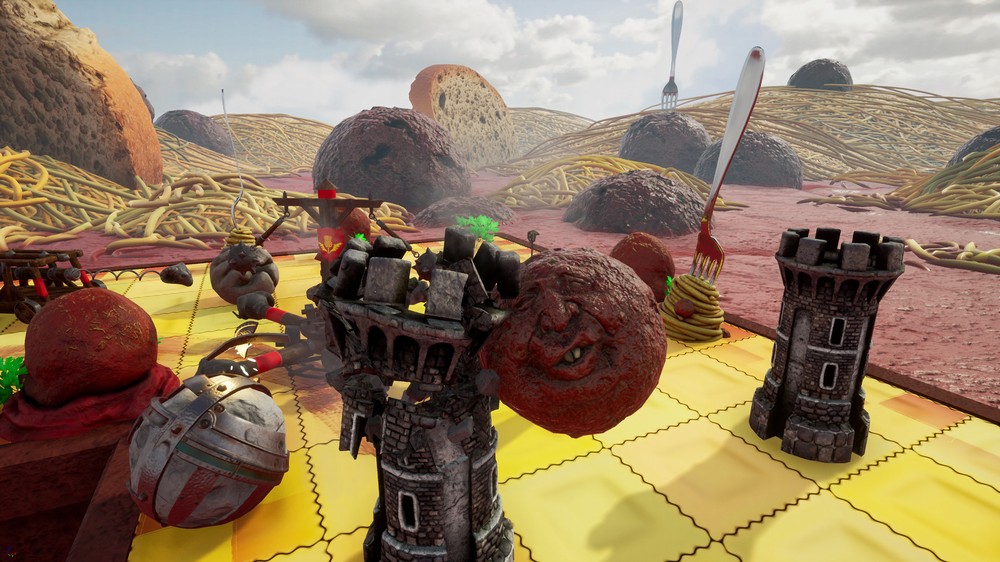 On one level the computer setup a group of fans in such a way that I was blown off the track with no way to advance.   Another round had me getting knocked off the level by these spinning battering rams and when the hand of God placed my rock back into the word it was right back in the spinner where I died again…over and over until I had to restart.  In other places where I rolled off the edge the game would reset me in a spot that required a certain amount of momentum to proceed but I didn’t have the space to build up enough speed.  The only other game where I was continually forced to reset/restart levels this much was that Trials motorcycle game.

Thankfully, Rock of Ages 3: Make & Break does have several modes I could tolerate, a few I even enjoyed until I didn’t, as the game managed to sap all the fun from those modes as well.  There is a mode where you are rolling a giant bomb with a burning fuse and you need to get into the castle and blow it up before the bomb goes off – the faster you do it the better your medal and star reward.  Another mode has you racing through levels smashing these target symbols then launching into a Skee-Ball game to earn a multiplier for everything you picked up along the way.  Of the 20-30 attempts at this game I only arrived at the Skee-Ball table first but it didn’t matter because the computer never actually tries to smash the targets along the way.  I could still easily win the one star for score but you do need to get the 5x or 6x multiplier to earn the rest.  The other mode is a pure race mode that has you racing two other opponents on various tracks loaded with obstacles.  These races varied in fun but eventually showed their imbalance when a tiny meatball or a cheese wheel was able to bump my massive boulder and send it flying off into molten spaghetti sauce.  It doesn’t matter if you hit them or they hit you – the result is that you always fail. 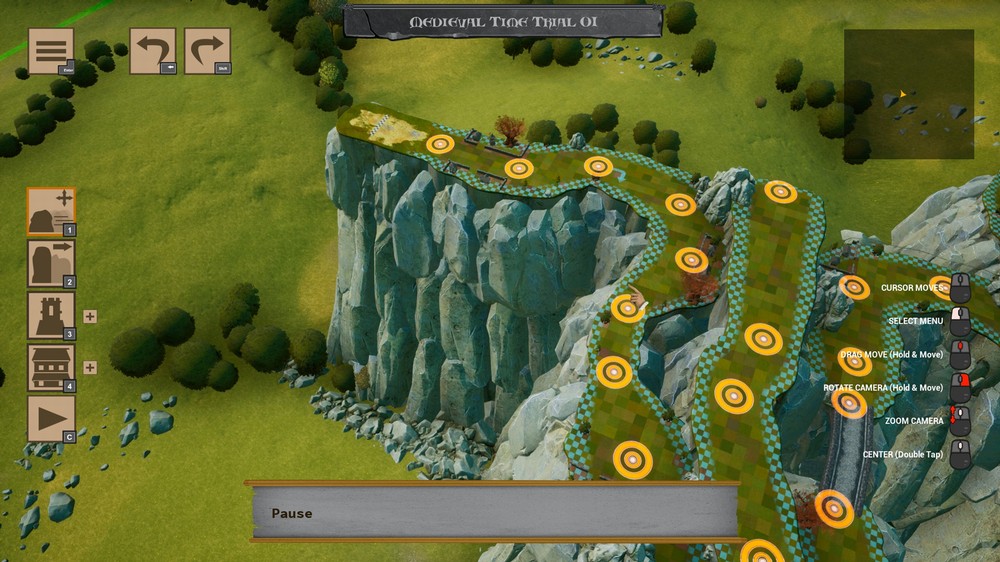 While lacking the same level of charm and sophistication as the previous two titles, Rock of Ages 3: Make & Break delivers that same essence of irreverent humor.  The developers have picked some classic moments from history along with some other random yet interesting topics.  The graphics are fun and the music is fantastic with perfectly chosen themes for many of the levels that maintain the proper sense of urgency and energy.   The game graphics are a slight step up from the previous titles although numerous assets have been repurposed.  While the rock-rolling plays better with an analog stick trying to accurately place defensive units on the map grid requires the precision of a mouse.  The same goes for any time spent in the level editor.

I genuinely enjoyed this game for the first couple hours; suspiciously the time allowed for a Steam refund, but somewhere in that third hour and beyond I truly began to hate Rock of Ages 3: Make & Break.  It was brutally unforgiving and seems to punish the player with every new game mode and every race and attack round within those modes.  It’s easy to deal with when you have options on the map, but eventually you’ll finish all the stuff you enjoy and have stars for and then you have to ask yourself how much hell you want to put yourself through to unlock more of the same punishing gameplay.  I had lots of laughs and fun memories from the first two games, but the third just seems like a bad dream I want to forget.  There is a solid foundation for some serious fun here, but in its current state Rock of Ages 3: Make & Break is a pile of rubble that needs to be avoided. 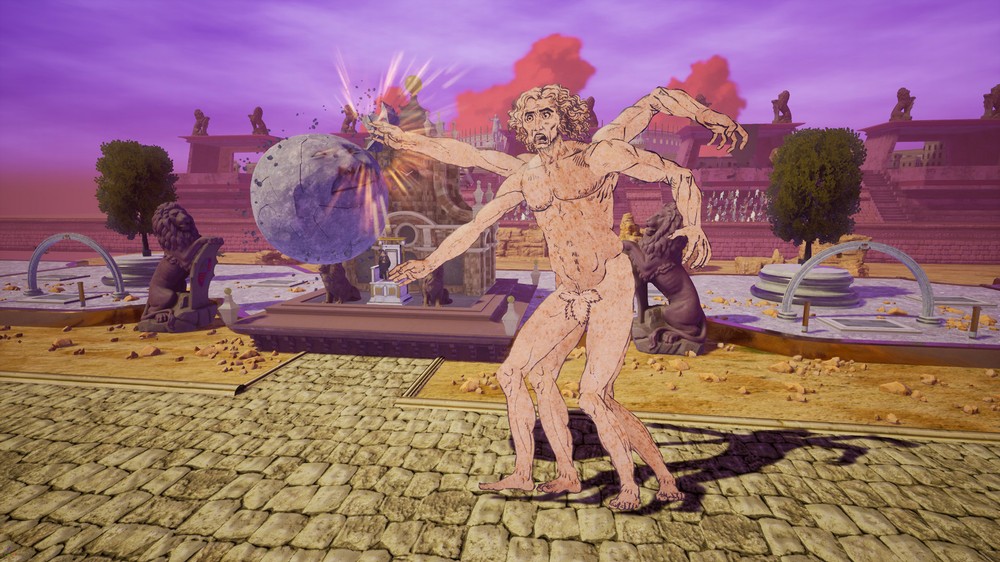 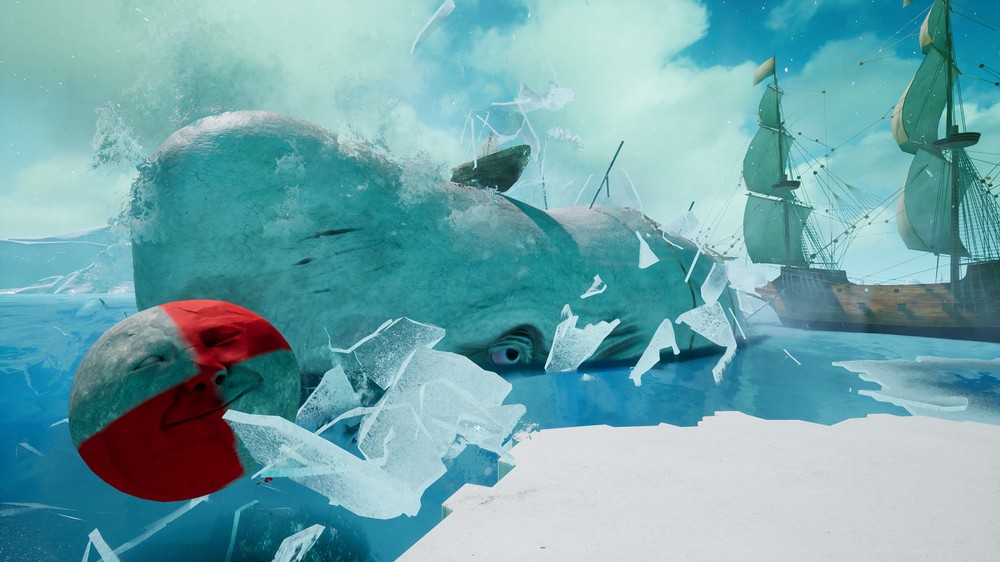 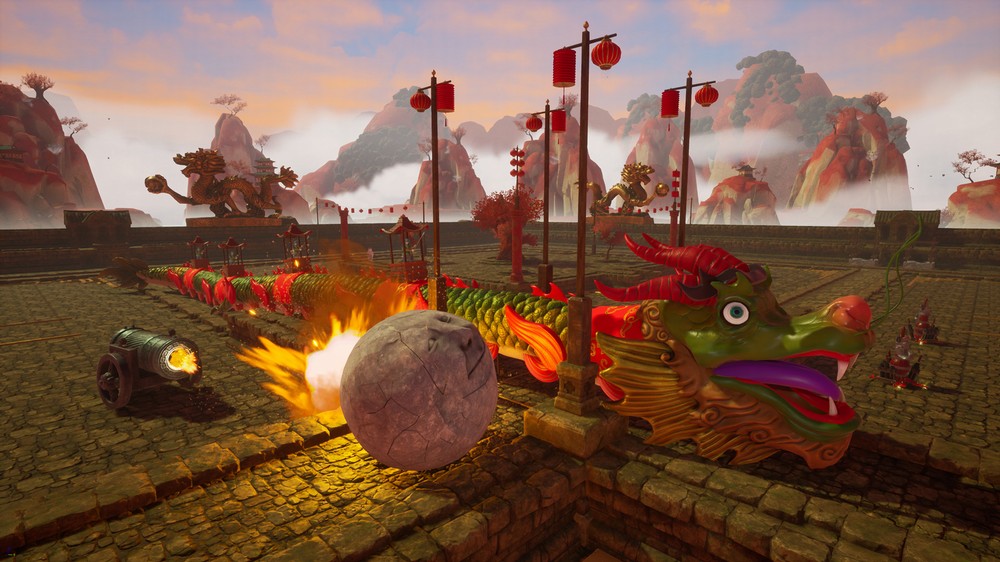 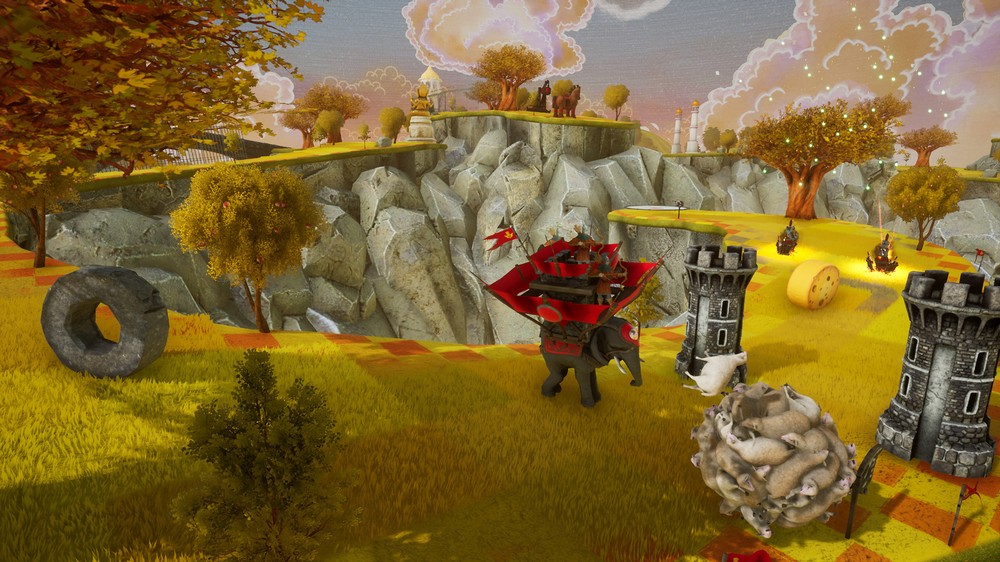 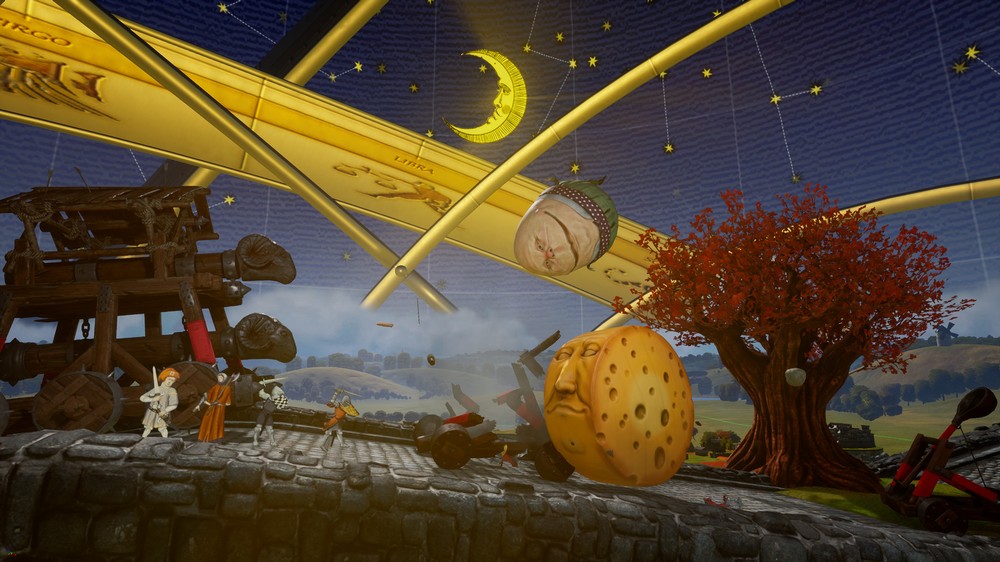