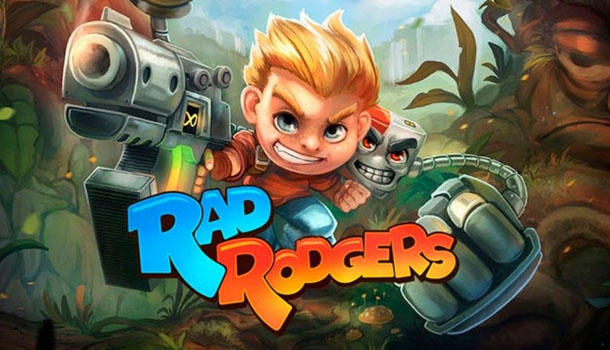 Classic 90's design and themes disguised in a next-gen wrapper.

Rad Rodgers clearly falls into the category of “why have I never heard of this before?” I love games like this, so the fact that this game has been around since 2016 and I never heard about it until the remake is unforgivable.   I just don’t know who not to forgive. Anyway, thankfully, THQ Nordic is running around buying up old properties and remastering them and Rad Rodgers is one of them, so even though it’s been more than a year since the original, I finally get to play and tell you about one of the coolest arcade platformers you can play on PC.

For those of you who owned the original World One game, your Steam library will automatically get this new version; a version where they dropped the subtitle and added a whole bunch of new features and content including: 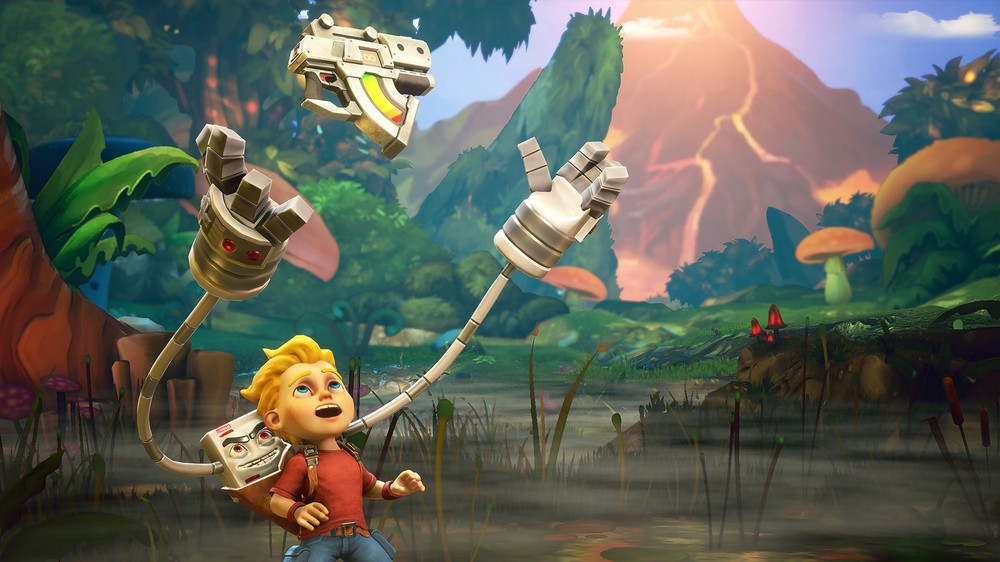 Rad Rodgers tells the tale of a young boy who loves his video games, and after one late-night gaming session, after being forced to turn off his “toy” and sent to bed by his mom, he wakes to find his console has turned itself back on. When he investigates he is sucked into the TV and into his very own video game along with his companion (and game narrator) Dusty, who just happens to be a sentient retro game system. Dusty provides exposition for the player and wisecracking advice for Rad through the upcoming adventure.

While backstory in a platformer is generally unnecessary I did appreciate the lore the designers wove into the levels to tie them together, both in theme of design and purpose of play. The story of a jungle world gone bad and an Elder Tree guardian that required saving called me back to my days with Ori, but Rad is much more rambunctious and a tad more violent. It’s worth noting the Mature rating for Rad Rodgers, considering how innocent it looks in screenshots and trailers, but there is plenty of weaponized violence and frequent salty language from Dusty and the NPC’s you’ll encounter. You can censor the language in the options if you want to play with or in front of your kids. 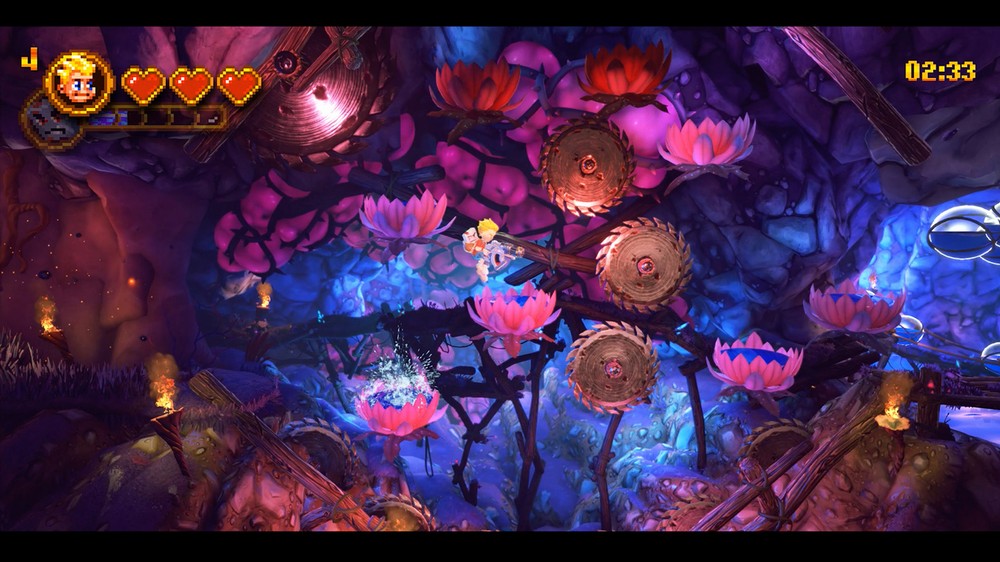 Obviously, gameplay focuses on running, jumping, climbing, and exploration or wildly creative levels loaded with baddies, environmental puzzles, obscure encounters seamlessly painted into the gorgeous scenery, and more collectibles than I care to count. Your thoroughness in gather these items along with your speed for completing each level all factor into your end-stage score which is tracked on the newly added leaderboards.   Most levels are fairly short and completed in minutes, so going back to replay them for better times or to find missing items or cleverly hidden Easter Eggs provides much of the long-term enjoyment and value for Rad Rodgers.

The presentation is off the charts; especially for what many would consider a budget indie titles. Between the gorgeous cutscenes and character close-ups to the smooth-scrolling colorful levels, Rad Rodgers often takes on the look of a classic Don Bluth animated feature.   The use of colors, special effects, and old-school parallax scrolling gives this game a distinct 3D flavor creating an immersive world you wish you could explore more. 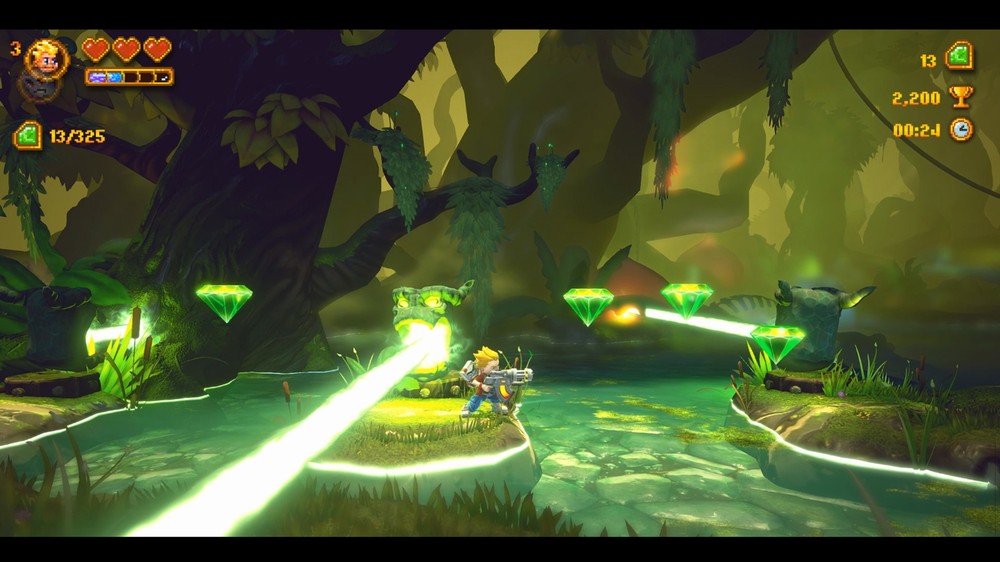 Perhaps the most unique feature of the visual design is the Pixelverse; a sort of parallel dimension lurking behind the spectacular visuals of the main game.   There are secret areas of the game that seamlessly transition into pixelated 8/16-bit graphics, and even Rad will get all blocky when he explores these areas. Other times you’ll encounter tears in the game-verse that you must enter and repair faulty game code to progress in the game. An early example is when you encounter a gap with a missing ledge that a programmer forgot to put into the game. You’ll need to enter a dark void and play a short mini-game to find and restore the missing ledge.  I also appreciated the subtle use of a pixelated UI to keep that 90’s flavor alive throughout.

The audio perfectly complements the visuals with a retro-style score by composer, Andrew Hulshult who made perfect use of synthesizers and classic MIDI music from the 90’s that all games used back in the days of Adlib and SoundBlaster audio cards…or if you were rich, a Roland MT-32. The voice acting is surprisingly excellent for main characters and NPC’s alike. Dusty had me cracking up with his banter and 4th-wall-breaking wisecracks. 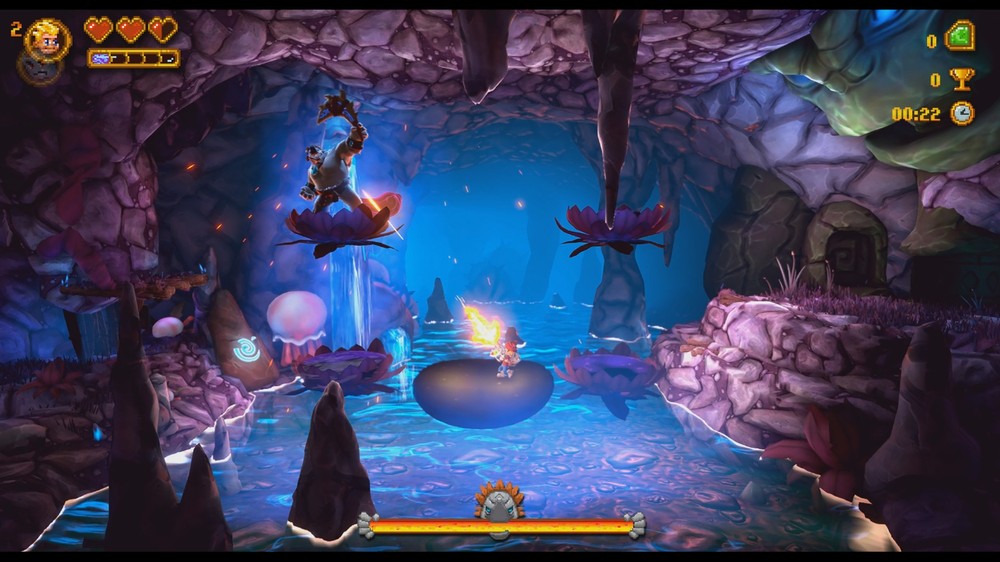 Rad Rodgers does have a steep increase in difficulty near the end. Most of the game will provide a moderate challenge for most gamers. Playing on Normal starts you with three lives, and extra lives are fairly easy to earn and you’ll need them about the time you hit level 7. By this point in the game the levels will take 15-30 minutes and if you die you have to restart from the beginning, so things can get frustrating near the end if your skills aren’t on point. You’ll certainly die a few times in the game, which turns this 3-5 hour game into something more like 8-10, and that doesn’t include replay levels for time or missing items.

If you’ve been looking to relive your platforming past or just want a fun, challenging game loaded with action and saucy humor then look no further than Rad Rodgers. Sure, there are a lot of these type of games flooding Steam everyday but given the quality of gameplay and the pure enjoyment of playing this charming platformer, Rad Rodgers is more than worth the $20 price and an even better value if you can find on sale. 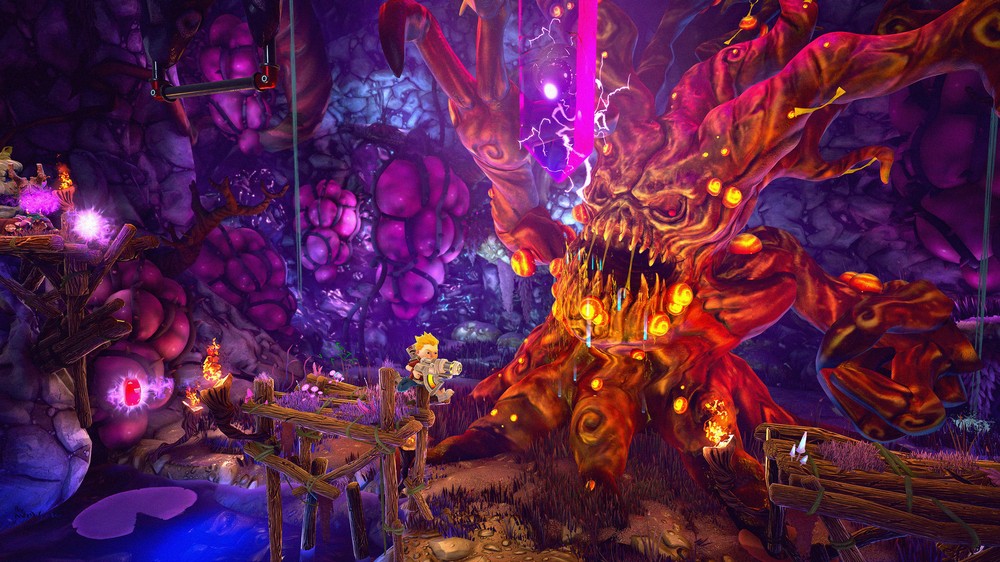