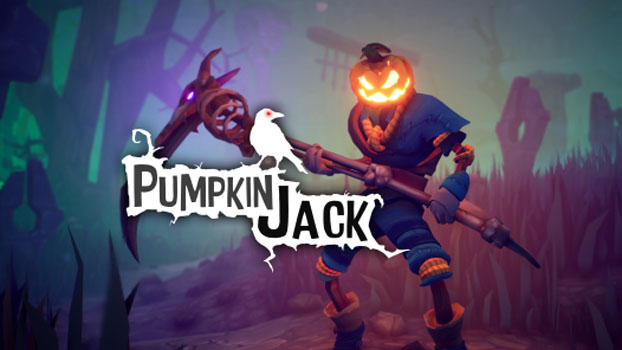 - Couple random glitches
- Over too soon

Some of the best fun I've had on my PC this year.

If you love Halloween as much as you love action-platformers then Pumpkin Jack might just be the best themed game ever made.  From the opening menu to the closing credits this game just oozes Halloween style and flavor with so much varied content you might find it hard to stop.  I finished the 6-8 hour game in just two sittings…it’s THAT GOOD!  Perhaps even more remarkable is that this game is “mostly” the product of a single individual – yes there are a few dozen supporting names in the credits but in a day where AAA credits run 15-20 minutes or longer I was shocked when Pumpkin Jack’s credits were over in less than 2-3.  Despite the minimal dev staff, the resulting game easily stacks up with any similar game on the market, both in visuals and art as well as game design and even some impressive advanced features like RTX, DLSS, and HDR support.

But I get ahead of myself.  Pumpkin Jack is a cartoonish, charming, and devilish platformer that has you assuming the role of Jack, the Mythical Pumpkin Lord and right-hand to the Devil himself.  In a rare twist of events this game has you playing on the side of evil, as Jack is sent to Earth to stop a meddling wizard from interfering with the Devil’s plans to spread chaos on the planet by unleashing hordes of horrible monsters to torment the population.  Pretty dark stuff, but the vibrant colors and unique character designs combined with delightfully humorous dialogue and crazy action balances the content with a distinct Tim Burton vibe. 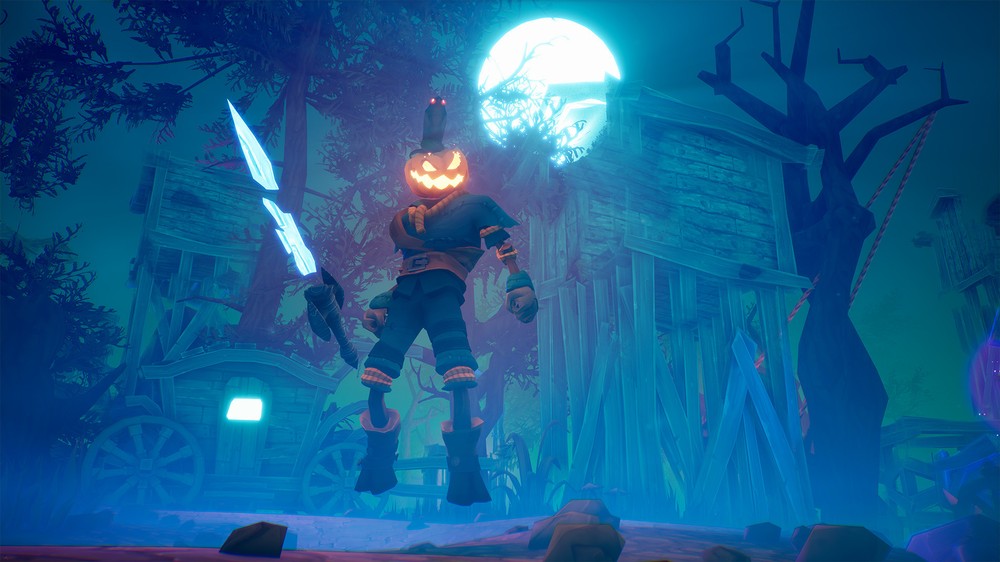 As Jack, you’ll find your soul has been stuff into a pumpkin and stuck on a scarecrow’s body.  You’ll get instructions and mission updates from a sassy owl and a slightly annoying crow will quickly become your faithful companion and useful weapon throughout most of the game.  Speaking of weapons, you have an impressive assortment of items to dispatch hordes of mindless monsters.  You’ll start with a shovel then earn others by defeating level bosses like a shotgun, sword, staff, and scythe.  There is also a creepy Skin Vendor hidden away in each level, and here you can buy costumes for Jack like The Lumberjack, Cowboy, Samurai, Inspector, Skeleton, and the Buzzard.  These skins are unlocked by spending Crow Skulls that you collect; 20 are hidden in each level.  Also hidden in each level is a Gramophone (record player) that you can find and watch Jack do an amusing Jack.  Naturally there are achievements for finding all this stuff, and there is a level select in the menu that lets you replay levels to find anything you missed.

Pumpkin Jack is a delight to play.  The gameplay unfolds with silky smooth framerates and fluid animations.  The camera is entirely manual with a few small exceptions for on-rail events.  Most of the game is exploration and combat…lots of combat with a fun variety of monsters that are fairly easy to dispatch.  The game isn’t that hard with the exception of the boss fights, and even those have patterns you can quickly figure out.  There is a bit of strategy in finding out which weapons work best and which enemies to target first and when to use your crow as a ranged weapon.  Some enemies like ghosts and rats spawn from environmental objects that need to be destroyed to stop their endless spawning – like the monster generators in Gauntlet. 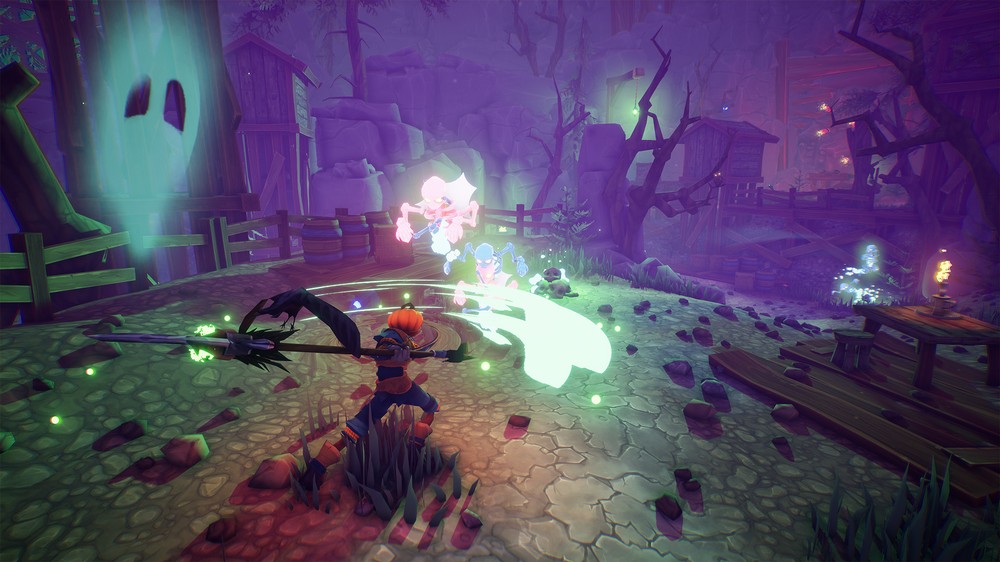 There are only a five chapters, each with a very specific themed environment that heavily influences the level design, the monsters, and the activities within that level.  You’ll start the game in a field after crawling out of the crater you just created when you hit the ground like a comet.  After a quick briefing with the owl and hooking up with your crow-friend you set out exploring the countryside killing monsters and collecting skulls.  Lots of stuff like barrels and crates can be smashed for small bits of health, and strategically placed cauldrons serve as bubbling checkpoints and health potions.

Every level has some sort of crazy on-rails action sequence.  In the first level you are racing out of a burning barn and the next will have you on this wild mine cart ride.  Later you will ride a horse through a swamp, go on some dangerous ferry rides, and even dangle below a flying gargoyle as it flies through a creepy cemetery.  These are some of the most thrilling moments in the game and break up the slower combat/exploring sections.  You also have brilliant platforming stages where you jump across bouncy mushrooms or activate magic towers to create invisible bridges between floating islands.  At least once in each level you will also need to detach your head and engage in mini-games like musical Simon or a tombstone matching game of Concentration, or maybe push a bomb into a crate of fireworks.  Playing as just the pumpkin head is a pretty cool concept and adds variety to the gameplay – like playing as Clank in a Ratchet and Clank game.  The sheer amount and variety of content is quite amazing; you will never be bored. 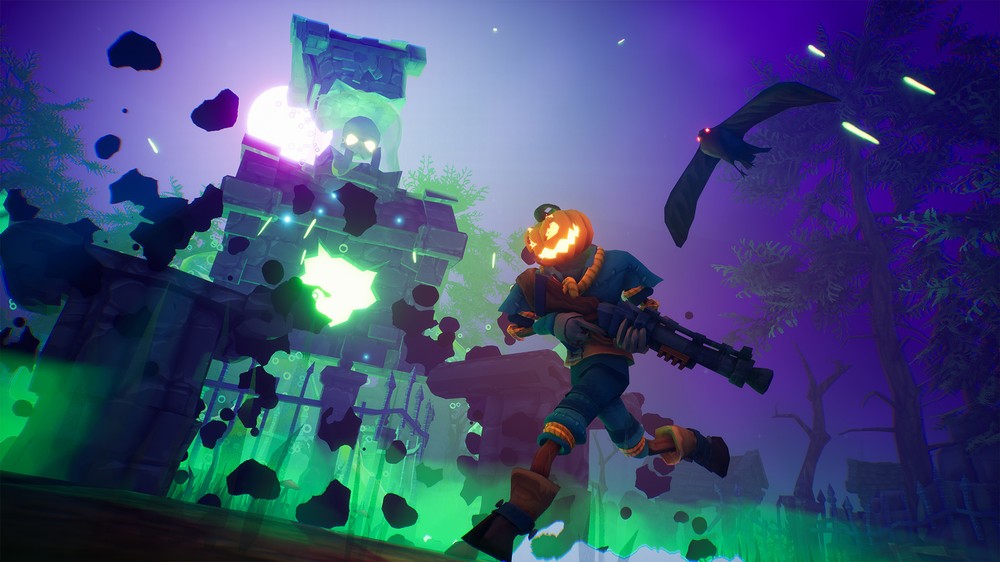 The presentation is awesome with amazing CG cutscenes between chapters, all fully voice acted.  I really hope they do a special edition of the game with voice acting for the rest of the game.  The dialogue is so cheesy and hilarious I would love to hear it performed…especially the crow.  The surround sound audio is fantastic with insects and creaking wood, combined with all the sounds of monsters and combat totally immersing you in a 7.1 mix.  Every chapter has a theme and distinct color pallet and there are all sorts of crazy lighting and special effects going on.  Volumetric fog and mist along with weather effects totally immerse you in the creepy atmosphere. If you are fortunate to have an RTX card you can enjoy some killer lighting and shadows that make the game really shine.  Sometimes the pinkish glow of a crow skull behind a stack of crates was the only way I would have ever found one.  The detailed environments, characters, and fluid animation are easily AAA quality, making this a showcase title for RTX, and with the newly added HDR support the visuals totally pop on an HDR screen.  There are lots of scalable options to get this game to run smoothly on a wide range of systems.  With RTX on and everything set to max detail I had to render at 1440p to keep things smooth on my 2080ti card.

There were only a few oddities and glitches that come to mind.  The prompt to Talk/Interact doesn’t always appear.  There was one checkpoint in a forest maze that starts you off facing in the opposite direction you should be going.  Died 68 times figuring that one out; yes the game counts and comments on how many times you have died.  In one level where you are smashing statues of the Seven Deadly Sins one of the statues wouldn’t break.  I had to exit and reload the save game and it worked the second time.  Also, the vsync in the video options would randomly turn off (even though it said it was on), so I had to turn off then back on for it to re-engage, otherwise there is some crazy screen tearing.  My only other minor critique is that while vastly different in theme and design, the circular boss fights got stale about halfway through the game and some, like the one in Skele-Town, had foreground architecture that would obscure the camera during critical events.

I had a blast playing Pumpkin Jack and was genuinely sad when it was over because it looks like the story is just getting started.  I hope this game does well so we can get a sequel, but I also hope the dev team stays small and doesn’t go “corporate”.  It’s easy to see this was a 4+ year labor of love and I hope everyone who enjoys this kind of game gets to play Pumpkin Jack.  Maybe it will come to PS5 and Xbox Series X and take advantage of that tech.   For now, Pumpkin Jack is one of the best PC games you can play this year and easily one of the top five Halloween games ever made. 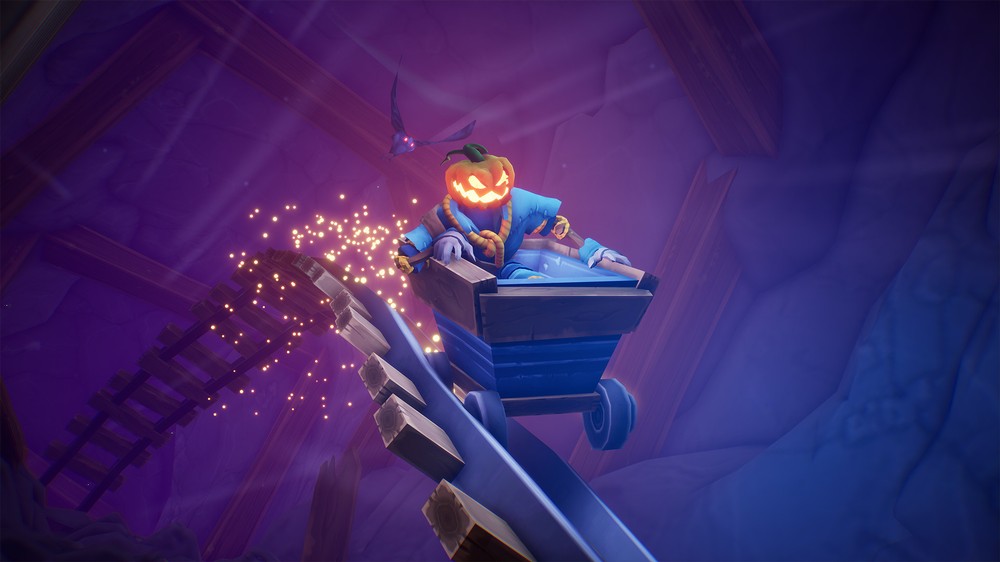 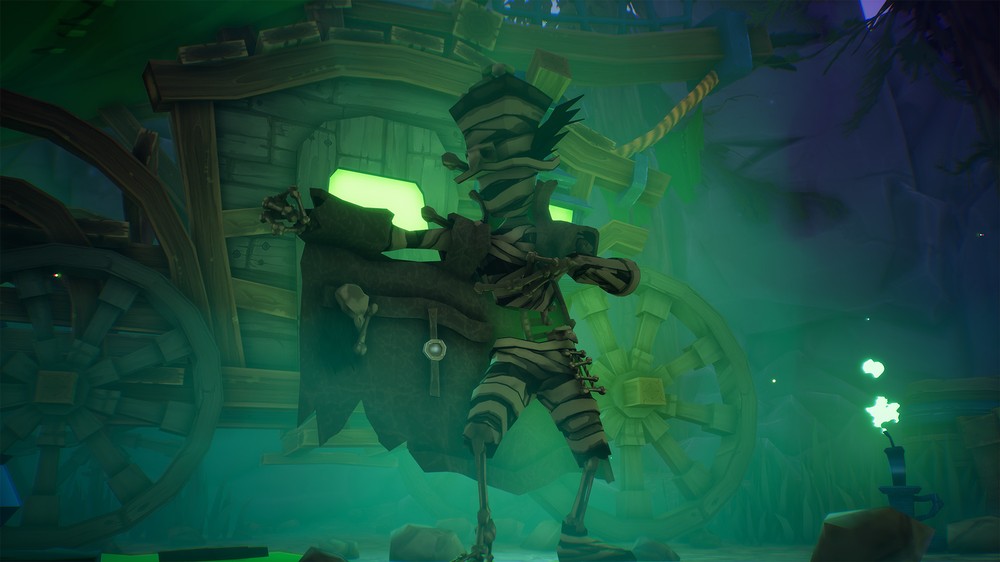 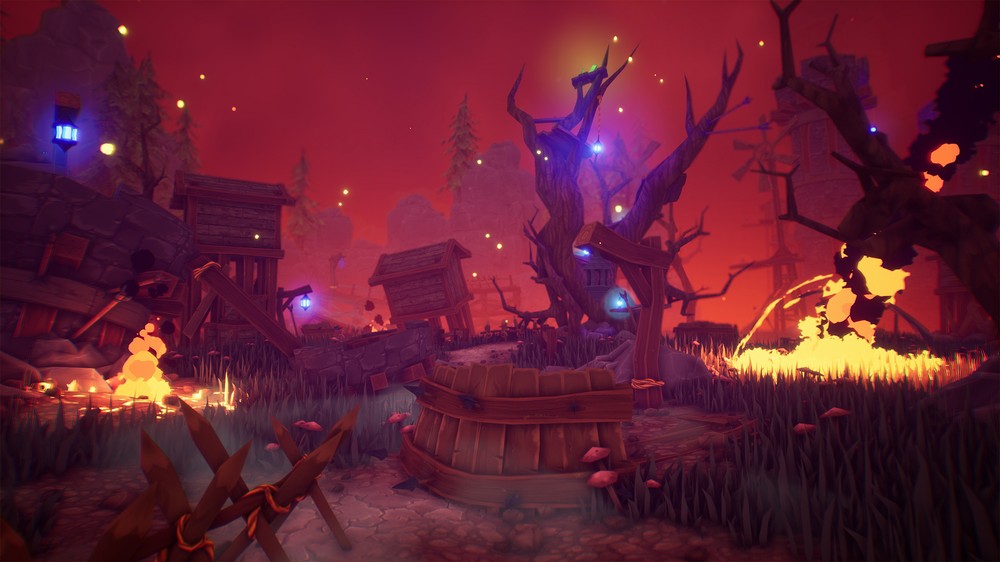 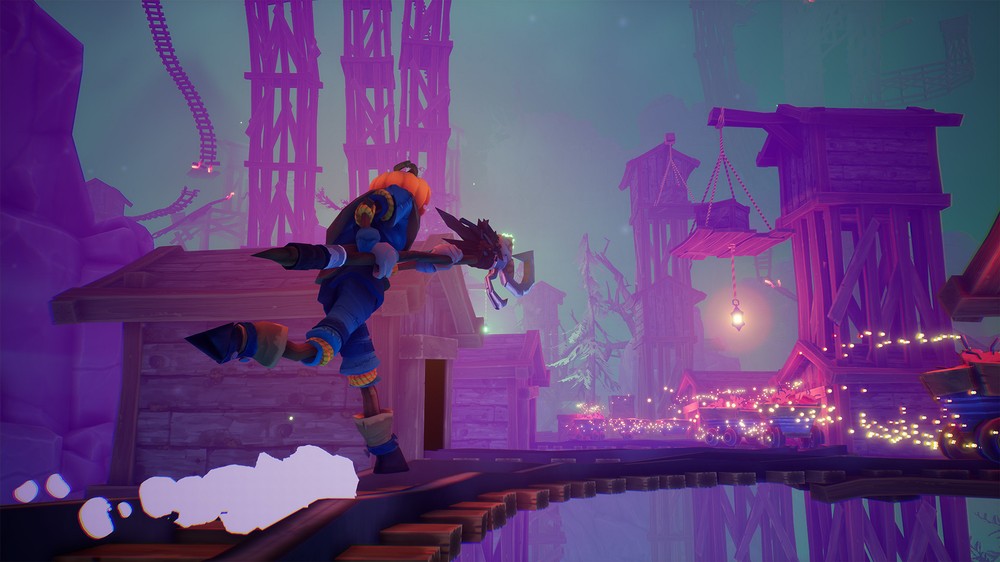