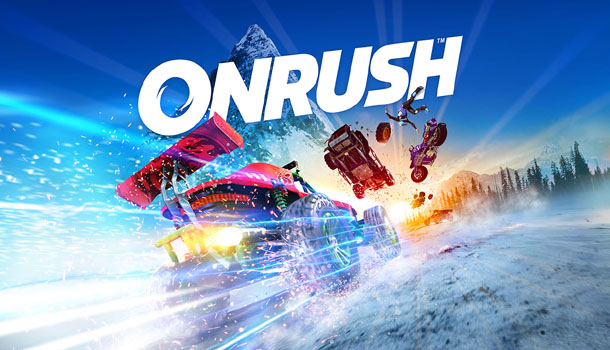 Onrush is a visionary new arcade combat racing game that defies the traditional rules of racing and dares to offer something new, thrilling, and surprisingly addictive. It blends the multi-car pack mentality of MotorStorm with the slow-motion takedowns of Burnout then throws in cosmetic loot boxes, an XP progression system and match challenge objectives that will have you replaying events for maximum points.   The cars, trucks, and motorcycles all fall into distinct classes, and vehicles have unique “attacks” and “powers”, which, when combined with the familiar orange and blue color schemes will have Overwatch fans feeling right at home.

I’m sure you’ve all heard the phrase, “There’s no I in TEAM”, and that fits perfectly with Onrush’s core design built entirely around team racing. It doesn’t matter that you come in first or even last as long as your team wins.   Sure, you get recognition for MVP and various other performance call-outs in the post-race wrap-up, but Onrush is truly built around teamwork. Races don’t even have finish lines to cross. All of the events are won by hitting progression markers or keeping the clock alive, and many races are best of three rounds with each round following the previous with no restarts. 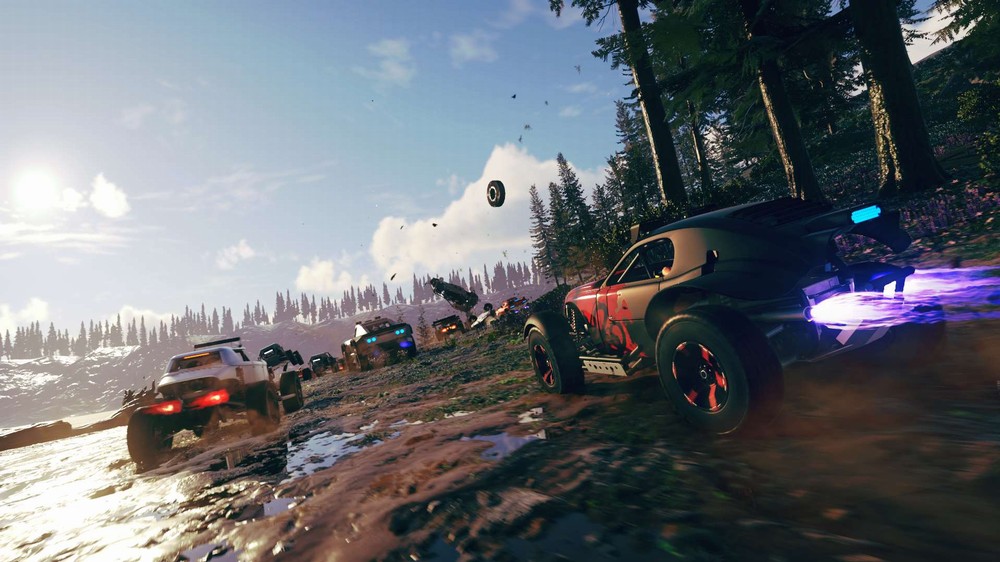 Regardless of class all the vehicles share Onrush’s unique driving and weaponless combat model that is fueled by the Overdrive system. To earn boost you must catch big air off the jumps, takedown opponents, smash into the ghostly gray fodder vehicles, and perform vehicles-specific actions like doing crazy bike tricks. Mashing the X button kicks in the boosters for extra speed, but since winning isn’t about placing first you need to use that speed to catch-up to and attack other vehicles. All the while your Rush Ultimate percentage counter is ticking up, and when it hits 100% you can press triangle to unleash all sorts of cool class-specific attacks and abilities.

While primarily a multiplayer game, Onrush has a substantial single-player component comprised of six themed events, each with 5-10 races per event with each race also having specific and optional Match Challenge goals that award you with bonus XP and other loot. For the most part, the bots in Onrush are pretty good despite the obvious and intentional rubber banding built into the game to keep all the racers within competitive combat range. Again, with no finish line, winning races is all about interaction and if you fall too far behind the pack the game will warn you to catch up and then teleport you back into the carnage if you don’t. 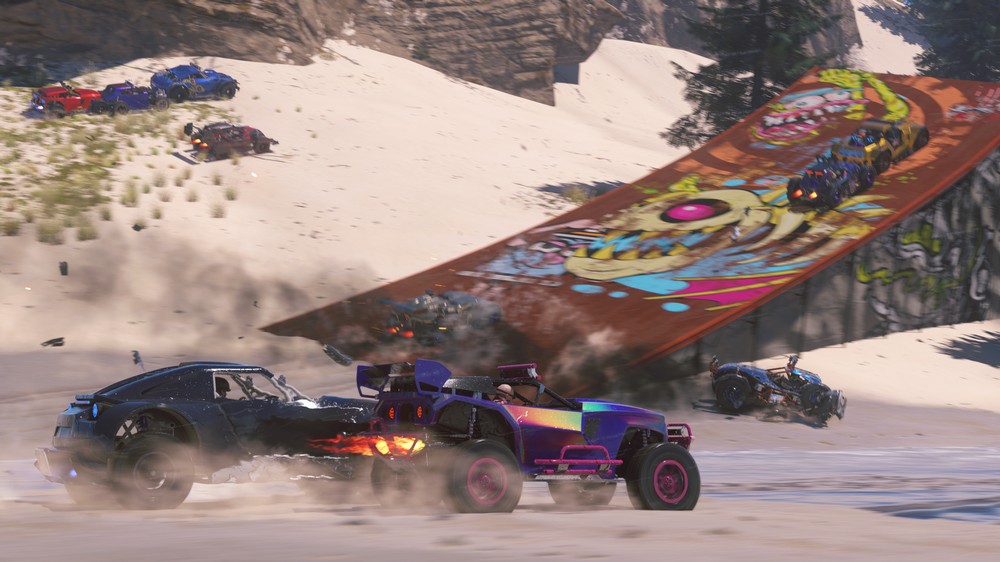 There are numerous race types, each explored in-depth throughout the solo campaign that will prep you for online multiplayer. One type will have you simply racing through checkpoints to add precious seconds to the timer to keep the race alive – the first team to run out of time loses. Lockdown is one of the more ingenious modes and has you trying to capture a moving circular zone. The more cars you have in the zone the faster you can capture it, but if enemy cars are also in the circle it can slow or even switch to the other team’s capture, forcing you to try to knock cars out of the circle or take them down entirely. It’s a really cool high-speed game of tug-o-war.

Switch is another great and highly original race mode where you race on a bike, car, then truck, racing until you wreck then switching to the next stronger vehicle. This mode creates a unique balance of cars on the field that is constantly changing and creates some suspenseful moments if you can manage to stay on your bike while the opposing team has switched to cars or trucks. For those looking for a traditional racing experience, Overdrive is as close as it comes. There are still no finish lines, and the only way to win is to expel the most boost, which means lots of jumps, takedowns, and insane driving. 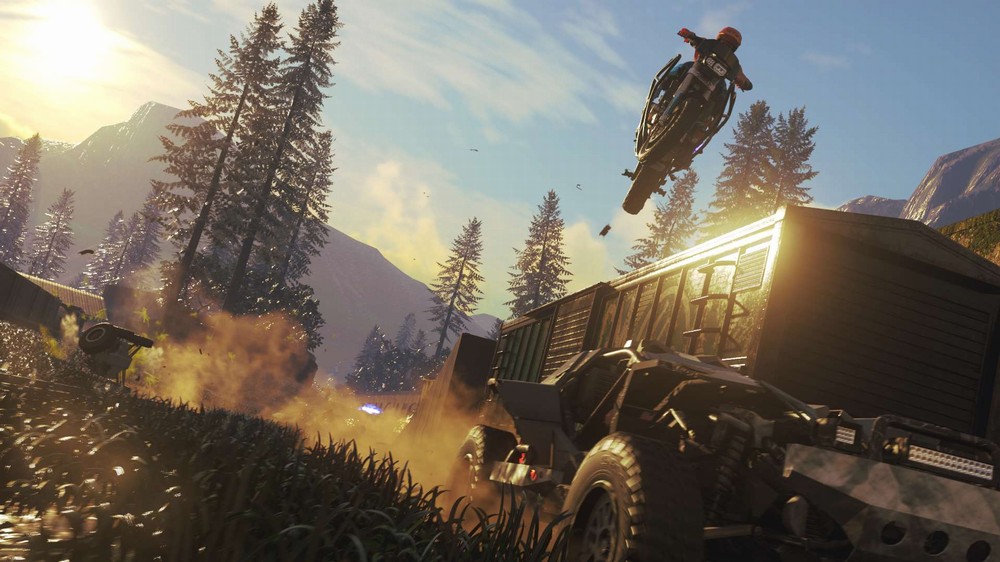 Onrush has some great scaling capabilities depending on your type of PS4 as well as your preference of framerate versus resolution. Personally, I feel the game plays much better at a smooth 60fps, which the Pro can deliver at 1080p (900p on standard PS4), but if you’d rather have higher resolution then prepare for 30fps on the 4K Pro or 1080p on a standard PS4.  The HDR support for Onrush is gorgeous, adding extra realism to the environmental lighting.

The game visuals are exceptional with 12 fantastic track designs complete with branching paths and hidden jumps and shortcuts. The car and player graphics are just as good, and Onrush has a huge library of cosmetic upgrades for wardrobe, car skins, tombstone graphics when you crash, and even UI upgrades like profile banners. You’ll frequently earn loot crates you can smash to unlock these cosmetic rewards. These are internal loot boxes; nothing to buy or pay to win. Once in motion the sensation of speed is awesome with all sorts of visual effects, gorgeous environmental textures, and thrilling slow-motion takedowns. There are fun trick animations for bike riders and cool dance moves you can unlock and use to customize your drivers for the post-race wrap-up. 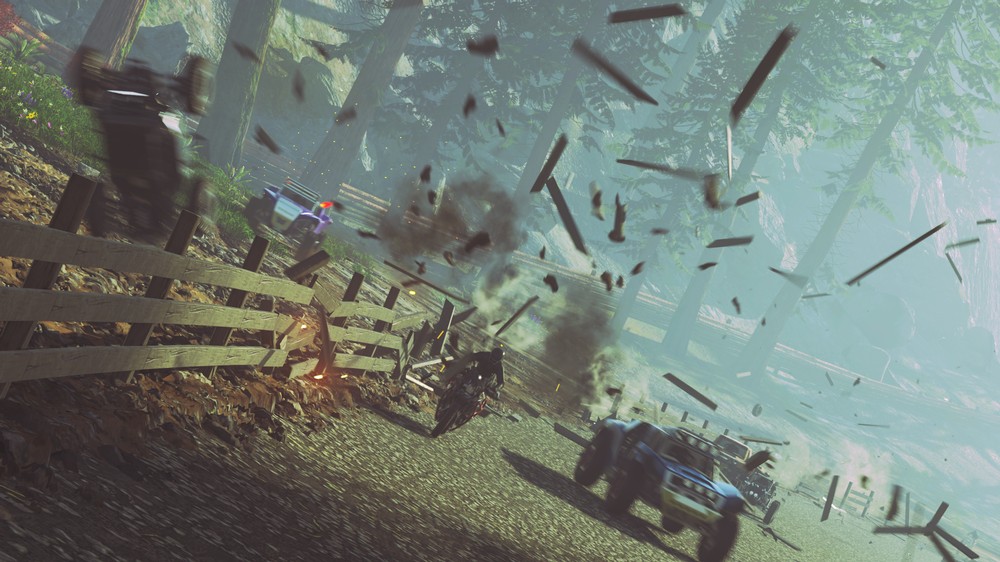 When it comes to the audio all I can say is CRANK IT UP! The music is awesome and the sound effects of a dozen engines combined with powerful crash effects and the booming (almost satanic) voice of the commentator all creates a sensory overload. Combined with the graphics, this is high-energy racing unlike anything you’ve played before.

I only had a few issues with the game, the most egregious being the game’s reliance on online connectivity, even when not playing online. This wouldn’t be an issue if the servers weren’t prone to crashing.   I’m actually writing this review because the server just crashed during one of the final races in the single player game. Technically, you can keep playing but no progress is recorded while offline and the Quickplay and Rank menu options are completely disabled. Over the past couple weeks I’ve been kicked into offline mode at least a dozen times, and the only way to see if servers are back up is to keep reloading the game. 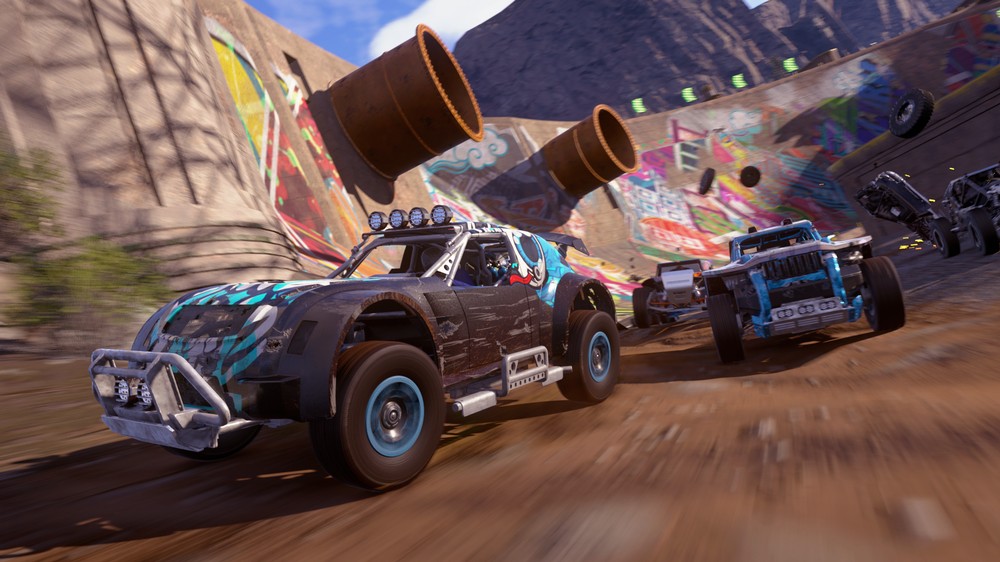 My only other minor issue was the AI for the bots in the single player game; mostly in the Lockdown races. Capturing the zones is hard enough with human players, but when your AI teammates are scattered about the track and the opposing team is clustered together in a tight formation inside the circle it’s hard to score. Interestingly enough, once the opposing team has scored four or five of the required six points my team suddenly comes to life and makes these dramatic comebacks. Sure, it adds suspense to the event, but it also adds a lot of frustration and stress when my team bots aren’t playing smart early in the race.

Aside from those issues, Onrush is a thrilling, competitive, and super-addictive racing title; something I’ve been waiting for since the last MotorStorm game. The variety of race types, the endless supply of unlockable cosmetics, and the entire team versus one-racer mentality makes this game fresh and highly entertaining. You can bring along a friend for co-op racing in the Superstar Campaign then turn the racing up to eleven when you head online for the ranked matches with up to 12 players. There is also a fantastic tutorial system in place with helpful videos covering vehicles classes and race types.

Onrush is available in a standard digital release as well as a Deluxe version that bundles in eight new vehicle designs and additional cosmetic upgrades for $15. No matter which version you choose, race fans will not want to miss out on this insanely fast, fun, frantic, and furious racing game. Get it now while the community is thriving. 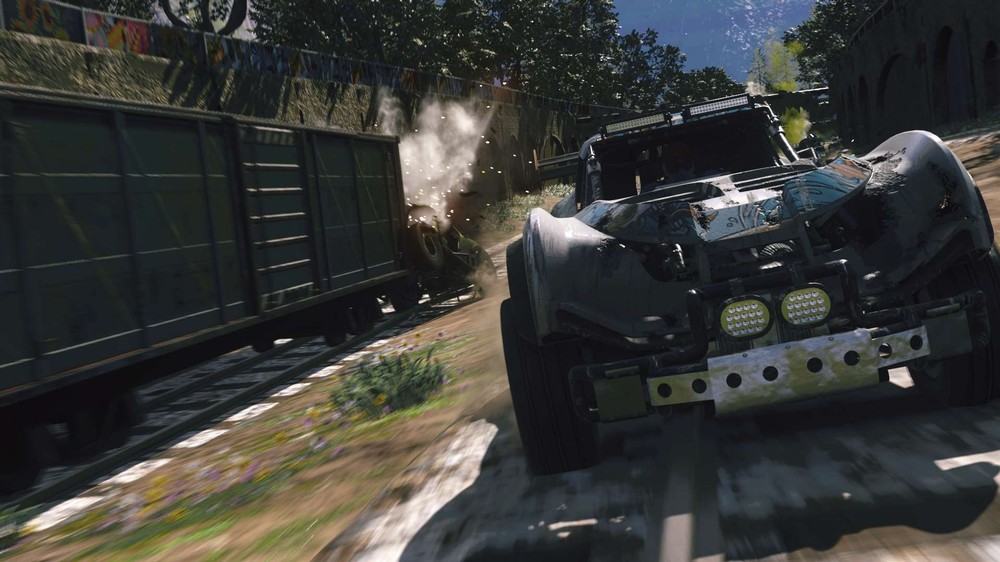 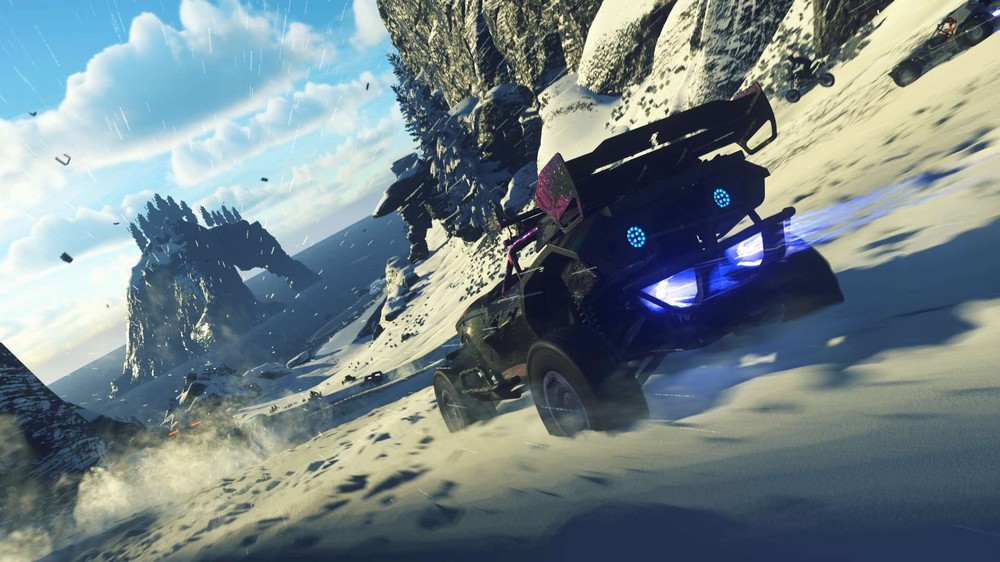 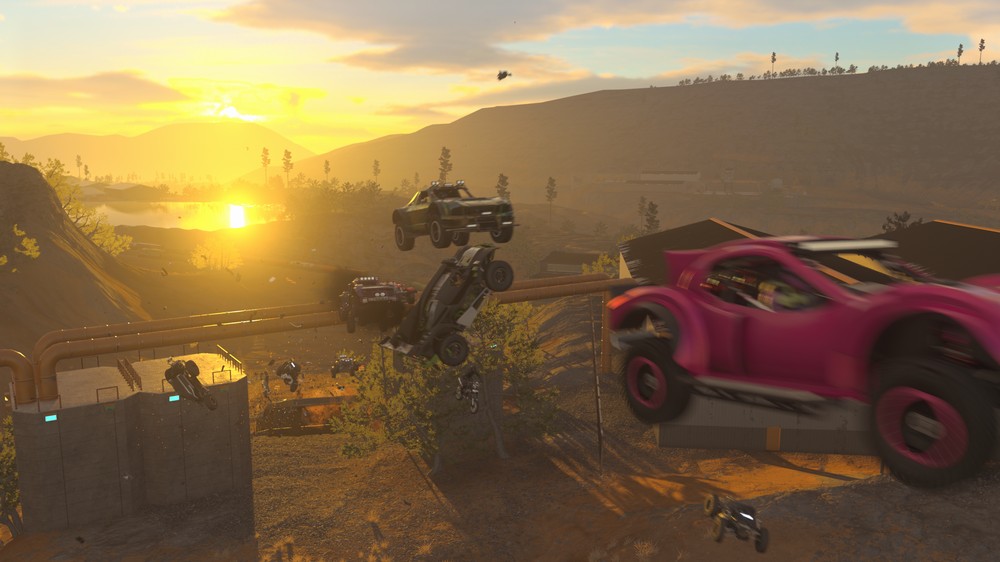 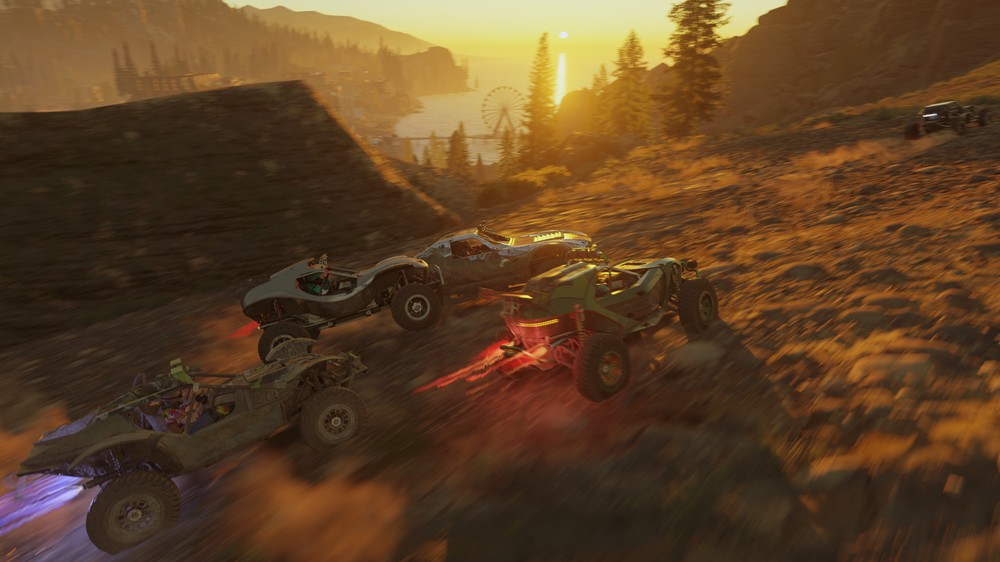 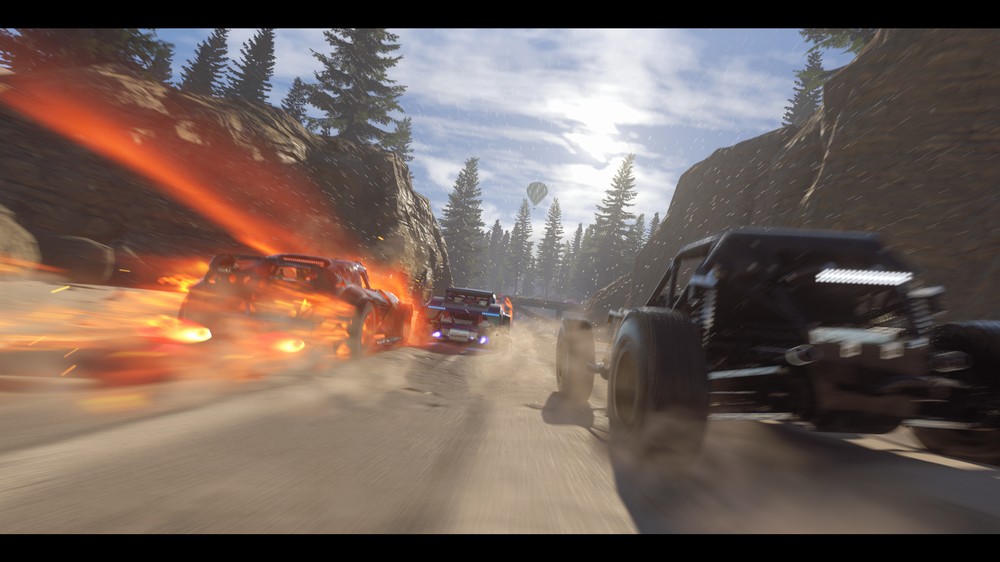 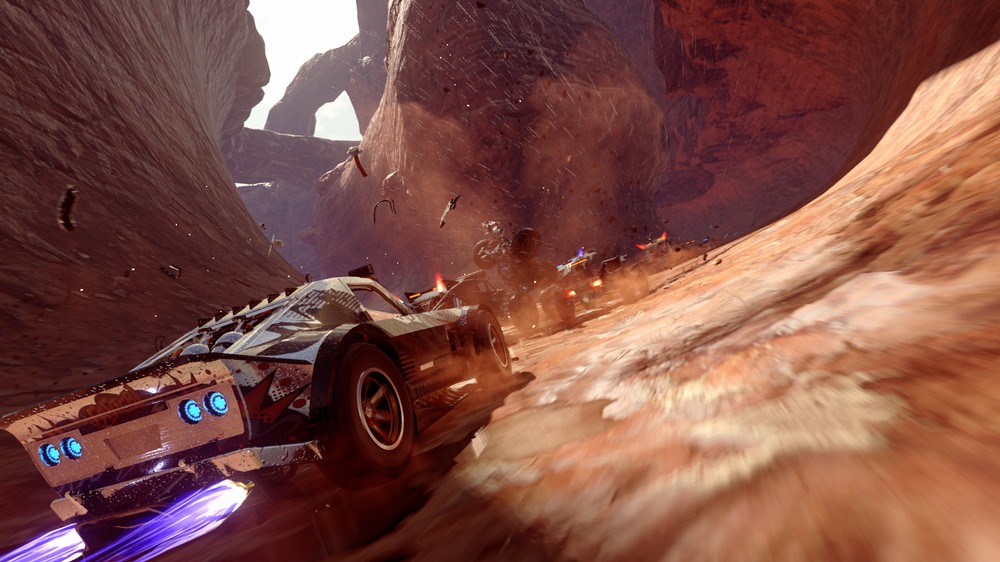 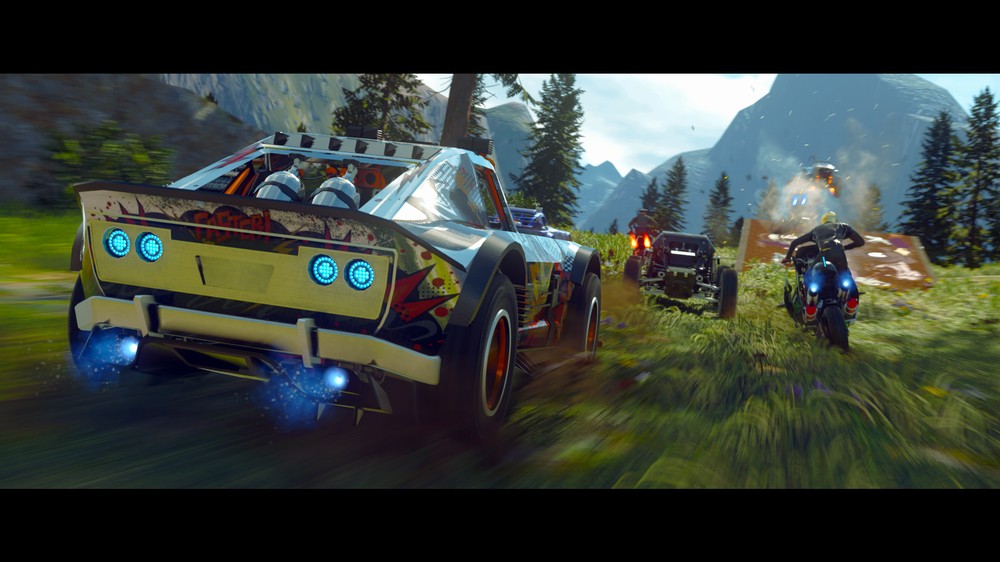