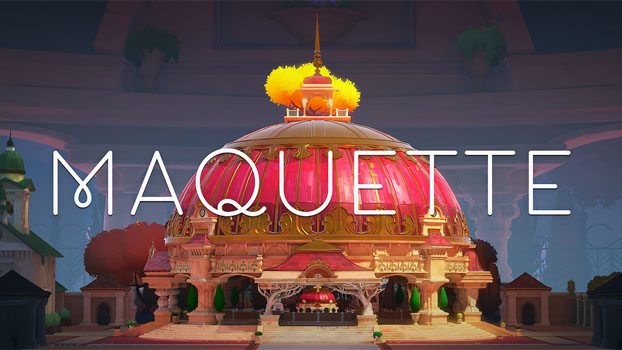 Maquette is the French word for “scale model”, which perfectly fits with Graceful Decay’s new adventure game that blends heavy doses of narrative with casual exploration of magical fantasy environments and some thoughtful puzzle-solving.  Available on PlayStation and PC, I decided to review the PS5 version simply because there aren’t a lot of games out for that system, and I may have chosen poorly.  I found no immediate benefits to playing on the PS5, as the game didn’t make use of the DualSense controller or any of the system’s features.  I’m sure load times are better than the PS4 version but I’m guessing a good PC would be the best choice.  Despite the power of the PS5 I was getting frequent and noticeable framerate dips, especially if you stand in place and spin the camera 360-degrees you’ll probably get 5+ hiccups in the smooth panning.  There is also some severe motion blur going on that actually had me feeling queasy in places. 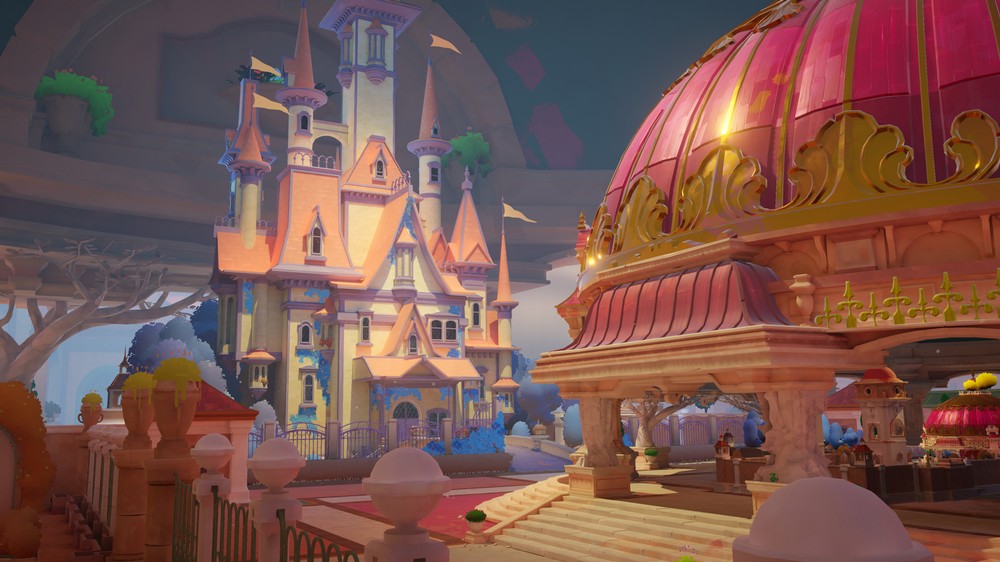 Gameplay is a traditional mix of exploration and puzzle-solving with a unique twist, unless you have already played a game called The Fisherman’s Tale, in which case the novelty of the concept is diluted. The world of Maquette is presented in such a way that your environment is just one of three identical locations all nested within each other giving you the opportunity to interact with a scale model of your surroundings that affect changes in the larger reality.  So you can take a small object within your world and place it within the model to have it reappear back in your world only much larger, or you can drop a large object in your world and retrieve a miniature version from within the model.  Later in the game you will also get to change size, much like Alice in Wonderland, and explore these other scaled versions of your surroundings.  In one part of the game you’ll enter a house and find a model of that same house in the living room, and after getting shrunken down you will then have access to that model, but in order to get to it you will have to traverse the “giant-like” exterior location leading back to it.

Maquette consists of seven areas that change up the scenery and continually expand upon the concept of scaling items to solve puzzles.  Each area generally has four smaller areas that spread out like a compass from the central maquette (model).  The game unfolds in linear fashion as you are led around by the story told with a combination of floating words, charming graffiti-like visuals, and some superb voice acting from Bryce Dallas Howard and Seth Gabel who really sell the relationship dialogue, probably because they are married in real life.  At the heart of Maquette is a love story; a story that is actually creating the world, as your memories build and shape these unique fantasy environments around you in real-time through your thoughts, emotions, and direct interactions.  Over the course of this 3-4 hour adventure we’ll get to eavesdrop on Michael and Kenzie’s entire relationship from their first chance encounter at a coffee shop to them dating, moving in together, and eventually their separation that seems to have sent Mike into some inner turmoil and depression resulting in the game we are playing. 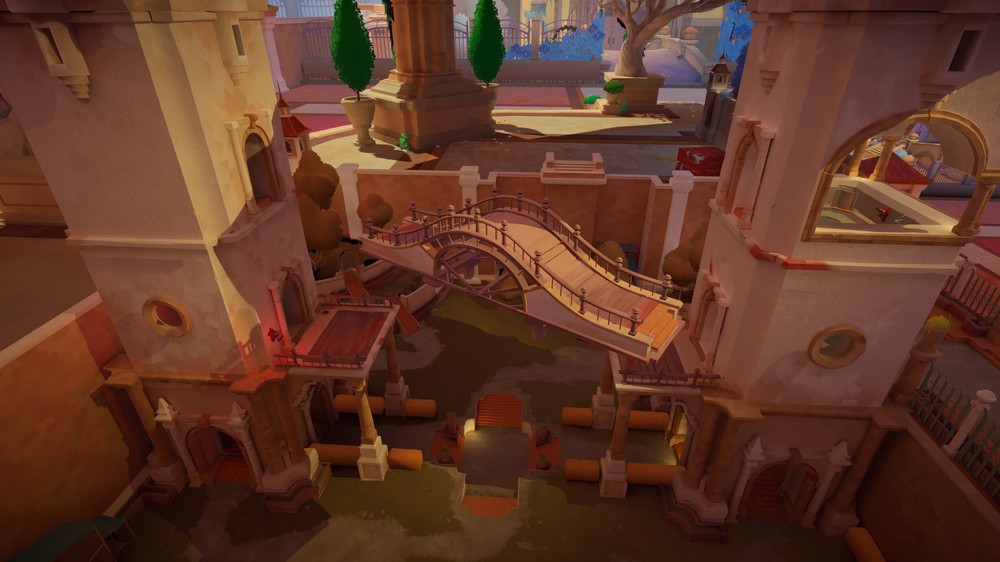 Gameplay can be a bit fussy at times.  Manipulating items can be problematic, as you try to rotate and zoom them in and out for proper placement and they frequently get hung up on the environment.  Your walking speed changes based on which version of the world you are exploring, so covering long distances in the smallest version is painfully slow and there is no run button.  Puzzles are surprisingly original and genuinely rewarding when you solve them.  There was only one puzzle in the entire game involving a portable staircase that sent me searching for a hint.  There were also two incidents where critical items vanished and I had to restart the chapter.

Maquette is $20 on Steam and FREE for PS Plus members during March.  As mentioned, you’ll get 3-4 hours of gameplay on your first pass depending on how good you are at figuring out these scale-related puzzles. There are also a series of speed run challenges if you are into that kind of thing.  You’ll need to do them if you want to Platinum the game, and unless you are doing these speed challenges there is no real reason to ever replay this game a second time. I was really hoping for some sort of decision point where I could repair the relationship, but that was not the story being told. 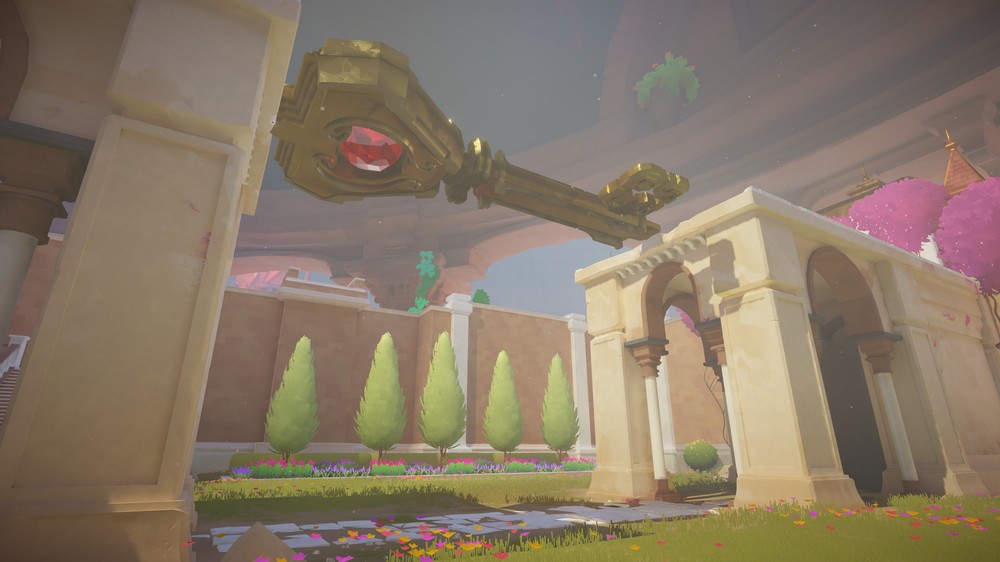 I enjoyed my time with Maquette despite recognizing all the callbacks to other adventure games like the Edith Finch story delivery and The Fisherman’s Tale item scaling.  What truly set the game apart for me was the fantastic voice acting loaded with emotional content and the marvelous soundtrack, both ambient music and at least four major songs with lyrics.  The visuals are also nice considering their low-poly construction and relatively simple textures.  I was reminded of The Witness.  Maquette desperately needs to be released for VR; it is perfectly suited to the visual design and the interaction of items within the world.

At the end of the day Maquette is just another interesting yet ultimately forgettable adventure game perfectly suited for the Steam library yet awkwardly out of place on the PlayStation.  I was surprised they even offered a PS5 version of the game since there are no obvious benefits or included feature support to set it apart from the PS4.  At least PS Plus gamers can check it out for free this month, because once they start charging for this game it will be a much tougher recommendation.