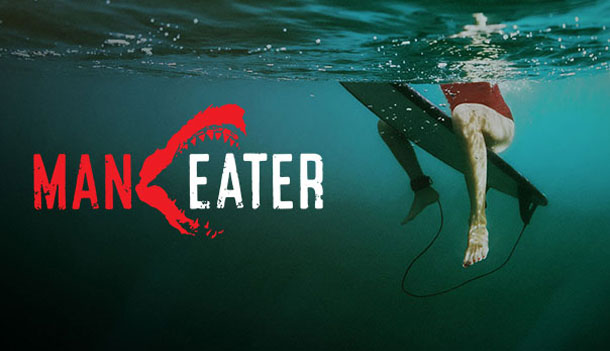 A mindless entertaining way to kill 30-40 hours and a few thousand people.

Not many games dare to let you play as the proverbial “bad guy”, but Maneater does just that with a flip-the-script story that will have you rooting for the fish and booing whenever humans show up.  The game wastes no time in setting up just how evil mankind truly is, both as mindless hunters and a threat to the planet.  After a brief tutorial you are immediately set upon by hunters led by Scaly Pete, a notorious fisherman who has his own reality TV show hosted by none other than Chris Parnell.  Chris will also provide hours of entertaining banter and narration while you play in hopes of balancing out the blood and carnage that dominates this game.  A twist at the end of the prologue reveals you haven’t been playing the main character at all, but rather the mother of a baby shark (do not start singing or I will stop this review right here) that plops out just as Pete kills the mom in a scene ripped right from the 1977 movie, Orca.

This sets up the next 30-40 hours of what ultimately become a bit of a tedious grind as you check off a seemingly endless array of activity icons spread across a massive map of coastal Louisiana divided into distinct areas with unique themes and environments like a swamp, toxic waste zone, retirement community, boardwalk theme park, etc.  Regardless of the location, you are presented with dozens of activity markers that slowly reveal themselves the more you play the game.  Unlike many games that just show you everything, Maneater spoon feeds you its content one undiscovered (?) at a time. 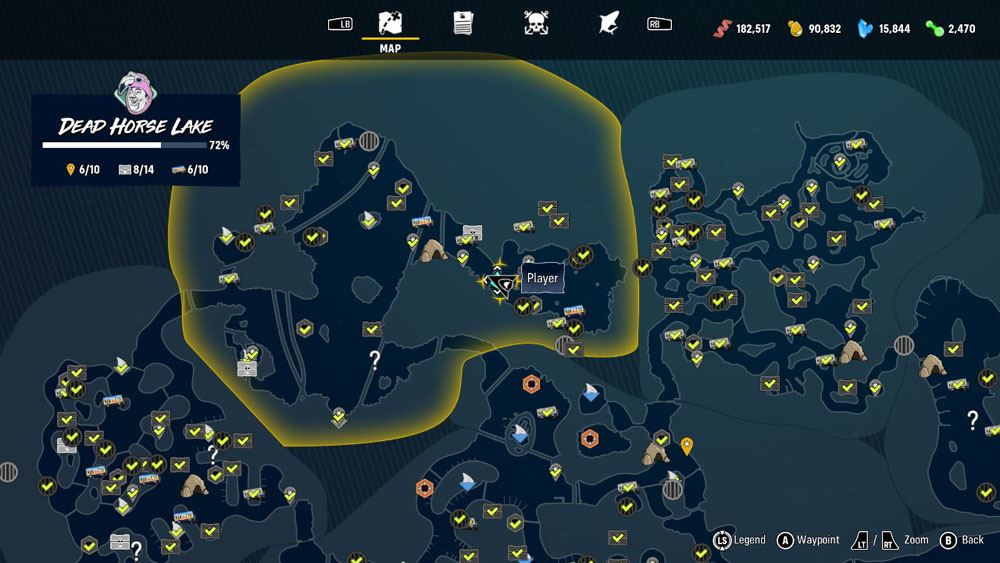 These activities/collectibles include; eating license plates (a nod to the original Jaws), discovering landmarks complete with mini-cutscene and humorous narration by Parnell, hunting for chests full of mutagens used to power-up, and lots of hunting/eating missions that culminate with a unique apex predator hunt for each region of the map.  Oh yeah, there are plenty of human attack missions where you get to eat dozens of innocent swimmers or anyone else who ventures to close to the shoreline.  One of Maneater’s more endearing charms is your ability to jump out of the water and flop around on dry land for a limited time (even longer after an upgrade) and eat anyone you can fit into your upgradeable jaws.  At first this is mostly swimmers and sunbathers but soon you will be snatching your next snack from a canoe, paddle boat, or Jet Ski.  Once you learn to “hold your breath” you can venture further onto dry land eating people on the boardwalk or from their very own backyards if their retirement home is too close to the water.  You can even flop into a golf course and occupy water hazards as you wait for passing golfers.  There is even a challenge mission to eat ten people from a crowd gathered on a putting green and another where you terrorize a senior mixer.

A threat meter slowly increases the more people you eat and eventually the shark hunters will arrive to eliminate the menace (that’s you), so you need to do this balancing act of attacking the hunters, trashing their boats with bites and tail-whips, or leaping onto their deck and munching away while avoiding taking damage by quickly evading their target locks.  Thankfully eating hunters (or any nearby fish) will replenish your health, but the more hunters you kill the higher your notoriety and even deadlier waves of fishermen will arrive with bigger guns and even dynamite. 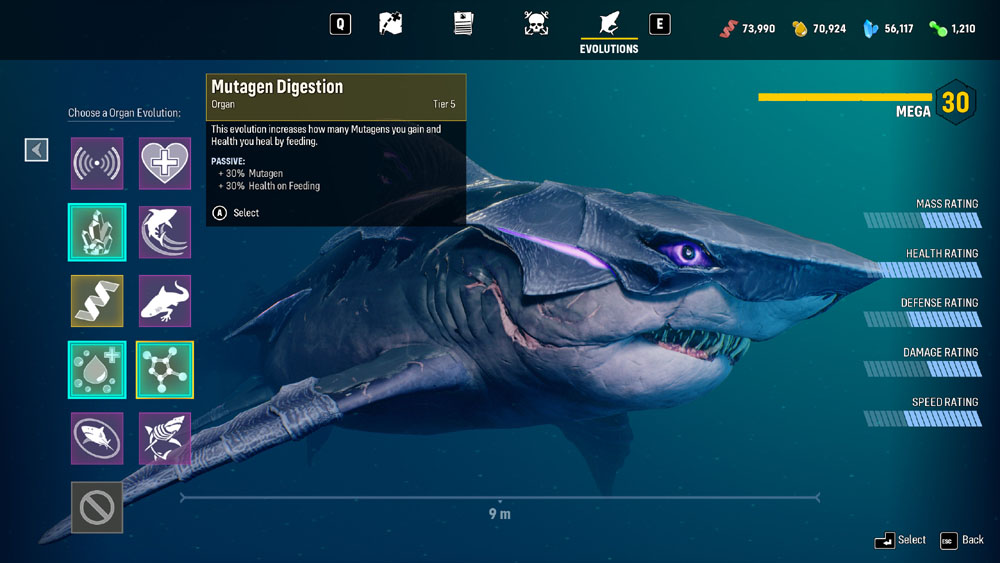 As mentioned earlier, you start the game as a baby and as you complete objectives you earn XP and level-up which fuels into the whole ShaRkPG aspect of the game.  You have a small but manageable skill tree that slowly unlocks upgrade sockets and by using the mutagens you collect from the hidden chests along with DNA consumed by eating various predators you can start to unlock impressive abilities attached to your body, teeth, fins, and several passive perks like sonar.  There are matching sets of upgrades like the bone set that turns you into this terrifying, armor-plated, prehistoric looking monster able to smash boats with a few attacks.  Some upgrades work better in certain regions, so managing these perks based on your location is a cool underlying tactic to the gameplay.

There is a nice level of progressive difficulty with enemies that are just slightly ahead of you in level like eels, gators, marlins, other sharks, and even whales.  Using a mix of biting and tail whips to stun combined with various upgrade perks, much of the combat is more button-mashing that tactical.  The lack of a proper lock-on camera makes things more difficult than need be.  You can snap the camera to target but it won’t stay locked.  I was annoyed that low-level enemies would attack when I returned to earlier levels.  Why is a level 2 eel attacking my level 22 shark?  There should be a point where lower level predators turn into prey. 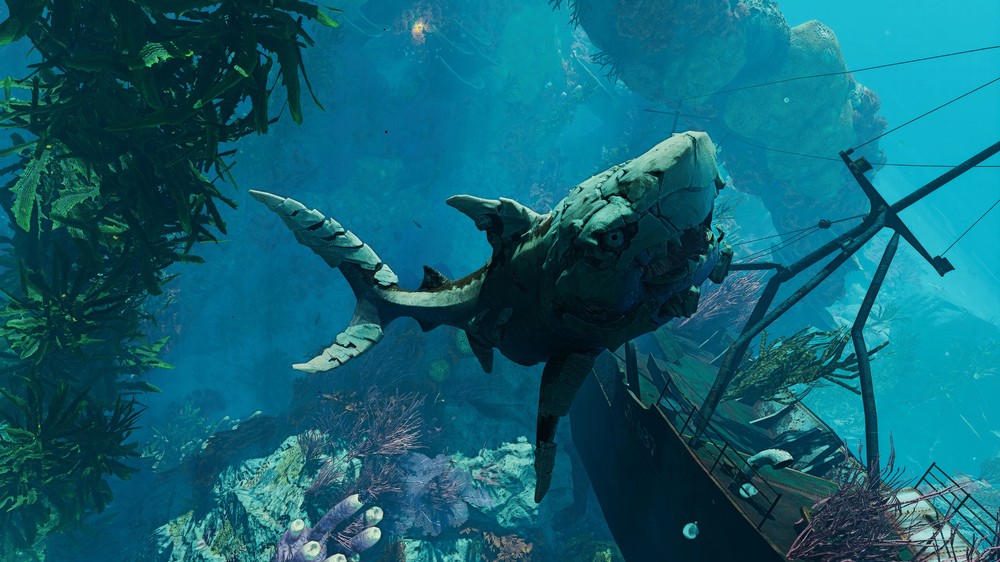 I reviewed Maneater on both the PC and the PS5 and the experience is mostly the same in both gameplay and technical presentation.  I had some performance issues on the PC with the game hitching when making long trips across the map and even when transitioning between swimming on the surface and submerging.  Sometimes the stutter would be 1-2 seconds.  I’m convinced this is an asset loading issue.  On the PC I moved the game from my mechanical drive to my SSD and nothing got better and then I started playing on the PS5 with their fancy new super-fast drive and the problem persisted.  I can only assume this game is poorly optimized on both platforms.  Despite the PS5’s fast storage there are still lengthy load screens starting the game and going between gameplay and pre-rendered cutscenes.  It’s more annoying than anything else, and in the 20-hours spent on the PS5 I only had one game-breaking glitch where the Barracuda apex predator intro movie locked up as I began that fight.

As for presentation, I was playing on an RTX2080ti when I started my PC review and finished on an RTX3080.  There was no difference between these two cards, and both ran the game fully maxed out at 4K at 60fps.  Both had the same hiccups while swimming long distances or diving and surfacing, which eliminated the GPU as the culprit, especially when the PS5 did the same thing.  Given the art style and asset design both console and PC versions look and perform identical but the PS5 did have slightly better lighting and HDR support.  Both versions support ray-traced lighting for water reflections. 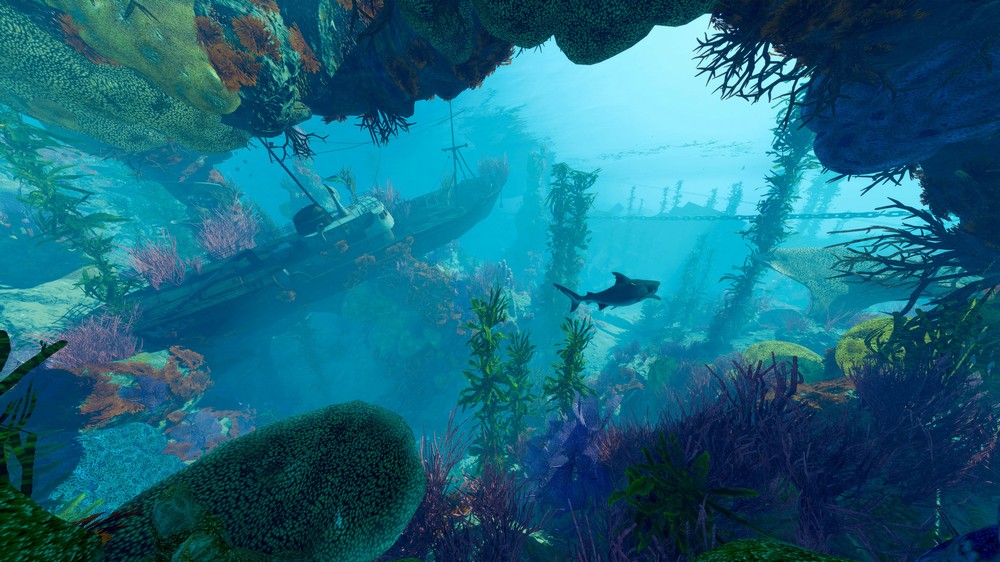 The DualSense controller uses the haptic motors for a bit of additional feedback and immersion that you won’t experience on the PC using and Xbox controller, but there is no use of the speaker.  The surround sound mix for both formats is outstanding with a great mix of ambient environmental sounds, real-world effects like boat motors and a great variety of screaming and crying from dying people and those watching them die as well as the comments from the hunters.  Parnell is on point with all of his narration that includes a lot of smart humor and references.  Even the background music is nicely composed and smartly integrated into the gameplay.

Maneater is a mindless way to kill 30-40 hours.  It has all the epic map-clearing you’d find in an Assassin’s Creed game or any other open-world sandbox.  Much of the content is literally gated behind metal grates that you can only open at certain stages of your growth, so you will need to return to previous areas as an Adult or Elder to access those areas and the treasures they contain.  Other collectibles require upgrades to jump higher or stay on dry land longer, so there is a bit of backtracking; thankfully you can fast-travel between each region’s grotto (your home base) to speed things up.  Fast-travel is also a great way to escape underwater caves when you get hopelessly lost. 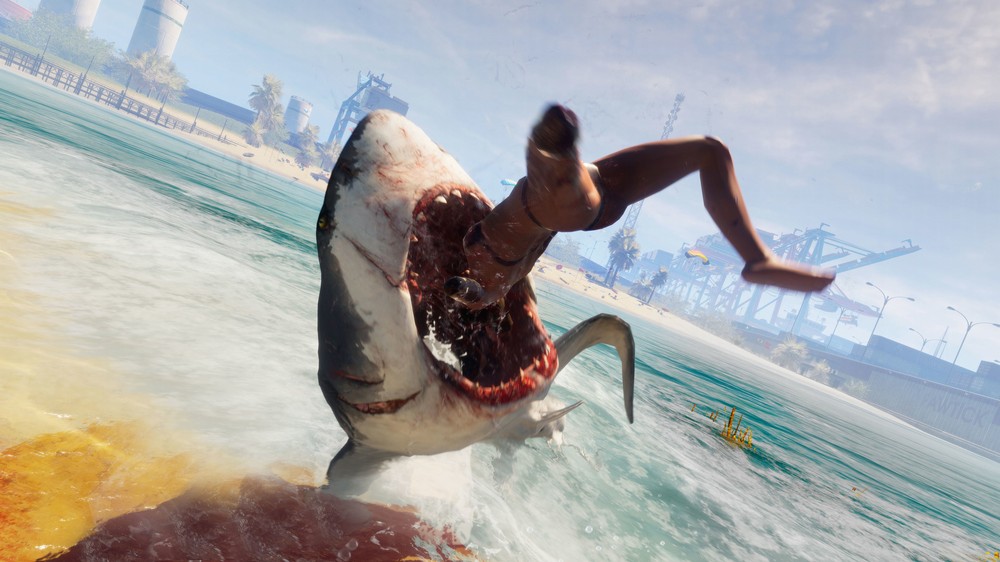 Admit it…we all root for the shark in movies like Jaws and Deep Blue Sea and now we finally have a game that lets us live out our fantasies of stalking helpless people, ripping them into bloody pieces and eating them with all the sickening crunching sound effects.  I was humming the Jaws theme the first few times I was swimming toward the surface near the beach with dozens of kicking legs deciding who would be first.  I bit down and leaped from the water thrashing side to side as arms and legs went flying in difference directions and the red splotch of blood expanded its circle.  Moving on to the swan paddle boat I jumped and grabbed a guy from the seat and ate him before I hit the water, listening to his companion screaming and pointing from the adjoining seat.  She would join him soon.

Maneater is currently on PC on the Epic Game Store and coming to Steam in the future.  The PS5 version is just as good in my opinion, and if you already own the PS4 version you can upgrade for free – your save files won’t transfer so you will need to start over.  I had a great time with Maneater despite its ultimate lack of variety and formulaic approach to gameplay with an exhausting amount of content that can often turn into a grindy checklist.   The RPG elements give the player some agency over how to evolve the shark and actually play the game.  The designers wisely gate content and upgrade paths to keep you motivated until the end, and the terrified screams of human prey are always a great incentive to keep playing if you are as twisted as me.  And remember, when Scaly Pete brings out the bigger boat you can always bring out the bigger fish. 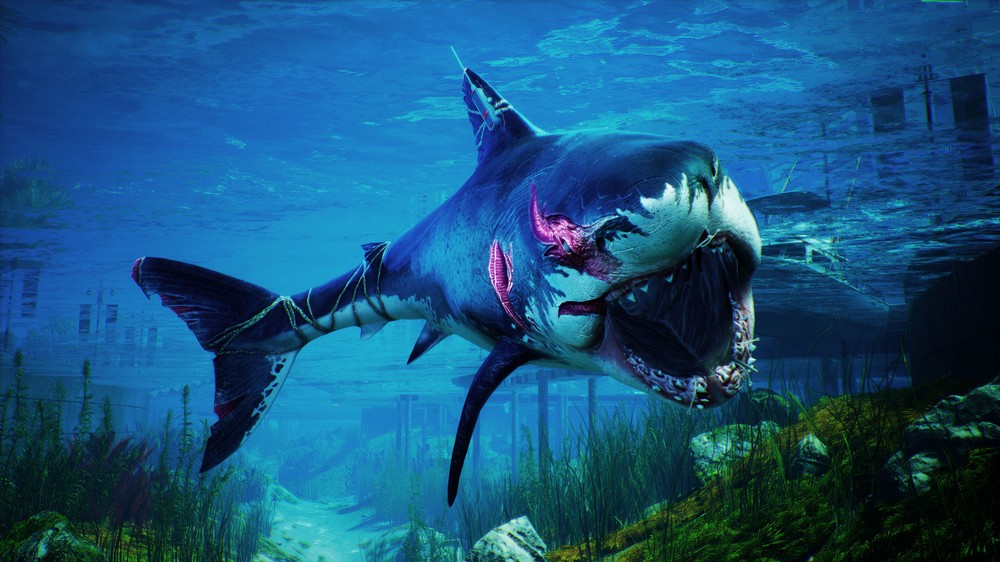 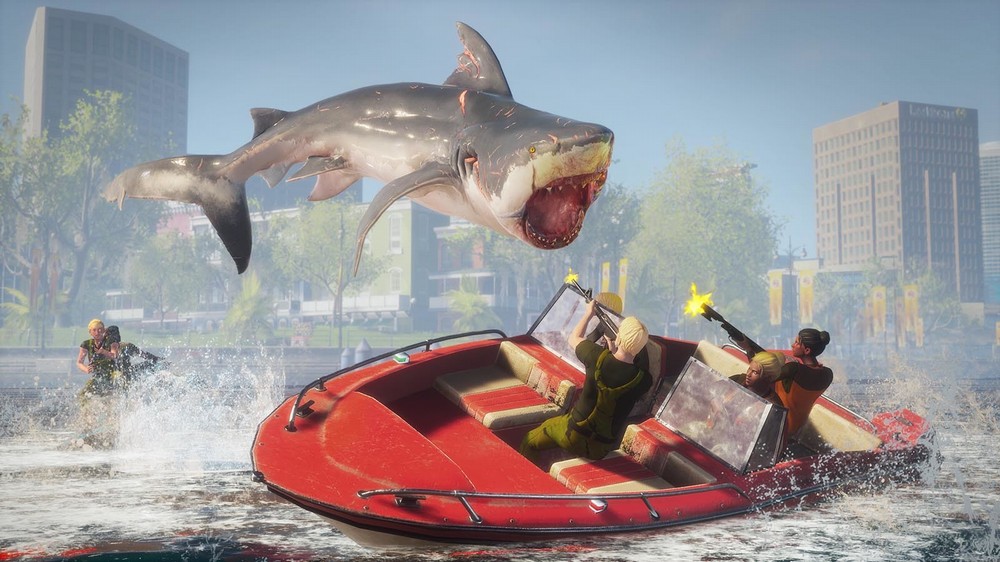 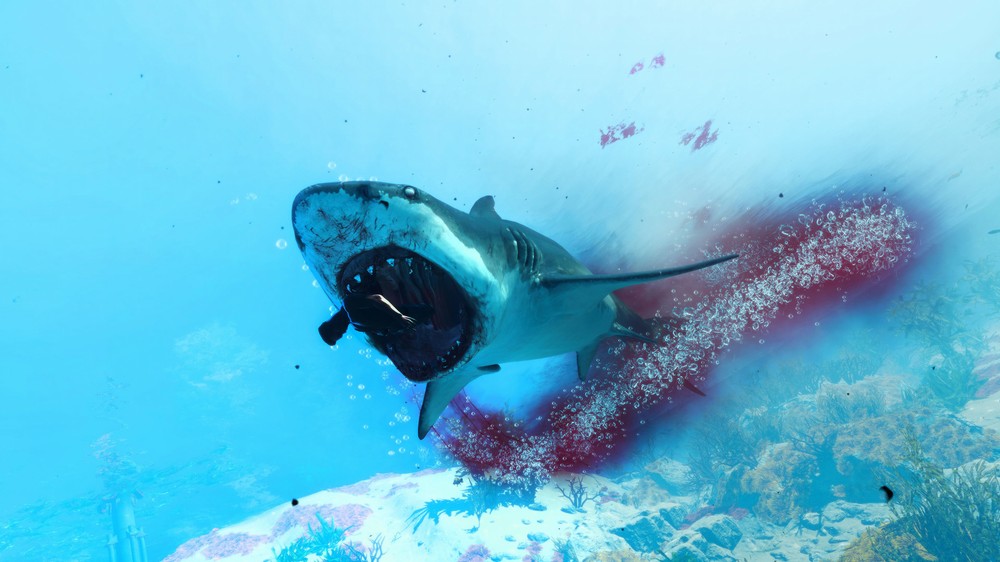 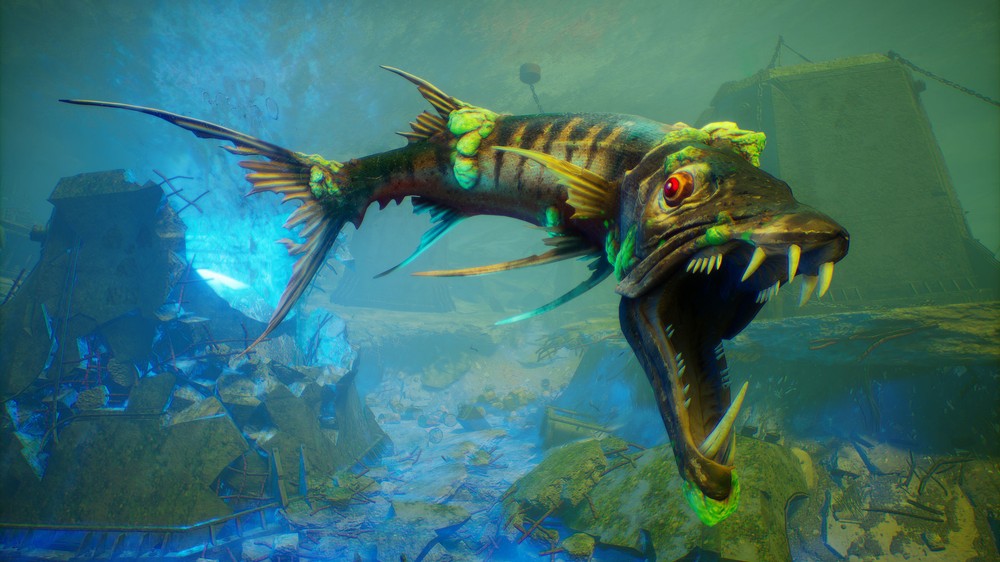 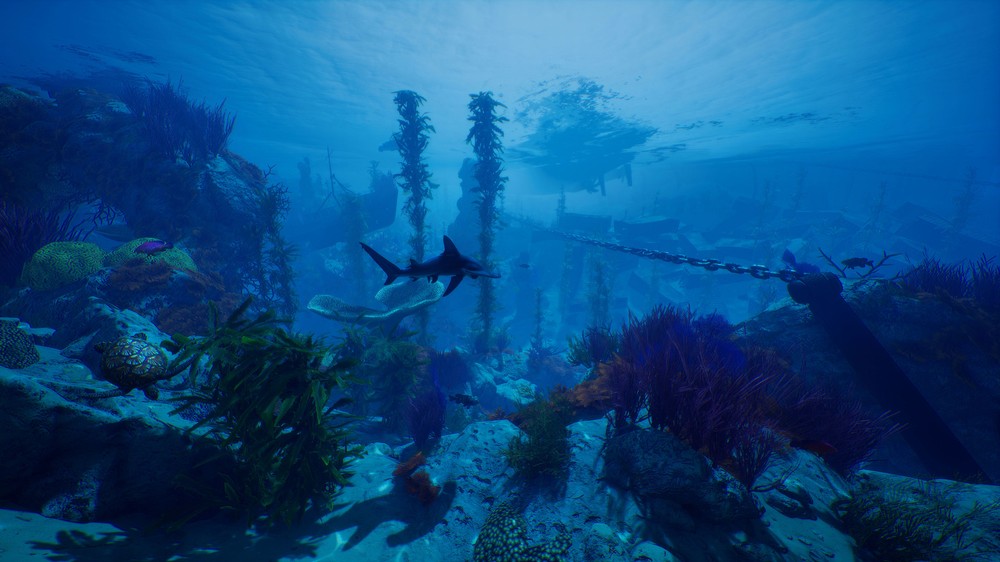 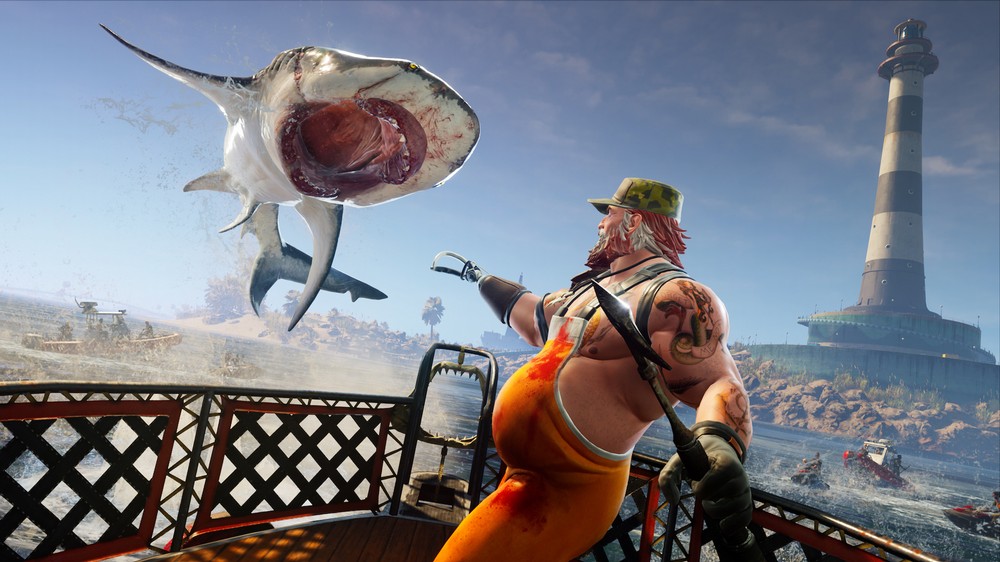