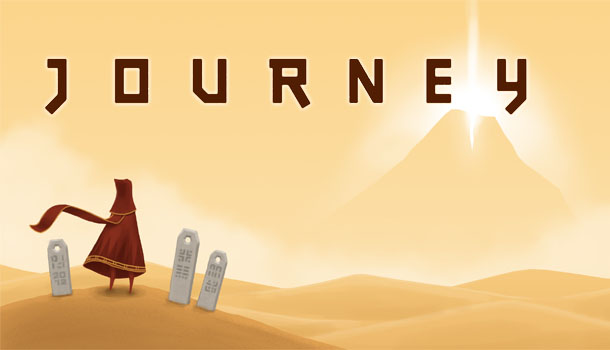 The perfect balance of adventure, discovery, joy and wonder.

Just over eight years ago PlayStation 3 owners were treated to one of the most magical games of that generation, and that game is still going strong even today.  Journey has made the trip across generations and even found a home on portable gaming using the PS Vita’s remote play option.  Last year Journey final arrived on PC on the Epic Game Store and the game finds its final destination on Steam this year.

For a game that I have played numerous times I am continually amazed how each new adventure reinvigorates my sense of imagination and wonder.  It’s a game so immersive yet so elusive that once complete I struggle to remember what just took place, much like waking up from an amazing dream and trying to piece it all together.  Even as I embarked on what must have been my eighth trip across the desert dunes in just as many years I found myself forgetting the basic concepts of the game’s simple yet eloquent design, but like most favorite memories it all came flooding back with a fresh sense of wonder and awe thanks to the stirring soundtrack and fantastic upgraded graphics for the PC. 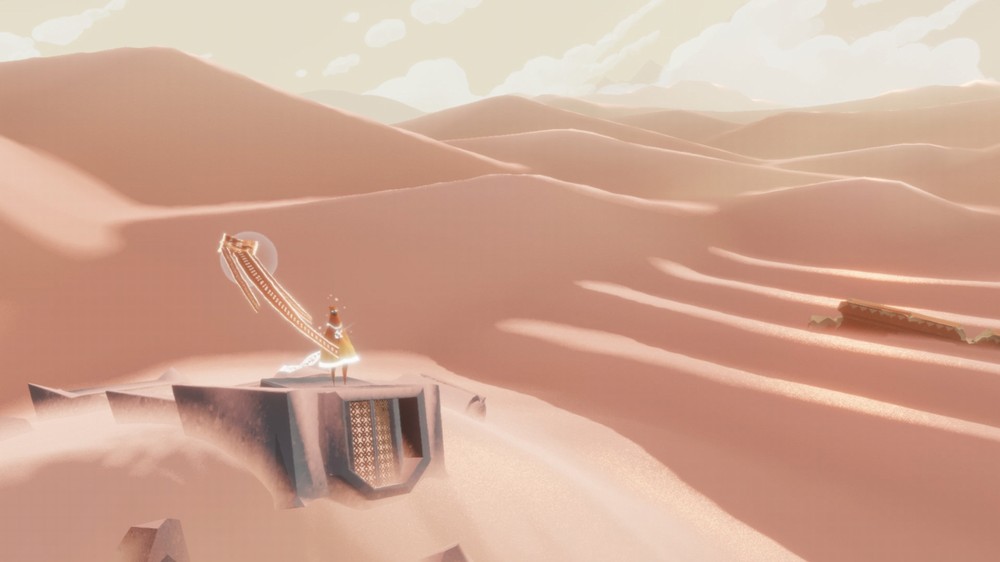 Journey is exactly that; a journey of exploration and self-discovery, open to the interpretation of the player and anyone else who happens to be in the room sharing the experience. Trying to explain this game is much like giving away the meaning of life, or perhaps in this case…the afterlife. Your personal experience begins with a lone androgynous robed figure rising from the sand at the base of a dune.  Ghostly prompts provide minimal hints for movement, jumping/flying and chirping/pulsing with the face buttons. As you crest the first dune you see a massive orange desert stretching out before you leading to the hazy horizon with a giant mountain rising up to the clouds complete with a glowing split peak.

There are no rules, no instructions and no real objectives in Journey, at least not by conventional gameplay standards. You are free to explore the rising and falling dunes, slipping up hills and surfing down others and venturing inside any stone ruins you encounter. If you stray too far off course a harsh wind will send you tumbling back into the main area. Almost immediately you will acquire a scarf that is able to absorb bits of magical fabric and is used to allow you to jump and eventually fly. You will also encounter these glowing symbols that will increase the size of your scarf allowing for greater jumps and extended flights. 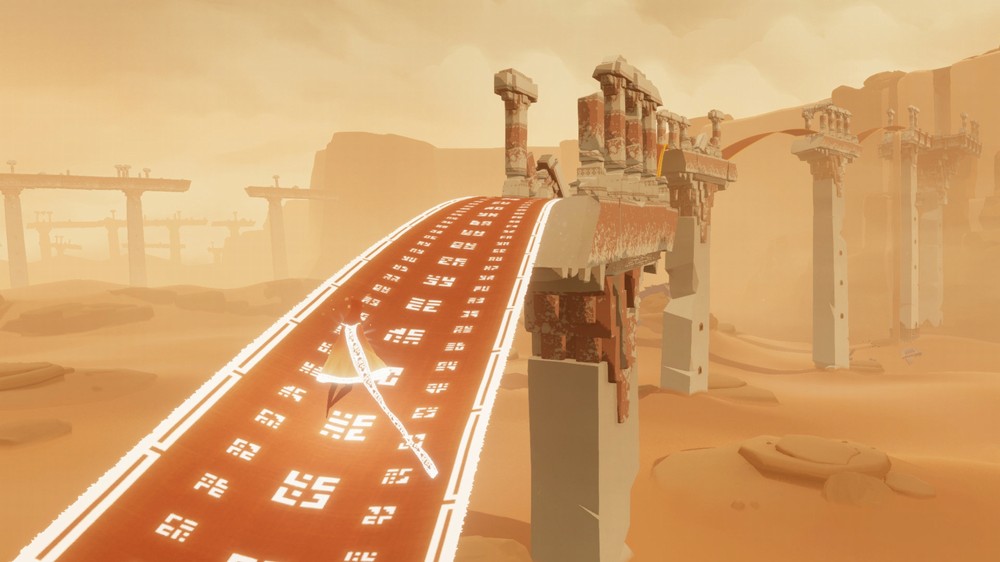 While there is no score in Journey, the size of one’s scarf clearly indicates your progress in the game, although until you meet your first anonymous companion you have no real way of judging your success. There is no traditional online co-op but the game is “online aware” so Journey will occasional pair you up with another random player who is also in your immediate area. You won’t know their name and you can’t chat other than to emit these pulsing chirps, almost like a sonar beacon. And while nothing really requires the presence of two people, Journey is somehow more magical when shared…even with a stranger. Players who stick next to each can energize each other’s scarf, or even exchange body heat in the colder levels. Players can solve level-changing puzzles and since there is no real score, you won’t miss out by not doing something yourself, and anything critical like those scarf-extending symbols will stick around for everyone to get.  The PC community for this game is surprisingly active and generous with countless people playing and replaying the game over and over just to help and encourage newcomers, helping them find secrets and earning some of the more challenging co-op achievements.

Puzzles are more about discovery. Often you will find these stone statues that flank a blank section of the wall. If you emit your pulse a hieroglyphic will materialize hinting at a bit of the story. At the end of each area you will light up similar stone statues before kneeling next to an altar to meditate and open the exit into the next chapter. Between chapters you’ll be treated to a mysterious un-voiced cutscene with more cryptic drawings and when the game is over those drawings come together to create a visual representation of your entire “journey” in a rather emotional reveal. 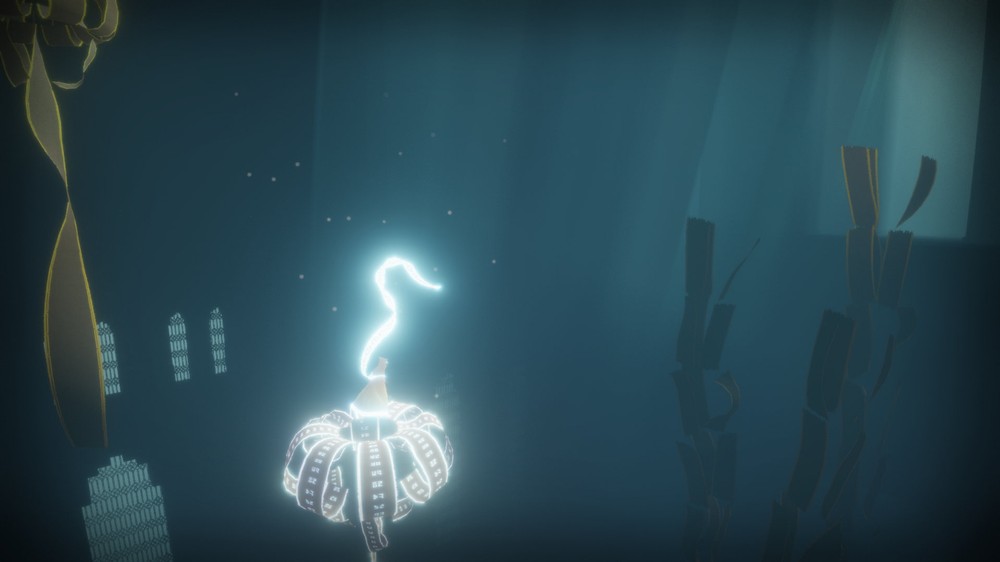 There is no real combat in Journey but that’s not to say there is no danger. Later in the game you will encounter these huge flying creatures that look like oriental dragon skeletons. They emit their own search beam and if you are caught in their line of sight they will zap you, seriously reducing the size of your scarf. It’s easy enough to avoid one of these creatures, but when they start showing up in pairs you have to get sneaky to make it through undetected and unscathed.

The presentation for Journey is simple elegance. The graphics are outstanding despite their simple nature and monochromatic themes. Each area picks a palette and exploits every possible shade of yellow, orange, red, blue, or purple in that area, keeping each chapter distinct yet uniquely linked. There is haze on the horizon but only for effect as the 60fps framerate is flawlessly smooth. The physics of you trudging through powdery sand or surfing down dunes with real-time deformation rivals anything you can see even by today’s standards.  The game scales nicely to your PC with powerful rigs able to play at 4K resolutions and ultra settings for incredible detail and draw distances.   Journey has never looked or played better. 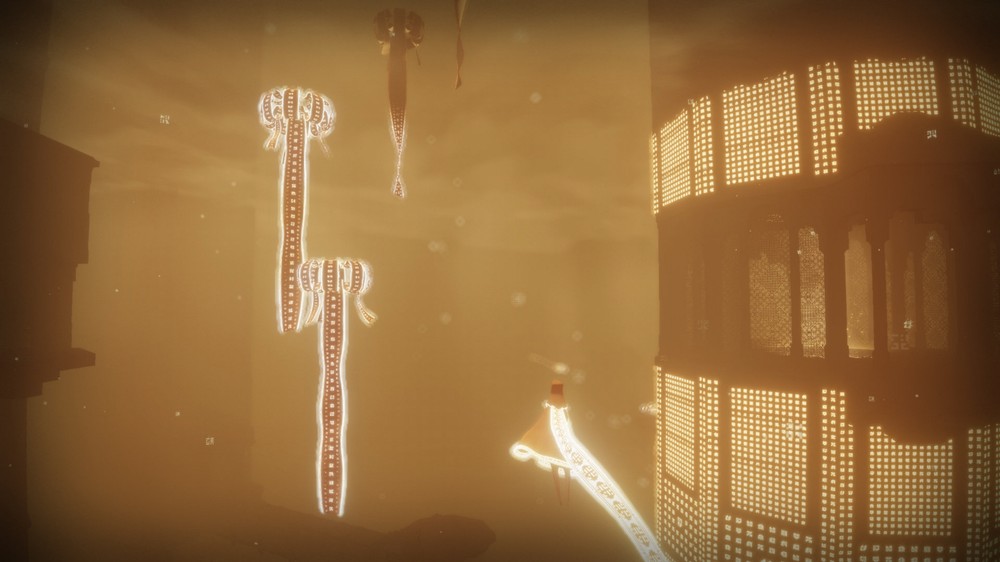 All of these amazing visuals are accented by an enchanting and mystical soundtrack that blends the pure environmental sounds of wind, the hollow echoes of ancient temples, the chirping “whale song” of flying fabric manta rays that answer back your own musical chimes, or the chirping banter of two strangers who meet between the dunes. The score is a blend of magical discovery, the occasional themes of danger or mystery, but most of all, a fantastical wonderment of the unknown. The final theme as you begin your heavenly ascension is still some of the best music I’ve heard in any game to date.

So what is Journey really about?  My interpretation is that the game represents one’s journey from the moment of death to your ascension to heaven. You start in what is obviously a graveyard, clothed in what looks like a burial shroud, and your goal is to go “into the light”. And when you do finally make it to the end…well, no spoilers here but let’s just say the final moments of this game are quite “heavenly”. 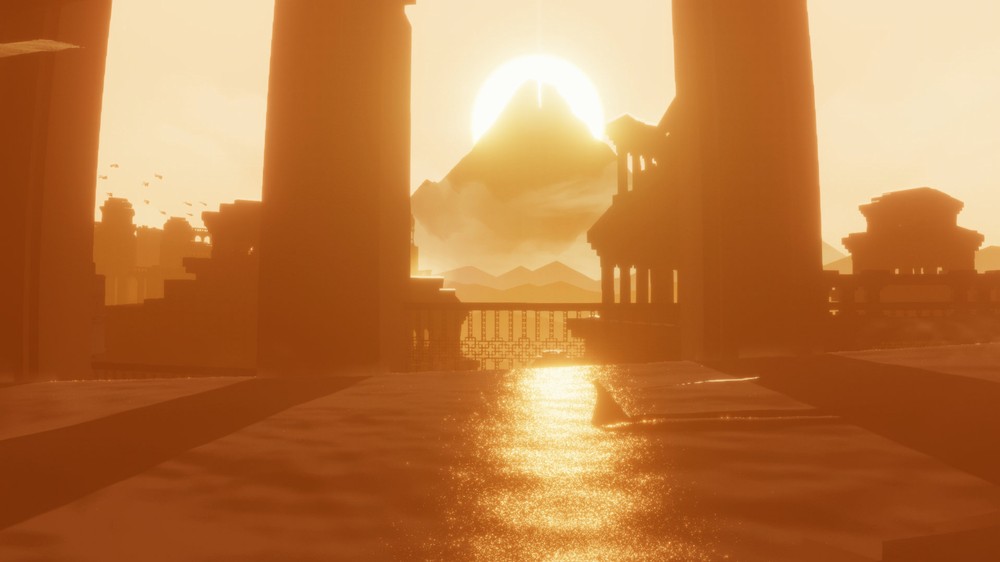 Journey is quite short, clocking in at 2-4 hours, which makes it perfect for playing over and over whenever the mood strikes. I’m guessing it will take at least 3-4 trips through the desert to earn all the achievements in this game, especially the co-op objectives.  One nice feature is that all the people you encountered during your travels will have their profile names displayed in the closing credits, so you can go look them up, send them a friend request, and chat about your journey if you want, even if you don’t know which person they were or where they appeared in your game.

Journey transcends conventional gaming and becomes more of an interactive experience designed to evoke (not force) emotional responses through subtle imagery, sublime music, and the perfect balance of adventure and discovery. It is easily one of the best games I’ve played in my 40 years of gaming; a timeless classic that you’ll play again and again.  Download it now and prepare to embark on your own journey of self-discovery. Who knows…that cloaked figure chirping at you might just be me.