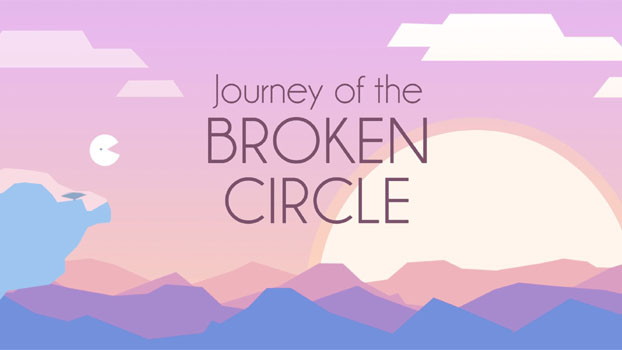 - Some grammatical errors in text

Enjoyable platforming mixed with a deep and emotional narrative.

On the surface, Journey of the Broken Circle seems the kind of Flash game that I would have played back when browser-based games were in their heyday. A relatively simple looking platformer with minimal inputs and no voice-acting implies a shallow experience, but I have to say that I came away from my time with the game profoundly affected and reevaluating both some of my life choices and how I interact with the people around me. Journey of the Broken Circle comes from Danish developer Loveable Hat Cult and through the titular character you will deal with a variety of philosophical and neurological issues in an attempt to make yourself whole.

Journey of the Broken Circle starts off innocently enough: there’s a minimalist visual style mixed with a bouncy chiptune soundtrack and a relatively breezy task of rolling from the left of the screen to the right, bouncing slightly each time the missing part of your circle meets the ground. The Broken Circle looks a bit like Pac-Man, and initially the experience reminded me a lot of 2012’s Thomas Was Alone, largely due to the fact that there were a number of typically inanimate objects communicating with each other and questioning the meaning of their existence. While Journey of the Broken Circle is only a few hours long, it doesn’t really delve into the deeper stuff until the latter half of the experience, meaning that your first hour or so is fairly chipper and care-free. 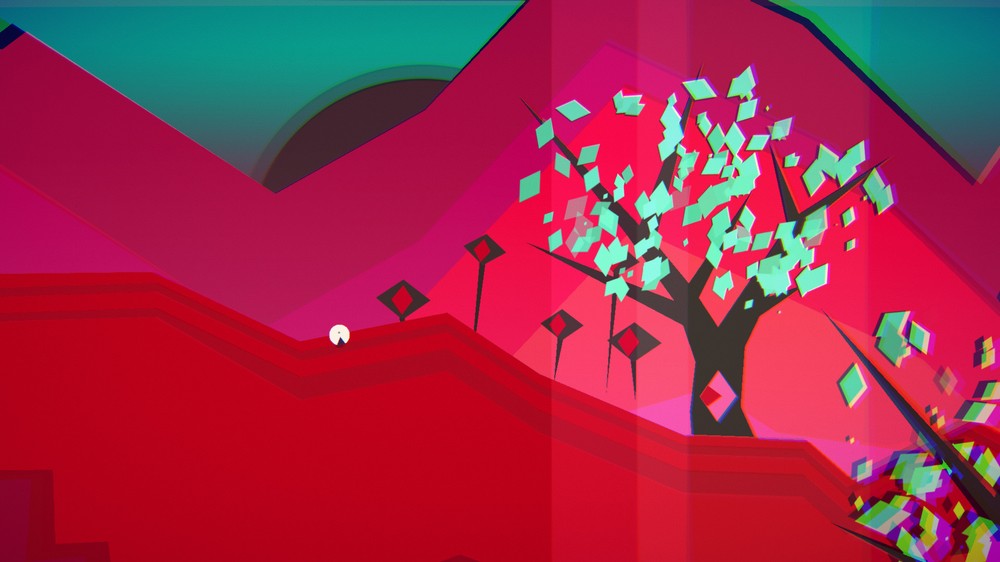 The first non-player character that you spend any substantial amount of time with is Sticky, who I think was a pinecone, but who joins with the Circle in an attempt to make them both complete. Prior to meeting Sticky, the gameplay of Journey of the Broken Circle consisted of rolling and jumping, but with this new addition the game now allows you to cling to walls and reach areas that would have previously been inaccessible. This is the first instance of Journey of the Broken Circle marrying narrative and gameplay, which is something that is done to great effect through the entirety of the experience. Circle and Sticky make a great team, but Sticky doesn’t quite fit into Circle’s gap, meaning that although they both gain something from the relationship the rolling still isn’t clean, and it’s clear that perhaps they’re not right for each other.

Eventually Sticky and Circle go their separate ways, and it is from here on that Journey of the Broken Circle starts to explore some truly interesting subject matter including loss, angst, inadequacy and trying to be something you’re not to impress others. These sections resonated with me to the extent that I actually had to take a step away from the game at one point just to process everything that was being shown to me. It wasn’t that Journey of the Broken Circle was too intense, but more the fact that it summarized some instances that I have personally experienced so well that I almost had to take a breather and come back once I had readjusted my mental outlook. Part of the reason why this works so well in-game is the fact that the actions that you’re performing with the characters match up with what they’re going through in the story, such as being required to literally support your companion while struggling to complete a puzzle yourself. 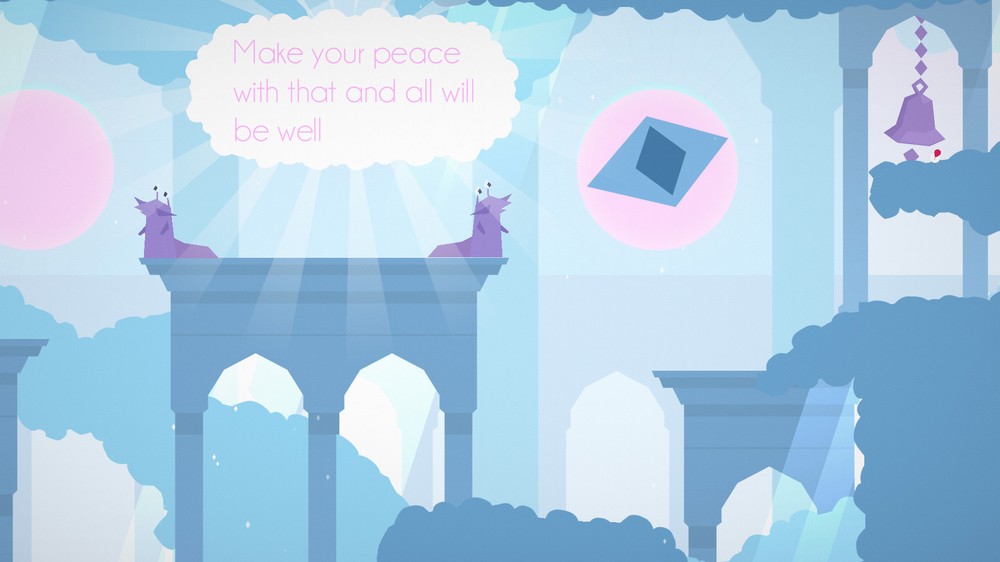 The other reason why Journey of the Broken Circle’s messaging works so well is the fact that it doesn’t bash you on the head with what it’s trying to say, and that it’s happy to let a segment unravel naturally rather than introducing it with a level of artifice. I was initially surprised when I realized where the story was going, but looking back on it with hindsight, it makes total sense based on what came before. Admittedly there were a couple of moments where I felt like the delivery could have been a little more even-handed, but these moments were incredibly minimal and didn’t detract from the experience all that much.

All this talk of narrative and themes ignore the fact that at its core, Journey of the Broken Circle is a solidly made platforming experience. There are some inventive sections scattered amongst the game’s levels and as you get towards the last third of the game, some puzzles present a genuine challenge that required multiple attempts to get past. While I was more than willing to persevere to get past these tricky parts I feel like this was more because of my investment in the story more than a strict enjoyment of the mechanics. Journey of the Broken Circle has some good ideas with regards to how it plays, but I feel that detached from the narrative I’m not sure how invested I would have been in how the game actually plays. 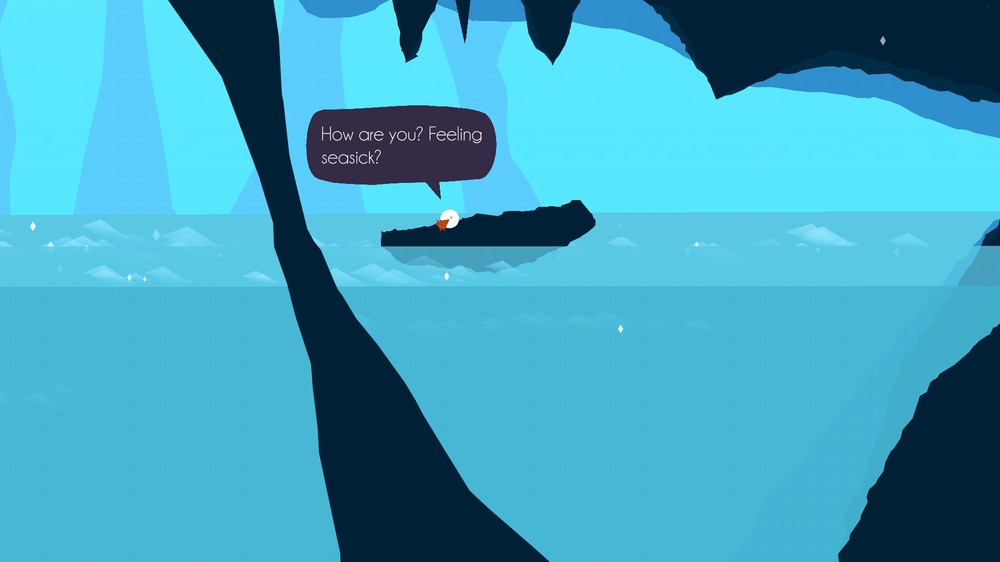 I sat down to play Journey of the Broken Circle expecting a fairly light-hearted romp through the trials and tribulations of being an incomplete shape, and instead came away with a philosophical unravelling of my relationships with those closest to me and how I deal with challenges in my life. This isn’t to say that everyone who plays Journey of the Broken Circle will come away with the same result, but this hit home for me on so many levels that I was taken aback. Journey of the Broken Circle is an excellent example of how to deal with delicate narrative themes in a videogame, and combined with an enjoyable platforming experience, this is an experience well worth exploring if you’re looking for a game that will get your brain firing.

1
1139
The Walking Dead: Saints & Sinners Review – Oculus Quest
2
984
Werewolf: The Apocalypse – Heart of the Forest launches on October the 13th
3
984
Synth Riders Celebrates Anniversary with a Month Full of Treats and an Oculus Ques...
4
984
Worm Jazz Review – PC
5
984
Join the Galaxy’s Finest as Star Wars™: Squadrons Soars Into Homes Today
6
984
The Falconeer First-Look Preview – PC
7
984
Metamorphosis is 33% Off on Steam!
8
983
Take to the Skies and Choose a Side in the New Trailer for Next Generation Air Com...
9
983
CRASH BANDICOOT 4: IT’S ABOUT TIME IS AVAILABLE NOW
10
983
Frictional Games Shows Off First Gameplay Footage of Amnesia: Rebirth
All Original Content on Game Chronicles is Copyright (c) 2002-2020
Sinjin Solves Walkthroughs Copyright (c) 1996-2020 by Mark Smith