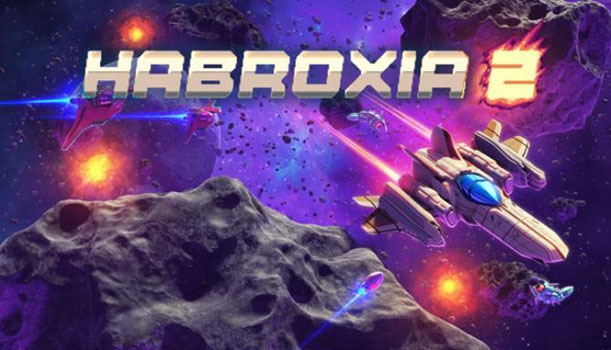 Another mindless space shooter with a charming retro design.

I’ve had a love/hate relationship with arcade space shooters since the early 80’s; long before the term “bullet-hell” was even a thing.  Over the years the games have gotten tougher and my skills and reflexes have lessened; thus the hate part of my relationship with the genre.  Habroxia 2 is a classic example of my situation; a game clearly inspired by shooters from the 80’s yet so blindingly difficult it took me over an hour to beat the first level.  I did discover that trying to play this game on an 85” screen did contribute to that difficulty, and once I switched over to a smaller monitor my situational awareness and overall ability to play the game was greatly improved.  So bigger isn’t always better…at least with some games.

As with all games in this genre there is no real need for a story – just let me shoot stuff – but Habroxia 2 does manage to bookend in a bit of narrative diversion around the pew…pew…pews.  You’ll be playing as Sabrina, a young starpilot on a mission to find her missing father.  Sadly, the story seems to fade away after the initial introduction and fails to fuel future mission objectives or instill any sense of investment, which all circles back to my claim that these types of games don’t need stories.  Prepare for some frantic combat as you explore this non-linear arcade shooter with fully customizable weapons, 64 ship upgrades, and some innovative gameplay mechanics.  In additional to a substantial campaign mode you also have New Game+ with even harder enemies along with a Boost Rush mode and a Boss Rush mode where you can face off against 22 insane bosses. 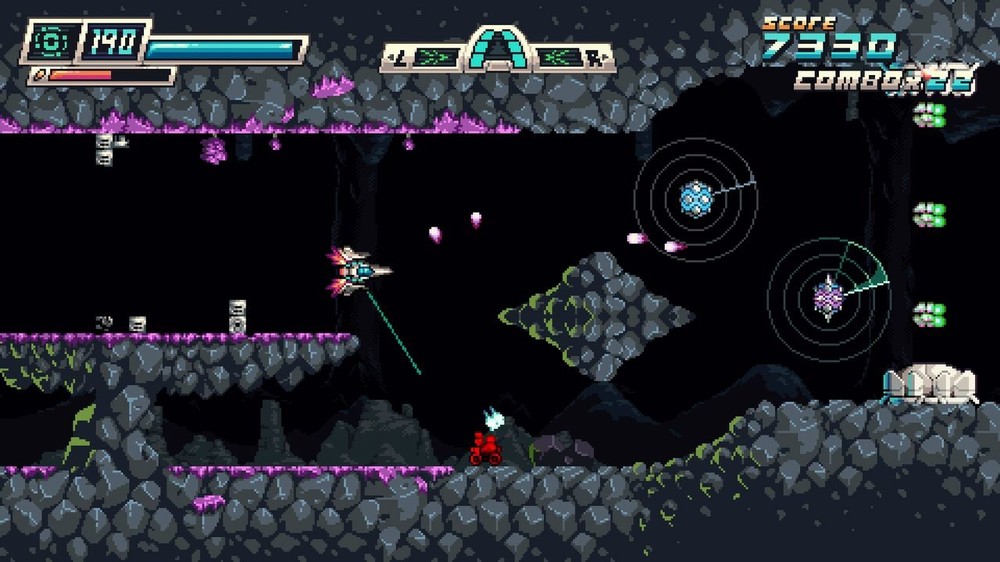 The first thing I noticed about Habroxia 2 was the unique weapons and the way they worked.   Normally these games rely on a primary weapon that fires forward and several secondary gadgets that clear the area with their own distinct fire patterns.  In this game your primary multi-directional weapon is controlled by the right stick, essentially giving you a twin-stick shooter integrated into a traditional forward-moving space shooter while your secondary weapons typically fire forward and behind with much more powerful effect but also with a short cooldown period between uses.  Ultimately, finding the perfect weapons setup is critical for beating certain levels, but weapons can also factor into a player’s personal playstyle.

There are some balancing issues with the game.  Habroxia 2 is oppressively difficult in the early levels and then later in the game the more powerful upgrades seem overly powerful where boss fights are over before they even begin.  Enemy placement and bullet patterns are totally scripted, allowing you to quickly memorize levels and strategies after a few failed attempts.  Level design is simplistic in design with repetitive use of textures that cause many stages to blur together, but I did appreciate they non-linear approach to gameplay where you can fly around this star map to choose your level or return to base.  Sadly, there are no difficulty settings, which means the game can be too hard for rookies and too easy for veterans. 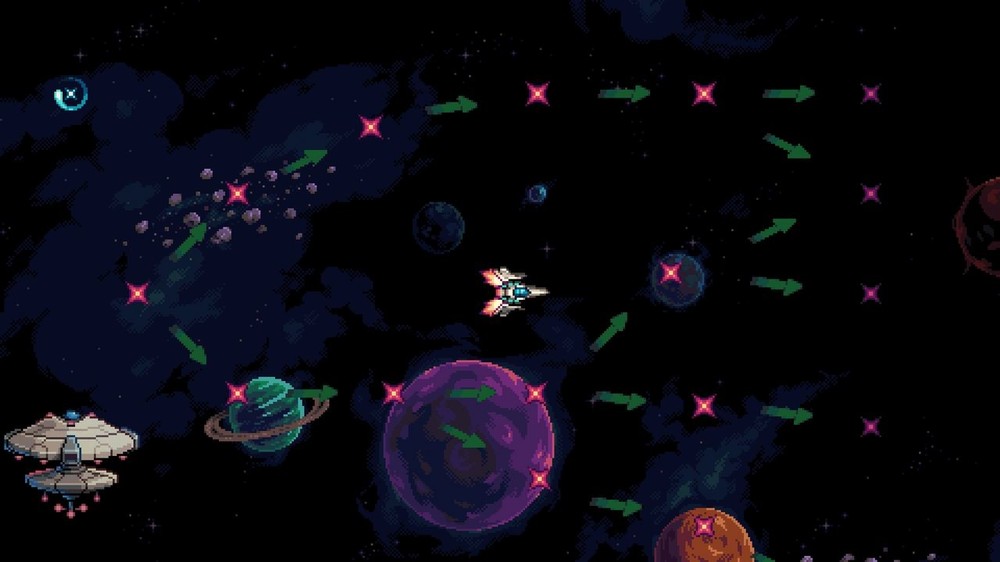 I did appreciate the responsive controls that allowed easy access to all my weapons along with precise movements within the confined levels while dodging crazy bullet patterns.  Habroxia 2 mixes up the gameplay by switching between horizontal and vertical scrolling stages, which keeps things fresh at least at a superficial level.  It was really fun to figure out the best configuration of weapons, mixing overall power with patterns and cooldown timers.  The retro design was charming at first, triggering many memories from my arcade days, but honestly, 40 years later I have become a bit of a graphics snob and prefer a more polished look for my games.  I did appreciate the authentic retro music that totally matched the energy of the gameplay.

Detractions from the game included repetitious enemy design, especially the bosses of which there are many.  If you dabble with the Boss Rush mode you’ll quickly see what I’m talking about.  Out of 20-some bosses only a few stood out as original or challenging, especially after you have upgraded weapons.  Much like having too many bosses, Habroxia 2 also suffers from having too many levels, which again leads to repetitious level design and grindy gameplay.  Traditionally, these games were short and sweet, designed to eat quarters at the arcade, but now designers seem compelled to artificially bloat their games to meet some arbitrary value proposition.  I’d rather have a short and tightly designed game that I would play over and over than a long drawn out experience I may never finish.  And my final complaint is the inability to customize the controls…come on, this is 2021.  I was able to make do with the default control scheme, but there were some commands I would have liked assigned to other buttons if given the chance. 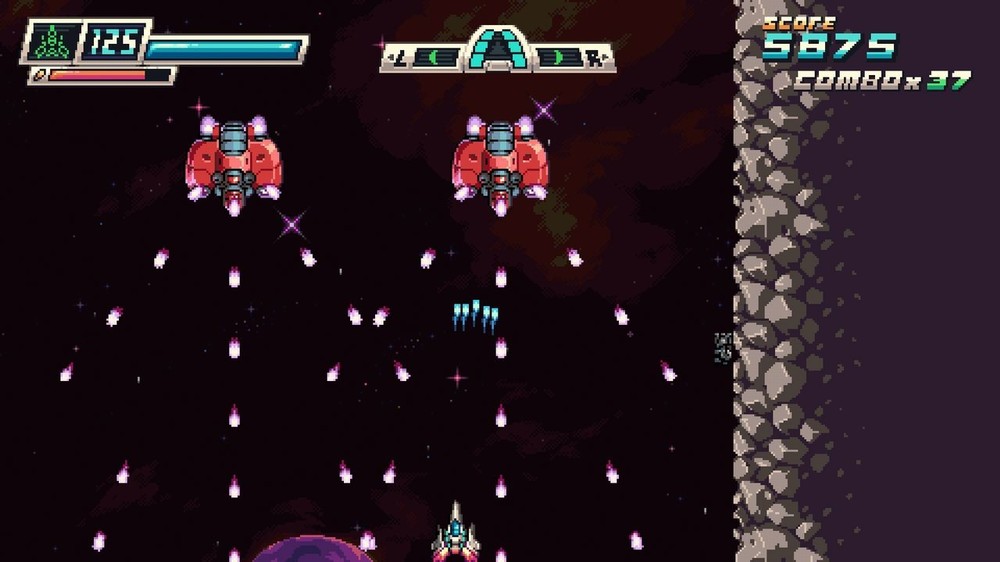 I had fun with Habroxia 2; more fun after I started playing on a smaller screen and was able to comprehend all the intense action taking place around me.  Much of the difficulty rests within the weapons and upgrade system, as the game never fluctuates from its mindlessly repetitive level design, enemy placement, and bullet patterns.   There is definitely some try-die-repeat gameplay here, but once you finally figure out that perfect combo of weapons and learn the levels like the back of your hand Habroxia 2 can become almost too easy near the end.  If you’re looking for another mindless space shooter with a charming retro design then give this a shot, but there are plenty of flashier and better constructed games out there just like this.