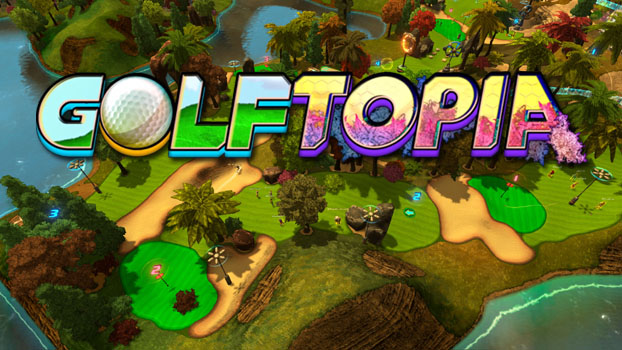 On the seventh day God created golf and with GolfTopia every day is Sunday.

On the seventh day God created golf and with GolfTopia every day is Sunday.

I have a love-hate relationship with construction sims dating all the way back to the original Sim City.  Games like RollerCoaster Tycoon, Theme Park Simulator, and Jurassic World Evolution have fueled my addiction to the genre over the years but nothing has come close to testing my ability to stop playing a game like GolfTopia.  My first experience with the game lasted a solid eight hours and I fear it will only get worse the more this game evolves throughout its Early Access period.

I don’t know what it is about these games with all their interlocking systems and rules.  I have never had any aspirations of becoming a manager of my own golf course yet here I am stressing out over refilling my vending machines, cleaning my bathrooms, and oh yeah…Mike just hit his ball into the water on hole six, freaked out, and is now assaulting other golfers on the practice green.  And don’t even get me started on the weed infestation that is invading the properties adjacent to mine forcing me to build a laser-shooting droid army on scale with the Phantom Menace. 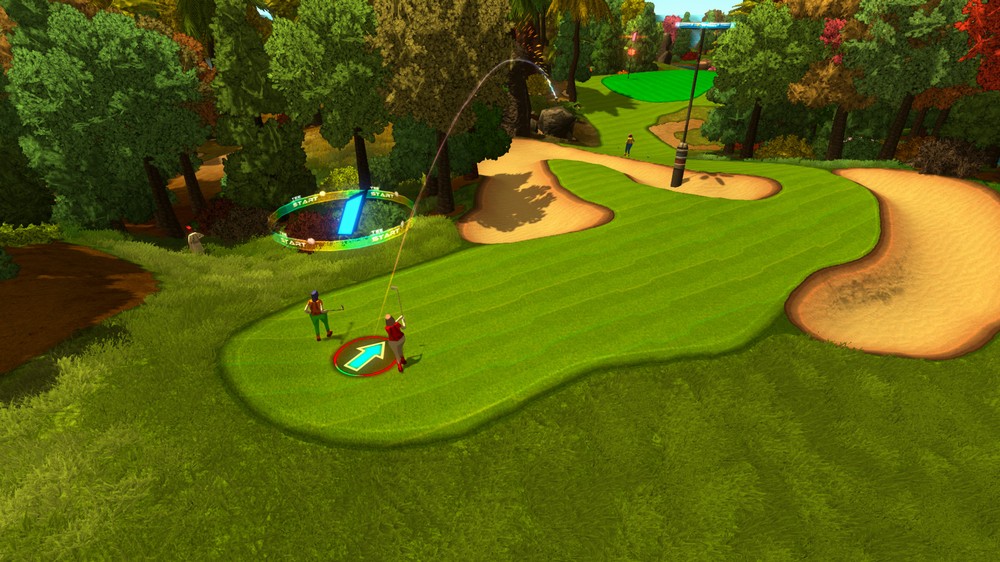 GolfTopia is pure genius and practically perfect even in this early stage of development.  During the week I had this game installed before I played it I noticed there were three updates, and after taking a look at the Steam discussions I can see why; the developer is super-active in the forums addressing player concerns and releasing updates and patches in near-real-time.  I’ve never seen anyone this engaged with his audience since Early Access began, and I can only imagine how great this game is going to be when it’s officially released.

So what is GolfTopia?  You basically start with a randomly generated piece of land, divided into plots.  You’ll start with one plot with which to build your clubhouse and your first three holes and expand your golf empire over the course of time and money.  You’ll be able to purchase connecting plots of land, and as your reputation grows you can upgrade your clubhouse; each upgrade allowing you to build more holes. 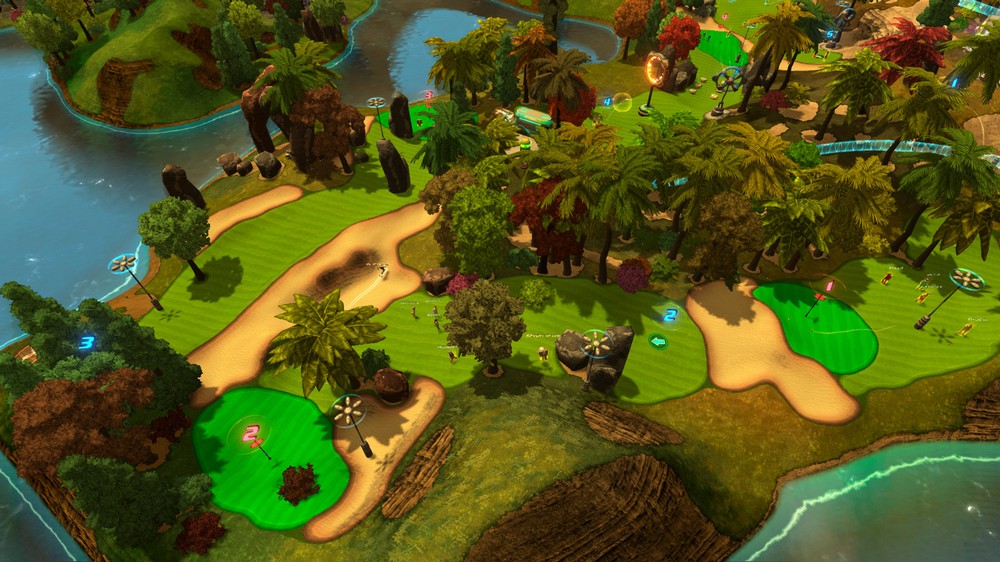 As crowds of golfers stream through your clubhouse doors each day you will need to keep them happy.  This means building challenging yet fun holes.  Laying out your dream course is surprisingly intuitive.  You place your tee and then the hole, reasonably spaced apart for par 3-6 scores then create all the trimmings that go with it.  Using terrain tools you can “paint” your fairway, sand traps, rough, etc.  With a swipe of the mouse you can shape your greens, curve your fairway through trees and using landscaping tools to raise and lower the terrain to create ponds, lakes, hills and mountains.  Once you have the basic layout you can enhance the holes with flowers, trees, rocks, and other decorative features to keep your golfers happy.  I was amazed at just how stunning the results could be with minimal effort, and the more you play and learn the nuances of what goes into a great course design the better the game gets.

As your layout grows in size and complexity you’ll need to address other needs of your golfers like food and beverages and a bathroom for after they consume them.  You’ll need to build paths to guide your golfers from the last green to the next tee and maybe toss in a few benches so they can sit and relax.  A bench at every tee box is a good way to avoid golfer fatigue and frustration on a congested hole.  Your golfers aren’t shy when it comes to letting you know their feelings.  Every golfer on the course is represented by a color-coded dot at the bottom of the screen and if those dots start to go from green and yellow to orange and red you have problems.  You can click on any dot to be instantly taken to that golfer where you can view an array of emotions.  Sometimes a golfer is just angry about a bad shot and there’s not much to do unless a lot of golfers are angry in that same location then you might have a design issue.  I had one fairway peninsula where balls were constantly rolling into the water, so I lined the edges with sand traps to stop the balls and things got better. 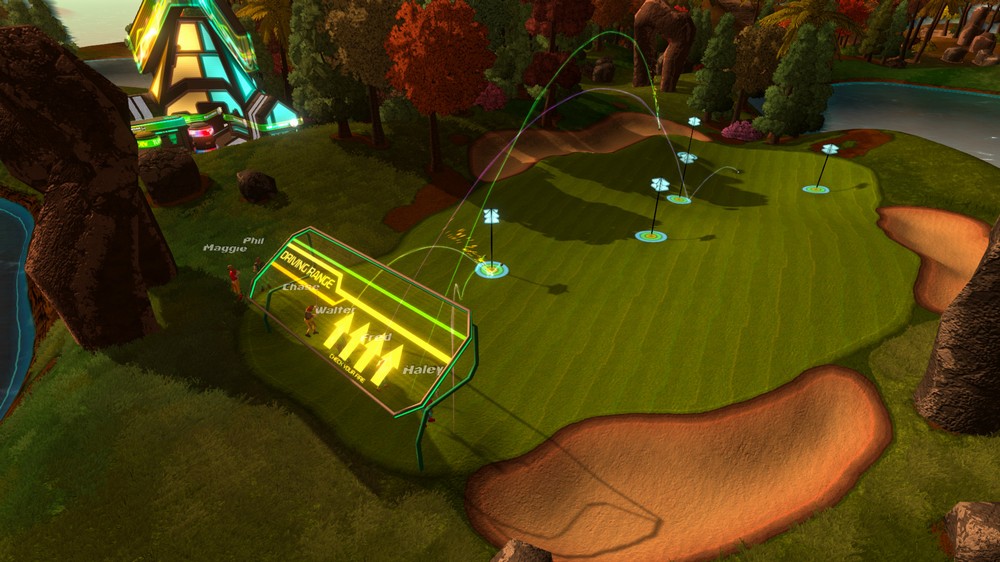 I built concession stands about every three holes to keep people happy, and when things got congested at the clubhouse on the first tee I built a practice green and a driving range to keep the crowd entertained.  Your country club is open 24-hours so you’ll also want to strategically place lights around the course.  Balls glow in the dark and recharge when under the light so you don’t need to overlap coverage; just make sure your tee boxes and greens are nicely lit as well as your concession areas.

Keeping your course open and functioning while constantly under construction or remodel can be challenging.  After building six holes I had to make a temporary return path back to the clubhouse but later when holes 7-9 were installed that path and several amenities were no longer needed.  The game does a nice job of alerting you when certain items are no longer being used.  On my first design my ninth hole ended very far from the clubhouse and after a few angry rants from the golfers I had to install my first transport tub.  This transport system, ripped straight from Futurama, instantly moves your golfer across long distances.  I was smart and rather sending them back to the clubhouse I had them dropped off at a nearby concession area so they would spend more money before taking the short walk back to the clubhouse. 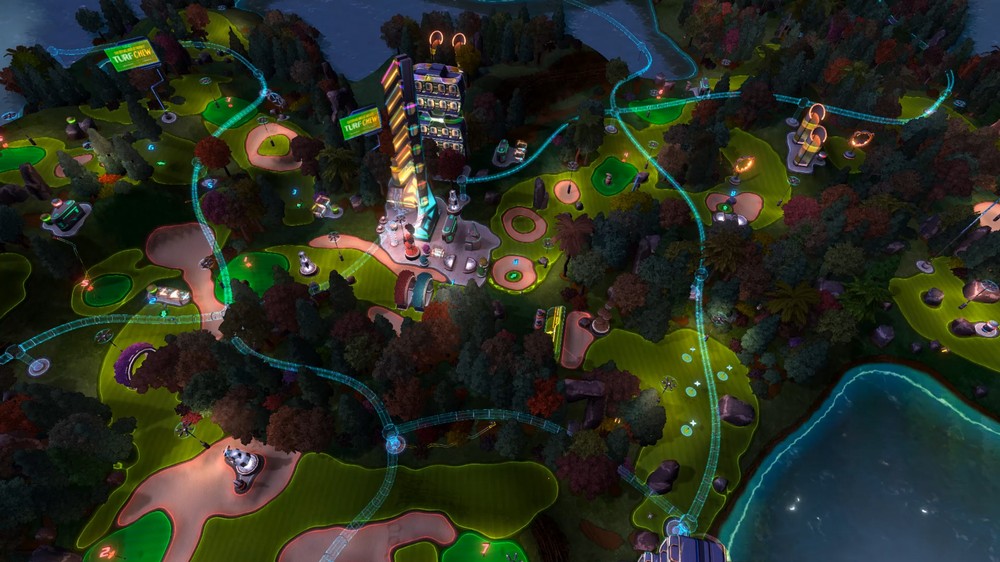 As your golfers’ happiness increases so does their membership levels, and clubhouse upgrades will require various levels of bronze, silver, gold, and platinum membership.  Angry golfers will often cancel their memberships while happy, challenged golfers will increase theirs.  Once you have your course built it’s all about the fine balancing act of keeping everyone happy and your course profitable.  Happy golfers equal profits while unhappy golfers like to complain and with each complaint a literal weed sprouts up somewhere on the course, sometimes on land you don’t even own yet.  These weeds will spread like a wildfire and if left unchecked will invade your active course, creating an eyesore that your golfers will complain about thus creating another weed.  At first you, the manager, and your starting pair of drone attendants can control these weeds but eventually you will need to strategically install anti-weed laser turrets to keep circular areas clear and larger canons to artillery strike anywhere on the course.

One cool way to eliminate pesky weeds is to nuke them from orbit.  You have all sorts of cool “orbital strikes” you can invoke from a separate menu granting a skill boost to a group of golfers or boosting happiness levels of another.  Since you get paid based on the happiness of a golfer every time they sink a putt it’s smart to use this boost around the greens.  You can even steal money from golfers’ wallets from orbit if you need some quick cash. 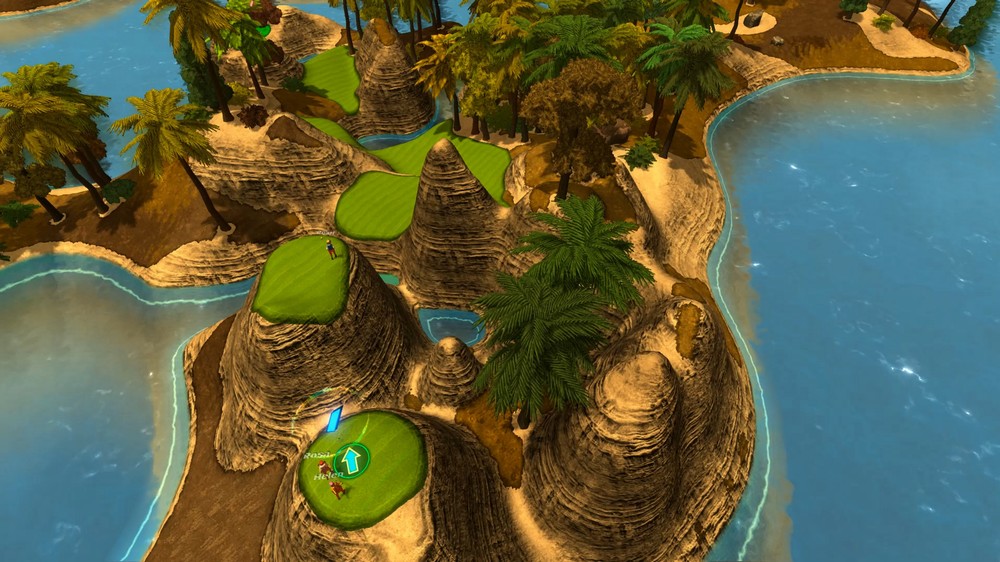 GolfTopia has a wonderful presentation with gorgeous graphics and super-detailed textures and models with quirky animated golfers and fun effects.  There is a beautiful day-night cycles with shifting colors for sunrise and sunset and shadows that slowly move against the sun.  You even have random rainfall which slows business and speeds up the weed growth.  Once you have things operating smoothly you can speed up time to earn that money even faster.  The UI and menus are nicely laid out and non-invasive and there are some great heat map overlays you can toggle to show trouble areas on the course.  The audio is fantastic with pleasing background music and fun sound effects to liven up the simulation.

I only have a few minor issues with the game as it stands.  You can’t really fight weeds on property you don’t own and in my game, by the time I purchased the infested land there were these super weed-hives floating offshore that took nearly a constant hour of building and battling to eliminate.  My other more serious issue was with the AI ignoring my concessions and bathrooms then complaining and cancelling their membership because they were hungry, thirsty, or needed to pee.  I literally tracked dozens of golfers on the green of my hole 8 who all had dangerously high levels for hunger/thirst/bladder then watched them walk by an oasis of refreshments only to rage-quit on hole 9.  I had to place trees and rocks to form a barricade to force them to use my facilities and even then some snuck by. 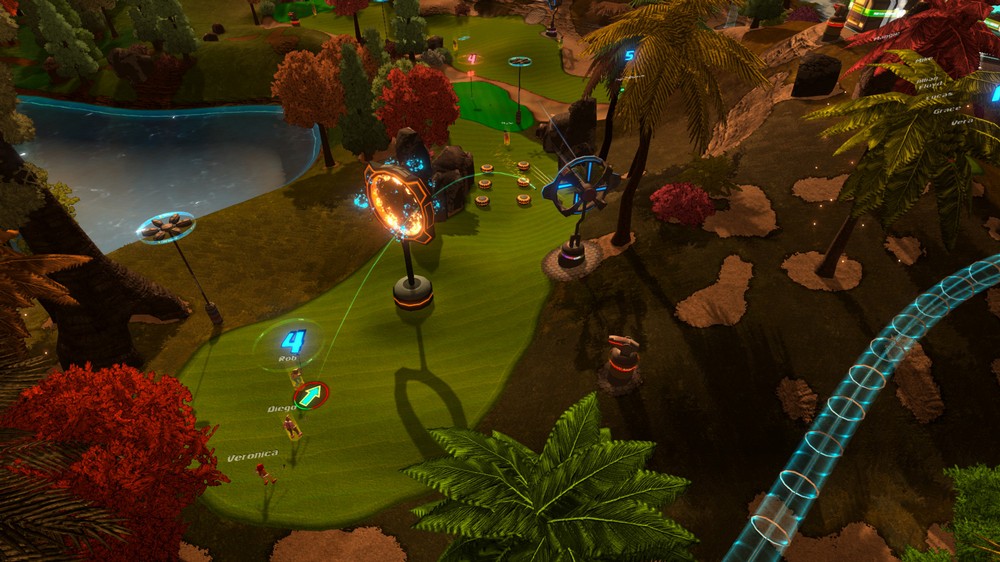 I’ve been going on now for more than 1,600 words and only touched on the awesomeness of this game.  There is so much content already here and more being added with each new update.  I didn’t even talk about being able to rent hover boards to speed up your golfers and increase traffic or the ability to actually play a round of golf on your own course.  You can also install all sorts of non-reality gimmicks like fire rings, ball bumpers, and windmills to blow the ball greater distances.  You also have area of effect boosters to help with driving, irons, and putting.  I had $20 worth of fun the first night I played this and I can easily see this becoming my new obsession.  If you love golf, management sims, or just want to keep 200 people happy at the same time then GolfTopia is a must-own game that is only getting better the more people play.  What are you waiting for?

Keep checking back for updates on GolfTopia as we will continue to update and livestream gameplay leading up to final release.