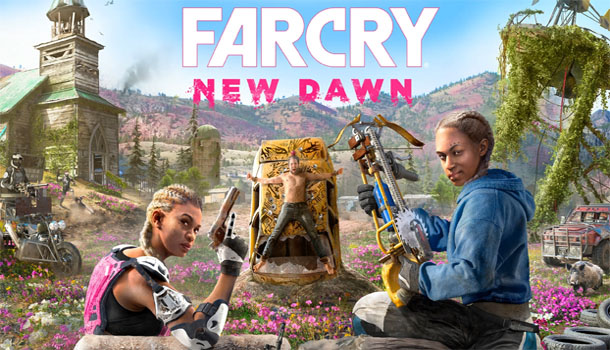 We all know the pattern by now…Every other year Ubisoft releases a proper numbered Far Cry installment and during the off-year we get a scaled back variation of the game to carry us through to the inevitable sequel. It all started with Blood Dragon followed by Primal and this year we get Far Cry New Dawn.   This latest game is marketed as a standalone sequel to Far Cry 5, and while technically anyone including newcomers could jump in and start playing; your enjoyment will be twofold if you have already played Far Cry 5.

Set 17 years after the nuclear finale of the last game, we see a whole new cast of characters as well as a few survivors from the past, but the real nostalgia begins when veterans of Far Cry 5 begin to explore the same map and locations that have been altered significantly by time and radiation. I can’t begin to count the times I said to myself, “I remember that church/gas station/lodge…” or any of countless other memorable landmarks. There are even collectible photos you can find from the past that you must match with their post-apocalyptic counterpart.

Far Cry games have always been the comfort food of gaming. There is a lot of mindless consumption going on here with a map loaded with quest icons that need clearing, and yes; there is usually a story involved. For these non-numbered installments I’m usually not as concerned with the story, which is good because New Dawn comes in rather light, both in quality and quantity. There is the big opening bit where you meet Mickey and Lou; twin sisters that come off overly edgy who run the local chapter of the Highwaymen, a group of notorious Mad Max style bandits that roam the countryside looking for loot.  They will appear in a few more cutscenes later in the game and drive the main plot. 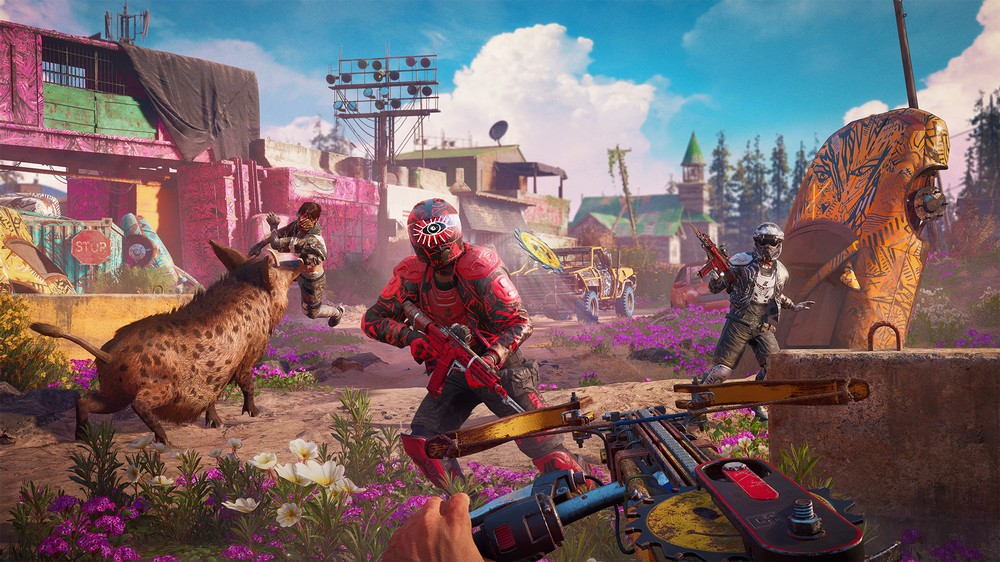 But they are only one of three factions you’ll encounter in New Dawn. Joseph Seed and his cult followers have moved north and formed a new, almost Amish-like community that lives off the land while shunning all technology. And then you have the survivors who have created an impressive village of their own inside the walled sanctuary of Prosperity. As the newest member of this community you’ll need to explore the land in search of resources that will allow you to level-up the various specialty shops in the village. The more you improve the garage the better your vehicles; the better the armory, the better your weapons. This goes on and on like the garden for health kits, a chopper pad for fast travel, a cartographer for purchasing maps that reveal resources, etc. I was impressed with just how balanced and integral this system was, because if you choose to ignore Prosperity you will find yourself woefully ill-equipped to advance in the game.

The story quickly becomes an afterthought as you embark on your quest to cleanse the map of any and all activity icons ranging from simple resource gathering to clearing Outposts or even venturing outside Montana on exciting new Expedition missions that can take you as far as San Francisco. You have the main missions that advance the story along with dozens of other side missions; some that will unlock an entertaining cast of Guns for Hire than you can summon to join you for that co-op experience, even when your human friends can’t play with you in the online mode.

Companions have their own unique personalities and specialties, so picking the right person for each encounter is important to success. Do you want sniper support or a stealthy hunter, or perhaps a Rambo preacher with a shotgun? More often than not I would find myself relying on Timber, easily the best dog companion in any video game to date. He would attack and kill enemies then loot their body and bring it to me. Good doggy! He could even wander innocently into an enemy camp, getting close to the targets before you issued the kill command while watching from a nearby hillside through binoculars. Best of all, Timber is quiet unlike the rest of the mercenary cast who continually engage in small talk…I’m looking at you Hurk. 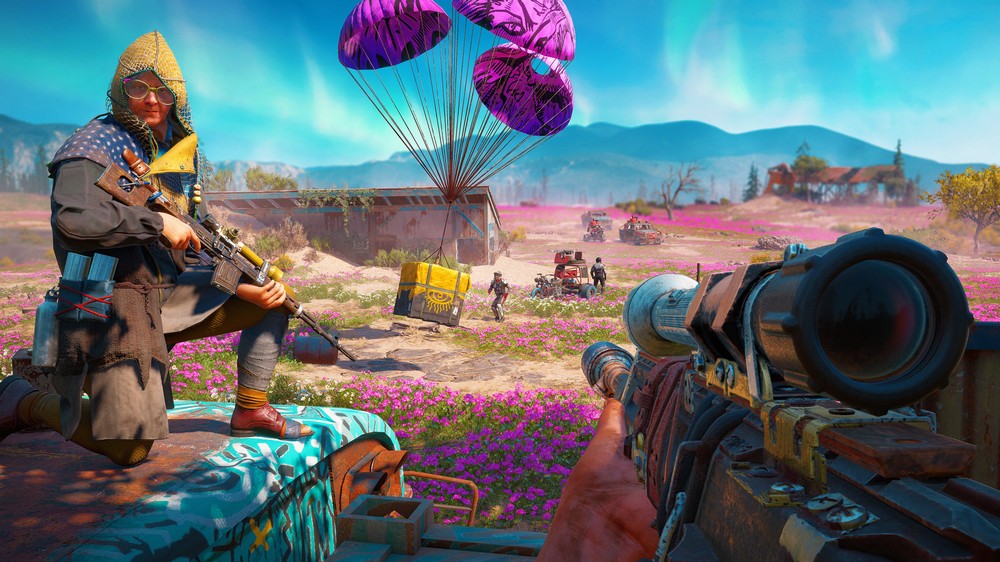 Wrapping up the varied types of content found in New Dawn, you have those fun stash treasure hunts scattered around the map. Many of these were the highlight moments of the game with their interesting clues and clever puzzle designs for reaching these stockpiles of resources and loot. Side missions are another great diversion with many exceeding the length and complexity of the primary missions. Even when you aren’t unlocking your next gun for hire you can be sure you’ll be exploring some crazy new part of the map.

Outposts are a pretty big deal in New Dawn and they follow the rules of previous games where you want to either take them down quietly or at least disable the alarm so they can’t summon reinforcements. Once you liberate an Outpost you have a new Fast Travel location along with a workbench for weapon modification and possibly a transportation node for vehicles, boats, and aircraft. The cool thing about Outposts are you can choose to scavenge them for instant resource rewards or liberate them with the option to scavenge later. If you do abandon an Outpost the Highwaymen will retake them and increase their power and rewards for when you take them back the next time.  It’s a nice scalable challenge that adds extra playtime to the game.

Far Cry New Dawn is not short on diversionary activities. If you own a fishing rod you can explore the various fishing spots around the map and go for that record catch. In addition to the aforementioned treasure hunts you also have real hunting where you can track and kill a large variety of wildlife and trade their pelts with the various shops and travelling merchants. One of the more fun activities are the random supply drops. Occasionally you’ll hear a plane flying overhead that will drop a large bundle of supplies into the world. You need to race all the other interested parties to the loot and usually engage in some furious combat to take possession of large quantities of resources. 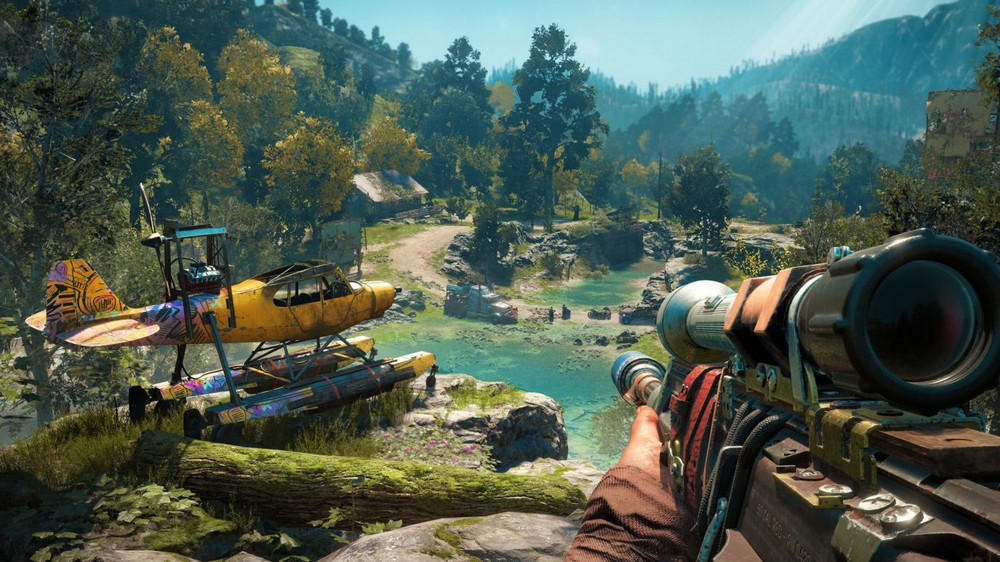 New Dawn adds some light RPG mechanics to the gameplay with a tiered level system for enemies and weapons. Both are now color coded to indicate their power, so when you start encountering purple and gold enemies and you only have blue guns it might be time to upgrade the armory back in Prosperity. There is also considerable resource collection proving once again that the world is held together with duct tape; even after the bomb drops. During your travels you’ll collect everything from mechanical and electrical parts to titanium rods, fabric, and more, then you get to decide how best to spend it all.   Do you upgrade your own personal stash or donate to Prosperity for potential future rewards?

Player upgrades come in the form of Perks purchased with Perk Points found/earned while playing the game or purchased in the in-game store.  Perks range from passive abilities like being able to swim or sprint longer or remain silent while sneaking to abilities like repairing a damaged vehicle or adding weapons slots to your inventory wheel.  Perks can also include gear like binoculars, a grapple, and even a wingsuit, but the most important item has to be the lockpick used to open all the safes and locked doors in Hope Country.

New Dawn does have an in-game store and you can spend real money to purchase everything from new clothing to Perk Points and even resource bundles.  As ludicrous as I find “paying to win” it seems even Ubisoft couldn’t take their storefront seriously.  The game is in no way crippled by the store, and at no time did I have the slightest urge to buy anything.  There is no grinding for XP or resources and no disparity of difficulty that remotely incentivizes visiting the store even once, despite the game baiting you with a few dollars of store currency, usually found in bunkers.  The entire system seems slapped on after the fact in the hope that losers with more money than time will empty their wallets to skip actually playing the game.  Even the wardrobe system seems like a money trap, as you only see your character in a short cutscene when entering Prosperity, and the choice of male or female is equally as pointless.  They story doesn’t change and sadly, some of the personal pronouns don’t either. 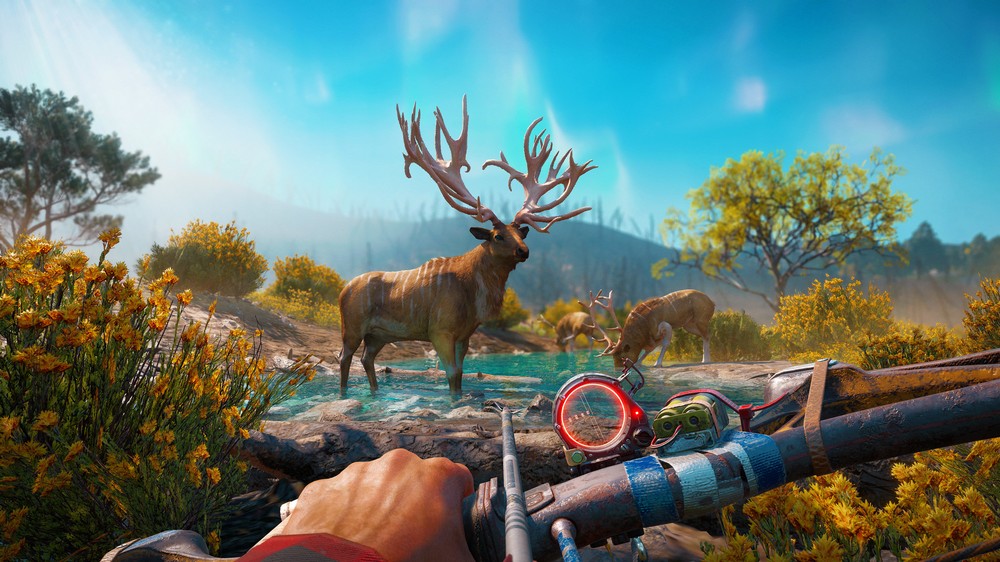 The look of Far Cry New Dawn is almost magical at times. Those who played Far Cry 5 and remember all those drug-induced levels with Faith will feel right at home in this world that looks like Mad Max on LSD. Buildings you may remember are still there but in various states of decay and ruin. The nuclear shockwave ripped all the branches from all the trees so you have these towering forests of trunks with only 17 years of new growth sprouting from them. It’s shockingly realistic and a great touch by the art department that a lot of people won’t catch. Nature has taken back the planet and perhaps even enhanced it a bit with rolling hills of colorful flowers and mutated plant life. Some of the animals have a slightly new look and more aggressive attitude like a certain body of water with giant mutant catfish that ate both me and my companion when we tried to swim across. There is a day and night cycle so you can appreciate the game in various stages of natural light and use that to your tactical advantage as well.

Technically, my i7 and GTX1080ti card combo could only muster 47fps in 4K but dropping the resolution down to 1080p and cranking every last visual setting to Ultra resulted in a gorgeous presentation that hit 96fps, which I locked to 60 with v-sync and let my Sony TV handle the 4K up-conversion. The game looks amazing and played flawlessly. I was using an Xbox controller, but the game does offer full remapping support for keyboard and mouse. 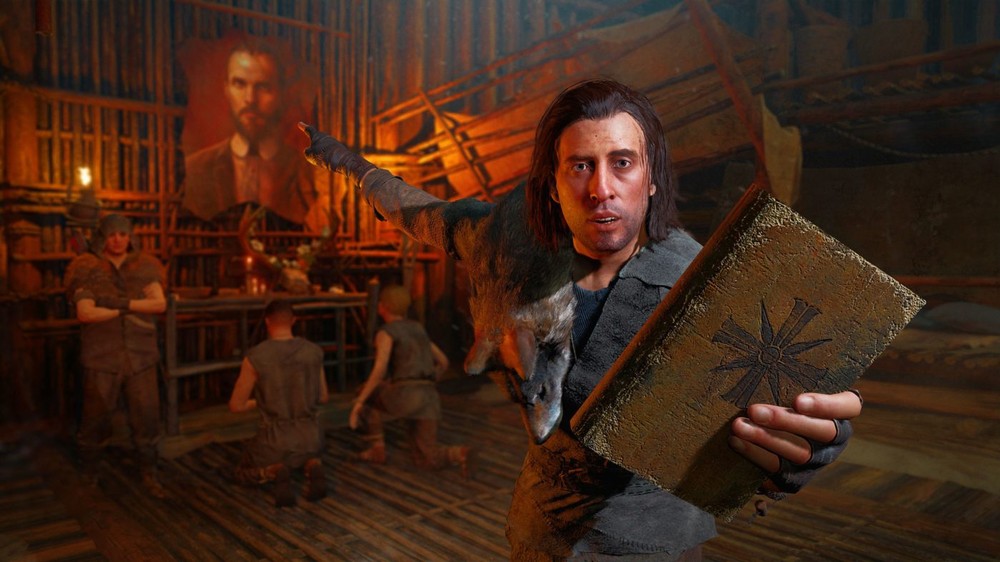 The audio was fantastic; both the 7.1 surround mix and the quality of the voice acting. There is a ton of chatter from both the people around you as well as frequent radio banter and collectible recordings in the stash bunkers. The music was a bit hit and miss for me. I enjoyed the dynamic score immensely, but the selection of “angry hip-hop” songs for the car radio had me scrambling to shut it off on those very rare occasions where I was actually driving somewhere. Players with a good surround sound home theater or set of headphones will find the positional audio cues add greatly to your situational awareness.

Far Cry New Dawn is admittedly a scaled back version of Far Cry 5 when it comes to map size and the amount of content; something that is reflected in the $40 price tag which is appreciated and justified. I’ve had more fun with New Dawn than dozens of other $60 games, but then again, I’ve always been attracted to games with large maps full of OCD-triggered icons begging to be eliminated regardless of any story. New Dawn fits that niche perfectly, offering hours upon hours of engaging combat, exploration, RPG progression, and comfort food fun. 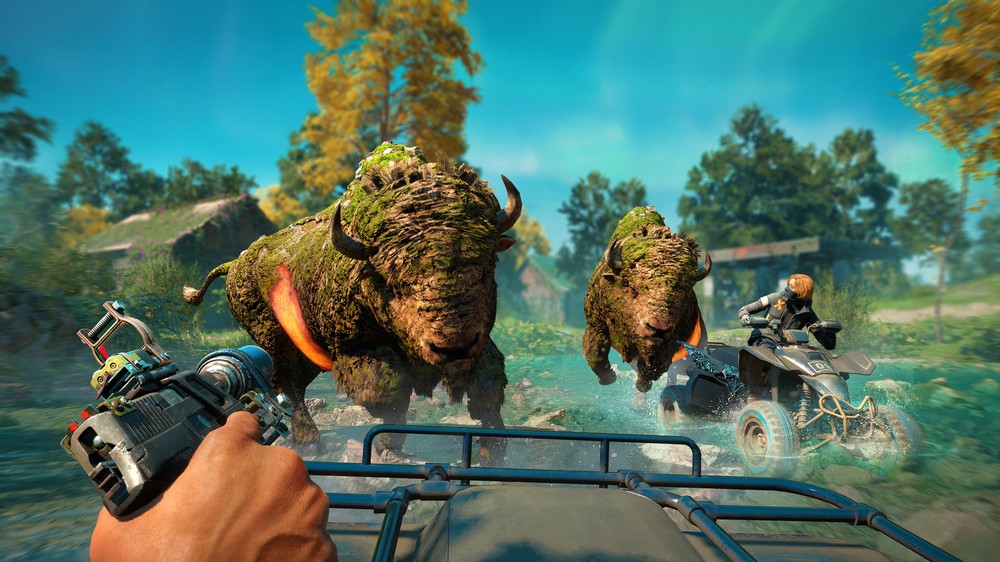 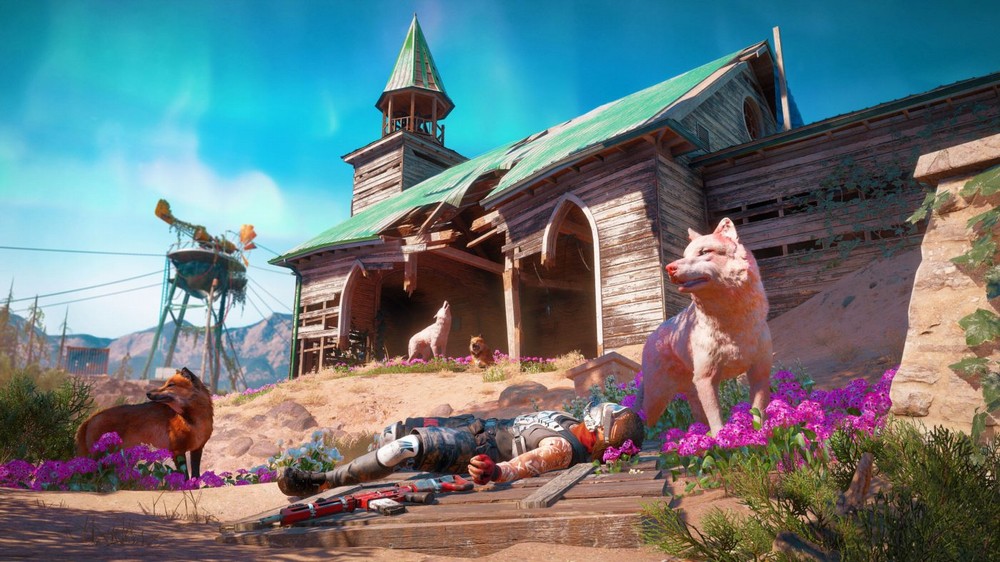 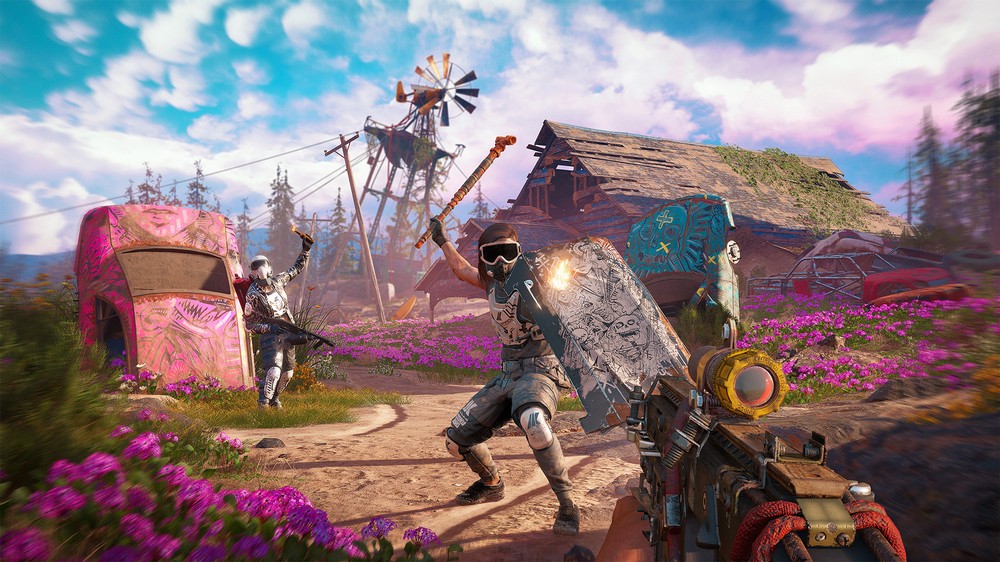 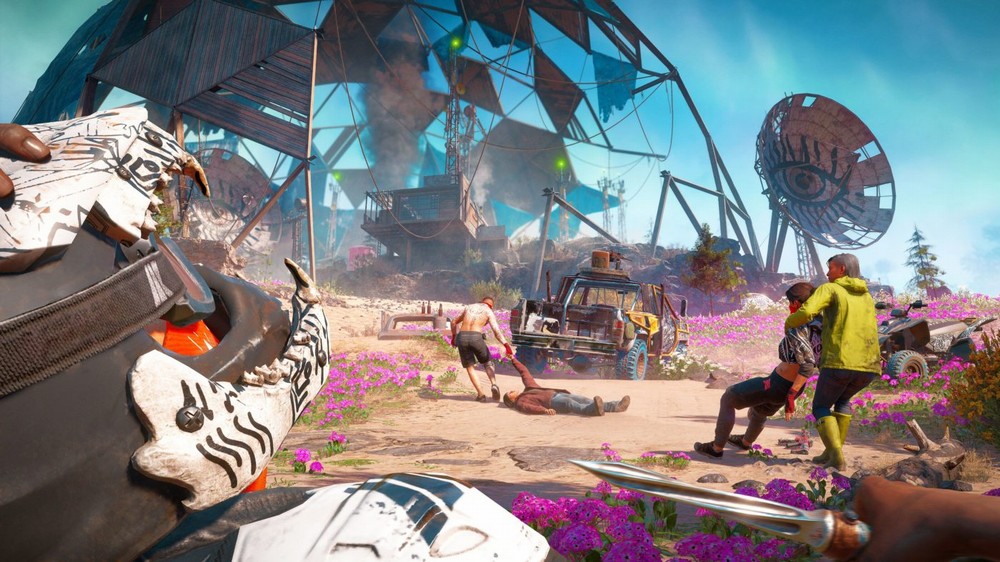 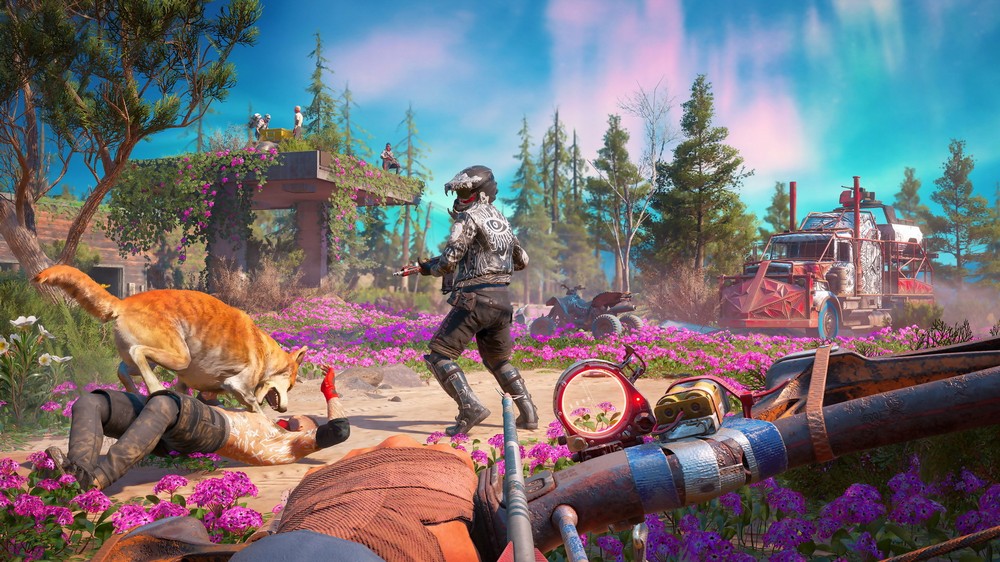 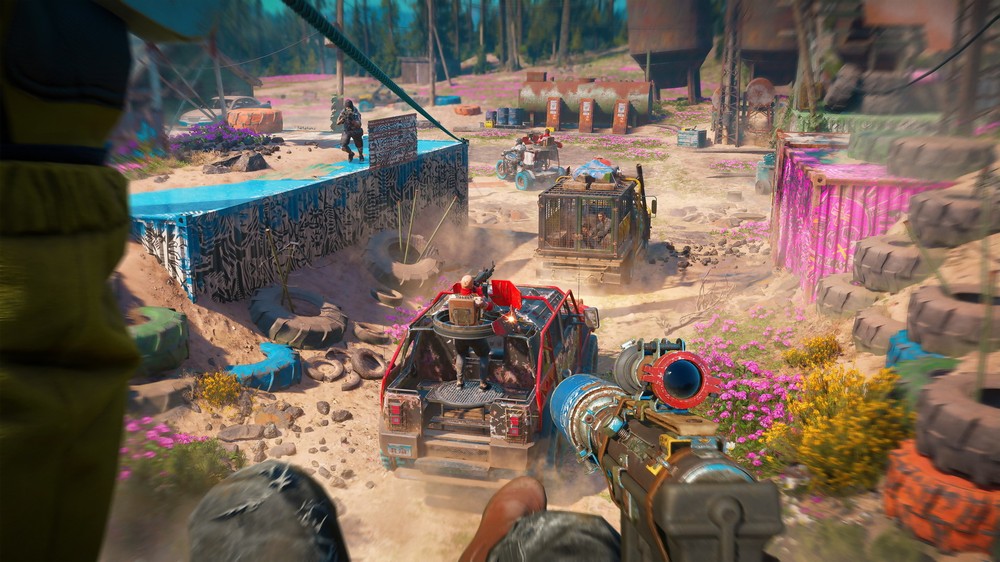