Attack of the Earthlings Review – Xbox One 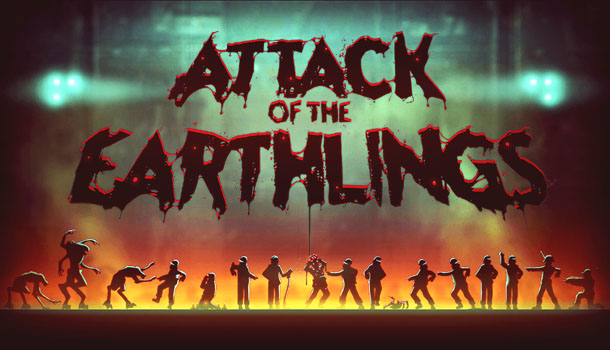 A fun turn-based strategy with some dark comic charm.

I feel that with each new RTS title I play XCOM is the current common standard that I hear or read that people continue to judge the merits of other real time strategy titles by. To be fair I’ve played several mainstream RTS titles including that one over the years so I get it. So it was kind of refreshing and ironic when I got to come across a title that parodies the genre in a rather interesting way with the newly released Attack of the Earthlings for the Xbox One.

Very few games feature you playing as the alien race and even less that are strategy based. In an inverse manner you must protect your planet X13 from the invading capitalists of the Galactoil Corporation in Attack of the Earthlings. To do this you start out alone playing as the Matriarch of the Swarmers, a rather aggressive insectoid race, which acts not unlike the legendary Kerrigan. At first though you play through a tutorial covering and laying down the groundwork rules. 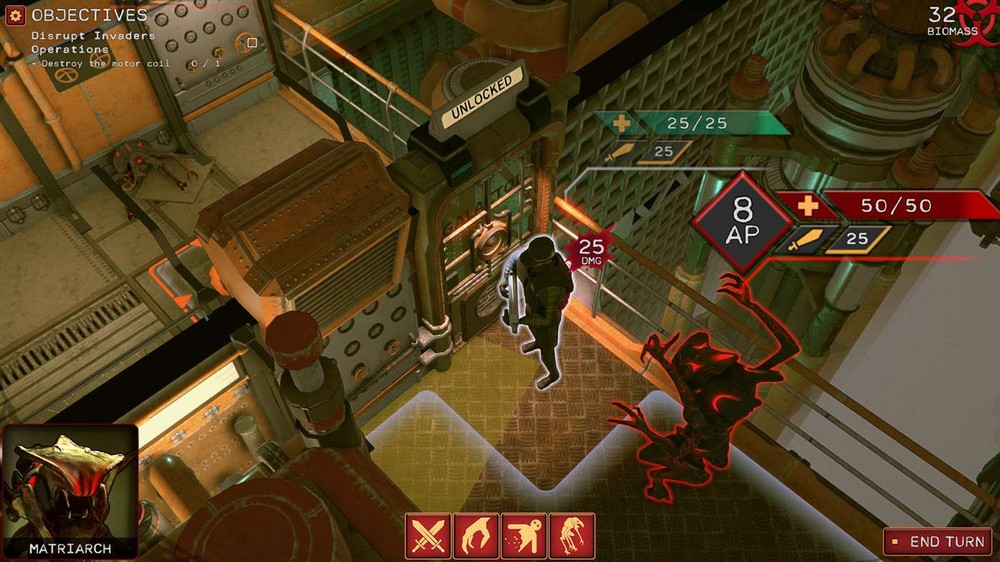 One of the first rules taught is that of stealth, as you are often outmanned and outgunned by enemies that are often (but not always) just as easy to kill as you are. This is also where one of the rather intricate two-fold act of consuming the corpses of the often hapless colonists of this in-it-for-money corporation is made abundantly clear. By consuming your defeated foes you not only remove bodies to be found which will alert patrols to your presence but you also create biomass which the Matriarch needs to spawn smaller troops to help you defeat the invaders in all their forms.

Even with added troops this is still very much a stealth oriented exercise in lethal execution. That’s part of the charm though of this dark comedy of an experience as each tactical choice can be satisfying but at a moment’s notice disastrous especially if the Matriarch is defeated. Its game over if she gets defeated so coordinated planning is just as important as using the abilities of each new unit. 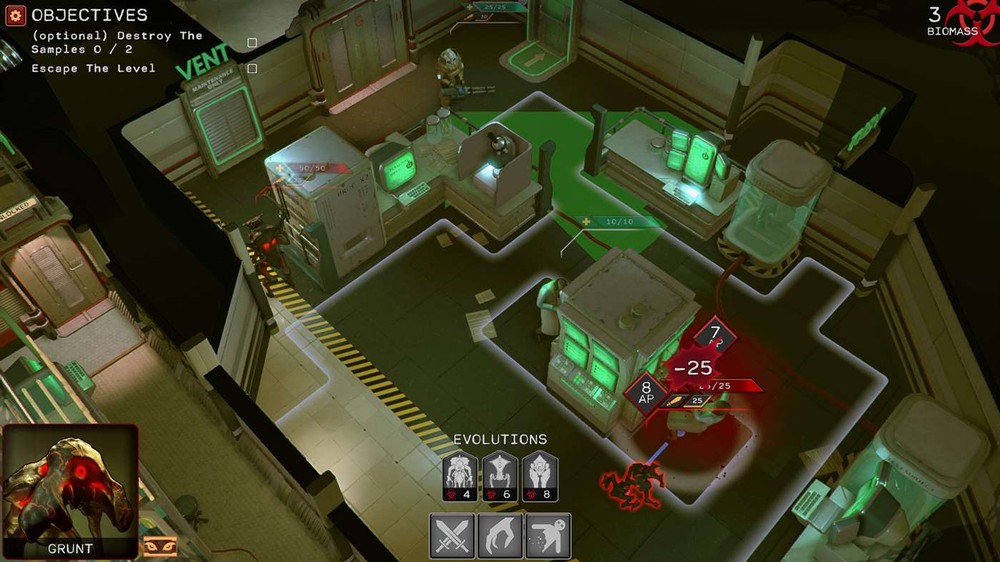 Easily one of my favorite features of Attack of the Earthlings is the ability to take down multiple enemies or the same target simultaneously in coordinated attacks. This is done by using the group attack ability for the setup and then using L3 and R3 buttons to trigger the action. This is particularly useful for clearing several close enemies or one tougher enemy that has more HP than a single attack can dispatch. This feature is ultimately more useful for the former as dispatching humans does create noise alerting any nearby humans making encounters potentially more dangerous.

But for every dangerous encounter or blood puddle created there is the well-crafted humor that comes in the form of spoken dialogue or cutscenes. These bits offset what would otherwise be a bloody 80’s horror flick but one where you’re constantly rooting for the bad guys; except you are the “bad guys” executing every attack in a world whose cell-shaded visuals put it almost in the same level of artist humor that Portal does with it narrative. The music and sound effects also do a good job of balancing the moments of menacing dread and the comic relief quite well. 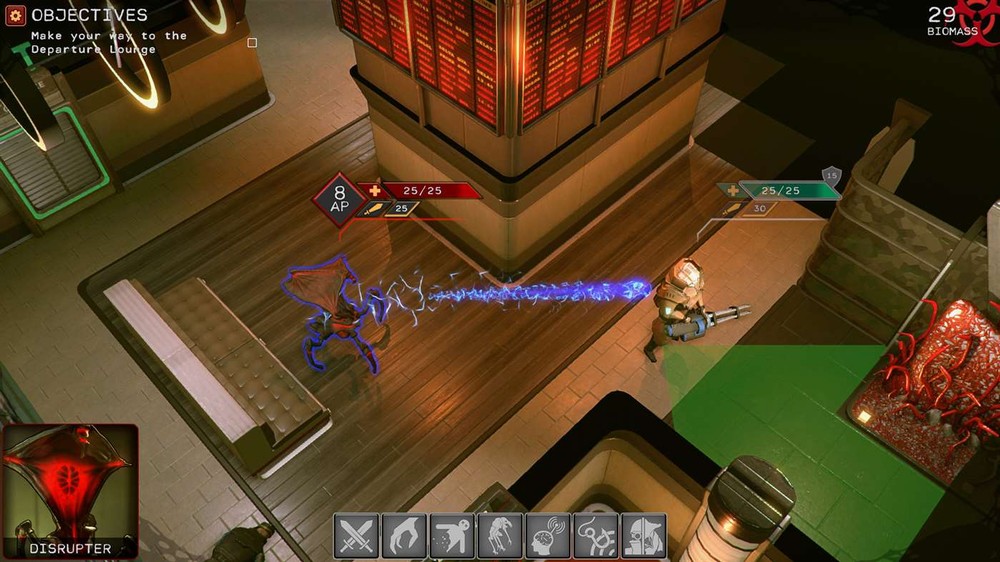 In fact there is any number of little ironic signs or situations that showcase how tongue-in-cheek the game really is. Things like a guy smoking in front of a “Smoking Kills” sign right before you kill him is poetic irony. There is even an accident free counter that tracks in hours instead of days which was oddly hysterical when I dispatched a human near it to see it change to zero.

As enjoyable as its humor and combat is there are a few things that drag the experience down a bit. Most noticeable is that the attack animations are a bit stiff, requiring you to wait while units turn to line up with their target before executing your command every time. The other thing was that the world felt restrictive mostly due to a limited zoom and somewhat awkward camera controls that make locating objectives harder than it needs to be. 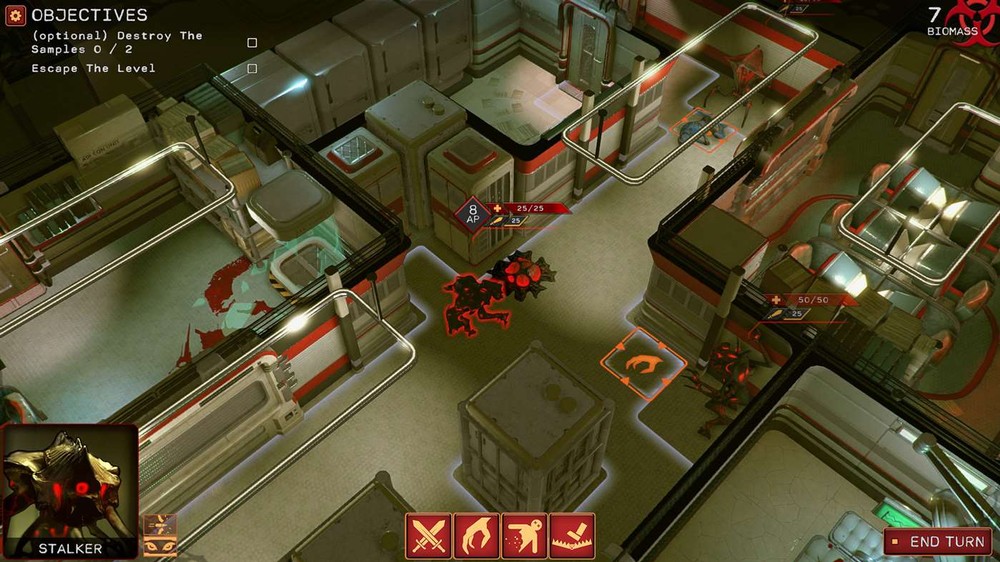 One thing that I found particularly useful though is when it came to controlling your troops and the ability to use the shoulder bumpers to switch between them in a rotation. This is vital since there is no map to use to locate them otherwise, especially when you have them spread out. You can of course move the camera and track them down manually, but it’s not as fluid as it would be with the more traditional mouse and keyboard setup on PC that favors this genre.

Despite these shortcomings Attack of the Earthlings does do a lot right in its execution of its combat and unit progression. The story itself isn’t very long and with only 7 levels to go through it took me about 10 or so hours to get through them with a little trial and error. The humor and inverse invasion of the story itself however is its shining feature and what really stuck with me. I haven’t had this level of alien led strategy fun since the release of Heart of the Swarm several years ago. So if you want to see a turn-based strategy with some dark comic charm then you have to check out Attack of the Earthlings for the Xbox One today. 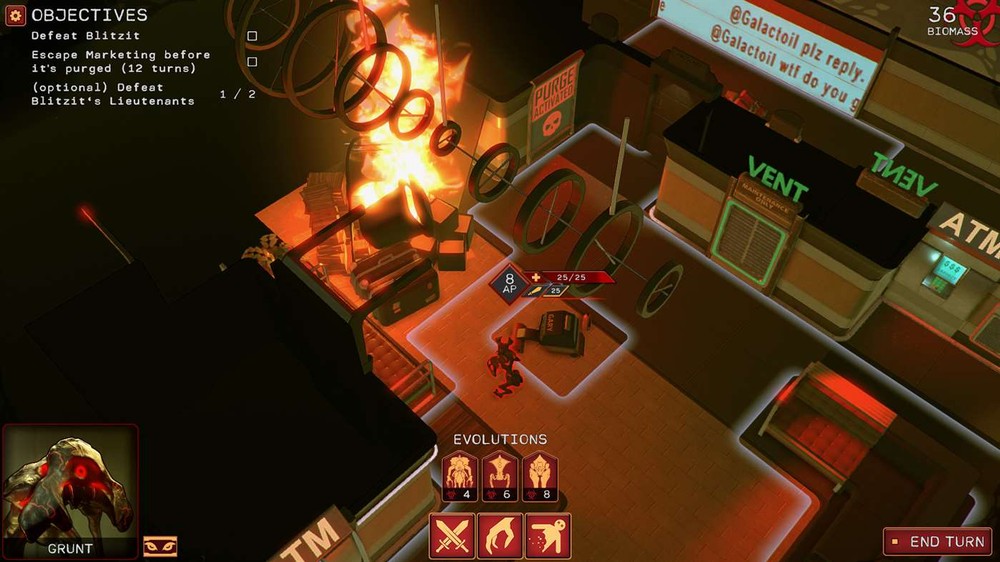