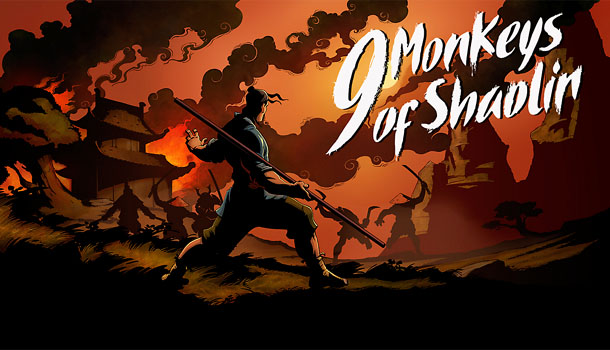 Slow to start but ultimately a fast-paced and punchy action brawler.

With the recent releases of Streets of Rage 4 and Battletoads, it feels like there has been a slight resurgence in the beat-em-up genre. 9 Monkeys of Shaolin is the most recent entry into this sphere, and coming from Moscow-based Sobaka Studio, it takes players to 16th Century China and Japan. Playing as Wei Cheng, your task is to defend your homeland from a variety of invaders and sinister plots, using a mixture of martial arts and special abilities.

9 Monkeys of Shaolin begins with Wei Cheng, a humble fisherman, seeing his village burnt to the ground and its inhabitants slaughtered. After being taken in by a local monastery, Wei Cheng pledges to become a martial arts master and exact revenge on those responsible, but soon becomes embroiled in plots far beyond what he initially thought possible. In truth, the mainline narrative is largely forgettable and full of familiar tropes, but it serves as a decent excuse to punch and kick your way through near-endless numbers of enemy goons in a variety of environments. 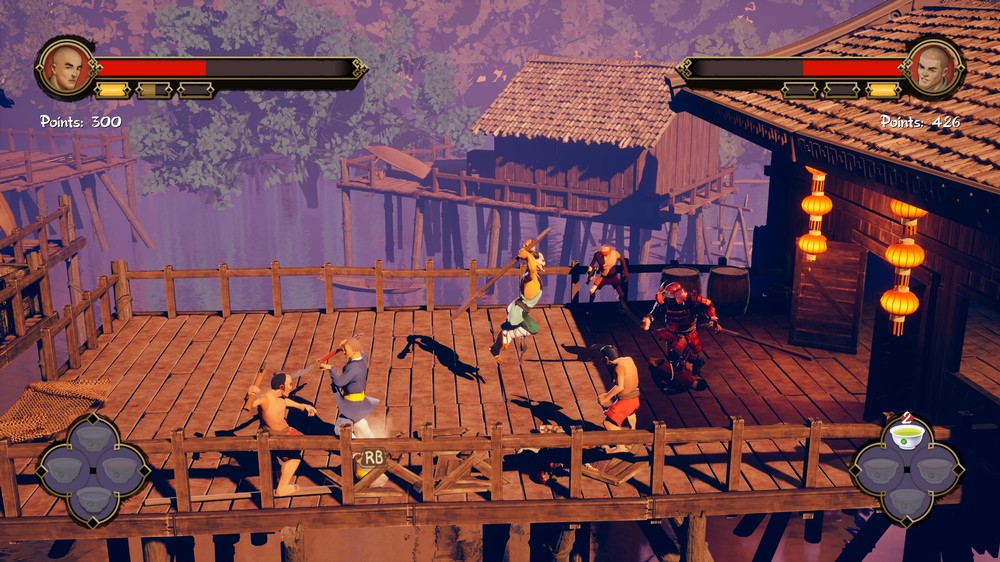 A lot of these environments are functional if unremarkable, with Wei Cheng battling his way through villages and fortifications for the majority of his adventures, but there are some levels which were genuinely impressive. A great example of this comes early on, where Wei Cheng is attempting to infiltrate a village in the rain, with lightning striking the ground around his feet. There’s another level later on that takes place in a bamboo forest, with enemies jumping out of the undergrowth and climbing down the bamboo to attack you from above. These levels stand out due to their excellent visual design and great use of color and are a definite highlight of the experience.

Regardless of the setting, each of the levels within 9 Monkeys of Shaolin function in a similar manner. You’re required to travel from left-to-right, beating up enemies in groups, with progress locked until the entire group is beaten. This formula will be familiar to anyone who has played a game of this type before, but it was still a little disappointing that there weren’t many variables to this setup throughout the course of the game. There are rare occasions where you’ll have to defeat an enemy to gain a key that will open a locked door, and a couple of levels where (gasp!) you’ll travel from right-to-left, but for the most part each level is a copy and paste experience delivered on top of a mixture of environments. 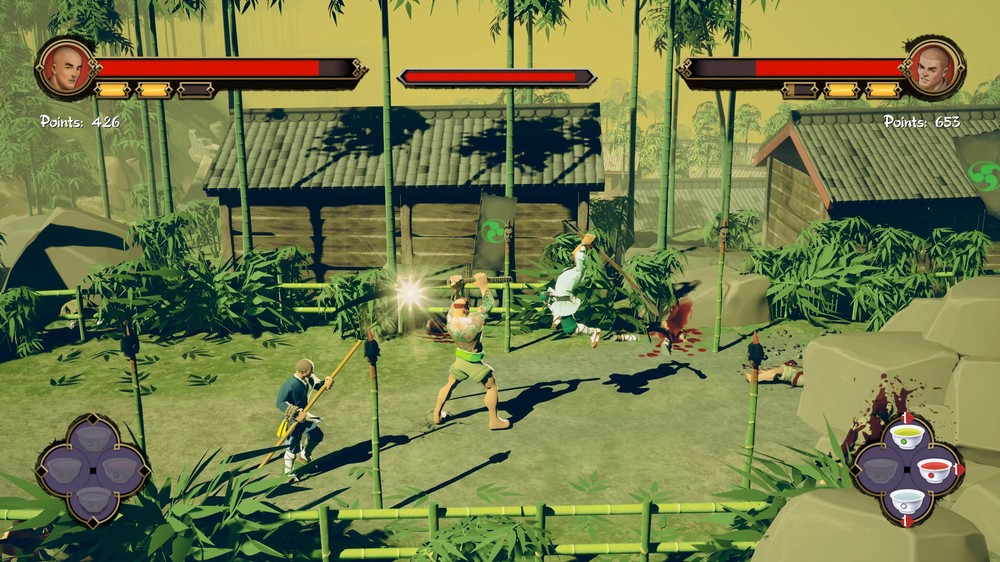 Tough the lack of variety in gameplay mechanics might seem like a detraction from the main experience it’s actually a fairly easy issue to overlook, partly due to the gameplay, and partly due to the snappy pacing of the experience. Each level can be beaten in five to ten minutes at most, and this means that you’re frequently travelling to new locations, seeing new things and fighting a variety of different enemies. The story of 9 Monkeys of Shaolin is broken down into chapters, and as well as taking you to new locations, each new chapter introduces a next group of enemies. While most enemy types can fit into familiar categories, requiring similar tactics to defeat, the variety of visual styles and abilities means that you’re frequently being asked to learn how to defeat your new foes, which helps to keep you on your toes.

While the gameplay of 9 Monkeys of Shaolin might initially be seen as shallow, as you make your way through the game you are able to unlock a selection of new abilities and equipment that go a long way to allowing you to tailor Wei Cheng’s fighting style to your own preferences. Wei Cheng starts off with a basic arrangement of light, medium and heavy attacks alongside parry and dodge moves, but by completing levels you earn upgrade points which are used to increase the effectiveness of these abilities. As you finish certain chapters you also unlock special abilities for Wei Cheng which allow for stronger moves and area of effect attacks. There are also plenty of pieces of equipment to unlock and assign, and these provide Wei Cheng with a variety of passive enhancements that can really change up how he fights. By the end of the game, Wei Cheng can be almost unrecognizable from how he played at the start of the experience, and this fact adds a lot of motivation to progressing through the game and exploring outside of the main story. 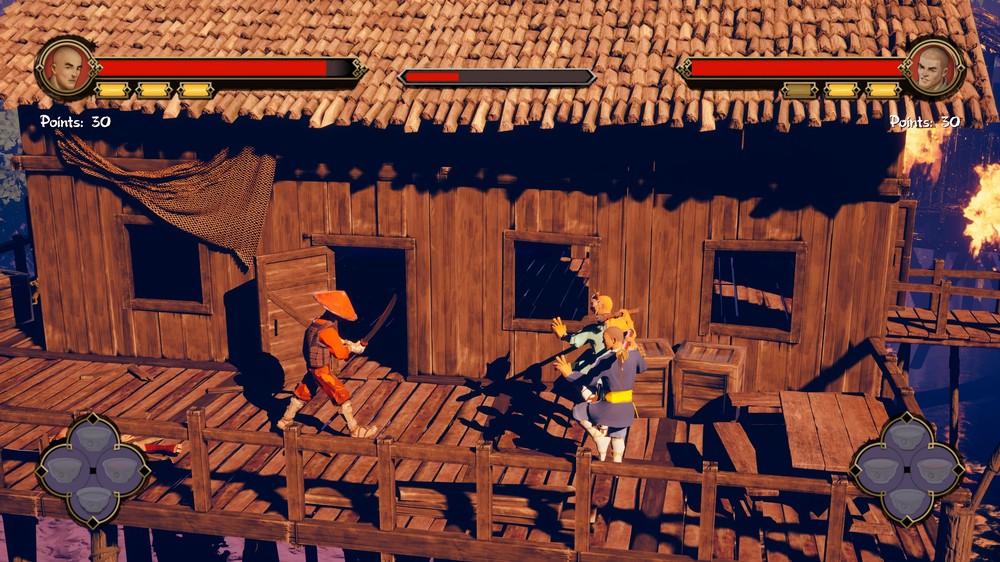 In each chapter, you’re given a choice of following the narrative, or of taking part in optional missions that can provide you with extra upgrade points or new equipment. It’s definitely recommended to play through these missions, as some of the later levels can really ramp up the difficulty. For the most part, 9 Monkeys of Shaolin delivers a well-balanced difficulty curve, though I did find that some of the end of chapter bosses presented a challenge that was above and beyond what I had experienced previously. The end-game boss in particular was quite far outside of the challenges I had already overcome, and I was certainly glad that I had improved Wei Cheng’s skills as much as I had before encountering them.

9 Monkeys of Shaolin was a welcome surprise, as I hadn’t heard much about the title before booting it up for the first time. It starts off a little slower and more methodical than your usual beat-em-up, but by the end stage of the game you’ll be flying around the screen at near-breakneck speed, pulling off combos and getting barely a scratch in the process. Though the levels in isolation are quite short, there are quite a number to get through and it’s well worth returning to some to gain items that you might have missed or to earn extra upgrade points that will help you further down the road. With both local and online co-op functionality, 9 Monkeys of Shaolin is well worth picking up for fans of the beat-em-up genre and would also be worth looking at for those interested in playing something fast-paced and punchy.