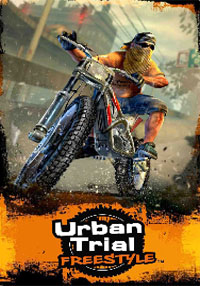 While the comparisons of the new Urban Trial Freestyle game with the legendary puzzle-platform-racer, Trials and Trials Evolution are obvious and endless, Urban Trial Freestyle has one thing going for it on the PS Vita that no other similar game has – it’s actually available on the Vita, and sometimes in a world of knock-offs, exclusivity has its rewards.

For a tiny package on a tiny screen Urban Trial Freestyle is packed with content. Spread across five themed environments are more than 45 levels to master in both Time Trial and Stunt modes. Obviously, the former has you racing against the clock while the latter has you performing specific stunts in specific places for points. The levels themselves are quite complex, often with a primary mid-level route and usually a low and/or high road alternate path buried in the scenery. You may even spot a particular path you cannot access until you have earned enough cash to purchase specific parts to enable your bike to reach them. These upgrades affect your top speed, acceleration, and handling providing 64 possible bike combinations. Collect various cash bag loot drops within the levels to boost your bank account – just another reason to explore all areas of all the levels. 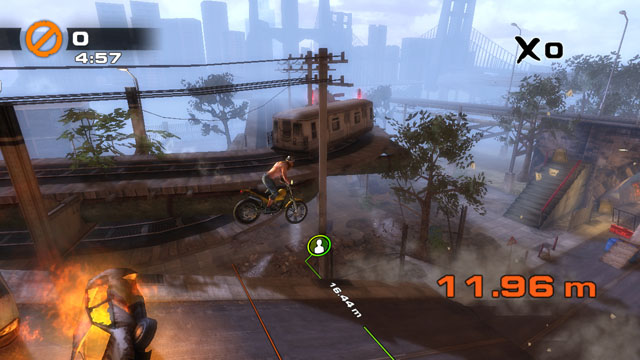 Urban Trial Freestyle is particularly suited for the Vita; not that it makes use of any advanced features beyond the camera, which can snap your photo then insert your mug shot into the game to stamp your victory on a particular stunt billboard or the game’s final tally screen, but more so by its sheer design. A level in Urban Trial Freestyle can last anywhere from 30-90 seconds; the very definition of “pick-up-and-play” game design where you can knock out one or two levels during a TV commercial break. The game plays surprisingly well using the left analog stick for smooth analog control over your rider and his ability to shift his weight on the bike for stunts or to lean forward in numerous steep hill climbs.

You can (and likely will) burn through all the levels in this game in one or two short sittings but the joy in Urban Trial Freestyle is the almost obsessive-compulsion you have to keep coming back, either to beat your own previous attempt or those who have already staked their claim to in-game photo ops and post-level leaderboards. Plus, once you start adding those upgrades, replaying the earlier levels will be a completely different experience as fast speeds mean higher jumps to previously inaccessible areas of the level. Sadly, there are no level creation tools, so we are at the mercy of the developers and future DLC for any new content. 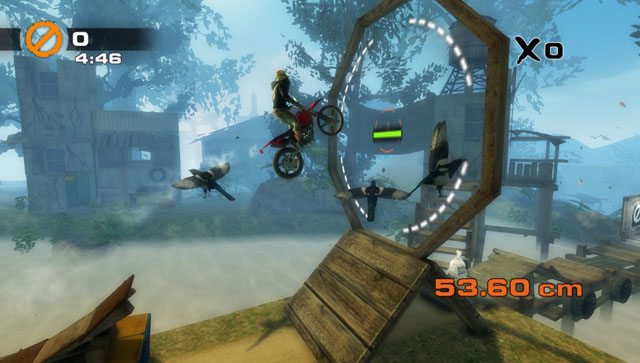 The game looks great with a definitive urban theme, both in the opening montage as well as the basic levels designs and environments that cross between cities, slums, and factories. You can definitely see the influence of Julien Dupont, the “godfather of urban trial freestyle” in the overall theme of the game and it’s presentation. Julien Dupont is known around the world for his unique street style and technique, mashing down barriers and setting new records.

There is almost always a depressing overcast shadow in the skies and sometimes it’s even raining. The physics are virtually spot-on, perhaps slightly exaggerated for effect, and you’ll need to quickly master gas, break, and body weight shifting to keep the rubber on the road – or whatever surface you’re driving on. The various stunt cues and meters in the game are seamlessly integrated into the environments so they aren’t distracting, and the camera seems to always provide the perfect angle and distance for what dangers lie ahead. My only minor complaint is the bright orange ghost rider you often find yourself racing against. It’s a poor color choice and it’s not transparent enough, so until one of you pulls away from the other it can be very confusing. 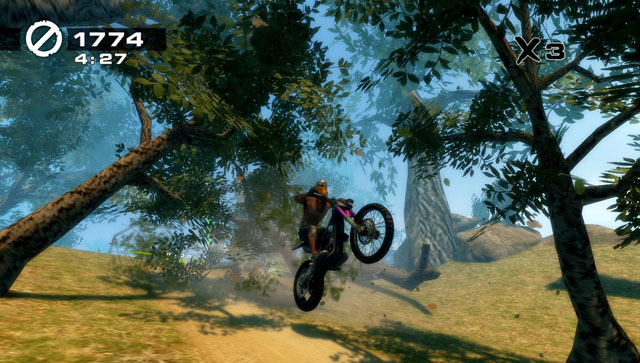 The music is pretty grunge but is also kept to the opening montage and the menus, leaving only the throaty, weed-whacker-whine buzz of your engine RPM’s to assault your ears during the actual levels. If you play long enough you’ll be able to gauge your speed by this sound and improve your stunts and times.

It’s a shame this game couldn’t have been released as a cross-platform title that you can go back and forth between the PS3 and the Vita, so for those who want to play on both systems you’ll need to purchase two separate games. And while this game might be just a bit too shallow for console gamers, I found the addictive, almost puzzle-like gameplay buried in this visually striking motocross game to be the perfect fit for the PS Vita, and I highly recommend adding it to your digital library. 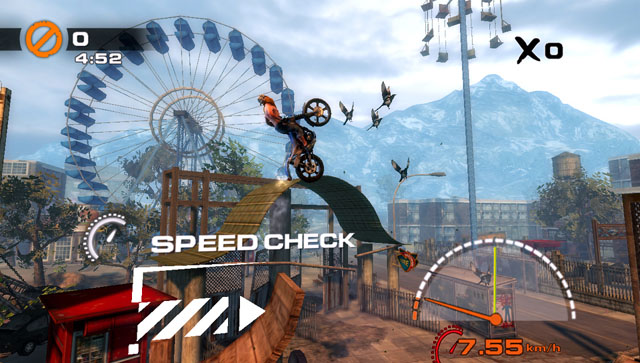 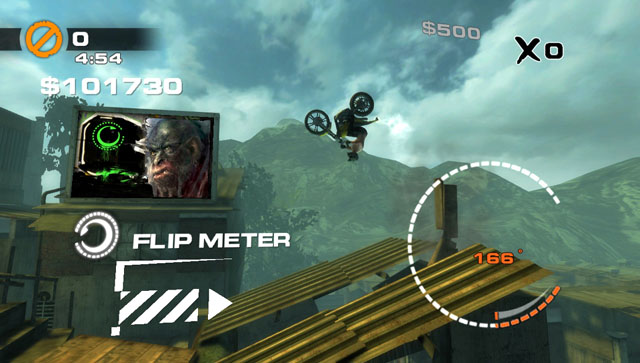