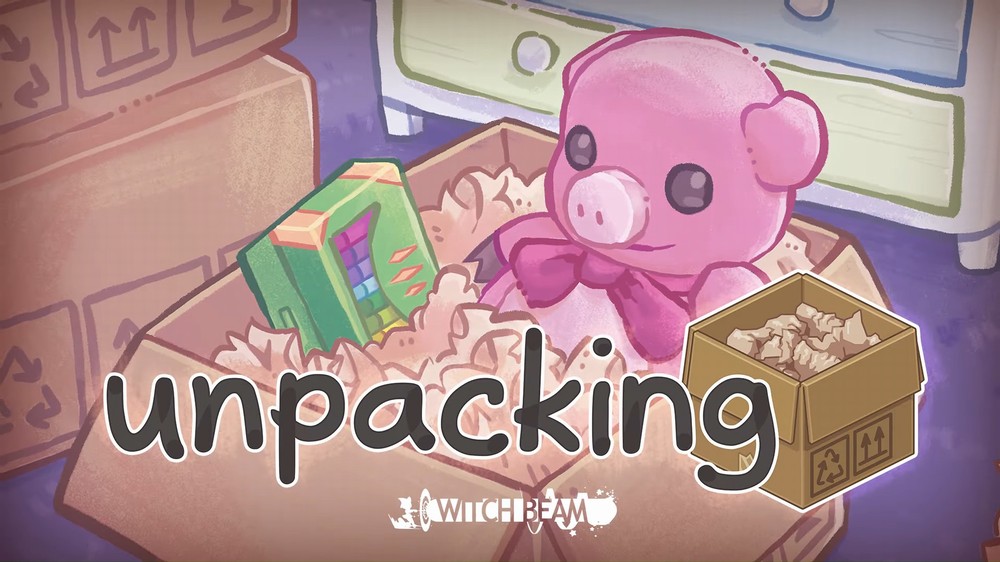 Cardboard boxes and uncertainty fill the floors of your new apartment. You’re already exhausted from filling boxes, loading them into a truck, driving to your new place, unloading the truck, and now you look at the empty walls and shelves, overwhelmed with the task ahead of you. Witch Beam’s Unpacking wants to take the stress out of moving and for the most part, it succeeds.

Unpacking is a puzzle game with no timers, no fail states, and no to-do lists. You’re presented with a furnished room and simply have to unpack the contents of numerous boxes. That’s it. Once you’ve unpacked, you’ll move on to the next level and the cycle begins again. 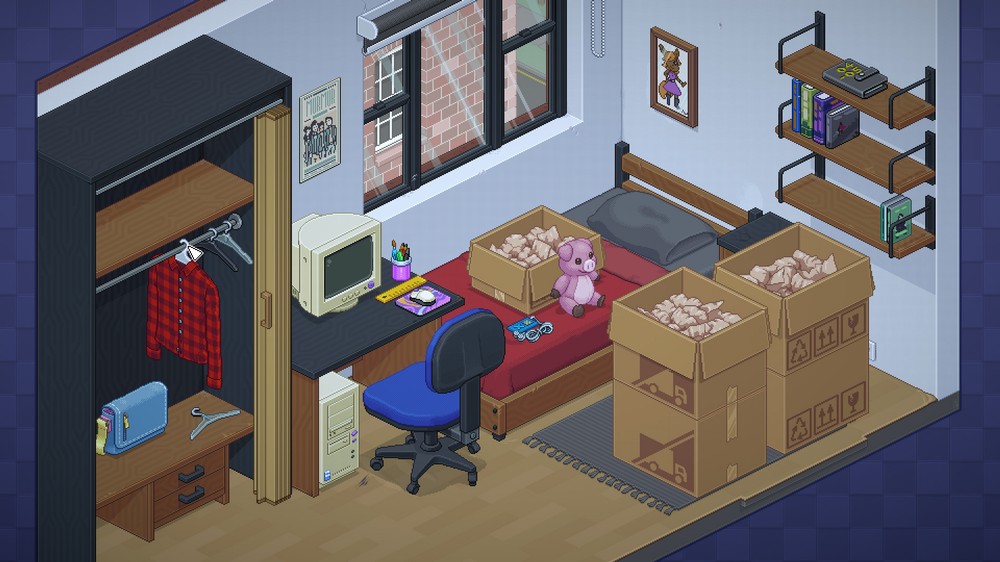 Sometimes the game will not like your placement of certain items (IE a toaster on the counter). This can be frustrating, especially when there are items in multiple rooms that may be “out of place.” The fixes are usually quick, but for a game going for a relaxed experience, I was surprised that things were out of place. On the flipside, the game does use this mechanic in an interesting way to tell you something about the main character during one of the moves. I went from annoyed to enjoying this aspect. It had challenged my expectation and made me realize I wasn’t moving myself; I was moving a character.

You go from unpacking a single room to an entire house over the eight stages in the game. The nameless character goes through the usual transitions in the moving metamorphosis; her first childhood room, her college dorm, and a return home after a breakup, just to name a few. If there’s one thing I needed more of in Unpacking, it was time between moves. I’ve never finished unpacking and said, “Can’t wait to do this again.” Upon finishing a level, the game takes a photo of one of the rooms and saves it to a scrapbook before transitioning to the next level. One level in particular ends with a cutscene. I can’t help but think additional cutscenes would help break up the levels, especially when you find yourself unpacking a lot of the same things multiple times. 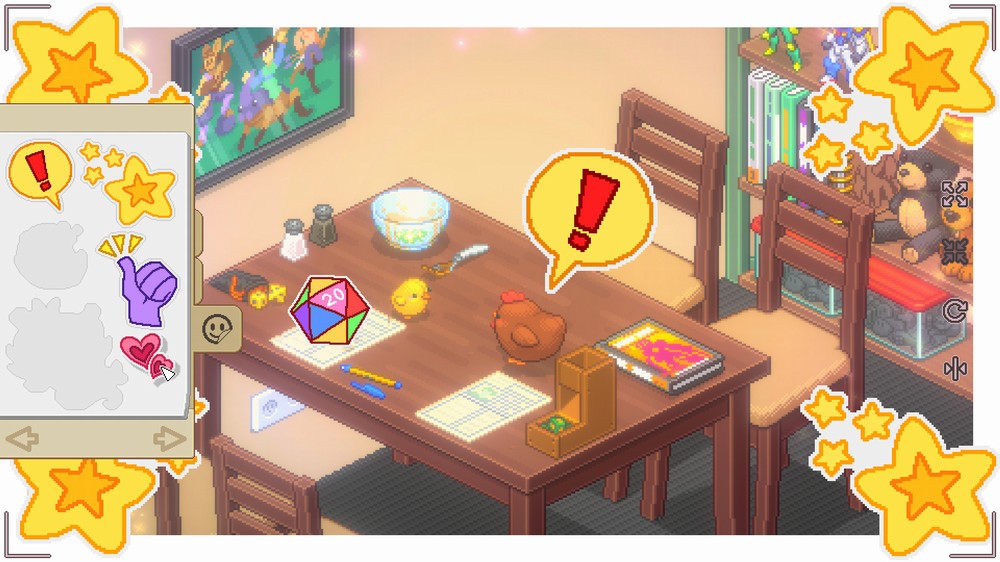 There’s a small amount story in Unpacking, but a lot of it is communicated through the items you dig out of boxes. Just like the main character, you’ll grow attached to the stuffed pig after unpacking it for the nth time. This is where Unpacking shines. This dumb pig has no value, yet it’s found a home everywhere the main character has called home. You’ll reflect on your things (like a stuffed bear named Fred that has made numerous moves with you), all the thing’s you grown out of, the things you hold onto (Fred), and what they say about you.

The pixelated art design is relaxing and each living space feels unique. At one point, you move in with a partner, and the space feels alive. You search for space for your things, but you don’t want to invade or overstep with this move. Some of your items may find a home among your partners things. Others will be stowed away, in hopes of returning to their glory in a later move. In the case of the yoga mat and dumbbells, those will always be stowed away (let’s be honest). Players with a keen eye will recognize some of the pixelated DVD covers and game box art. Small details like these really help add to the overall experience and place each move into a time capsule. 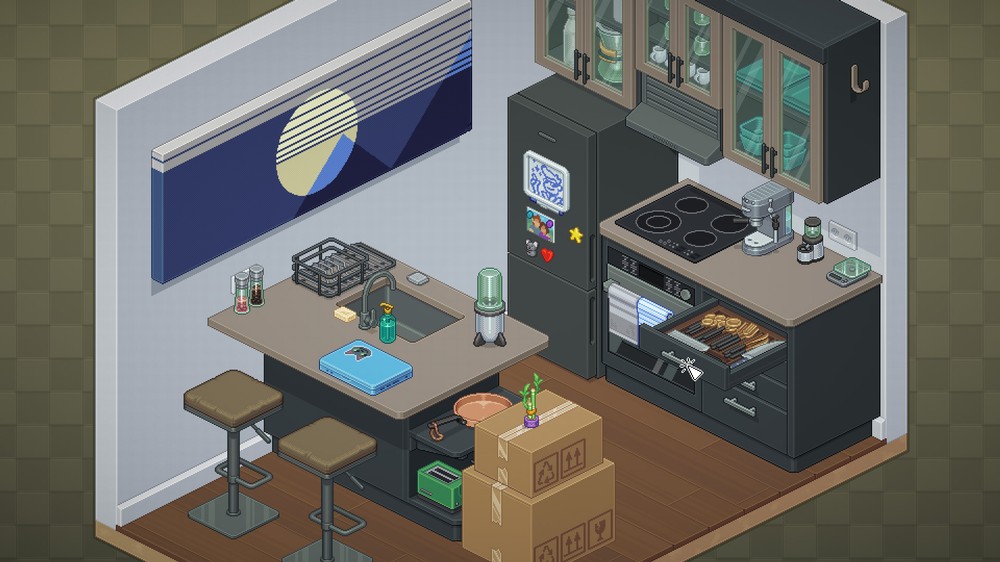 The soundtrack by BAFTA award-winning Jeff van Dyck is the perfect complement to the art design. It’s relaxed and reflective (the complete opposite of van Dyck’s previous work in the Total War series). Can I be honest though? If there were ever a “Podcast Game” Unpacking would take that title.

Some additional bells and whistles include stickers which can be placed on the screen at anytime and a picture mode with numerous photo formats. One particular standout is the automatic GIF generator. Following a level, you can create a GIF of a room you just finished unpacking. In later moves, it’s limited to a single room, but it’s such a cool feature, it gets a pass on that.

With no stakes, no complicated mechanics, and a bunch of fun features, Unpacking is a game I can see in anyone’s Steam library. A game there for when you need a pallet cleanser from work, life, and all the demands from other games. 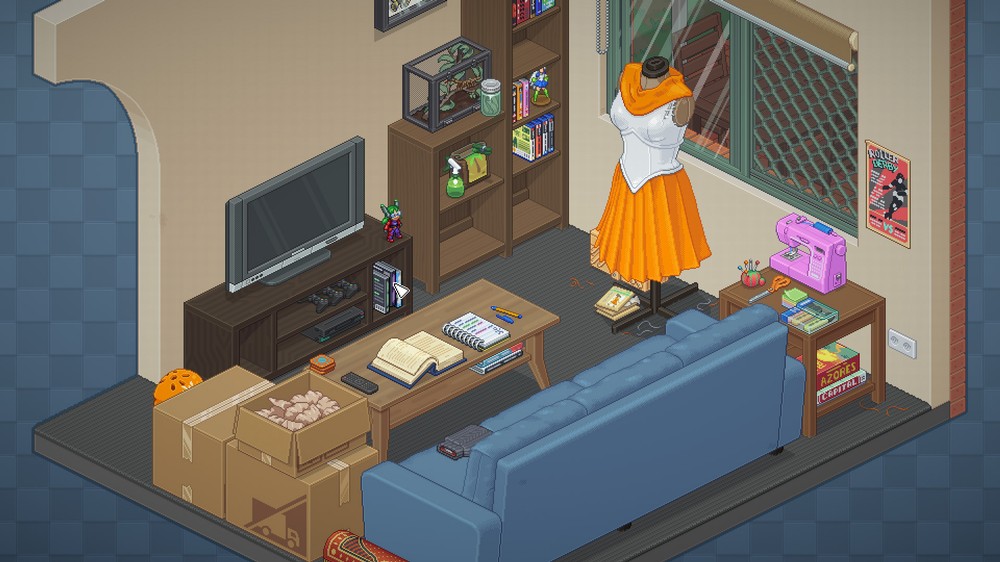 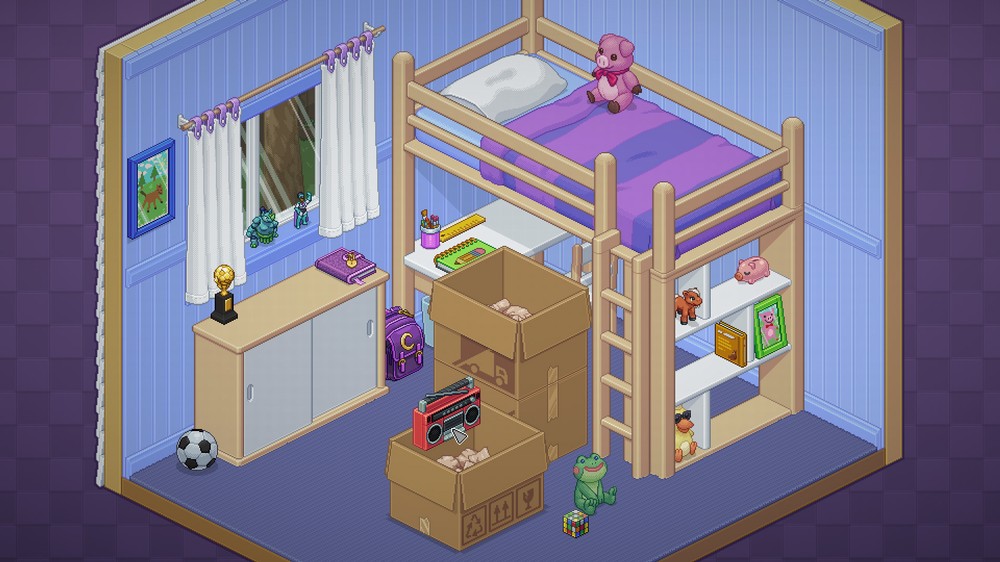 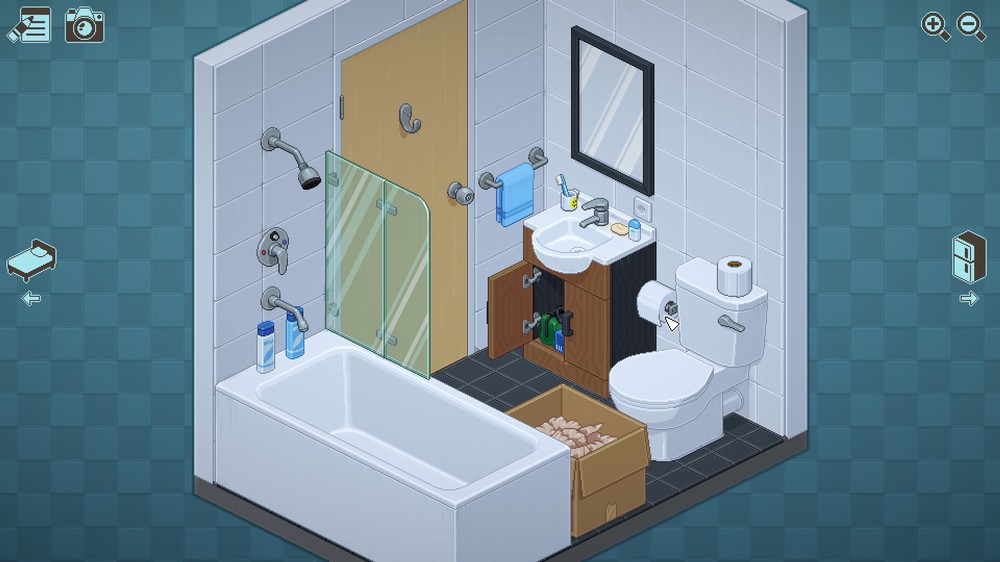