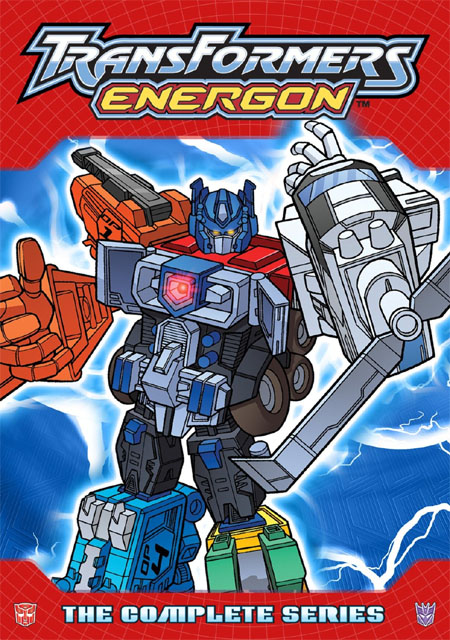 I’m sure that if you’re reading this you must at least know about the Transformers, heck they’ve been around since the 1980s, usually disguised as semi-trucks or Volkswagen beetles.   Over the years Transformers has gone from a simple battle between two factions of a sentient race of robots that could literally transform into electronic items and weapons into huge galactic battles over sentient beings, planets and even galaxies in some cases! Not only has the story evolved over the years but the animation style has as well, sometimes for the better though not always.

Transformers: Energon is the second installment in the Unicron Trilogy, succeeded by Transformers: Cybertron.  Transformers: Energon picks up where the previous Transformers: Armada left off, albeit a few years in the future.  The story continues with the introduction of “kicker”, our new protagonist who is the son of a scientist helping the Autobot faction of the Transformers        work on the impending energy crisis facing earth as well as the Transformers home planet of “Cybertron”.  Kicker has the amazing ability to sense “Energon” the energy crystals that can help save the two worlds problems.

The original allies of the Transformers: Armada series are still in the show, Brad is an undergrad under Kicker’s father, Alexis founded a world organization that lets Autobots cohabitate with humans, under disguise at least and Carlos became one of the operators of a space station orbiting Mars.  In the beginning Kicker is very much hateful of the Autobots due to his father using him as a tool through his life to search for the Energon reserves on scattered planets to help the Autobots and their home world.  I can’t blame the guy, if your dad find out you could sense oil tell me he wouldn’t use you as the world’s best dowsing rod?

Transformers: Energon is comprised of 52 episodes; it aired in the US from January 2004 to June 2005 and was well received for its straightforward and action-packed beginning, the opposite of the previous Armada series which for most fans started up incredibly slow and caused many viewers to give it up before if finally picked up its pace with the appearance of Unicron.  Some aspects of the show are resolved all too quickly; one example being the hate that Kicker has for the Autobots is completely gone by episode two with no explanation.  He still is true to his name as he kicks just about every single villain and his partner throughout the whole series.

The show does a decent job of incorporating some of the previous series characters and story lines into the latest adventure but other things are left totally unexplained and just given ignored.  One major example is demolisher, a Decepticon, starts to contemplate whether being the bad guy is really the path he wants to follow and then gets blown to pieces, He later gets resurrected using the power of Unicron but is left with every memory he ever had except the one where he was rethinking his life choices, convenient right? Another is the fact that Mini-Cons are almost totally nonexistent or even barely mentioned!  I for one thought the idea of the Mini-Con race that could super charge the Transformers was mind blowing, and then they get totally ignored! The weapon that every single person is trying to use in this show, aptly named the StarSaber, is made up no less than three of the Mini-Cons! I understand not wanting to have the same theme and such going on from one show to another but ignoring something so essential to the story is completely unacceptable.

The Transformers: Energon series uses a combination of cel-shading and 2D technology to animate the Transformers, sometimes with mixed results.  A few scenes come to mind where it looks especially strange such as when two Autobots transform into cars and drive away…in space, wheels spinning and everything.  A lot of the scenes where the big bulky characters are walking seem a little off as well, you see them kicking their legs and swinging their arms but it looks like it’s just the scenery moving behind them and not the characters actually walking.   On the other hand when all they used was cel-shading to animate a scene it looked spectacular with so many characters on screen moving so fluidly and really showing the potential they had when producing this show.  Part of the problem is that we received the version of the show before it was touched up for the original Japanese show which was actually named “Super Link” for its strong themes of teamwork and combining ones spirits to create a stronger force, aka the technique where two different Transformers combine to form one character with a single personality.

One of the most appealing aspects was the music that was used through the whole show was a mix of synthesized sounds and orchestra, which sounds strange but are strangely fitting to show case these epic battles.   Some episodes did sometimes use poorly timed musical themes but I blame editing for that and not the music itself.  It was also interesting to hear some robots that didn’t even have a mouth sound clearer than others who did have one that moved as they spoke; maybe that’s just an Autobot thing.  While the music itself was great the voice acting was sometimes very bad to the point that I couldn’t tell if the character had a question or was confused about what he just said, this was usually the IronHide character for some reason, sure his character was a big lug of a guy but that’s no reason to make him sound like one.  There were a few times when it would show a group of Terrorcon, the infantry used by the Decepticons, and suddenly a random line would be spouted with no indication of who even said it.  I also challenge someone to count how many “umms” were used just by the fifth episode!

While Transformers: Energon started off quite strong, it ultimately ended up being too slow to really finish out the series with the bang that’s expected of a 52 episode series.   I’m not saying it wasn’t enjoyable, anything with Transformers is enjoyable in my books, and in fact I was a huge fan of the Armada series that most people seem to dislike and greatly enjoyed the Series that followed this one as well.  Sure certain elements change with every incarnation but that’s the point right? They are Transformers after all.