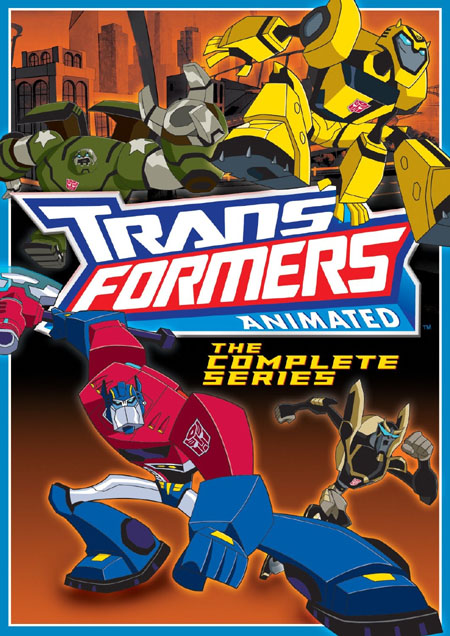 With the Transformers in the spotlight again it seems like a perfect time to release some more Robots in Disguise-y goodness with the release of one of my favorite installments in Hasbro’s 30 years of bringing us the Cybertronian giants. While the shows Gen 1, Beast Wars and Prime rate high on my list of Transformers media, I also like another iteration of everyone’s favorite robots. The show Transformers: Animated first aired in 2007 and caused a stir with its rather unique visual style though only lasted three seasons and left this fan and reviewer with questions unanswered. Well the wait is over at last as all three seasons and the 2-hour pilot are now available together with the release of Transformers Animated: The Complete Series on DVD.

Transformers: Animated follows the story of an Elite Guard academy washout Optimus Prime as he leads and commands a ragtag group of Autobots tasked with repairing Space Bridges. During a fateful job, Optimus, Ratchet, Bulkhead, Bumblebee and Prowl uncover the Allspark, a Cybertronian artifact of immense power, and end up stuck on Earth after being attacked by Decepticons. After being in stasis for 50 years in Lake Michigan, the Autobots wake up to a technologically advanced Motor City where they find an ally in 8-year old Sari Sumdac, the daughter of automaton genius Isaac Sumdac. The show features episodic story arcs much like Beast Wars though still contains an overarching storyline involving Megatron and the Decepticons throughout the seasons.

One of the biggest elements that I still enjoy about Transformers: Animated is that the Autobots don’t just face Decepticons every episode as there are technology fueled human villains to contend with like SloMo, Nanosec, Meltdown and The Headmaster which adds interesting elements to the show. This also shows that through their contact with Sari that they care for the safety of the human race from both robot and humankind. As much of a fan of the actual Transformers as I am I actually enjoyed the more human elements of the show particularly that of Sari Sumdac who goes from being a somewhat manipulative little brat to a more matured member of the Autobots team.

The Transformers Animated: The Complete Series contains 42 episodes in total though while most of the episodes were good there were several that still remain to be my favorites to this day. Season One sets up the groundwork for next two action packed seasons with a few of my favorite episodes include “Thrill of the Hunt” and “Along Came A Spider.” Both of these episodes in particular herald back to past generations of the Transformers. In “Thrill of the Hunt” we get to see Arcee as Ratchet tries to save her on the battle torn planet of Cybertron. Both are captured by the rogue Transformer known as Lockdown.

Lockdown, who treasures trophies taken from his captives, attempts to turn access codes over to Megatron. He takes a souvenir in the form of Ratchet’s EMP device and proceeds to relinquish Arcee of her information, but not before a struggle wipes Arcee’s memory clean. Both escape but Ratchet is left with scars and reminders of that day. He finally gets his revenge in this episode and takes back what is rightfully his.

“Along Came A Spider” takes place during Halloween and features the Decepticon Blackarachnia. Now anyone one that watched the Beast Wars series will remember Blackarachnia, the Predacon turned Maximal. This episode goes into her past a bit farther than before and reveals that she was once an AutoBot named Elita-1(from the Gen 1 days). Upon getting her infected with organic material she became the creature she is today, although she would do anything to rid herself of her “curse” as she puts it. She blames Optimus for her current condition and for abandoning her.

Much like the first season, one of my favorite second season episodes includes the return of Blackarachnia in “Black Friday”. Blackarachnia returns after her encounter with the Allspark and after busting Meltdown, from season one, out of prison thanks to the Dinobots, she persuades Optimus and Grimlock to work together to rob Powell Tower. The two recover the part, and Meltdown begins to remove the corrupted part of her being. Only Meltdown and Blackarachnia’s idea of corruption is far from the same. Blackarachnia is one of the show’s more complex characters as it’s obvious that she treads the line between her past and current ties.

In “A Bridge Too Close, Parts 1 & 2”, the Autobots must stop Megatron from activating the Space Bridge that would spell certain doom upon the planet Cybertron. The Autobots revive an old friend with the help of Sari to help battle the Starscream clones and Megatron’s unstable lackeys. Speaking of lackeys, the Starscream clones are absolutely hilarious when gathered together especially since they are a facet of his personality. In the final stages of the battle Sari is reunited with her father and Sari soon finds out something that will rock the foundation of her very life. The final reveal of the season originally shocked even me and paved the way to Season 3’s exciting developments which have never been seen in the franchise before.

The main reason for me wanting to check out The Transformers Animated: The Complete Series is that this is first time Season 3 has been made available to the public outside of its original airings. So if you missed out on the two part finale the first time you can see it here in this collection. Seeing the two-part episode “Endgame, Part 1 & 2” was definitively worth the wait though it still left many questions that I want answered but sadly a fourth season was wanted by the creators but just not in the cards to happen. Regardless of the outcome though Season 3 features a few other episodes that I loved as well including the “Transwarped, Parts 1,2 & 3” episodes which goes into details about Season 2’s huge reveal as well as provides major character development for the show’s major human presence, Sari Sumdac. That leaves “Five Servos of Doom” as my remaining favorite with focuses mainly on Prowl and his past and the return of Lockdown, the bounty hunter.

Throughout all three seasons of Transformers: Animated, the show has had a great bunch of writers bringing in classic characters and reference nods from a wide variety of Transformers lore into one show more any previous generation. You have obvious ones like Blackarachnia and Waspinator as well as a few visual and story references to Beast Wars. Then there are those referencing Gen 1 with characters like Elita-1, Arcee, Ironhide and Rodimus Prime as well as others that would make any Transformers proud. It’s nice to see a show reference the shows that came before it on a deeper level than pure passive reference like a robot on Cybertron looking exactly like Rattrap

One of Transformers: Animated’s most talked about subject is its visual style which outside of the original series it’s the only show to use traditional animation. The Transformers particularly those of the Autobots feature more human looking designs, which differs hugely from the better established straight lined robotic forms of past and present designs. It definitely was a bit off putting even for me at first but after a while I got used to it. Perhaps it’s because the head of Art Direction also helped create another favorite show of mine, Teen Titans.

One of my favorite areas of The Transformers Animated: The Complete Series is the voice work and sound effects heard throughout all three seasons. From a pure fan perspective, the creators had enough love of the source material to create a new iteration while paying homage to the shows of old. It’s worth mentioning that several voice actors from the original show and movie make a return to voice their respected roles as well as roles that came as a surprise including David Kaye portraying Optimus Prime instead of Megatron. Series veterans such as Corey Burton (Spike Witwicky) and Susan Blu (Arcee) return and well as Judd Nelson for his role as Rodimus Prime. It definitely helps that the Voice Direction was led by none other than Arcee herself, Susan Blu. It’s also interesting to note that several sounds including Megatron’s blaster is exactly the same as in the original show all of which is presented in English 2.0 Dolby Digital. There is also audio commentary tracks on several episodes for some inside info from the creators.