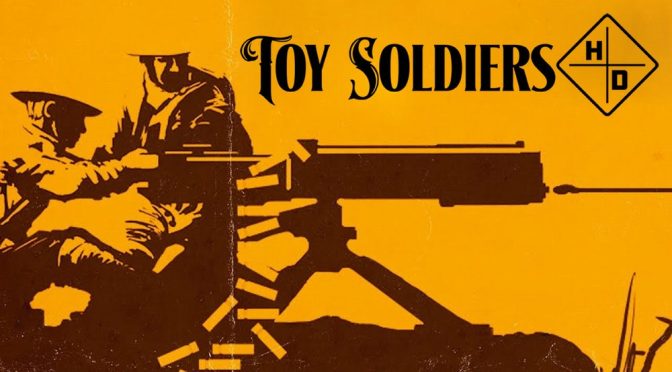 Toy Soldiers was originally released on the Xbox Live Arcade platform in March of 2010. The unique blend of 3rd person action, tower defense, airborne dogfights, armored vehicles, and top-down real-time strategy was acclaimed at the time and sold nearly 5 million copies. Fast forward 11 years and the quirky World War One game is looking to attract a new generation of gamers by releasing an HD version. Likewise, it includes the two DLC packs, The Kaiser’s Battle and Invasion! Faithful to its origins, the following review was played on the Xbox Series X and Xbox Series S. At the time of writing, the current price is $30 to jump into the trenches once more.

Toy Soldiers HD was developed by the original studio, Signal Studios, and published by Accelerate Games. The Seattle-based studio was the original developer of the 2010 success and I was excited about what they could do given how much more powerful both online infrastructure and hardware have become. I recall playing this back in 2011 and loving how replayable each skirmish was, due to how many different variables were at your fingertips. 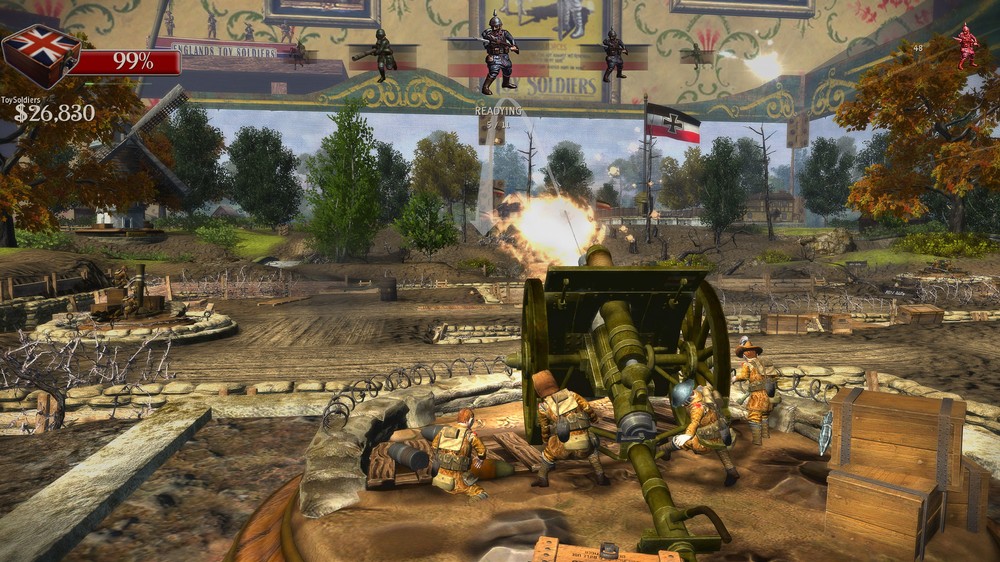 From the moment you fire up Toy Soldiers HD you can see and feel that this is a raw port through and through. The loveably, cheesy vintage song plays and classic oversaturated colors of lead-based paint and miniature models fill the screen as you’d expect. The game is as charming as ever, but as you load into the first campaign mission, the novelty wears off.

You will command one side of a world WWI conflict where your opponent will rush at you in waves. As expected your defenses will be tested more and more as the waves continue. Some missions have a different variety like boss battles the farther you get into the campaign, but the premise stays the same. You switch between a top-down god view to a 3rd person action game to eliminate the enemy forces and achieve victory. You are in control of placing battlements, defensive equipment like barbed wire and calling in various strikes from your top-down view. However, when you zoom into an encampment like a machine turret you’ll aim and mow down the enemy cavalry and infantry as they attempt to overrun your position. Each kill earns you more money that you can use to purchase new ordinance, upgrade your encampments, repair damaged equipment, and more. I typically am too bullish in these types of games and end up painting myself into a corner regularly. For this reason, I played on easy and thought it was a good balance for my play style. 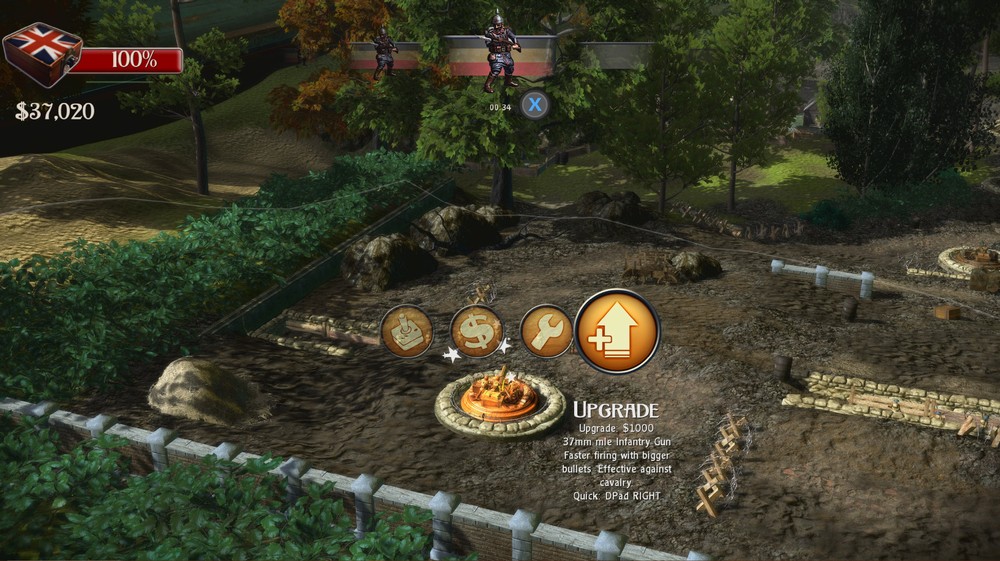 Jumping into the single-player campaign reminded me how much more I expect to be onboarded by a game’s initial tutorial.  It’s not to say that the first few hours of the game aren’t curated enough, but it does stand out as a bit more obtuse of an interface than we’re used to today. Today’s game landscape of remakes, remastered and reimagining muddy the water for consumers as to what distinguishes the level of quality attached to a dollar value. In this case, with a $30 asking price, I’d expect more than just a port. Furthermore, I had anticipated the game to look and run much better than what I saw with the title of “HD.”

Everyone has played a bad game in high fidelity; likewise, we’ve all loved low-resolution gems that are just fun to play. Sadly, Toy Soldiers HD lies somewhere in between. The same fun, I felt in 2010 was there. I thought about how I could jump from one end of the battlefield to the other in order to counter an offensive. However, the game’s fidelity and resolution were so antiquated at this point, that it was very distracting and didn’t meet my expectations of what $30 should buy you as a consumer. Every game doesn’t need 4k, HDR, 120FPS, and ray-tracing. However, every game’s visual presentation should complement the gameplay. In this case, I didn’t think the “High Definition” was present in the package and the muddy polygons running at me weren’t as charming as they once were. 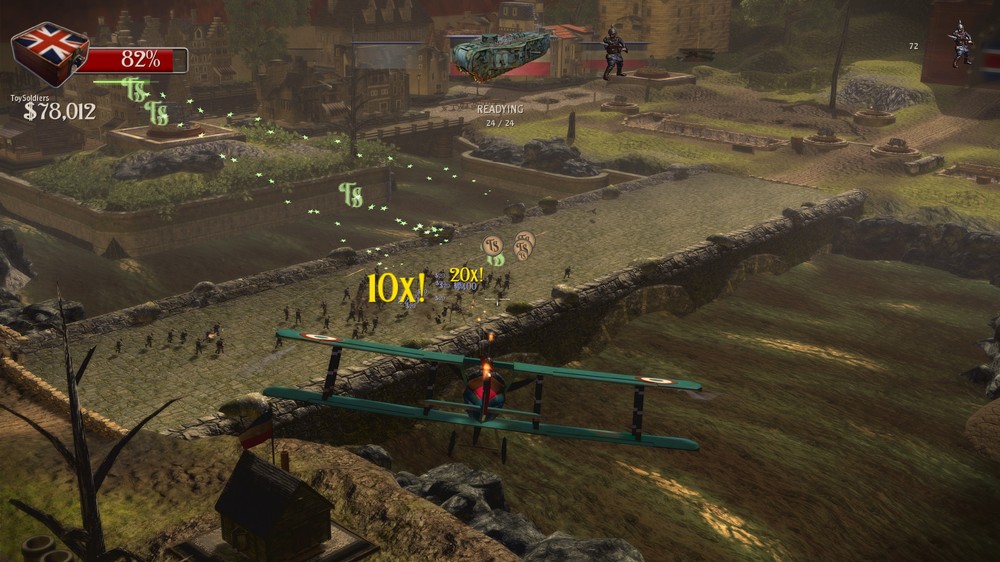 Another disappointment was when I tried to test the online gameplay. At the time of review and running the latest version available, I could not join or host an online session. My collaborating reviewer was on an Xbox Series S and said he was able to get into an online session, however on my Series X, I was unable to join him. After an hour of reinstalling, restarting, and refreshing I am afraid I have to report that I was unable to test the multiplayer aspect of the game due to the game’s technical faults.

I wanted to like Toy Soldiers HD. Every time I started having fun though, something about the visuals or tedious exposition pushed me away. The multiplayer not functioning for me is so disappointing when this original game was one of the early showpieces of how online multiplayer can create infinite replay-ability given the right support. In the end, I have to advise that only the most hardcore fans shell out the asking price to march into these trenches. I have to raise the white flag and say wait for a deep sale if you’re at all interested.