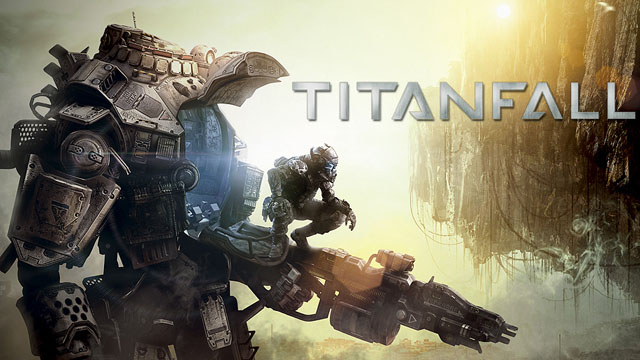 After spending 20+ hours with the Titanfall beta I’ve managed to compile a few thoughts.   Titanfall is the long-awaited and much-anticipated debut release from Respawn Entertainment made up of the core guys from Infinity Ward who basically created the mold for modern day FPS games and online shooters.  Needless to say, expectations are high.

As Call of Duty found its niche over the years as the eSports version of military shooters most of the franchise’s fans drifted away from the single-player campaign mode in each new installment; some diving into the online multiplayer and never even sampling the story.  Respawn took a cue from that trend and decided to make Titanfall an online-multiplayer game only, save the 20 minute multipart tutorial you’ll want to sample before headed into the fray.   Only time will tell if that decision pays off, or if Respawn will be scrambling to offer some sort of story-based DLC in the future.

Titanfall takes two things that gamers love; military shooters and giant robots, and combines them in such a way that the resulting hybrid is easily one of the most inventive and exhilarating online shooters I’ve played since the original Black Ops; and that’s just my takeaway from the very limited beta content.   In this initial sampling we are only given a small selection of weapons and gear, and only a single body type when it comes to our titan shell.  There are a few preset loadouts as well as custom loadouts you can configure tailored to your play style or game mode, of which there are only three at present. 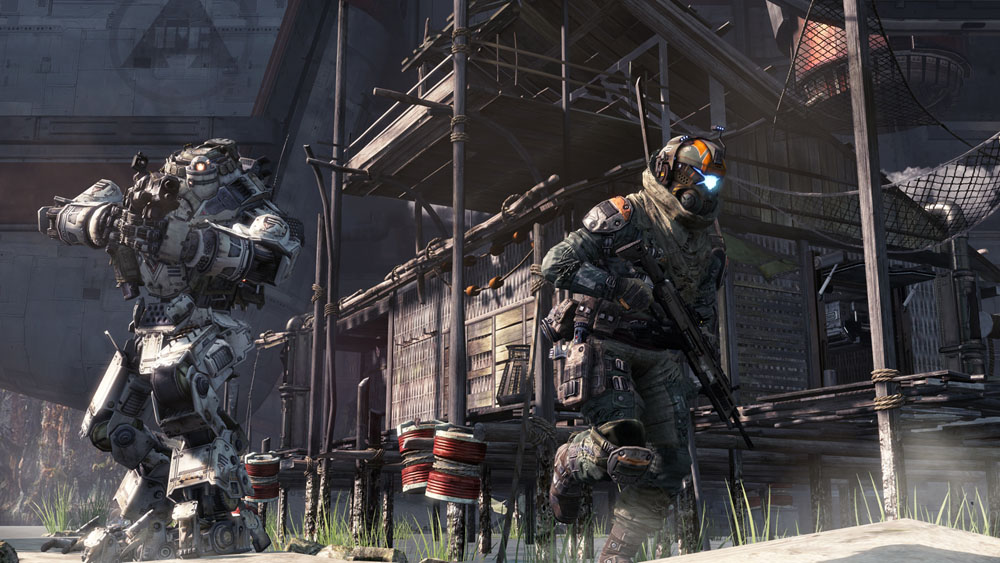 Attrition is your team deathmatch, the classic red vs. blue chaos, while Hardpoint is the slightly more strategic domination mode where you battle to control three spots on the map and get in your fair share of team kills.  And then you have Last Titan Standing’ obviously a clone of Last Man Standing only everyone starts in a titan and the last one remaining wins the round.  I’m not sure if or how much these modes are going to be tweaked before final release, but some have a few issues.   At this time Attrition is probably the most balanced simply because it’s designed as a free-for-all.  Admittedly, the team that works together and “communicates” will have a tremendous advantage, but strangers never want to strategize or even chat during the game – something critical in Hardpoint.

Titanfall’s 6-vs-6 multiplayer was initially criticized for being too small but there are some underlying mechanics that make these battles seem much larger than they really are.  Throughout the match the game will be dropping in minions; AI fodder that provide a bit of distraction from the pure pilot-on-pilot chaos, and also help fill your XP meter with slightly easier kills.  And then you have the titans.  Despite being instructed in the tutorial how these titans are fully functional in auto-pilot, players seem determined to jump right into their robot the moment it lands when in reality, a team of six, all with automated titans is now a team of twelve.   Automated titans are also great guards for hard points, especially hard points housed inside buildings large enough for a titan, and they make a great diversion to draw enemy fire while you snipe enemy pilots from the comfort and safety of a distant perch.

Gameflow in the beta is fast and continuous.  You are given ample time to tweak your loadout before bailing out the back of your dropship.   Then for the next 8-10 minutes you are locked into exciting combat, first as a human pilot with standard two-weapon loadout plus grenade, some tactical abilities, and some slick parkour moves that will have you running along walls and jet-jumping to high ledges, and eventually as a pilot of your massive titan.   There is a two-minute prep time between titanfalls, which can be accelerated by performing well on the battlefield or using Burn Cards.  The narrator will be giving you constant updates down to the seconds before you titan can be summoned at which point the carnage grow exponentially. 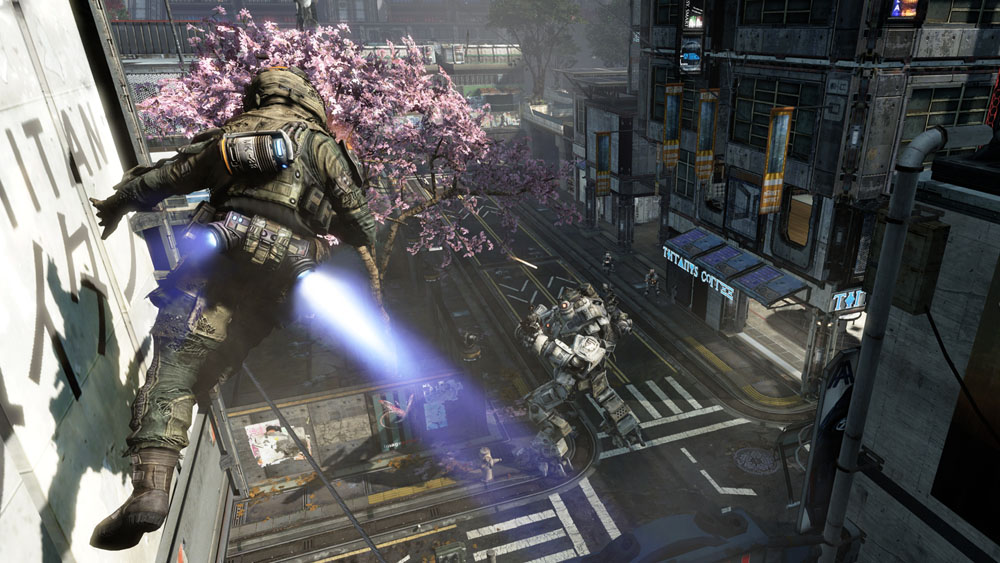 The two included maps provide plenty of unique design challenges.  One map is primarily wide-open battle-scarred terrain perfect for rampaging titans with a few scattered ruins for indoor close-quarter tactics for pilots waiting on their titans.    The city map provides more of an urban sprawl with multi-level buildings great for sniping or chipping away at titan armor and shields with your anti-titan weapons.  Despite the lack of any visual cues, the pilot parkour seems to flow quite naturally once you get the rhythm of the jet-jumps and wall runs  making for some exciting and lethal interactions that make excellent use of the environments.

Titans are brutes, armed with two customizable weapons and two tactical skills.  They cannot jump, fly, or hover but they do have dash jets that can be used to dart around the battlefield before having to cool down.  Titans also have a shield they can temporarily generate that will magnetically collect any incoming fire and repel it back toward the shooter – a great tactic if you can nail the timing.  As mentioned before, titans are fully functional, albeit less effective, in their unmanned autopilot that you can toggle between “guard” and “follow” modes, essentially using your titan as a stationary turret to defend a hard point or a roving bodyguard to defend you. 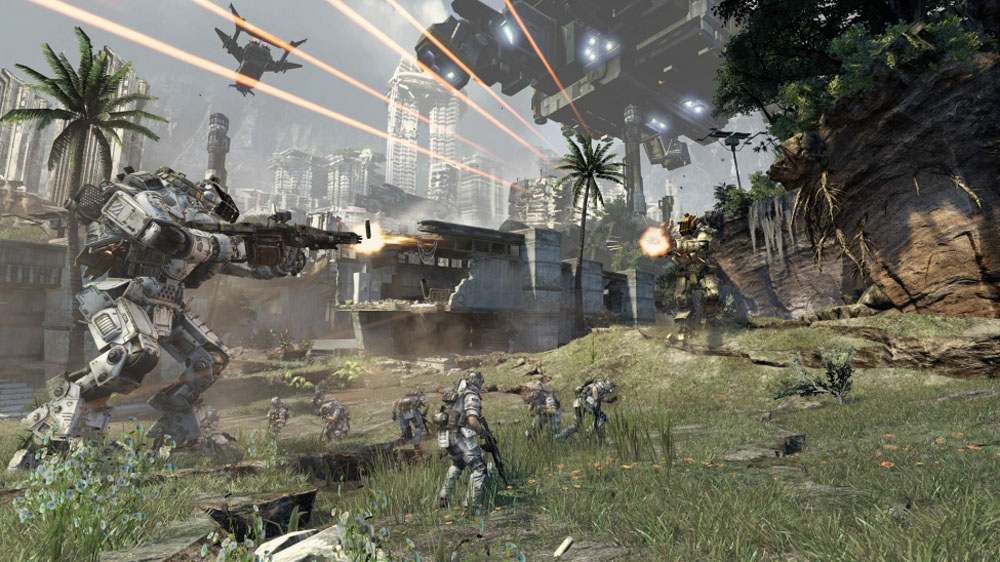 The more you play and fight the more XP you earn and as you start to level up through the ranks more and more weapons, customizations, and gear become available; everything from a cool auto-lock smart pistol that can hit four targets at once to a deadly sniper rifle great for long distance kills.  Also, depending on your performance you will be awarded with Burn Cards.  These are temporary modifiers that you can pre-assign before each match, choosing up to three after all slots are unlocked.  You can then trigger these cards during combat for various statistical tweaks, bonuses, or even temporary weapon swaps.  There is even a card to shave your titan spawn time by a third, potentially giving you a 40 second advantage to get your titan on the battlefield first.  There is also a massive assortment of ongoing challenges that you will slowly check off your list the more you play and perform well in battle.

I was definitely impressed with the performance and stability of the game on the Xbox One.  In the 20+ hours I played there was only one session hiccup and the server migrated within three seconds before the battle resume.  The graphics are stunning; truly next-gen with great models, texture detail, and fluid animation and framerate, but the sound is what really sells the experience.   This is one of those games you really want to crank up to appreciate the powerful weapons and explosions, the thumping titans as they stomp around the battlefield, and all the chaos of these epic battles.  Titanfall is easily one of the best-sounding games I’ve played on the Xbox One, even in beta form. 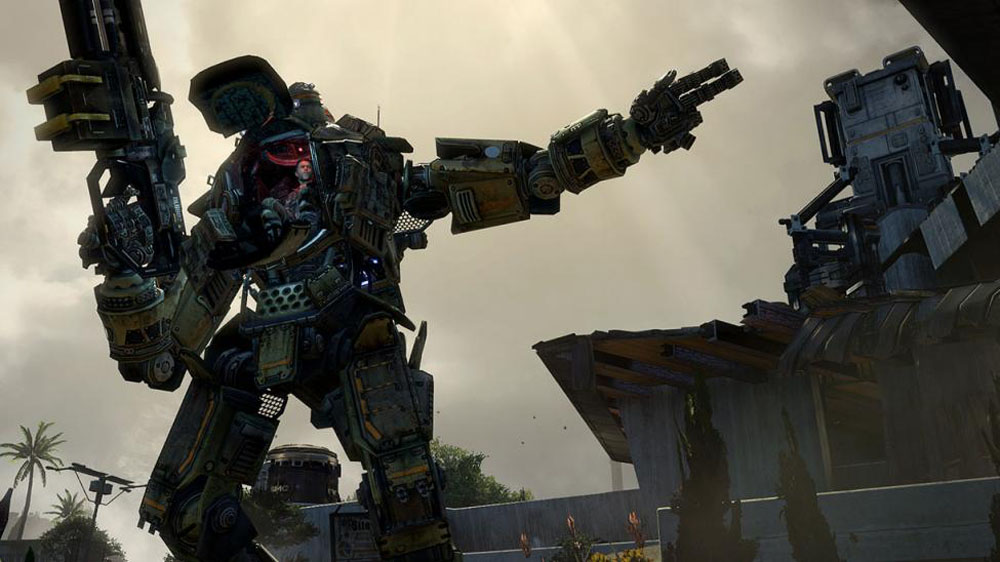 Respawn has a lot of great ideas and this game is a pure joy to play thanks to its fantastic non-stop pacing and ever-changing battlefield dynamics that mixes human and AI soldiers with frightfully deadly titans.   There is this Epilogue moment at the end of each battle where the losing team must retreat to their dropship while the winners try to stop them by either killing their defeated foes or blowing up the dropship.  It has nothing to do with the outcome of the main game – it’s just this awesome little thirty second challenge for bonus XP and bragging rights.

But without any arcing narrative or story mode to setup the universe all of these ten-minute game sessions seem a bit detached and the game starts to feel like an XP/level grind after 8-10 hours.   Such a design means that content is king and Respawn had hopefully better deliver a generous selection of maps and a ton of content that is strategically spread out across tiered levels to keep people interested in playing their game longer than a few weeks.

After a couple days and some marathon sessions of the Titanfall beta I look forward to seeing how more content is going to expand the life and overall appeal of this title when it releases on March 11.  There is a solid foundation for a new addictive franchise here, but without a story mode to at least guarantee an 8-10 hour commitment I’m not ready to call Titanfall the Call of Duty or Halo killer game of the next generation just yet.