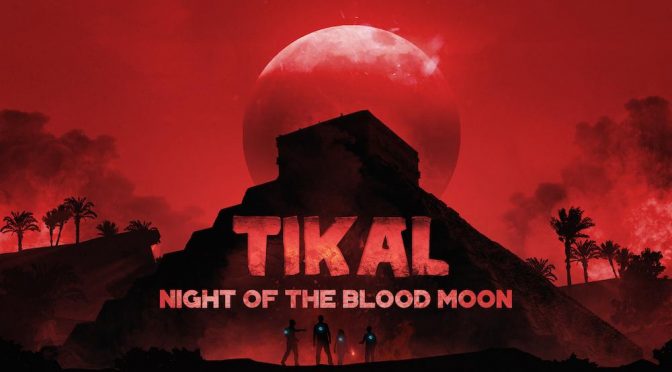 Swiss composer and sound designer Jakob Eisenbach (Patient Zero, Temple of the Diamond Skull), in partnership with TRUEVR Systems, a world-leading developer of location-based virtual reality (LBVR) game experiences, releases the original soundtrack to TIKAL: NIGHT OF THE BLOOD MOON on August 19th. Now available at VR locations in North America and Europe, TIKAL: NIGHT OF THE BLOOD MOON is a full-body VR arcade experience utilizing motion capture, physical props and 4D effects to teleport players into an ancient Mayan temple where you and your team are dispatched to stop the awakening of evil in the shadow of the blood moon. TRUEVR’s most sophisticated experience to date and setting a new benchmark for the LBVR industry, Eisenbach’s original musical score was recorded with a full symphony orchestra and choir in Budapest, Hungary. Watch behind-the-scenes with composer Jakob Eisenbach and the Budapest Art Orchestra at https://bit.ly/3rBS4rh and download or stream the soundtrack album at https://bit.ly/36ZG6y4.

“TIKAL is a one-of-a-kind virtual reality experience that takes place during a long prophecised event in an ancient temple of the tikal,” explains Eisenbach. “The focus and aesthetics demanded huge dimensions: especially in the vertical dimension, since this can only be achieved in a VR environment. Musically we needed to tell this story with an epic-sized orchestra, which I pushed to have recorded live and TRUEVR felt the same way. Inspirations for this epic journey were the symphonies of Anton Bruckner, the orchestration finesse of Franz Schrecker, the massive power of Carl Orff’s ‘Carmina Burana’ and a very important touch of simplicity to not overwhelm players while immersed in the game.”

As composer and sound designer for TRUEVR Systems, Eisenbach has also created soundtracks for other best-in-class location-based VR experiences such as Patient Zero, The Cube, Biohazard, and Temple of the Diamond Skull. For more information, visit https://www.jakobeisenbach.com.

“TIKAL was always planned to become our flagship experience from the very beginning,” commented TRUEVR Systems CEO and Producer, Philip Lacoste. “Therefore, it was clear to us that in addition to creating a stunning level of visual detail, the music needed to be beyond the highest standards that any location-based VR experience has done before. The score was crafted accordingly by our composer and sound designer Jakob Eisenbach. To bring real emotions to this one-of-a-kind experience, we knew the score had to be recorded live with a full symphony orchestra and choir. The results that Jakob achieved with the Budapest Art Orchestra not only brought the heart and soul into the game, but we truly believe this level of quality is unparalleled in the LBVR industry.”