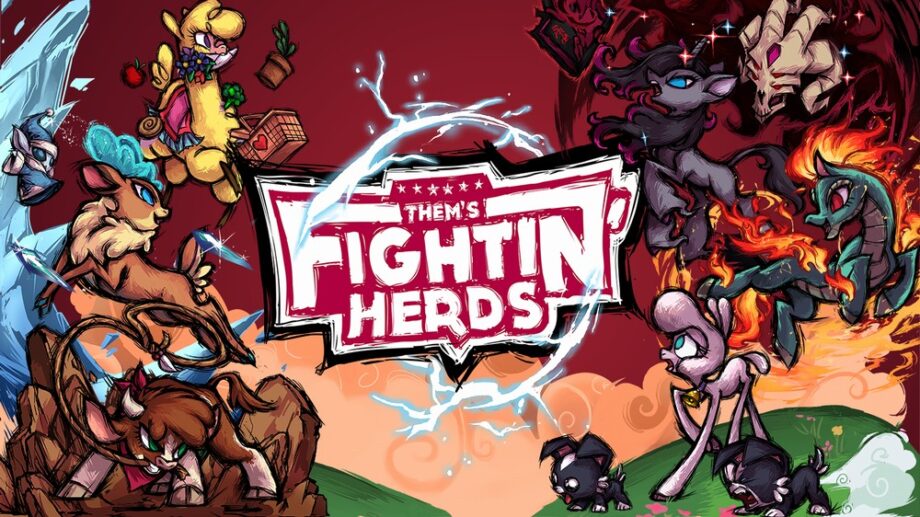 I had heard talk about the “Bronie” culture over the years and thought it to be more a case of internet trolling than an actual belief or infatuation – you know, like Flat Earth Society, Flying Spaghetti Monster, etc. But now that I have had a chance to experience a little bit of the Bronie world in playing a bit of the newest release from Mane6 and Maximum Games called Them’s Fightin’ Herds, I guess I can somewhat see the appeal that these cute characters might have.  Especially as bad ass as they are here.

With its early beginnings as an indie fighting game Fighting is Magic that was set in the universe of the popular animated series My Little Pony: Friendship is Magic. Development of Fighting is Magic was halted in 2012 upon threats of legal action issued by Hasbro, owners of the My Little Pony intellectual property. This came as a disheartening blow to developers Mane6, who were obviously big fans of the franchise – but rather than scrap the project altogether, Mane6 removed all the My Little Pony references from their game and continued on with their work. 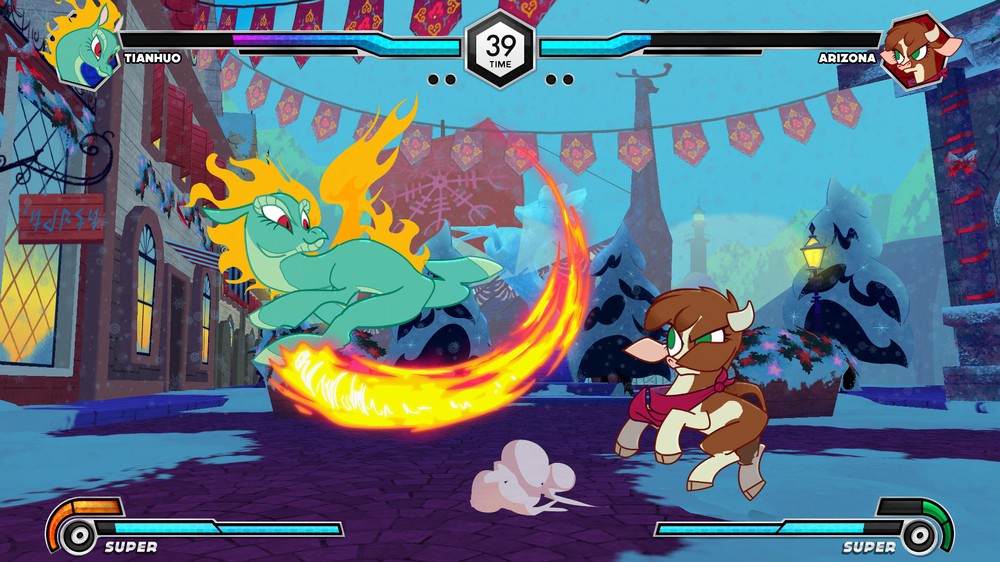 In a strange turn of events, Lauren Faust, the creator of the My Little Pony: Friendship is Magic animated series, approached Mane6 and offered to assist in character and story design for the now non-Pony project.  Lauren Faust also happens to be the wife and frequent collaborator of animator Craig McCracken – the two of them having worked together on Craig’s iconic The Powerpuff Girls and Foster’s Home for Imaginary Friends franchises – so Faust offering help to this fledgling project was a huge deal for the folks at Mane6.

With Faust’s’ input, Fighting is Magic quickly evolved from a straight-up Fighter Maker 2D based fighting game to Them’s Fighting’ Herds; an impressive gameplay experience that weaves traditional 2D fighting deep within a classic quest-based adventure in what plays out like a hybrid of the original versions of Street Fighter and the Legend of Zelda. 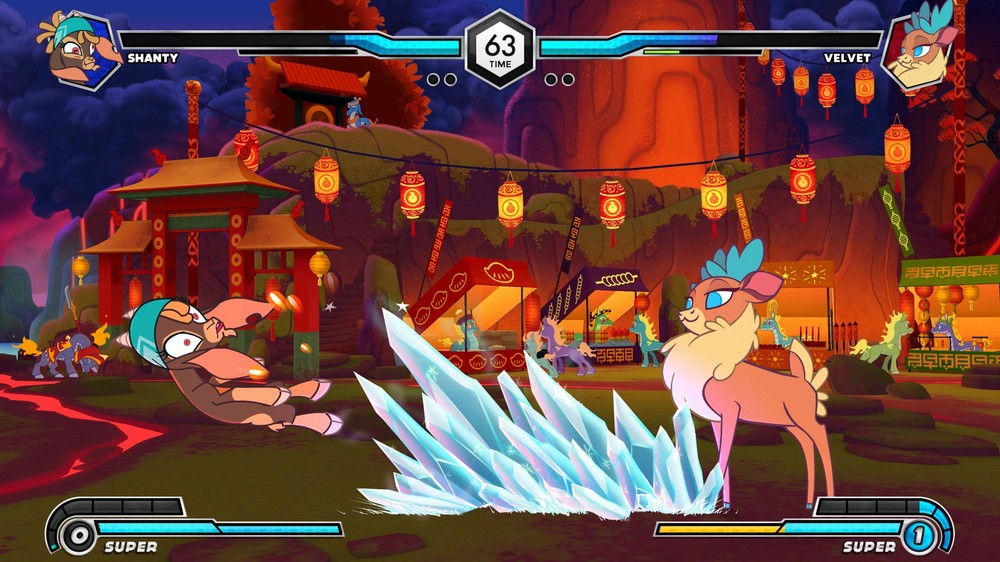 Reviewing the paragraphs above, I have mentioned the word “Pony” six times already – but due to the aforementioned legal action, there is not a single pony to be found in Them’s Fightin’ Herds.  Instead, gamers are presented with interesting cast of alternative fauna with which gamers can commence battle; Arizona the cow, Velvet the reindeer, Paprika the alpaca, Oleander the unicorn, Pom the sheep, Shanty the goat, and Tianhuo the longma (a mythical Pegasus-dragon hybrid) – each representing a specific region (prairie, tundra, highlands, etc.) of a mythical world called Fœnum.

The Fœnum tribes, or herds, have existed in peace ever since the carnivorous beasts known as the Predators had been locked away in an alternate realm.  But the Predators have escaped their imprisonment and returned to threaten the safety of all the peaceful creatures of Fœnum.  In an effort to protect Fœnum, each tribe sends its top champion (a Key Seeker) on a quest to become the champion (the Key Keeper), locking the Predators away forever and renewing peace in the land of Fœnum. 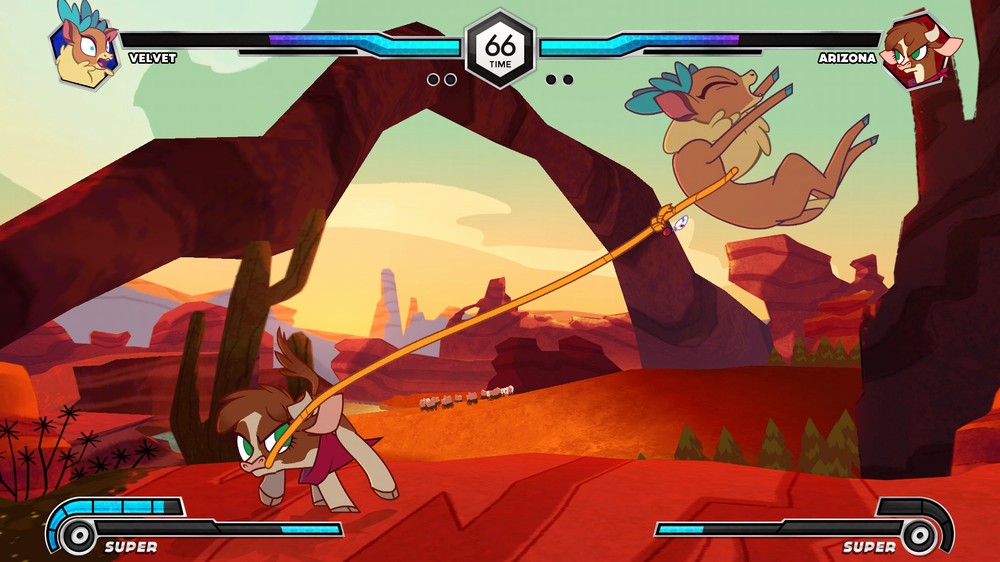 The adventure portion of the game starts with our initial heroine Arizona the cow, as she sets off from the prairie with her sights set on Reine City.  The overall look is classic 2D sprite-based overhead adventure like the classic Zelda games, interspersed with side-scrolling platform stages that help introduce gamers to the gameplay mechanics used in the game.  It’s in one of the first or second of these stages that gamers learn that THF might look cute and all, but it is not one to go easy on the gamer.  With an emphasis on precision combo-key timing, getting across even the most basic platforming sections can be brutal.

As the gamer navigates their way through Fœnum, they happen upon other Key Seekers along the way.  These Key Seekers are like bosses of their region and will challenge the gamer to a battle in the form of a classic 2D four-button fighter.  Again, the name of the game is precision and timing, as these Key Seekers don’t go down easy on any difficulty level. 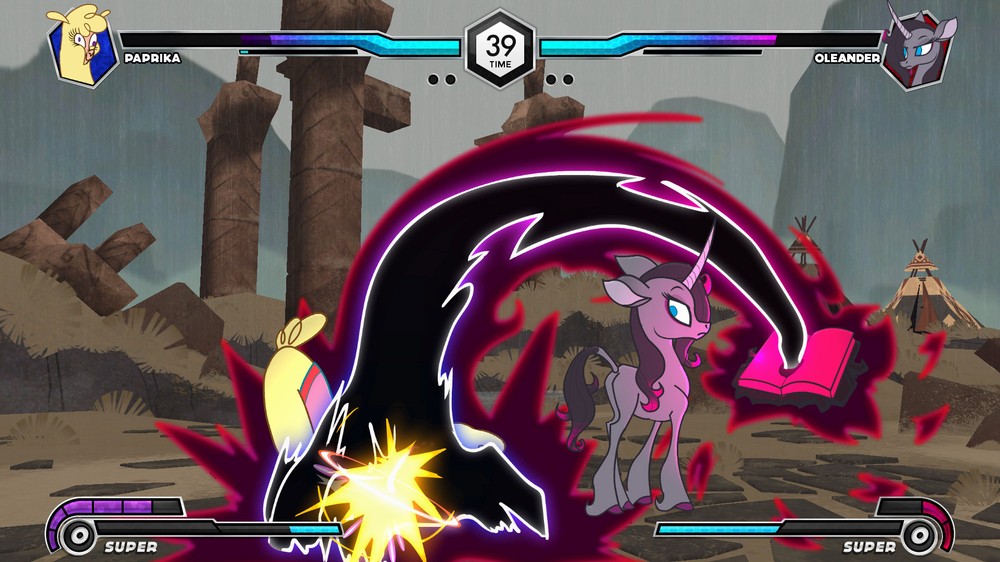 I say classic fighter, but there’s nothing classic about witnessing four-legged creatures in a full-on martial arts battle – but Them’s Fightin’ Herds pulls it off well.  The original Fighter Maker 2D engine was replaced with Lab Zero’s Z-Engine, which allowed them to deliver a believable set of attacks and defenses based on a four-legged stance, as well as a deep set of magic attacks for each character.  Thankfully the control scheme is pretty much standard across the characters, so switching between characters does not require a great deal of learning, but really mastering all of the magic moves will take some patience.

Them’s Fightin’ Herds offers up a unique online experience combining the look and feel of the game’s 2D story mode into the active lobby resulting in an experience reminiscent of those early online worlds like Webkinz or Club Penguin. Players are allowed to roam the massive “Pixel Lobby” in search of hidden loot and/or challenge other gamers to battle for prizes. The game uses the GGPO online engine to deliver a nearly lagless online fighting experience, and even offers crossplay functionality. 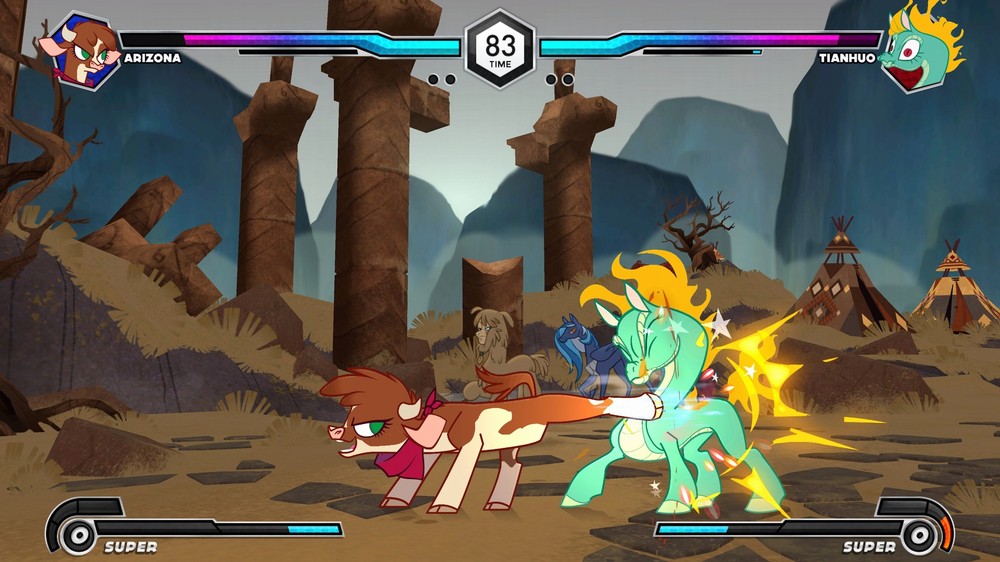 I cannot say enough about the overall presentation level which is by far some of the best you will find in a game of this ilk.  In terms of character design and animations, 2D fighting does not get much better than Them’s Fightin’ Herds.  But when you throw in excellent voice acting and Mane6’s trademark Dynamic Music System – which seamlessly customizes the hard rocking music soundtrack to match the online action – Them’s Fightin’ Herds is an amazing audio-visual experience.

The only real issue I had with Them’s Fightin’ Herds is the difficulty level – it is a very difficult game to master even on normal difficulty.  Whether it’s jumping some of the more precarious platforms in the story mode, or battling against the CPU challengers, Them’s Fightin’ Herds is not a walk in the park.  And while this definitely adds value to the 5 or so hours of gameplay in the story mode; there were points sticking where couldn’t determine if the issue lay with me, or with some disconnect in the mechanics from porting to the PS4. 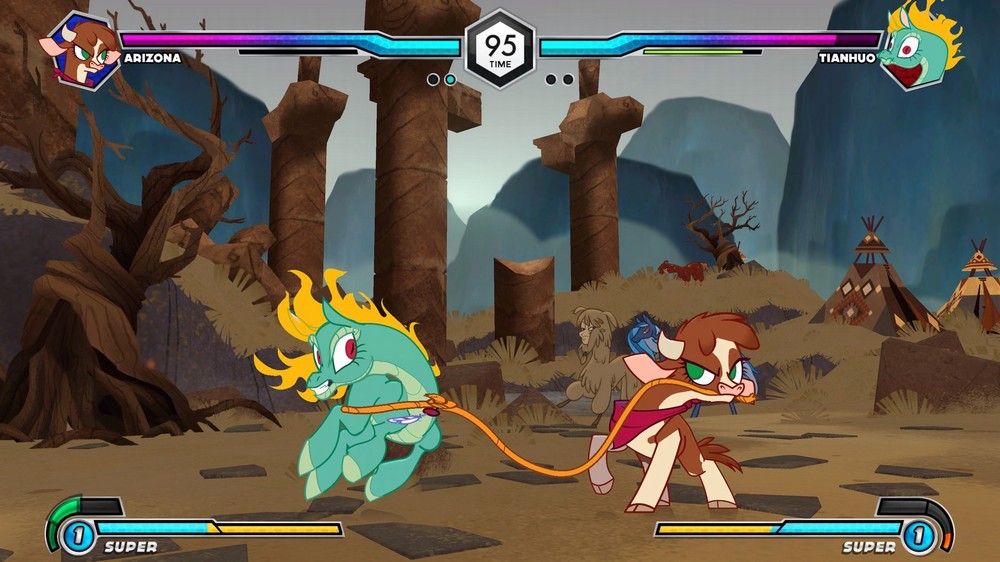 Regardless, for a game I would have normally looked over as being too cute, too kid-like, or too plain weird – I really enjoyed my experience with Them’s Fightin’ Herds – and if you are a fan of 2D fighting games with solid mechanics and a great story… I think you will enjoy it as well.