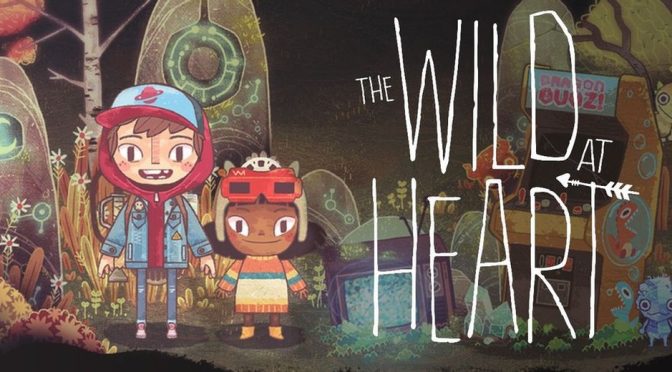 As a fan of the Pikmon franchise, I felt at home playing The Wild at Heart. The Wild at Heart is a truly enticing successor to Pikmon if there was ever need of. The art style feels like you have entered a children’s book and looks fantastic. Between the hand drawn environments, characters, and enemies The game does not rely solely on the art style as the gameplay is outstanding as you use your knowledge to solve the puzzles of the forest. The story is engaging with plenty of content to find throughout the world. 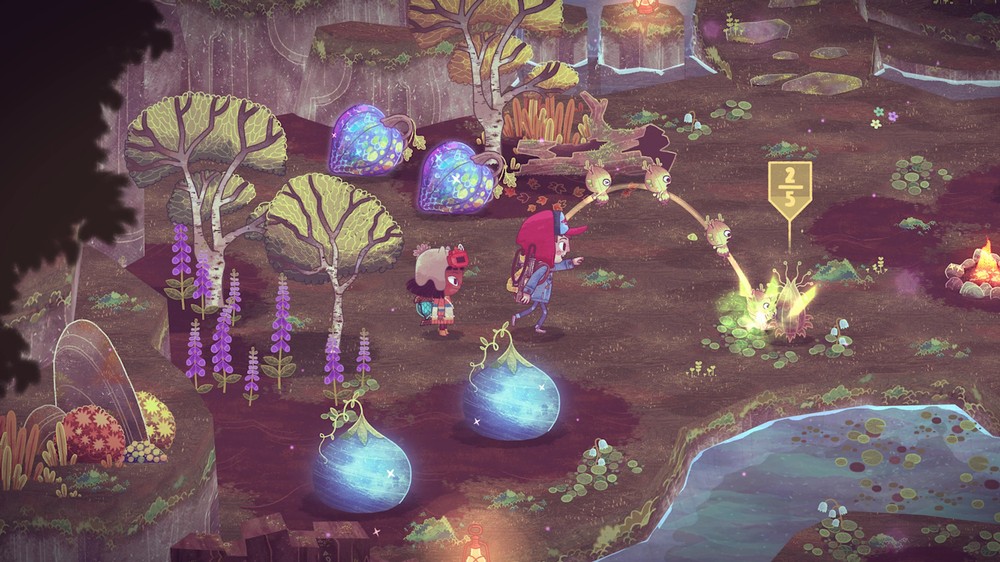 You play as Wake, a young boy who decides to run away from home. He gathers up supplies for his escape like his trusty handheld game console, PB & J sandwich, and homemade vacuum. He heads off to the woods and follows the map he made where he is supposed to meet his best friend, Kirby, so that they can both leave their troubled childhoods behind. He gets lost however and ends up in a very deep part of the woods where he discovers a weird creature who he follows deeper into the woods. Once Wake gets deeper, he finds a group of people who are trying to contain an ancient evil called The Never. This group of guardians need Wake’s help gathering all their lost friends in the Woods. 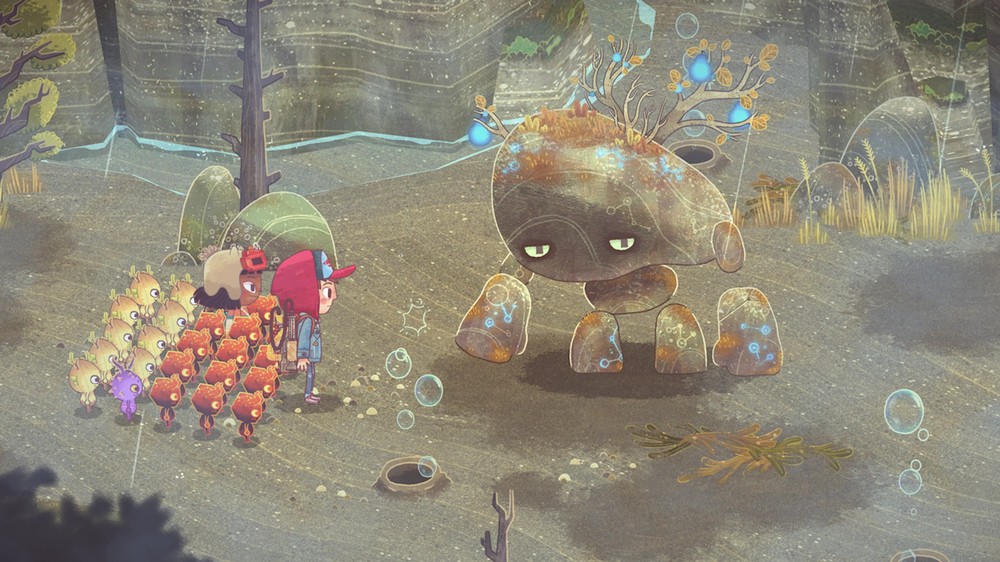 Exploring the woods is not done alone though as you befriend forest creatures called spritelings. These little ones follow you around and can complete all sorts of tasks like build bridges, move massive stones that are blocking paths, as well as fighting against hostile enemies. As you go deeper into the woods, you find different types of spritelings that will be useful in different situations. It is simple and quick to switch between the different types too. As you gain access to different types of spritelings and increase the number that can follow you around, you’ll uncover new pathways and hidden secrets. It’s a real joy to explore all the different areas of the forest and try to find every hidden item.

Once Wake finally reunites with his friend Kirby, you’ll be able to switch between the two of them and have them move around the forest separately. Kirby can squeeze through small tunnels and access areas that Wake can’t reach, whereas Wake can use his homemade vacuum device to activate wind spinners and suck things towards himself. The puzzles start out simple but then gradually become more and more complicated as the game progresses. You’ll find yourself revisiting some areas as you try to complete some of the puzzles or find your next course of action, but it never starts to feel repetitive. 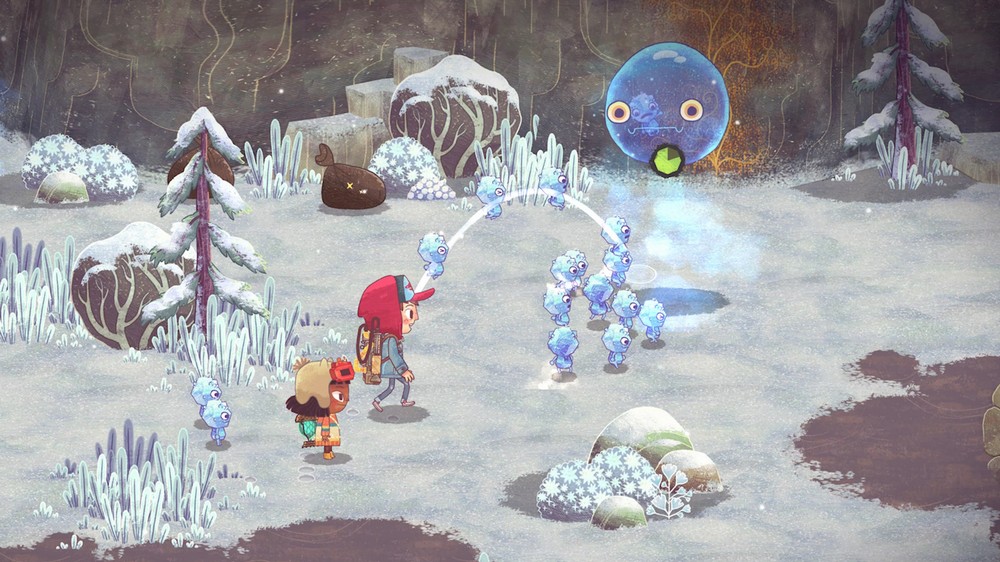 There is a day/night mechanic that changes the environment at night causing it to be more dangerous to travel. Never creatures will come out and start to attack you and your little spritelings forcing you to retreat and safely wait out the night at camp.

In the beginning, it can feel as if night comes way to quickly and force you to make split decisions last minute. I would be exploring new areas and would have to retreat to camp due to being low in health or need more items for healing. On the other hand, there are a lot of useful things to do at your campsites. At camp, you can craft new items using the scrap and materials you’ve found as well as hatch new spritelings to join you. Camping for the night restores you back to full health. It also lets you see into Wake and Kirby’s dreams. These dreams show you more about their lives before the deep woods. This helps build onto the narrative and help you understand and relate to the two protagonists. There are plenty of other things to do when you aren’t exploring or fighting the Never. From completing bounties and finding cats, there is always something to do in this magical world. 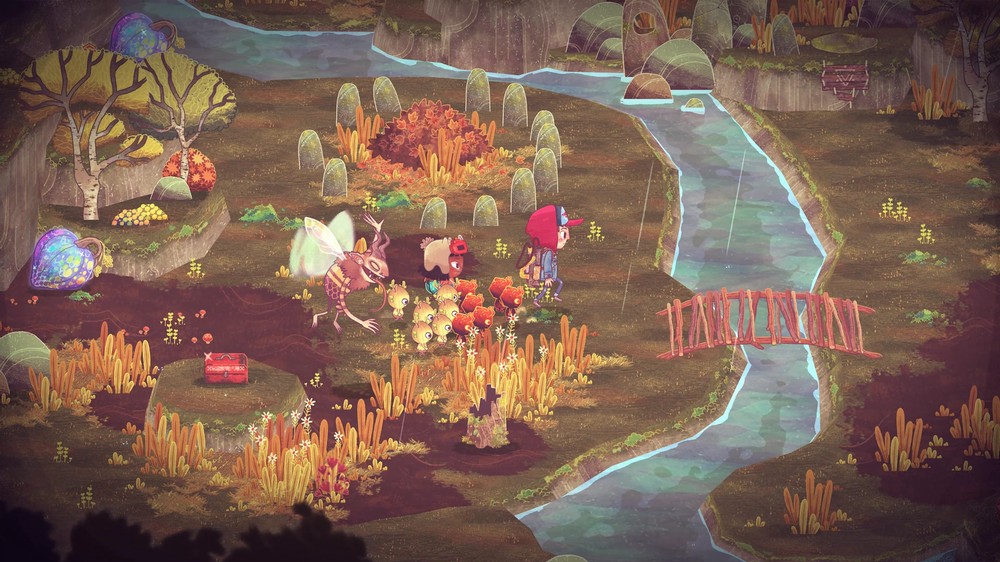 The Wild at Heart is a magical and well-designed game. With its enchanting music and gorgeous hand drawn environments to explore, it’s a beautiful adventure that will keep tranced until the end. Using spritelings to solve puzzles and fight on your behalf is a fun gameplay mechanic and adds lots of interesting dynamics to the puzzles. The Wild at Heart is a fantastic game and deserves to be bought and played!