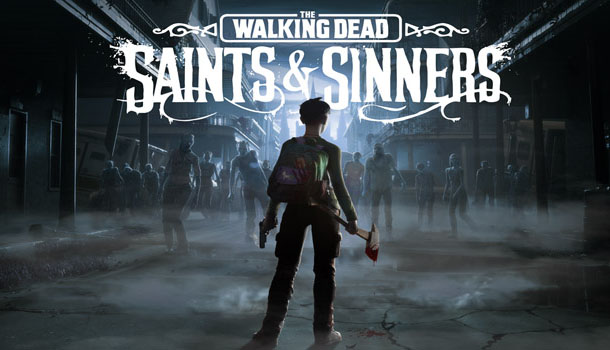 I have played a lot of survival games. A lot. And one thing that has always felt a little less-than-satisfying is melee combat. But, the first time that you take a rusty shiv and plunge it into the eyeball of an approaching zombie whose arms are flailing and teeth are chomping for you, and then you see that the shiv has gotten stuck in the skull, but the zombie is still coming at you so you have to shove harder against the blade to get it to pierce the skull and actually damage the brain…wow. And then, the knife is stuck inside the now-limp corpse of this bloody zombie, covering your hands and forearms with gore, so you reach out with your free hand and grab the zombie by the hair and push-pull the blade out of the head and toss the corpse aside, only to see three more moaning undead coming for you, knowing that your knife is damaged and probably won’t last through another fight. This is the kind of melee combat that you can expect from The Walking Dead: Saints and Sinners. It is brutal, terrifying, and gory.

Each kill feels like a challenge. There is a technique to it. I’ve lunged at zombies with my knife only to watch the blade skitter off the side of their head, leaving me exposed to their relentless attack. I’ve seen my knife hit them in the jaw or the neck, not hitting the all-important brain, forcing me to have to remove the weapon from a still-biting zombie, or abandon it entirely, leaving it sticking out of their body as they come at me, hungry for my flesh. 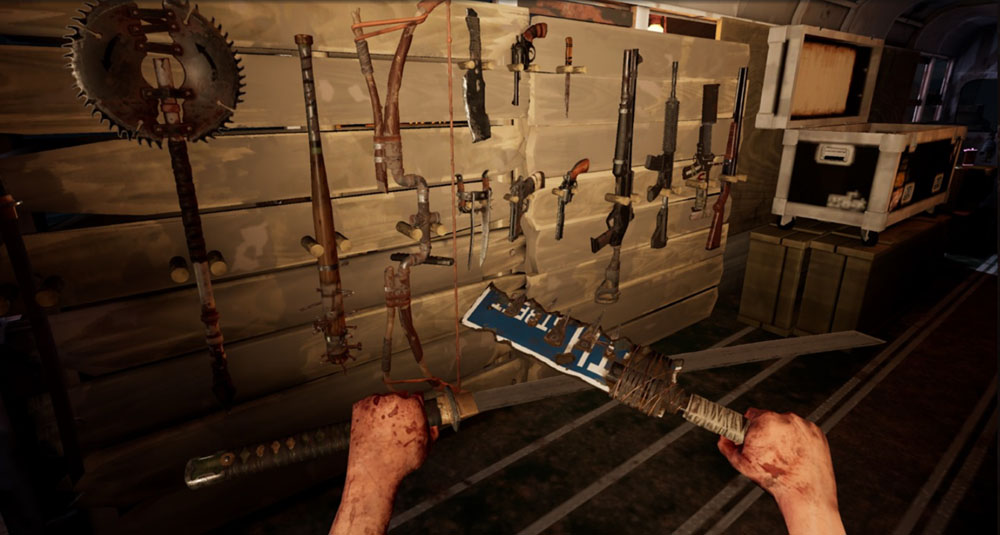 And then, on top of worrying about properly disposing of the ever-increasing hordes of zombies roaming the streets of New Orleans, you also have to worry about your health, your hunger, what time of day it is…and the bells. Oh god, the bells. Once a day, the bells ring in flooded New Orleans. And when that happens, you better hope you’re not wandering the streets. Droves of zombies will come out at that point and will be actively searching for living flesh, namely yours. Getting to safety after the bells ring is a terrifying prospect. Luckily, the bell ringing isn’t something that comes as a surprise. You wear a watch that you can check on your left wrist that is synchronized to the bells and will give you a little warning when it is getting close to that time of day when the bells are going to ring.

Another thing that the game captures really well is the weight of things. You can pick up a knife and swing it as fast as you want, but if you pick up an axe, you’ll find that even when you grip it with two hands, it has a heft behind it. Swinging the larger weapons feels powerful, but also it takes more thought because if you miss, you have to ready it again and that takes a lot more time and energy than with something smaller. 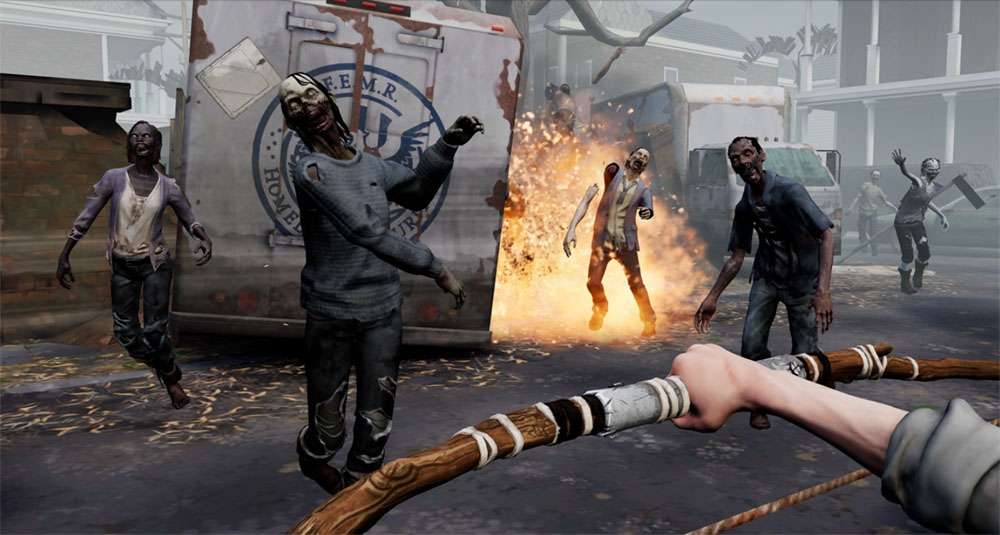 There are also ranged weapons like pistols, shotguns, bow and arrows, and more. Each of the weapons has its own unique characteristics that make them feel fun and different than the others. Shooting a bow, for example, has you placing the arrow on the string, then pulling back, aiming, and firing. The pistols allow you to fire one-handed or with the second hand supporting your aim. The reload mechanics are all really cool too. For example, the semi-auto pistol has you ejecting the magazine and sliding a new one in, followed by racking the slide, while the revolver has you ejecting the spent shells and then placing new bullets in the cylinder one at a time.

The way that you interact with the various inventory items you have is well-done also. You have two pockets, or holsters that you can attach knives, pistols, and other one-handed objects to that are on your thighs. Over your right shoulder is a slot to hang a larger weapon from, either a long rifle, shotgun, or two-handed melee weapon. Over your left shoulder is your backpack. You can just throw things over your shoulder to put things in the bag as you find them, you reach back and grab the bag off your back to go through your inventory and take things out that you might need. The bag also has an extra external slot to be able to carry one additional long item that doesn’t fit in the bag itself. Additionally, you also have a flashlight that is attached to your left chest pocket that you can either have switched on and attached, where it will basically just point straight ahead wherever you’re looking, or you can grab it and shine it around wherever you want. It will also dim and go out over time, but will recharge by shaking it, which is always eerie and fun when you’re in a dark basement with the moaning of zombies all around you. And finally, in your right chest pocket, you have your journal which is where you can track your mission progression, crafting recipes, character notes, and other things to help you keep organized. 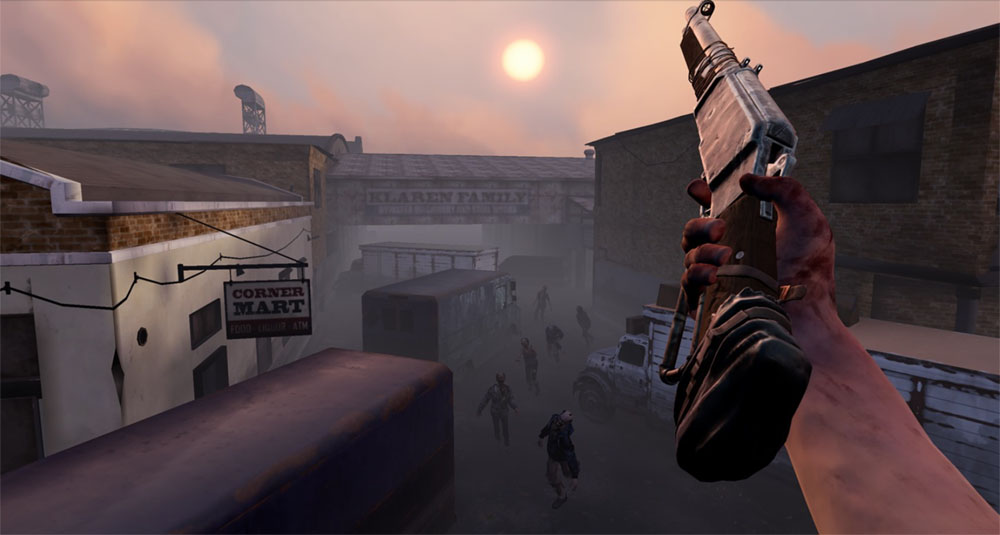 Beyond combat, there are other survival elements that the game does a great job of building into the gameplay loop. Your character’s health is something that you have to work really hard to maintain. Through eating food or taking medicine, you will be able to bring your health and stamina back up. But, you have to be careful. Your health bar is more than just a track of hit points. You have a current health meter, but also a maximum health that can be degraded through poor health. I made the mistake of eating a Twinkie that I found on the road and it actually took maximum health away from me. Guess those things really do expire after a while.

As you explore the various parts of New Orleans, you will come across other survivors as well, some of them friendly and some not so much. The ones that are friendly will often have side quests to engage in that each have different rewards based on how you choose to complete them. In true Walking Dead fashion, many of the missions have a difficult choice to make, where it seems that neither option is a good one, but you are forced to make a choice anyway. Moral dilemmas are awesome, aren’t they? 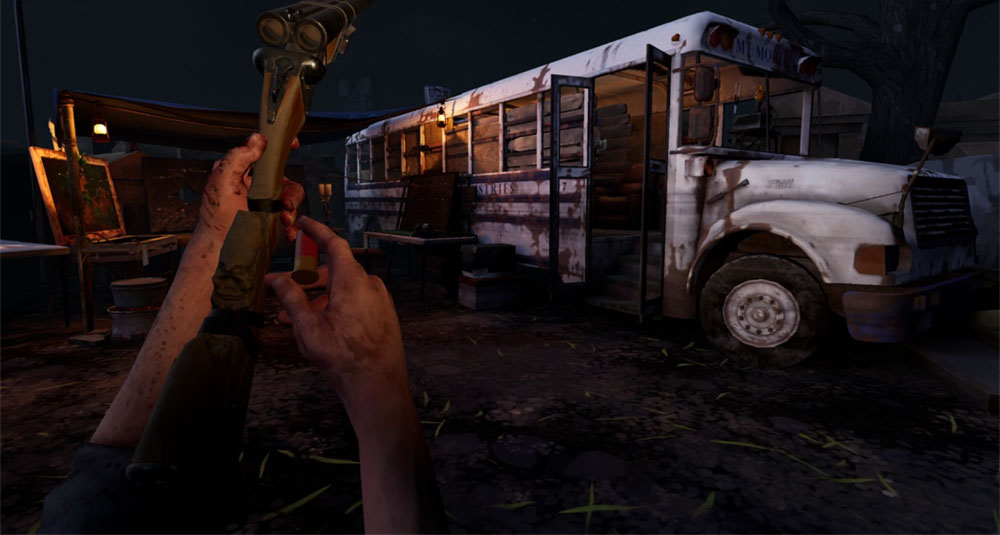 While exploring the world, I did find that there are a few places where the scale of things seemed off. One early example is the blue mansion that you are sent to for one of the first quests to find a microphone for your radio. While exploring this house, I found that the furniture, doors and other things all seemed to be enormously oversized. The doors made me feel like I was a small child. And it wasn’t even that things were too high and I just had my settings off or something, everything was too big. The doorknobs were massive, for example. And this disparity in size really messed with my sense of depth in that space. Reaching out to grab a doorknob to open the door was awkward and I had to try a few times before I was able to actually grab it. I’m not sure if this is a problem that persists everywhere in the game, but I did particularly notice it in that location. While it was a bit off-putting, I still really enjoyed exploring that house and would not say that the scaling issues were enough for me to not enjoy the game.

The main storyline of the game does a really good job of guiding you through the various sections of the game and introducing you to the different mechanics that you’ll need to survive. However, the openness of the design is such that you can easily spend a lot of time just roaming the streets, scavenging for parts, and going back to your base (which is an old bus, by the way) to craft new weapons and other inventory items to continue surviving. 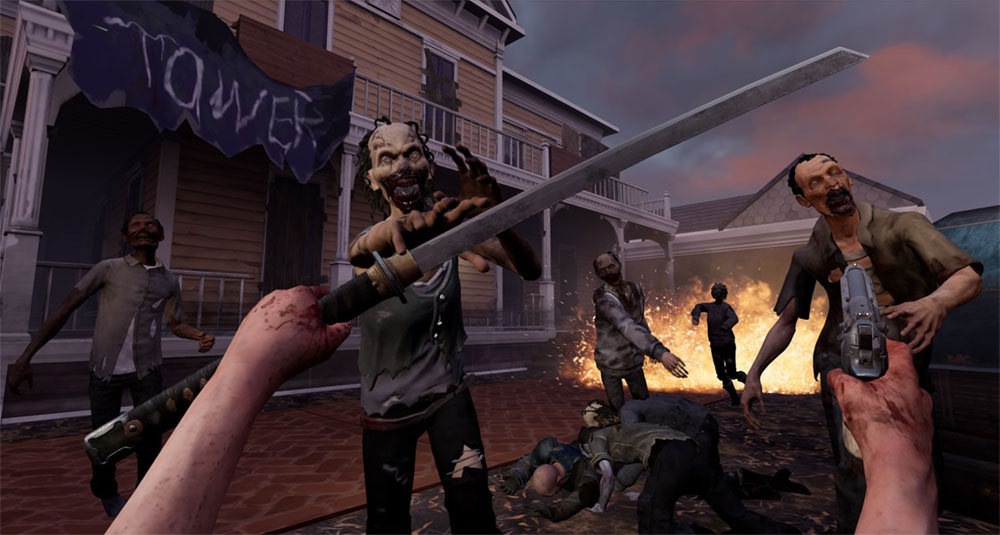 The scavenging and crafting aspects of the game are really engaging as well. There are so many different options and interesting combinations of gear that you can experiment with. You can even harvest zombie guts and cover yourself in them to hide your presence from the zombies instead of fighting them head-on. To craft recipes, you have to bring the random things you find in the world back to your base to recycle them for their component parts. An old shoe will give you bindings, for example, which is a scrap component that you need to craft other things. With these components, you have the ability to craft all the items you need to survive from weapons (melee and ranged) to medicine and food. Some recipes are not available at the start of the game and will need to be unlocked as you progress. In all, there are forty-five different craftable items for you to use.

I went into this game thinking that it would be a very simple zombie-killer game with an assortment of weapons that just focused on the gore-fest of smashing skulls. I was pleasantly surprised to find a rather deep and complex survival game with an interesting story and really engaging mechanics that kept me coming back for more. I highly recommend this game to VR users who are looking for something a little more involved than most of the games that are available right now. The only downside to this game on the Quest is that, from what I’ve seen of gameplay footage from the PC version, the graphics seem to have taken a pretty significant hit in order to perform well enough on the Quest. I will say, however, that even though the graphics are a little flat and cartoonish at times, I did not feel like it detracted from the enjoyment and immersiveness of the game on the whole.