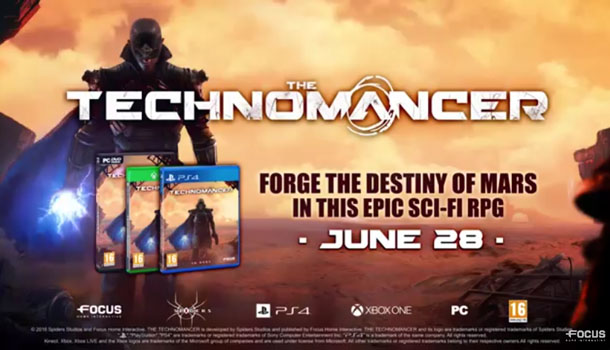 The Technomancer, the sci-fi RPG set on Mars, releases on June 28 and will be available for PlayStation 4, Xbox One and PC. A few days ago the Gameplay Trailer unveiled deep RPG mechanics – character evolution, dynamic combat, crafting, equipment customization, multiple ways to solve quests – as well as a captivating story where all your choices will have a direct impact on the destiny of Mars.

Today, the Companions Trailer unveils how all these gameplay mechanics are enriched by the interactions and relationships you will create with the companions who will follow you in your journey through the Red Planet.

Each companion has his own story. Get to know them because some will join out of loyalty, others out of mere opportunity… or as a result of a chain of unfortunate events. When you are out there, exploring or fighting, you may select up to 2 companions in your party to come with you. Choose carefully, as they all have their own unique fighting styles that should complement your own, including special talents useful for utility, such as crafting, knowledge in science, or lock picking. Picking one companion over another thus has a significant impact on the way you play The Technomancer, as well as there is an impact on the story you are living.

Your companions all have their agenda or preoccupations. They regularly ask you for help or for favors. Should you decide to accept their requests, you will trigger a special series of missions that let you learn more about their past. These quests follow their unique scenario that enriches the main story. Completing these side quests will add numerous hours of gameplay, and will improve your relationship with your companions…

Your companions level up alongside you. Each one gets his own inventory from where you can modify their gear at any time. Equip them with new weapons and armor that you can upgrade with your crafting talents. Make sure to provide them with the best equipment, you will drastically increase their survivability and lethality. And, you can also make sure they look appropriately badass as they run with you around the deadly place that is Mars.

Each of your companions has his/her own behavior, opinions, and moral code. If you act too much against their beliefs, they might get so upset that they would go so far as to leave your group. On the contrary, shine and prove worthy of their trust, and you’ll nurture friendships… or even romances. All your decisions will have irreversible consequences on Mars and its inhabitants!

Forge the destiny of Mars in this epic sci-fi RPG, available June 28 on PlayStation 4, Xbox One and PC.