Welcome back loyal Modsquad readers! As promised, we’re going to continue our coverage of the best and brightest World War II Internet Multiplayer experiences that the world of modifications and retail gaming has to offer. In Part II of our World War 2 roundup, we’re going to take a look a WW II Online, Return to Castle Wolfenstein and more. Get your helmet on private, we’re assaulting the beach in 5…4…3…2…. 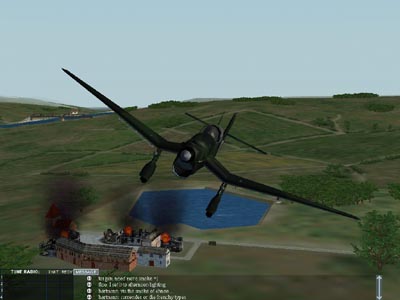 World War II online is a Massively Multiplayer Online Game (MMOG) that allows players to experience World War II in a fashion very similar to Battlefield 1942, giving you the opportunity to “command and crew” authentic WW II vehicles or take the infantry route to combat. What sets WW II online apart from games like Battlefield 1942 however is the fact that players become involved in the World of 1939-1945 and help to shift the balance of power throughout the game world, as if they were really contributing to the war effort. So instead of simply connecting to a server, fragging away and then vanishing into the bowels of the internet after its over, your score will be tallied and accounted for in the overall arch of the conflict.

As you successfully complete missions, you’ll move up the ranks until such time as you’ve had sufficient experience to plan your own large attacks using friends and online teammates. Essentially, WW II Online gives you a stake in the conflict, rather than a fleeting score based upon your number of kills or flags capped.

I haven’t yet had the opportunity to try WW II Online, but after a rather shaky online launch the folks over at Rat Software seemed to have gotten their act together. If you value the WW II combat experience, and really want to involve yourself with others experiencing the conflict, then you may want to give this one a try. Keep in mind however that like all MMOG’s, this one comes with a monthly fee. 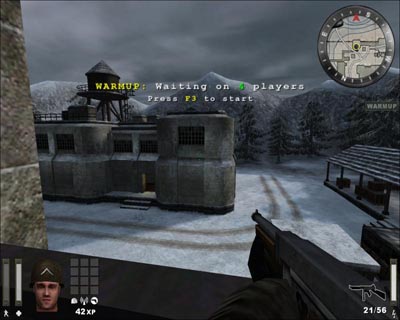 Return to Castle Wolfenstein helped to usher in a new era of Quake III based WW II games that not only fueled the WW II craze but also helped to shed light on elements of the occult in the Nazi regime. Zombies, monster and all sorts of ancient horrors awaited B. J. Blazkowiecz in the dungeons and crypts of Himmler’s Wolfenstein, but online what you’ll find is the standard Americans versus Germans setup.

The Quake based engine powering Wolfenstein combines fast paced action with great graphics (you’ve got to check out the flamethrower), and overall pretty much what you’d expect from a multiplayer WW II game – that is, very nice, engrossing objective/flag based matches. Wolfenstein’s objectives involve stealing documents, blowing up communications rooms, and blasting through walls. Most of the time it’s the Allies doing the attacking, with the German’s trying to stave them off until the clock runs out.

To accomplish many of the objectives teamwork is necessary: the engineer can blow up obstacles, the medic can help heal, the lieutanant can pass out ammo and call down air strikes, but by themselves these skills don’t amount to much, and it’s a shame that many Wolf players out there still don’t coordinate the way the game’s creators intended them to. Don’t play this game looking for realism – RtCW’s multiplayer style is about as close to its run and gun Quake III roots as a game can get.

If you crave more Wolfenstein-esque action, don’t forget to check out Enemy Territory, a free, stand-alone (i.e. you don’t need the original RtCW to play) multiplayer game that uses the Wolfenstein engine. Enemy Territory was originally supposed to be an expansion pack that chronicled the exploits of B.J. and his fellow Rangers before the events of RtCW. The software company developing the project wasn’t making sufficient progress on the game, so Activision, ID and Splash Damage collaborated to release it as a free game (yea!). I found Enemy Territory to be rather frantic and confusing at times, and can’t help wonder what the original game would have been like (it was supposed to allow players in the single player campaign to control smart AI teammates). Even though its not my cup of tea, you may find Enemy Territory to your liking. If the words, “Wolfenstein” and “Free” strike a chord, give this one a shot.

The Third Reich: Time to get Real 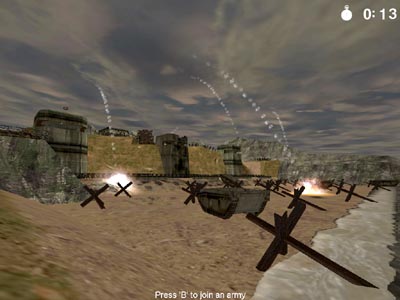 In many ways The Third Reich can be viewed as the predecessor to Red Orchestra. It uses Unreal Tournament 2003’s parent engine, the original Unreal Tournament, and takes players into a realistic world of infantry combat between the Germans and Americans in Western Europe. The Third Reich is an extremely high quality modification – the poly count on each map meets and sometimes exceeds the official count put into each official UT map, and the mod pushes the aging UT graphics engine to the limit. Just like Red Orchestra, a TON of work went into making this mod feel realistic.

Just about everything is taken into account here, including iron sight aiming, stamina systems, bandages for bleeding and even wind and ballistics weight factors. Some find this type of combat invigorating, other not so much. Much of it depends on the players interpretation of the game experience. Some players will appreciate the thought and work on an academic level, but not during actual playtime.

If you’re a sniper, and you’ve missed your last 6 out of 7 shots, are you going to say, “Gee, it’s great that the ballistics, movement and wind factors are keeping me from scoring kills and having a good time. I’m so glad that the game factors keep punishing me as a player.” Gamers into these kinds of ‘realism’ mods are rarely forgiving or supportive; so don’t count on any sympathetic ears.

On the other hand, the fact that The Third Reich makes it so difficult to hit the enemy underscores the very ‘realistic’ and unpleasant nature of killing during war-time; it takes a lot of wasted work and effort to kill another human being, but once again this may be more of a philosophical appreciation of The Third Reich’s efforts. If you’ve got an old copy of Unreal Tournament laying around, or you enjoy slower paced games with added realistic depth, or perhaps if UT 2003’s hardware requirements are too steep for you, give this one a try – the Third Reich Team plans on continuing development for UT 2004, so this mod will be one to watch.

On the Horizon: Path to Victory 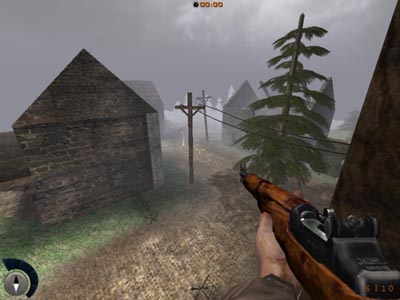 And finally folks, if you still haven’t gotten enough WW II action to satisfy, head on over to Path to Victory, a new mod currently in development for UT 2003. Path to Victory’s focus lay on infantry combat between Allies and Axis in Western Europe, and early screenshots look promising. The PTV team hopes to incorporate an RPG-like system into its class allocation, and balance medium paced game play with realistic factors such as stamina and weapons recoil. The mod is currently excepting beta-testing positions, and has two trailers available.

So there you have it fellow Modsquaders. For those of you seeking to strap on your combat boots and kick some Nazi butt, or those that want to have another online go for the Reichstag, there’s never been a better time to try out some good old fashioned (high tech) WW II internet gaming.

As a special note to parents and older siblings, please be advised that the ESRB “Teen” rating for many WW II games changes to a definitive “M” for Mature, due to the gratuitous amount of foul language and verbal harassment that most of these games engender. If you have a young one in the house who wants to play these games, please make an effort to preview the online content of each game to make sure that it is acceptable to you before allowing them to view this content.

The question I’m most often asked is, “With all the WW II games out there, where should I start?” The first, and usually best way to go about it is find out which style of play suits you best. Do you like fast and furious action, and just want to get in and out of a quick fight with a minimum of fuss? Do you enjoy slower, more thoughtful games with a touch of realism added? You might be a determined believer in game play over graphics, or the type that demands the most eye candy for your dollar.

Determining your tastes is always an individual process, and is usually best found out through experience. If you have an old copy of Half-Life sitting in the garage, or just bought UT 2003, give some of the free modifications for these games a try before rushing out to buy the more expensive retail packages. Also keep in mind that many retail WW II games, like Battlefield 1942, have had quite a few modifications made for them (such as weapons realism, custom skins, models, combat tweaks, etc) enhancing their replay value quite a bit.

Whether you decide to try one or all of the games mentioned today, make sure to deport yourself in a manner that you would find appropriate in a public venue; in other words, play with class, have fun and try to engender the spirit of competition in every server you play. Ignore bad online behavior, be a good sport and you’ll help to make the online WW II experience a better one for all.