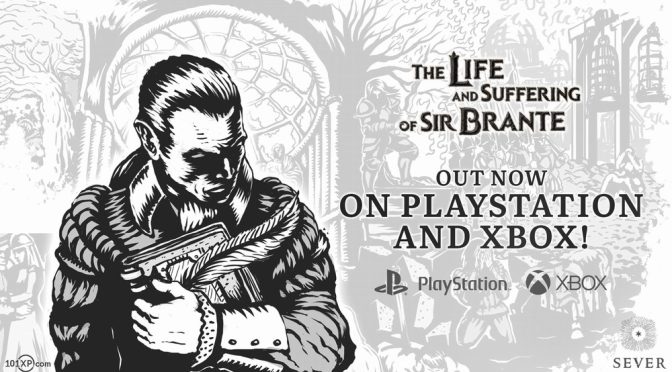 Sever and 101XP Publishing are pleased to announce that their award-winning narrative-based dark fantasy RPG, The Life and Suffering of Sir Brante, is officially available to download and play on both PlayStation 4 and 5 as well as Xbox One and Series X|S.

Launching last March to a 92% positive score with over 3,000 reviews on Steam, The Life and Suffering of Sir Brante takes players on an adventure that starts at the very beginning of life — a little boy born in a dangerous medieval realm, split at the seams, governed by powerful nobles, and ruled over by the all-seeing Twin Gods. Live and grow alongside Sir Brante, dictate his choices and mistakes, and see it all unfold on the enchanting pages of the protagonist’s journal.

Xbox and PlayStation players can now take control of Sir Brante, the lowborn son of a noble father and a peasant mother and embark on a life-long journey from birth until true death, where every choice matters — from breaking family bonds to rewriting the established laws of the universe. Where will you lead Sir Brante, and where shall his story take you? The choices are plenty, but the freedom to choose is yours alone.

Endure great upheavals, encounter strife and love, push open and lock shut the doors to your own future as Sever’s Excellence in Narrative award-winning title launches on consoles today for $/€24.99.

Visit the new Sir Brante Xbox Store page here, the American PlayStation page here and European PlayStation here. Nintendo Switch and Mobile fans can also get excited since Sir Brante’s launch is scheduled for both platforms in the future.

“The richness of Sir Brante’s narrative and its myriad of variables and intricate choices offer players a truly immersive world one can easily get lost in,” said Aleksandra Volskaya, Head of Brand Management and PR at 101XP. “We’re happy to know that the game was welcomed with resounding positivity by the indie game community last year and are equally excited to now bring The Life and Suffering of Sir Brante to Xbox and PlayStation!”

“We all believed in our title from the very beginning, but to see Sir Brante featured on the front page of the Steam Store last year was humbling and a little unexpected,” said Dimitry Ivanov, Studio Head at Sever. “We’re grateful that so many people discovered our game and fell in love with its world, which allowed us to keep working on a project we’re all proud of, delivering it to new audiences that, we hope, will enjoy it just as much!”

Stay up-to-date with the latest news about the game’s development by following The Life and Suffering of Sir Brante and101XP Twitter accounts.