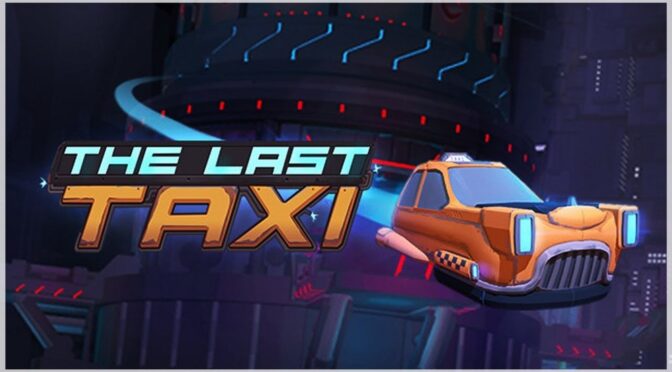 In a future where taxis are still a thing, but human drivers are not, you will be playing as the last human driver; a position that comes with certain duties and expectations.  The Last Taxi does manage to surprise with its unexpected approach to recreating this blue-collar job by not having you actually drive the cab.  Instead, you pick a spot on the city map, pick up your fare, and take them to their destination…all on rails.  So, what’s left for you to do? 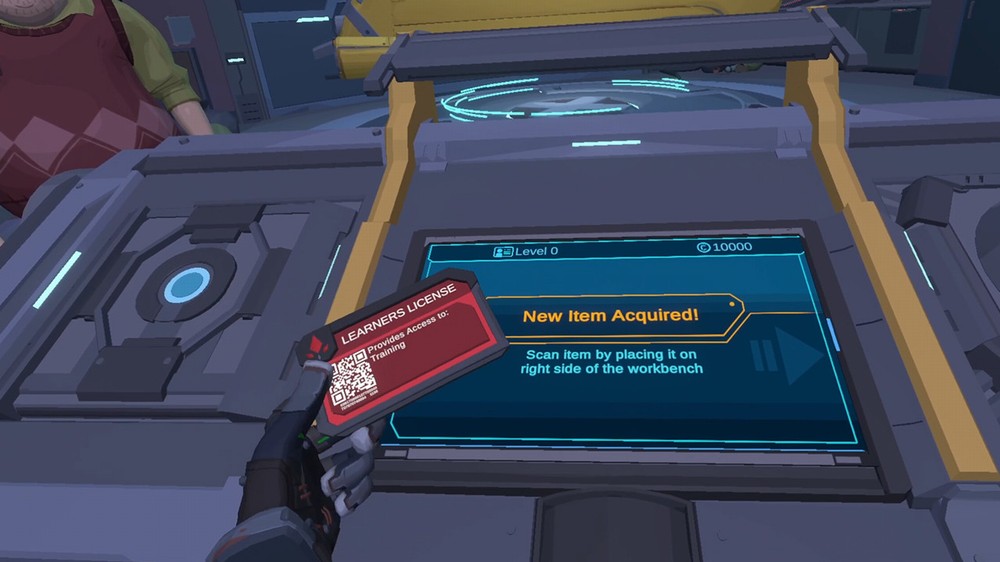 First of all, you’ll want to complete the informative tutorial that will get you acclimated to the workstation in the garage as well as the basic controls of the cab – more gadgets get added to the dash as you rank up, so new learning happens on the fly as needed.  I found it oddly disturbing that your cab is powered by energy derived from your own human blood that is dispensed from the console and inserted into your wrist device. 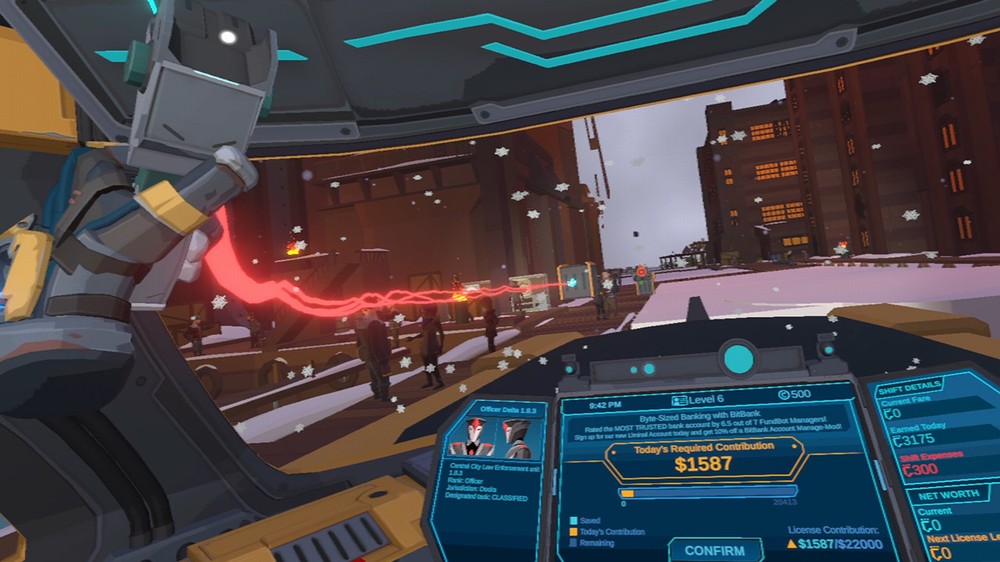 While your cab might be on autopilot as it glides around the futuristic skyline of Progress Point, you’ll still need to interact with your dashboard as well as your riders in back, but the core of the game is conversation…lots of conversation.  The game offers a diverse cast of characters, each with their own custom conversations that you will need to navigate in order to get that 5-star review and big tip or you might find it more profitable to steer the conversation so your riders confess to various crimes that you can then report when the ride is over.

As each new rider climbs into you cab you can choose whether or not to record the conversation; simply insert a blank recording disc into the dash and then wait for your rider to say something incriminating to log the crime.  At the end of the ride, you can choose to turn the tape over to the authorities for a reward or toss the tape.  Not all passengers are criminals and even when they do confess to certain improprieties you need to use your own judgement on whether to turn them in.  There are more than 80 passengers, and in the several hours I’ve played I have not had a repeat rider. 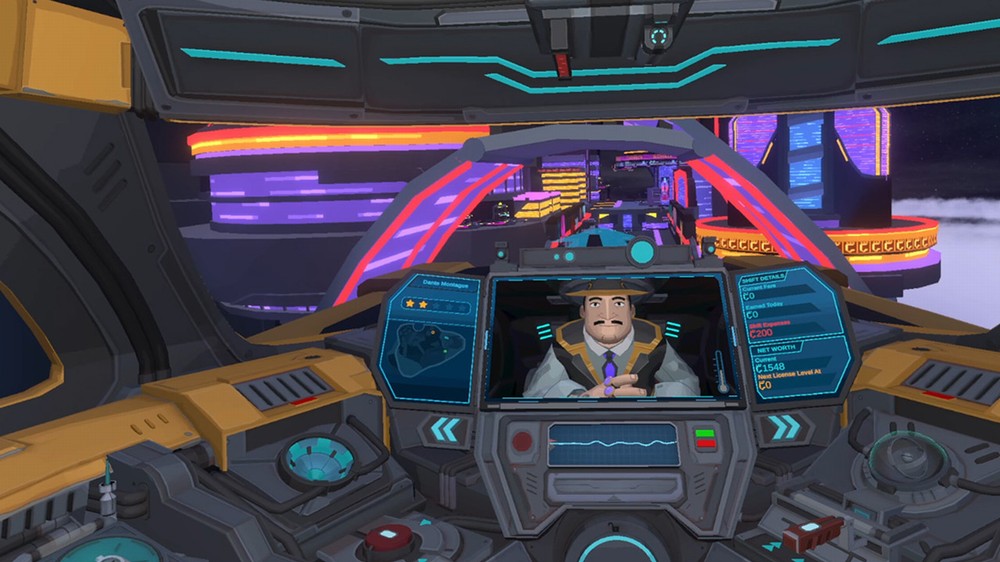 The conversations flow quite naturally with excellent voice acting that really engages you for the duration of each ride, meanwhile the real world is also affecting your cab ride with periodic distractions that require your immediate attention.  You might need to honk your horn to get past a slow driver or maybe throw up a temporary shield to block an obstacle or use your handheld gravity gun to collect stray cargo floating around the city for spare cash.  Ash particles and toxic sludge can block your windshield, forcing you to reach for the wiper controls so you can see the road ahead as indicated by the travel line and arrow that weaves a scenic course through the vast cityscape. 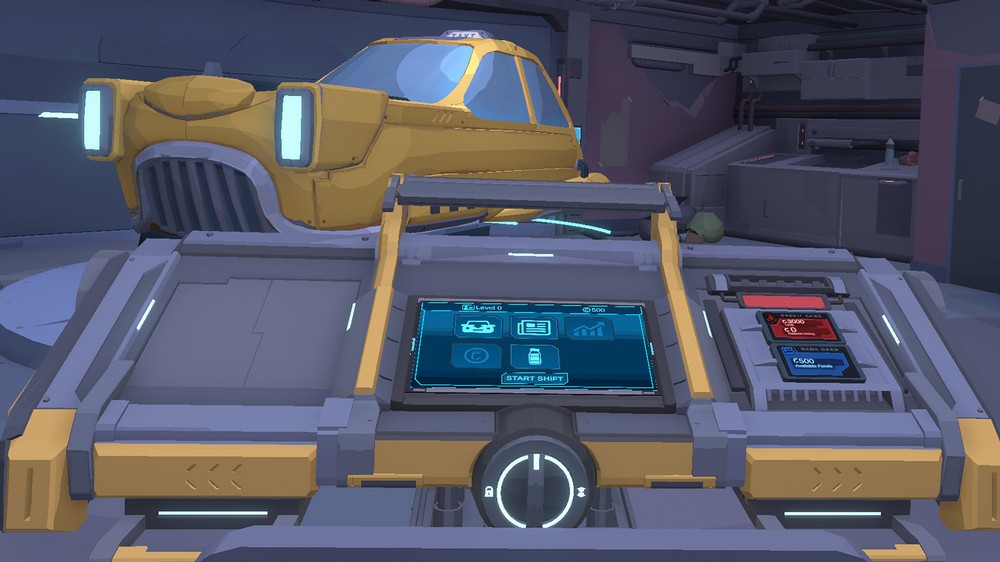 There were definite times where I was reminded of The Fifth Element, both in the level of futuristic tech on hand along with the design of the actual yellow cab.  The interface is very cool, relying on a tablet device that gets plugged into the workstation at the garage or into the dashboard of your cab.  You can even use the device to monitor the health and wellbeing of a certain infant you are left to care for, but that is going into spoiler territory.  There is a bit of busy work when you aren’t “driving” the cab.  You might be given an object that you can scan, or you might get an upgraded license that grants you access to more areas of the city, or you might have expense vouchers that need to be scanned to update your bank account.  You have daily expenses, and you will need to earn enough on your trips in fares, tips, and reward money to cover operating costs.  There are also other required objectives for earning updated licenses. 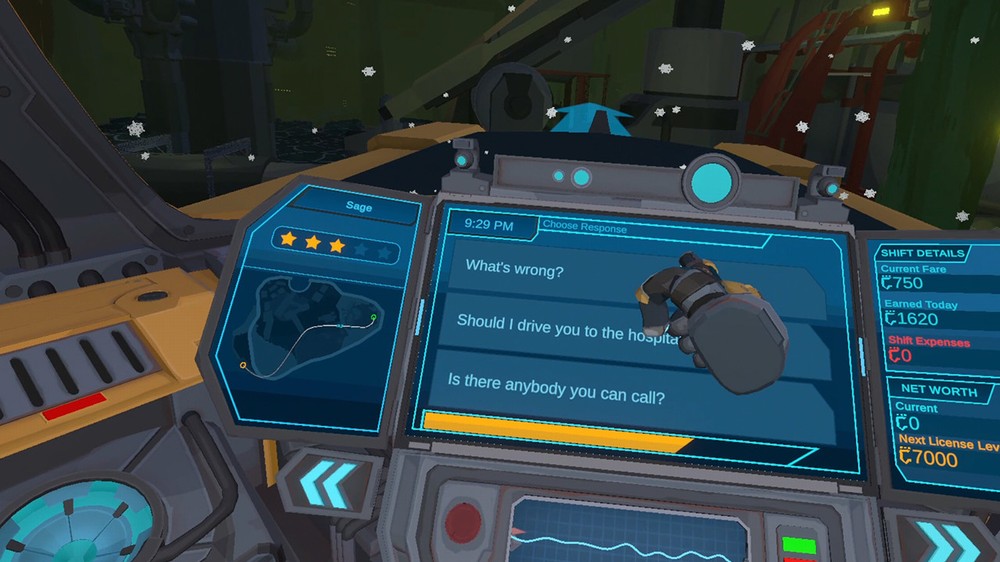 The Last Taxi is a charming little game that doesn’t require a lot of thought or fast reflexes…until it does.  There is some fun sightseeing to be had with all the cool elements used to create the various parts of the city from a sprawling fishing village built on stilts to flashy neon tower high rises, slums, and many other distinct areas you’d expect to find in a futuristic city.  There is easily ten hours of gameplay here with more than 20 unique endings based on your choices, so there is plenty of content to hopefully justify the $30 price tag.  Just know going into this that The Last Taxi is a very passive game where you don’t actually drive the cab.  I’m seeing a lot of disgruntled gamers who jumped into this game not knowing what to expect. 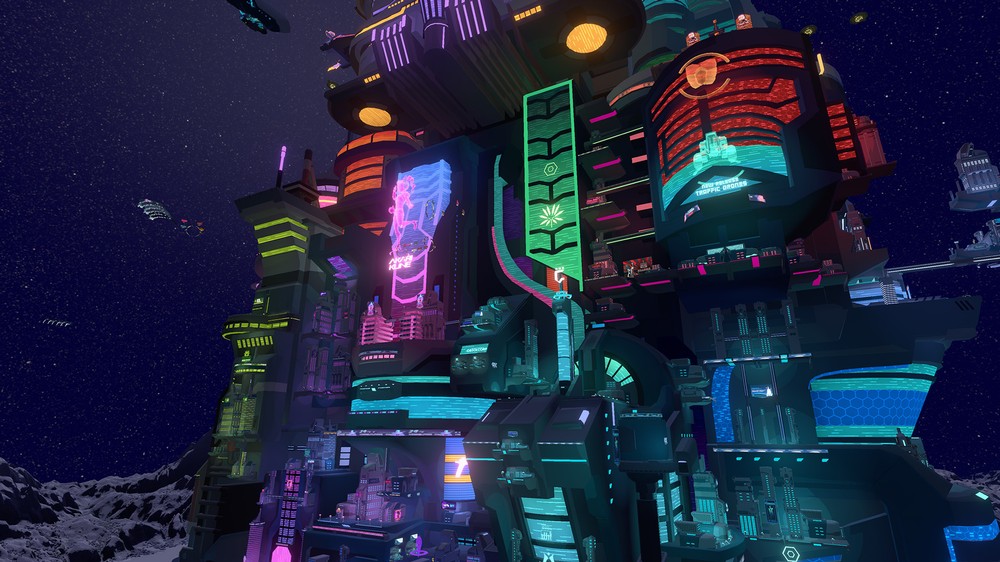 I played on both the Vive and the Rift S and the game is nearly identical.  The darker nature of the city scenery made some parts look nicer on the Rift S and the controls were a bit more intuitive using the Touch controls versus the Vive wands.  The overall art design is rather simplistic with basic polygon structures and flat textures.  The garage and the cab interior are delightfully detailed, but the overall visual design felt limited, almost like something we would have played back when VR first launched.  I did enjoy being able to converse with my passengers using the tablet in my dashboard rather than having to turn and talk over my shoulder, but you can if you want.  The Last Taxi desperately wants to be Cloudpunk in its overall design but doesn’t come close.  Considering the limited nature of the graphics I was surprised that my RTX3080 card was having trouble running the game smoothly; there were lots of jitters and hiccups while flying through the city. 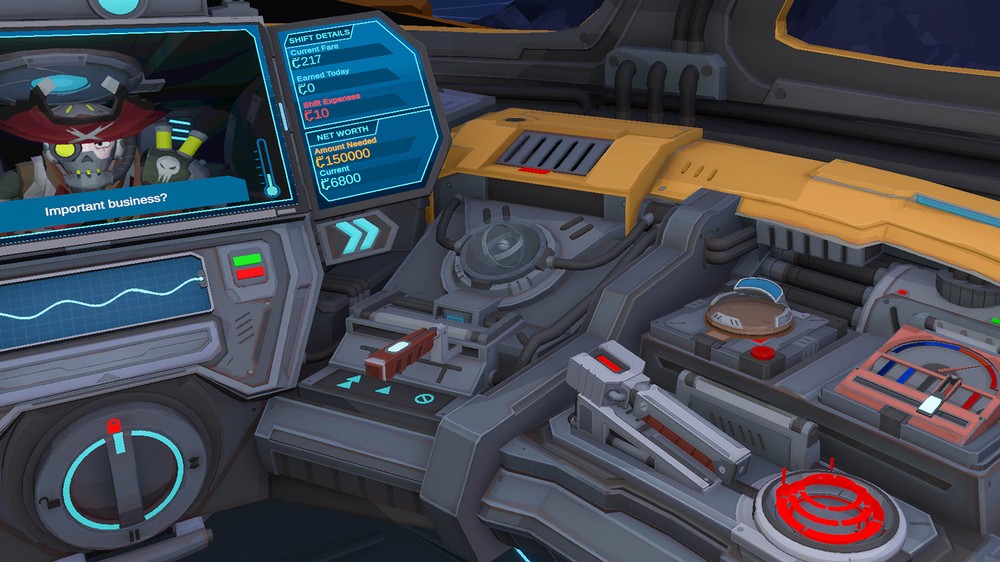 Despite a few nagging tech issues and possibly a price tag $10 too high, I still enjoyed my time with The Last Taxi.  It’s definitely a more relaxing game; one you won’t have to worry about VR sickness, and one that can be enjoyed over and over since you have a lot of control over how each encounter plays out.  The city is constantly evolving with each ride along with your path to one of 20+ endings.  How it all plays out is entirely up to you.