After a few weeks of completely immersing myself in Naughty Dog’s masterpiece, The Last of Us, I have come to the conclusion that this is without a doubt one of the most memorable games I have (or likely ever will play).  I was so caught up in this game, and even now, a few days after decompressing from the experience so I could write a rational review, I still have memories and images from my adventure that are just as vivid and real as anything that has happened in my real life – perhaps more so.

But that should come as no surprise to anyone who has played any of the Uncharted games.  Naughty Dog has already proven themselves to be master storytellers, and The Last of Us is more interactive storytelling than videogame…for the most part.   This 20-hour emotional rollercoaster ride fell prey to gaming tropes on several occasions and even repeated some to the point of making a self-referential joke on the matter, but it was rare that I was ever taken out of the experience for more than a brief moment.

The Last of Us is a post-apocalyptic survival horror adventure set 20 years in the future, but the story begins in present day as we are introduced to Joel and his daughter, Sarah who share a refreshingly strong bond.  It’s Joel’s birthday and also the first day of the pandemic that is causing random people to insanely attack others as witnessed when Joel and Sarah must flee their home with his brother Tom in one of the most emotional opening preludes in videogame history.   It’s no spoiler that Sarah is senselessly shot and killed as they try to escape the city, which sets up the emotional theme for what is about to come 15 years later when Joel is asked to escort Ellie, a 14-year old girl who may hold the cure to the infection, to a group of survivalists known as the Fireflies who can develop a vaccine. 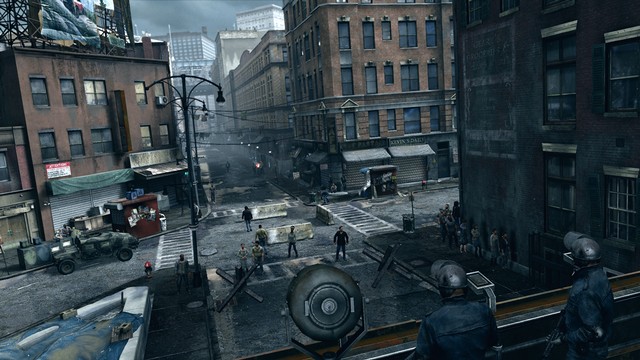 The Last of Us is surprisingly not as heavy on cutscenes as you might imagine given the strong focus on story.  Much of the narrative is seamlessly delivered in various notes and journals lying around the meticulously detailed levels as well as some fantastic dialogue and banter between Joel, Ellie, and the other cast of characters that come in and out of their lives.  Joel and Ellie’s journey seems simple and short at first; simply get across town to the capitol building, but when things go terribly wrong our misfit duo must trek across the country to seek refuge and resolution.

The heart and core of the game resides solely on the relationship of Joel and Ellie; a relationship far more advanced in gameplay and maturity than Lee and Clementine in The Walking Dead game.   What struck me most was seeing how Ellie, a girl who has known no life other than after the apocalypse acted and interacted with Joel, a grizzled bitter man who, for the first half of the game resents Ellie as the embodiment of his own personal loss, but then who comes to love her as his own adoptive daughter.  The level of emotion is off the scale and spills from the screen straight into the player’s heart in a way that movies could only hope to achieve.  The fact that you are controlling these characters and participating in their adventure makes the whole thing that much more personal.

The performance capture really sells the experience with Joel and Ellie being played to perfection by Troy Baker and Ashley Johnson.  Troy’s character looks and sounds much like Noah Wyle who plays Tom Mason on TNT’s Falling Skies, while Ellie has been compared to Ellen Page.  While there is a minor facial resemblance I think the comparison is coming more from her mature banter and frequent droppings of F-bombs and other salty language.  It was remarkable to see such detailed facial resemblances in other secondary characters such as Brandon Scott, who plays Henry. 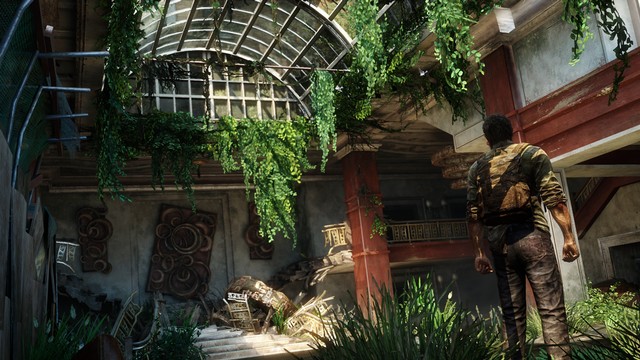 The Last of Us isn’t all story, and you will be required to actually play the game from time to time and that is when some of the best and most intense stealth-survival-horror elements are brought out.   Enemies in the game range from human soldiers, mercenaries, and dangerous survivalists to the infected who come in a few flavors.   Clickers are the most terrifying, blind as a bat and also just as sensitive to noise, which means you can use your flashlight to spot them, but killing them requires several bullets (which usually attract more) or a quick shiv to the head.  If a Clicker gets close enough to grapple you it almost always means certain death, which is why it is always best to distract them with a bottle or brick and sneak past them.

Clickers are the middle stage result of the infection.  You’ll also have stage one creatures who act more like zombies on meth, and stage three bloaters who move slow but can lob spore bombs at you from across the room.  Things get really crazy when they start mixing up the enemy types.   While Clickers can’t see your flashlight, stage one zombies can and will rush and attack and depending on how quietly you kill them will determine if any Clickers join the party.  The Last of Us treats each encounter almost like a puzzle, giving you the ability to use Joel’s super-sensitive hearing to locate any creatures making a noise and paint their ghostly silhouette on the screen, even behind walls.  And if you should die (and you will) you can simply “restart the encounter” since the game wisely checkpoints before each new area.

The Last of Us not only encourages stealthy gameplay, it practically demands it by limiting your ammo and resources, which in turn forces you to play like a survivor, meticulous searching each new room, opening drawers, cabinets, and searching anything with a triangle icon.  There is a clever crafting system in play that never overwhelms the pacing of the game.  If anything, it adds tremendously to the experience as you are constantly creating bombs, med kits, and makeshift weapons.   You also collect parts and pliers that allow you to upgrade your weapons whenever you can find a workbench; things like increasing ammo capacity or adding a scope to a rifle, or enabling a faster reload. 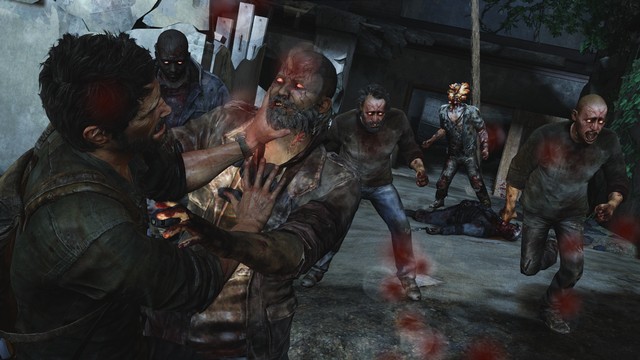 There are numerous weapons and they all seemed perfectly balanced.  I may have favored the shotgun due to its awesome stopping power, but most of my weapon choices were almost always based on which gun had the most ammo at the time.  You even get a bow and arrow about halfway through the game because, as we all know; ever since the Hunger Games you can’t have any form of entertainment that doesn’t have a bow in it.  Seriously, the bow works well, more so after you upgrade its range and draw time, and while I have never played a Cabala hunting game in my life I really loved the winter deer hunting with Ellie.  It’s also the only way to silently kill at ranged targets.

There were only a few moments where stereotypical game clichés broke my suspension of disbelief.   After the fourth time of shuttling a non-swimming Ellie across the water on some convenient nearby wooden pallet even the designers started poking fun at themselves with clever dialogue.  Perhaps the worst offense was the transparent AI awareness of the enemies on the NPC’s.  Ellie, or anyone else in my party for that matter, could easily run right up in plain sight of enemies and they wouldn’t spot them.  And while I did appreciate the companion AI that proved effective in combat, I wish they wouldn’t fire that first shot while I’m halfway snuck across a Clicker-filled room.

Perhaps my biggest complaint with The Last of Us is the ending; not so much in the way it played out because, frankly, it played out just the way I expected and wanted, but in that I had no real choice in the outcome.   I saw where it was all leading about two hours before the end – the whole “the needs of the many outweigh the needs of the few” mantra, but I was more than prepared to make the “selfish” choice as I was sure Joel would have done if this were a movie out of my control.  As it turned out, it was a movie out of my control, because when that point of decision was reached, I only had one option.   If you haven’t played the game then you have no idea what I’m rambling about and if you have, you know exactly what I’m talking about.   I’m just saying; don’t setup a choice then deny me the chance to make it. 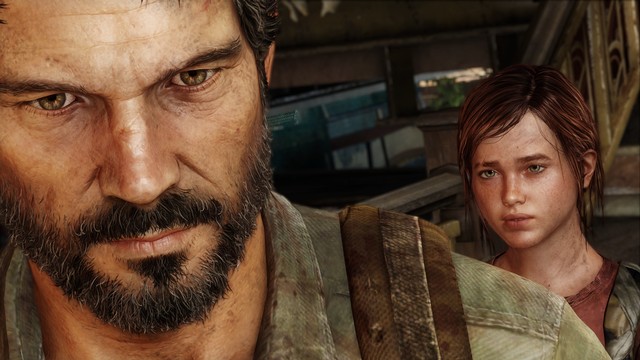 I enjoyed the seriousness of The Last of Us; the fact that Joel was a stone cold killer when he had to be as witnessed in several kills I could only call “executions”; even when they might not have been necessary, but it just drove home the kill-or-be-killed atmosphere of the game.  I also enjoyed the fatherly instruction that Joel gave to Ellie on basic survival skills; some that pays off in the Winter chapter of the game where you actually get to play as Ellie.

I found the multiplayer component in The Last of Us as much of a tacked on, unnecessary feature as I did in Uncharted.   That’s not to say the deathmatch and team deathmatch scenarios aren’t well executed; but after the emotional ride of the story I would be more inclined to replay the New Game + than play an online shooter set in the same universe.  Even so, I did find the reward system of earning supplies and building up your own camp of survivors intriguing, and all of the community based unlocks such as weapons, perks, and outfits kept me playing longer than I expected.   Plus, if you want to Platinum trophy this game you will have to play online.

There is no denying this is one of the PS3’s finest games, both for the system and this generation.   It’s sad there were some aliasing issues, mostly in the cities with flat edge constructs, and also that the game didn’t run in 1080p.  Even so, the visuals are breathtaking at times and you learn to look past the flaws.  The sound mix supports everything from stereo to Dolby Digital and DTS HD.  I had major issues with the PCM 7.1 mix in that characters would either initiate or continue conversations when I wasn’t around and you couldn’t hear the dialogue.  I ended up turning on subtitles and then it got even weirder reading all of these conversations that had no audio.   I suppose it’s realistic and a good reason to stick with my party, but in a game that mandates you search every nook and cranny, either force the AI to keep up with me or save the pertinent conversations for when I’m actually there to hear them. 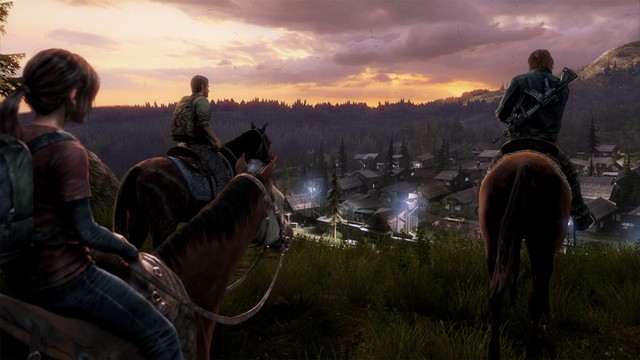 I haven’t been moved by a videogame this much since The Walking Dead, and while both games feature a bleak post-apocalyptic theme and a surrogate father-daughter relationship, The Last of Us takes the concept to a whole new level of interactive entertainment.    You don’t just play as Joel…you become Joel, even to the point where, when you do assume control over Ellie, it feels a bit strange.   At its core, The Last of Us is about the bond that forms between Joel and Ellie – it is the story of love, loyalty, and redemption, and a game that no one with a PS3 should even consider skipping. 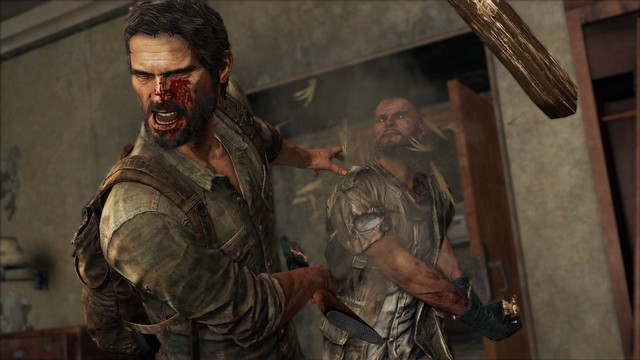 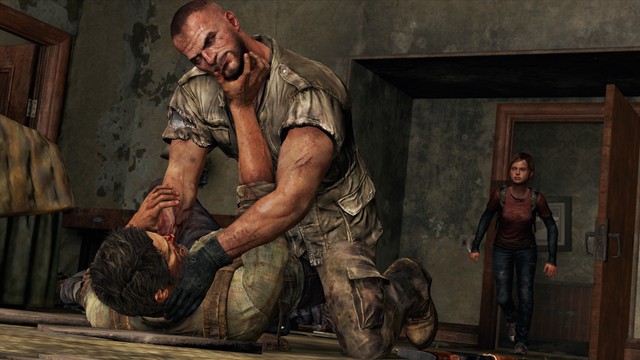 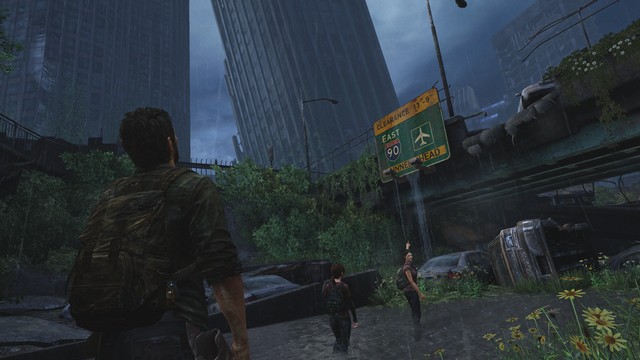 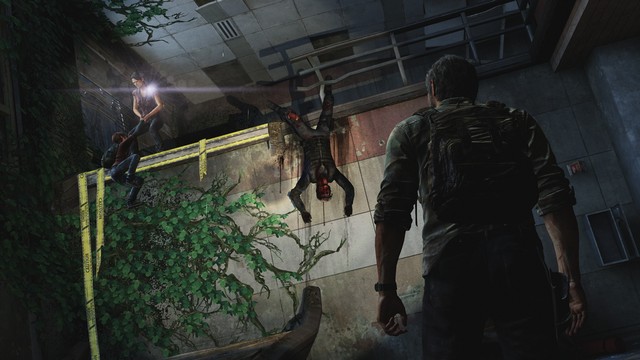 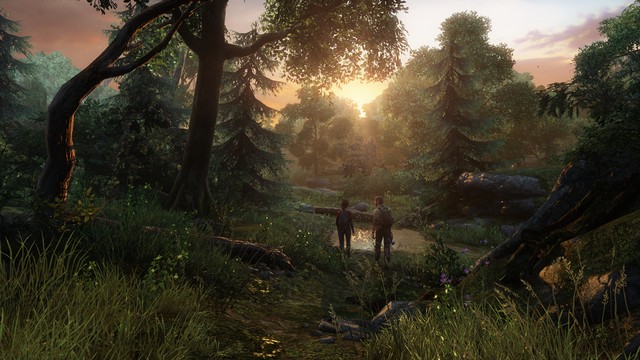 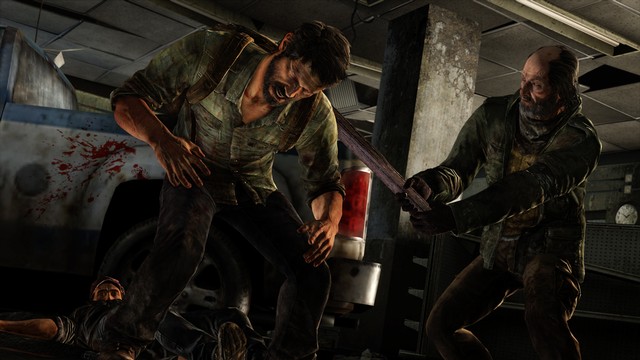 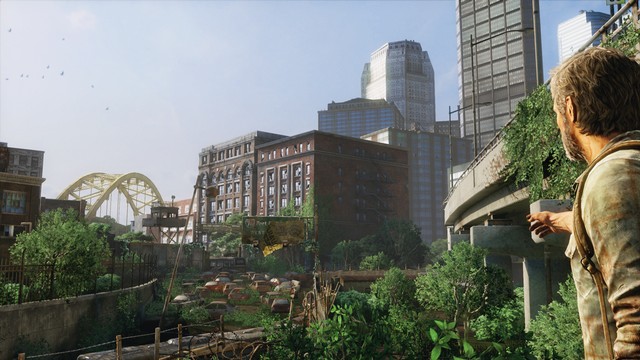 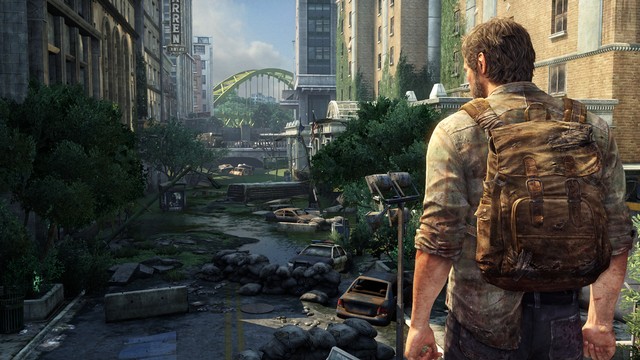 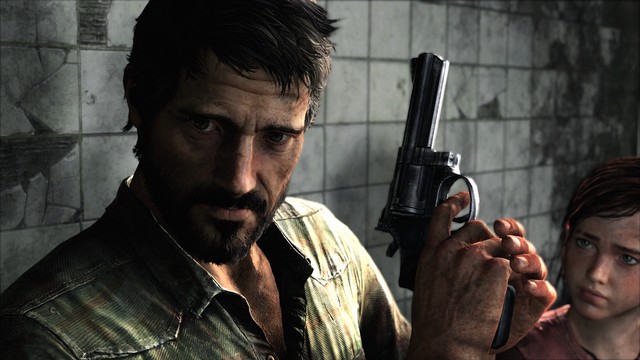 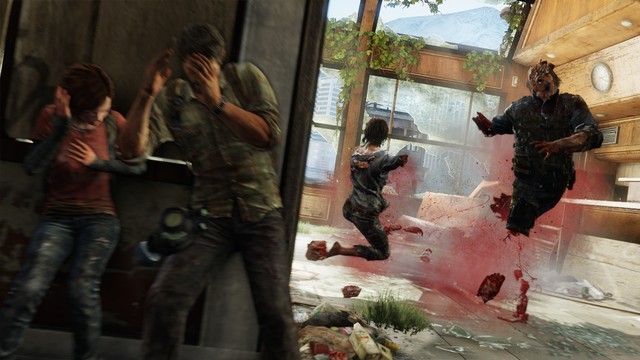 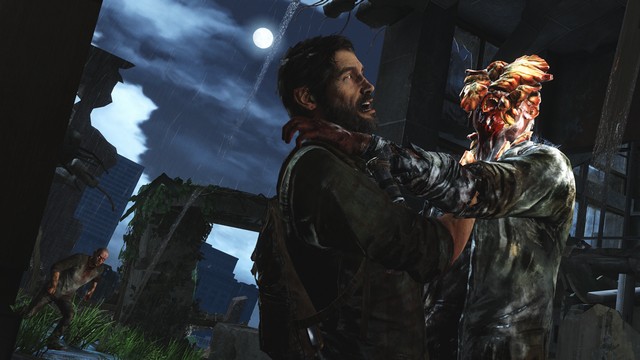 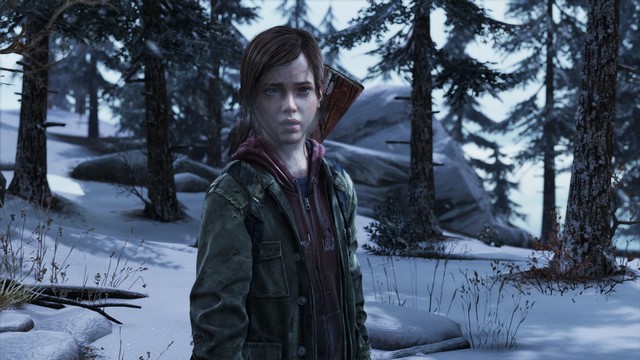 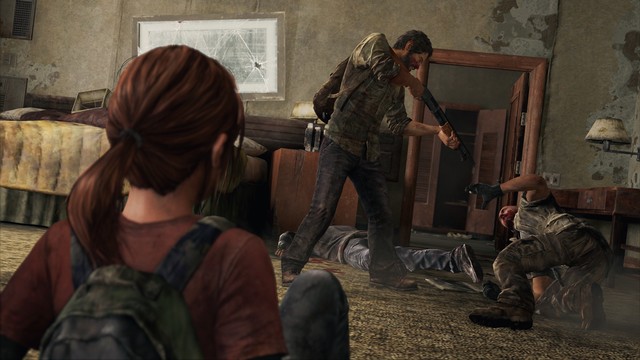 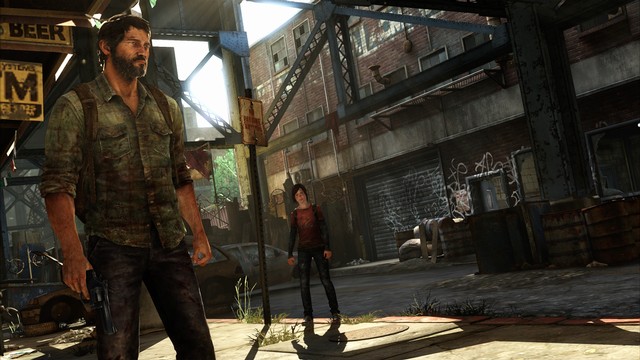 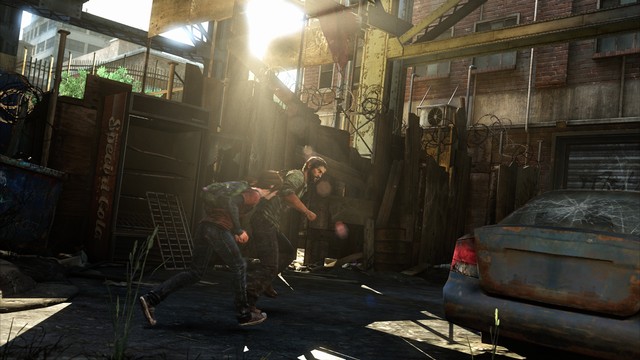 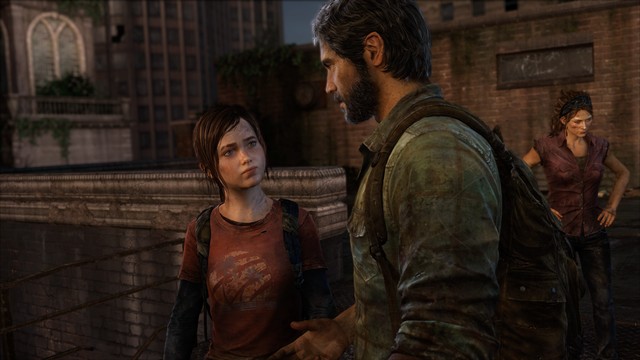 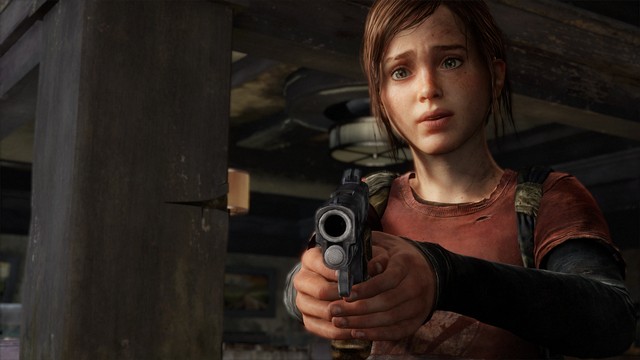 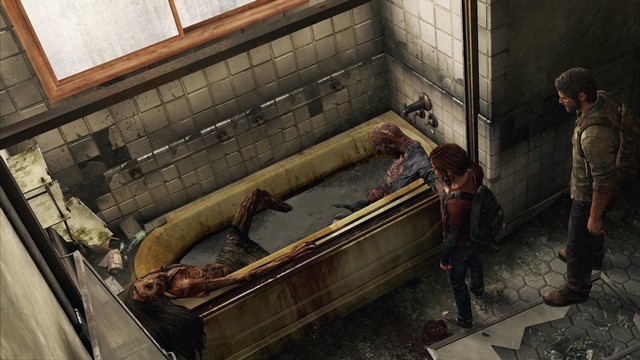 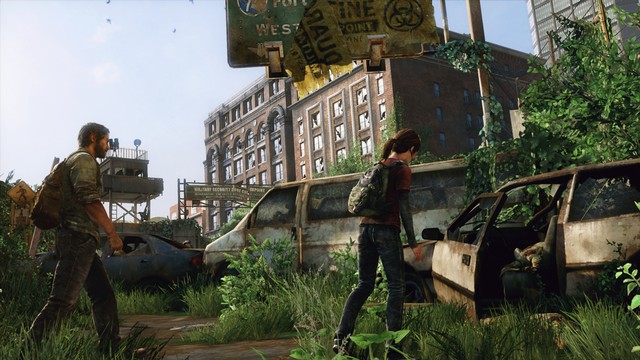 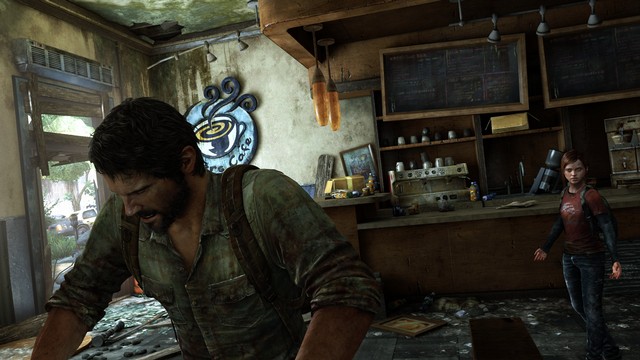 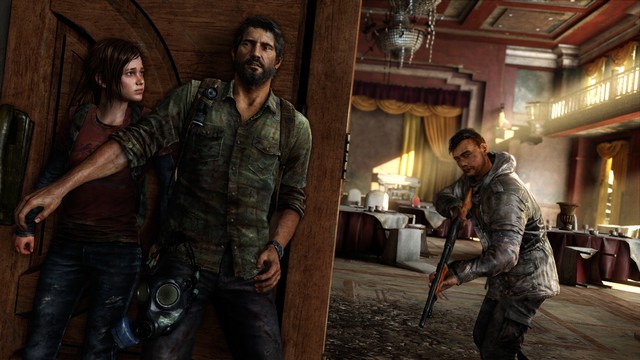 One thought on “The Last of Us Review – PlayStation 3”