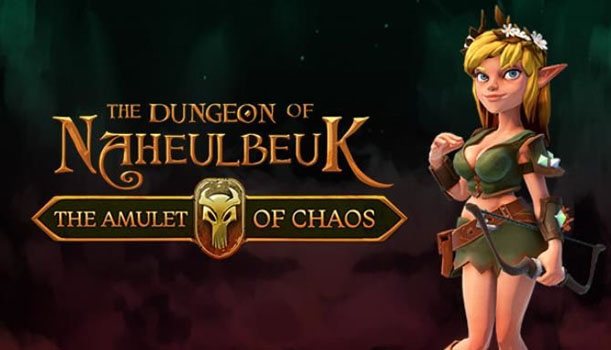 The longer you play any genre the more you become accustomed to certain cherished clichés…um I mean staples. None hold more tropes than my cherished genre: the RPG. Roleplaying games are by far my favorite as they usually offer hours of content and plenty of variance in subject matter from modern exploits to Ye olde dungeon romps. But let’s take things up a few bow notches as we dive into the realm of the parodic RPG with the release of The Dungeon of Naheulbeuk: The Amulet of Chaos for PC.

I’ll let your brain process how to say that title by telling you that The Dungeon of Naheulbeuk series got its start as a French language online audio series. Created by John Lang in 2001, the series has since branched out like an RPG skill tree to other medium including this first time videogame. While I wasn’t aware of Lang’s work before I certainly am now with this tactical RPG. Growing up tactical RPGs didn’t hold my attention as much as they do now. 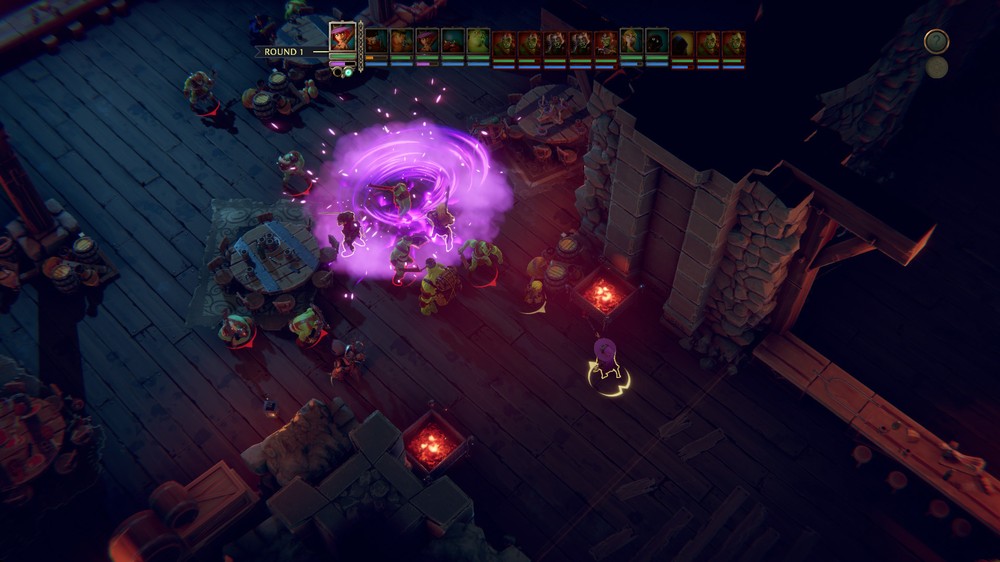 Perhaps I’ve found myself wanting more depth in combat then just pressing buttons on highlighted skills like in the old days of RPGs. Well The Amulet of Chaos definitely succeeds on that front as you first set out to find the twelfth statuette of Gladeulfeurha to fulfill some prophecy in the land of Fangh. Yeah that is until you get stuck with the titular cursed amulet that just wrecks your band of adventurer’s day/week/year. Gee thanks Dwarf!

Players are quickly introduced to your party of…inexperienced adventurers which comprised of all your steadfast classics with a bit of exaggerated flair. You have the self-proclaimed leader and arrogant Ranger (think Flynn from Tangled), the lockpicks lacking Thief, a ditzy naïve Elf, the battle craving Barbarian, the lumbering Ogre that only the knowledge totting Wizardess can understand and a Dwarf…yup just a dwarf. There are few others like a Bard and Paladin that will join the chaos as you progress but the rest are mainstays for your adventure. 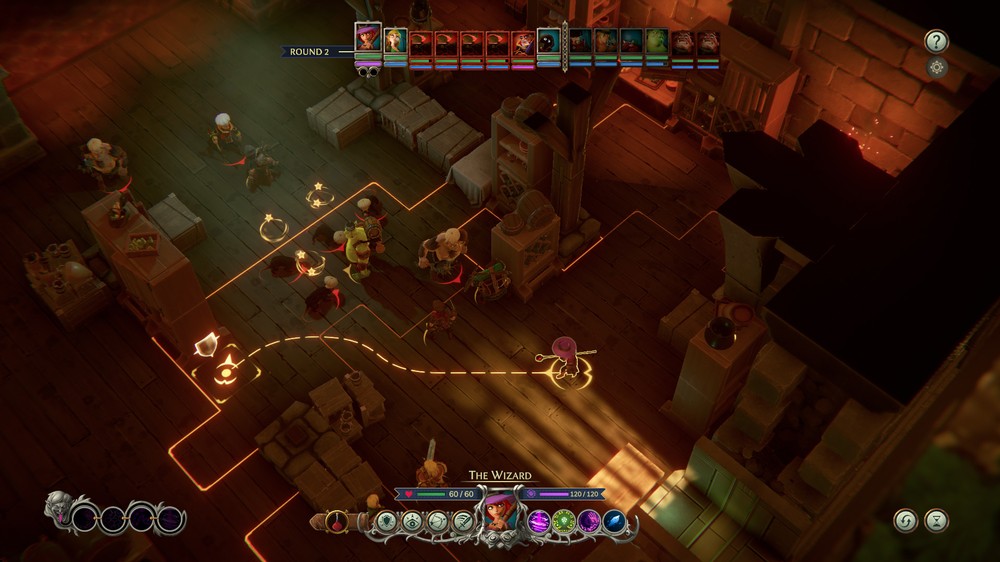 The caricatures of these characters are pulled from various forms of inspiration like the Barbarian sounding and referencing things like THE only Barbarian worth note in pop culture. “The Guild’s” Felicia Day is cast as the voice of the Wizardess, which in itself is awesome. The funniest bits are the bickering between the Dwarf and Elf which never gets old. If it does for you though, you can actually mute one or both of them in the menu settings. There is a ton of spoken barbs, puns and fourth-wall breaking hilarity to be had here even in combat.

Even the tutorial gives you shit about holding your hand. It does however do a great job of laying down everything you’ll need to know to survive the dungeon. Hilarity aside The Amulet of Chaos features a pretty solid tactical RPG experience. Players start each battle by positioning their party members how they like within the starting grid. Once you start the fight you must move your characters around the grid-based battlefield making use of obstacles as cover. You get to choose which direction your current character is facing after moving in anticipation of your following attack within your 2 move allotment. 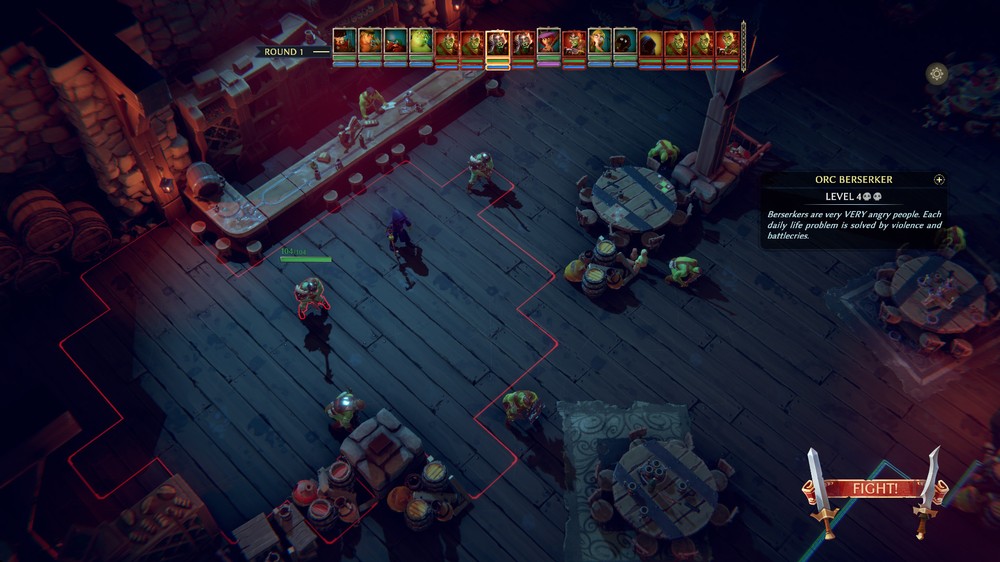 If you can’t really utilize a character on their turn based on their skills you can set them to defensive stance and our delay their turn. If they have ranged attacks you can also set them up for Overwatch as long as you don’t move first. This can be a huge help as any enemy that moves through your cone will get a nasty surprise. This goes both ways as while you’ve foes come from your classic bestiary they can use the same tactics as you. The other mechanic I liked was if you or your enemy moves in proximity to one another there is an opening for an additional opportunity attack. Again that goes both ways so planning your next move is crucial especially depending on what difficulty you choose when starting the game.

Every playable character is unique as well offering a variety of skills both active and passive. While the active ones are pretty straightforward it’s the passives that can really spice up the action. For instance once you gain the ability you can use an ogre ability that will allow you to kick up the dwarf and lob him into a group of enemies for explosive effect. Another passive will give the Dwarf a boost if they are standing next to the elf due to their dislike of each other. There are other synergies to discover and unlock so feel free to try different things. 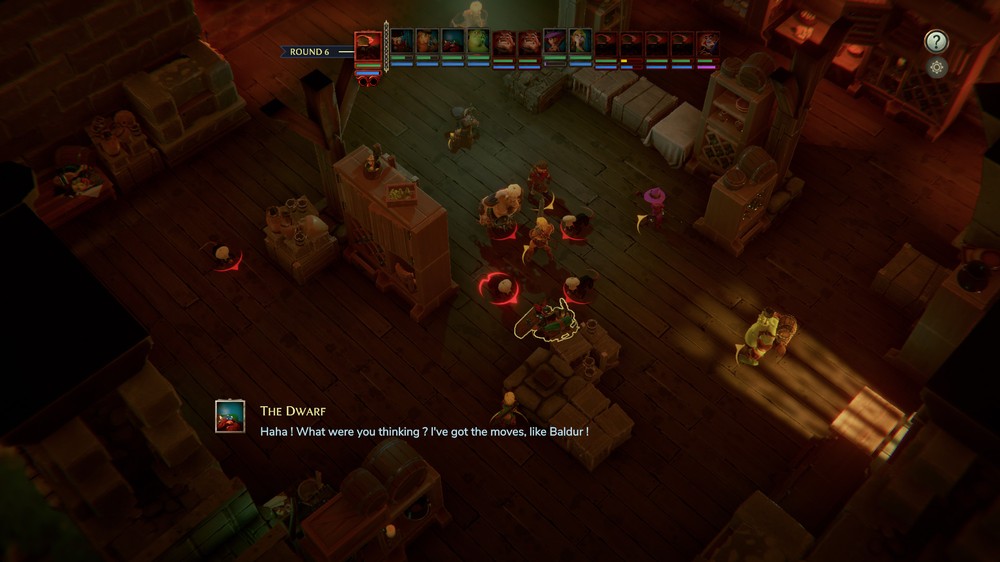 Each skill you unlock will have two upgrades but you only get to choose one of them as the other is locked out. If you feel you’ve goofed on an ability selection you can reset them with an Elixir of Oblivion the next time you’re visiting the inn. Did I mention the inn is actually located IN the dungeon?! The thing about combat is that when attacking or using your skills there is always a chance for it to fail with a missed attack or your foe gets in a critical hit on you.

This is normal but there is a potential upside to this as it ties into the most interesting mechanic I found, the Luck Meter. Every time a bout of bad luck happens a gauge dedicated to the Goddess of Luck will fill up. As you fill it up you’ll unlock various special abilities like healing a character or gaining an extra action. Sometimes it will teleport someone somewhere else on the battlefield. It’s an interesting mechanic and can make whiffing on several consecutive attacks a little less painful. 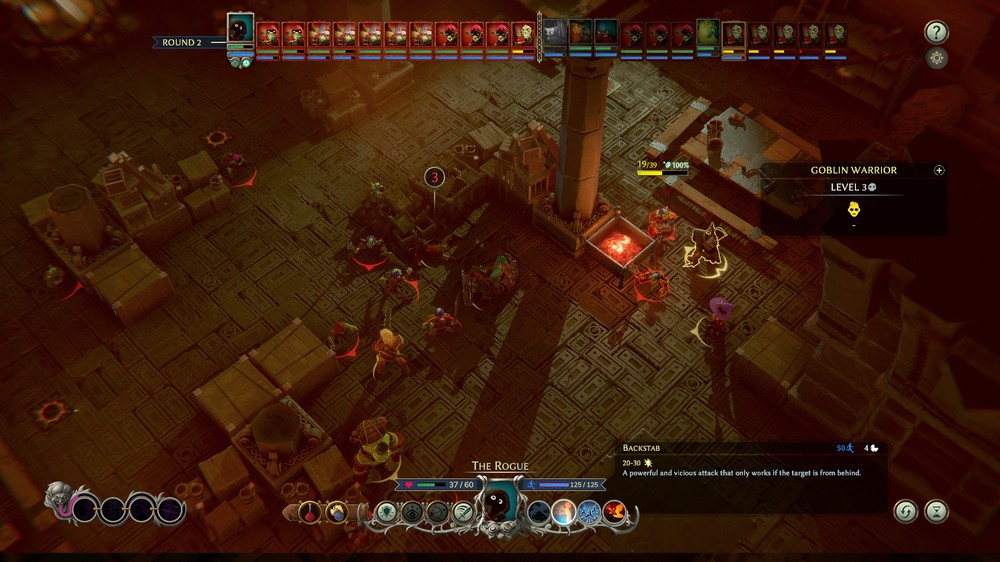 On top of all the deep mechanics, satisfying combat and heaps of banter is the visual and auditory splendor. As is fitting for a parody of the RPG genre the visuals right down to the character’s equipment are exaggerated in a cartoony style. That’s not to say that there isn’t plenty of detailing to be seen. The levels themselves are a mix of foreboding and somewhat cheerful at times. It’s the little details like the character animations or equipment moving on your character as they move that makes them pop with life. One small hitch at times is the camera as it sometimes gets in the way of allowing you to see animation as they happen in story bits. You do have the ability to rotate the camera so it’s not all bad as there are several different locales to visit within the dungeon.

Audio is pretty solid with both the music and the dialogue. I did seem to notice that audio in some of the menus doesn’t always fire particularly on the character screens as I could see mouths moving at times with no actually voices present. Combat music also dropped off at times though not sure if that deliberate or not so not a deal breaker there. The dialogue including your choice of a male or female narrator is in on point most of the time including Felicia Day’s performance. Given the franchises roots I found that important and they succeeded quite well. 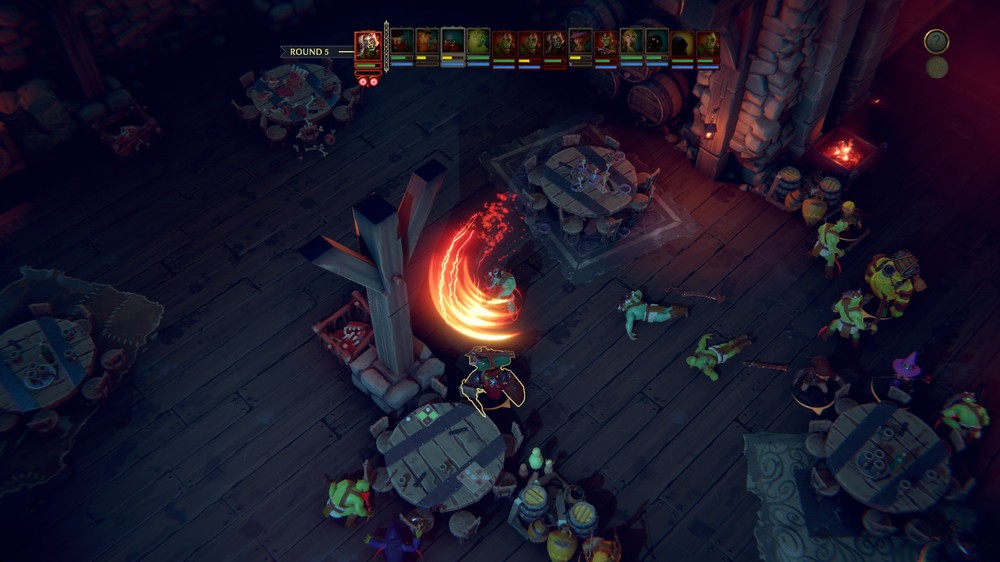 At the end of the day, my experience with The Amulet of Chaos was a fun one filled with puns galore, pop culture references, the unexpected bit of bleeped profanity and most importantly fun combat. As a longtime fan of the RPG genre, this title hits on all the tropes and clichés that I’ve known, loved and hated throughout the years. It’s the game that while on the surface doesn’t seem to take itself serious, hides an intricate combat system in the veins of Divinity and other franchise. If you love Tactical RPGs like I do as well as parodies then you have to play The Dungeon of Naheulbeuk: The Amulet of Chaos available now on PC via Steam, Epic and GOG today.