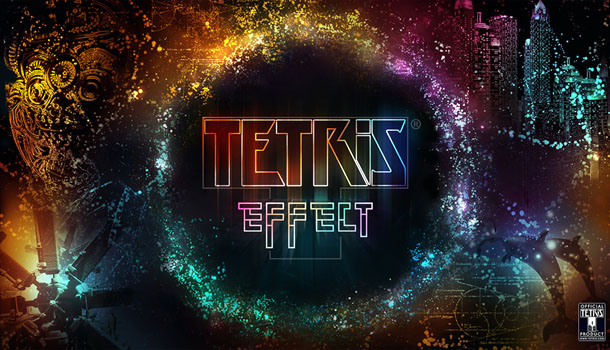 While I’ve only been playing Tetris Effect for the past 48 hours I’ve been playing Tetris for 31 years.  Yes, I was around when Spectrum Holobyte released the first commercial version of the Russian puzzle game back in 1987; pretty much the birth of PC gaming where we were being dazzled with 16-color EGA graphics.  Those who weren’t “cutting edge” could still play in 4-color CGA.   Over the past 30 years there have been countless spinoffs and variations of the Tetris theme, and the game has appeared on every conceivable format including flip phones and graphing calculators.

Ironically, despite the flashy effects and gorgeous 4K visuals found in the new Tetris Effect, the game hasn’t changed.   You steer, rotate, and fit various shaped blocks called Tetriminos as they fall from the top of the screen into a well.  The idea is to complete horizontal lines of blocks that will then vanish and count toward your line score.  Clearing multiple lines grants bigger points and clearing four lines at once is called a “Tetris”, and your goal is to play as long as possible before the blocks reach the top of the well. 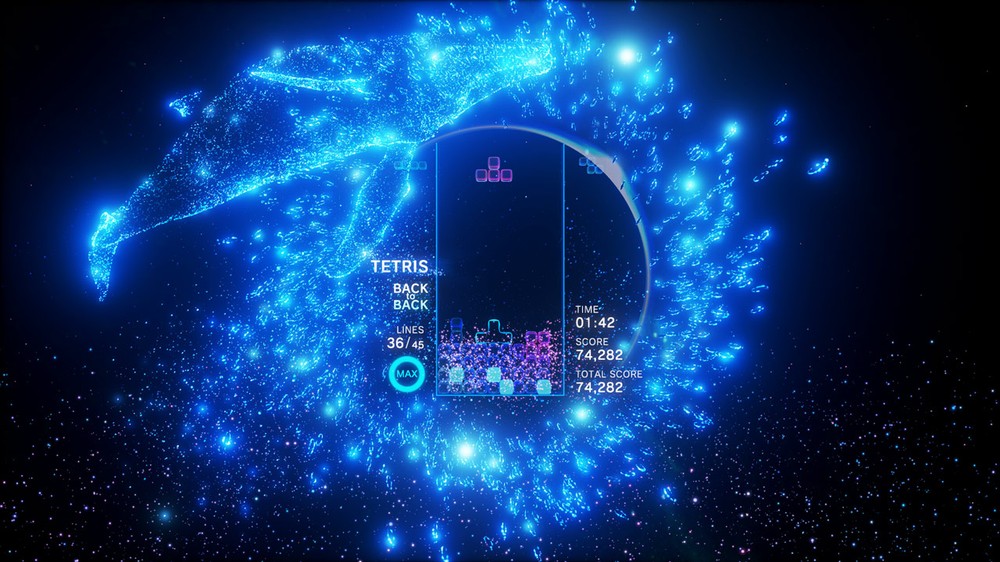 Tetris Effect expands on that premise with a few interesting enhancements to the original rules, but mostly this new vision of Tetris is here to wow you with dazzling visuals and a totally immersive VR experience for those with a PSVR, which leads into my main issue with the game.  Tetris is a game about focus and concentration, and while the game is totally playable in both screen and VR modes the epic presentation going on behind the scenes is constantly competing for my attention; perhaps a bit more so in VR since your peripheral vision is also being stimulated.   Tetris requires constant analysis of the current playfield, the block that’s falling, the block that’s coming next, and the block you may have in storage for swap.  So you are either going to tune all the “presentation stuff” out  in which case, why have it, or you are eventually going to get distracted by a horse or a fish and lose the game.

I did notice that all the visual glitz is not nearly as distracting when playing on a standard screen, but the default zoom is ridiculous, so make sure to go into options and zoom in the view.  It actually needs another level of zoom in my opinion, because on my 75” screen the actual Tetris playfield was a very small part of the overall composite image.  So you have 10% of the screen as playable and the other 90% as something trying to distract you from playing the game. 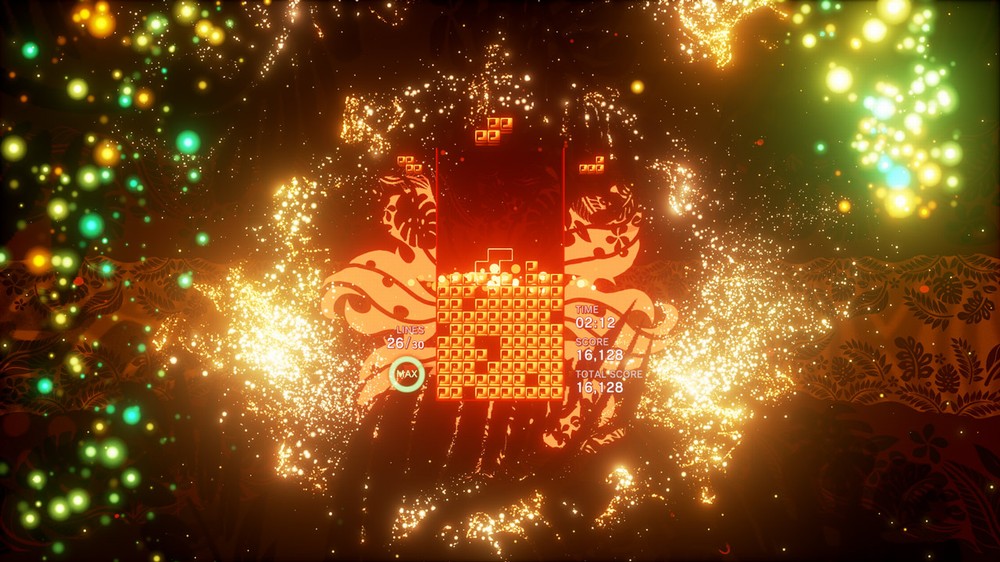 Tetris Effect offers three modes of play starting with the Journey Mode; 27 puzzles strung out in this galactic map and divided into six areas.  At the end of each area you are provided a summary screen with a score and a ranking.  Playing on Normal skill I was lucky to get higher than a D, and about halfway through the Journey map I was unable to even finish the puzzles at all, forcing me to swallow my pride and 30 years of Tetris experience and drop to Beginner where I was able to finish out the map.  The thing with Journey Mode is that each area may have 3 or more puzzles and each one carries your stack of blocks into the next puzzle, so if you are close to the top of the well and hit your line count and advance to the next puzzle where the speed is almost certainly faster, you are probably in trouble.   Unpredictable speed changes also led to many premature losses.  Normally there is a measured increase of speed as you complete lines but sometimes, out of the blue, speed would spike, going from a 5 to a 10 in the one puzzle that forced me to rage-quit and switch to Beginner.

Effect Modes is the place to go to experience the majority of the game’s content including all sorts of game modes, setups, and rules to fit your current mood.  Here, you get to choose your avatar from one of 200 unlockable options (or some you can pay for in the store), and even pin your location on the spinning globe.  The opening screen will not only show the top four trending modes at the moment, you will also see all the other Tetris Effect players orbiting the globe in avatar form along with their level number.  There is an orbit option that lets you swim around the planet and check out the map or swim by other players, and there are detailed rankings and leaderboards for all skill levels and game modes.  Despite all this slick global community presentation, Tetris Effect remains a one-player game, and Effect Mode is where you come to Relax, Focus, or test your skills in Adventurous and Classic game modes. 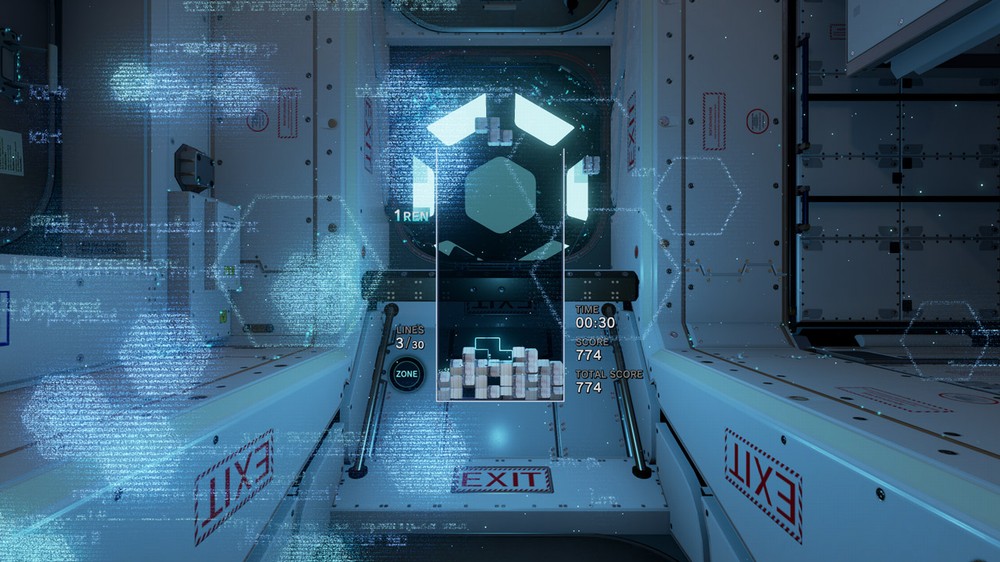 The third mode has yet to unlock as of this review, but is called Weekend Ritual and is basically a timed weekend event that runs for 24 hours where you play a specified Effect Mode to earn points toward a community goal.  If the goal is hit all participants get a special in-game avatar, and then you can do it again next weekend.

As far as just a Tetris game, Tetris Effect is pretty good if you can manage to avoid the distractions.  The D-pad moves the pieces side to side while pressing up will “hard drop” the piece immediately or pressing down will “soft drop” the piece faster than the current speed.  R1/L1 swaps pieces in and out of a holding area (once per piece), which can provide a huge tactical advantage.  One of the cool new gameplay enhancements is the Zone feature that slowly fills a meter as you clear lines.  At any time you can hit either trigger to freeze the game allowing you to manually move and place as many Tetriminos as possible until the meter expires, at which point all completed lines are removed for big bonus points. 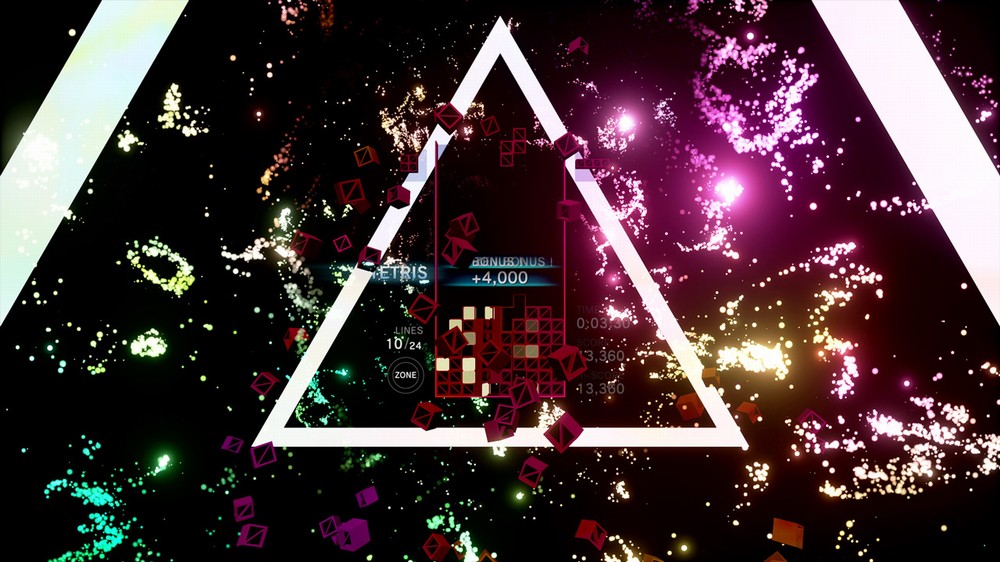 As stated earlier, Tetris Effect seems to be more about the presentation than the actual game, and when I learned that the developers were the same people who brought us Rez Infinite and Lumines that really sunk in.  Rez incorporated all of its psychedelic insanity right into the gameplay while Lumines was a Tetris derivative already whose gameplay was also hampered by distracting presentation.  Whether this imbalance of presentation vs. gameplay is an issue for you is totally subjective.  The level of creativity and technical artistry on display is truly remarkable in all these wondrous set pieces that I am doing my best to ignore for the sake of doing well in the game.  It’s so frustrating!

The one part of the presentation that you can still enjoy while successfully playing the game is the outstanding soundtrack.  This is the type of music you could just play on a loop and lose yourself in meditation.  Even better, many of the moves you make within the game create their own sampled effects that blend into the existing track to create something wholly original every time you play.  I really wish the game had a media player that would just play the music with the background art minus the Tetris game, so I could enjoy what I am continuously trying to ignore. 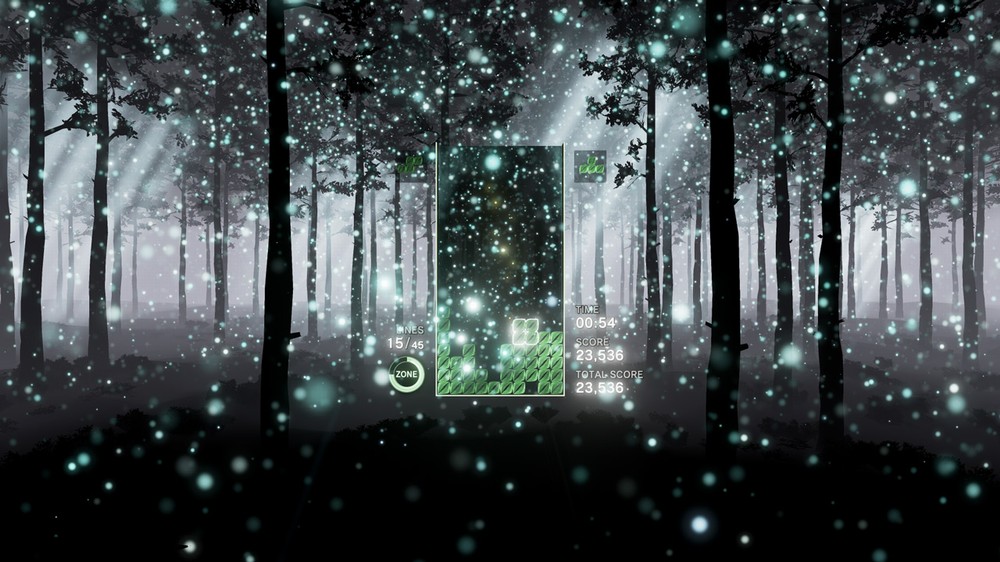 Tetris Effect in VR is stunning beyond words, but again is a logistical contradiction, and rather than just watching gorgeous environments you are actually in those environments.  It’s easy (or easier) to focus on gameplay sitting 8ft away from a TV screen, but it’s another thing entirely in VR being underwater surrounded by fish or watching a moon buggy drive across a lunar landscape, or flying down a neon skyline while New York jazz piano plays or any of the other truly remarkable set pieces.   There is an obvious hit in resolution when playing in VR vs. 4K, but the game still looks fantastic and there is one key benefit to playing in VR; a severe reduction in latency.  The refresh rate of your TV screen versus the PSVR lenses makes the controls much more responsive.

Tetris Effect comes off as more of a novelty title than a game targeted toward serious Tetris gamers (if any are left).  Tetris was born out of simplicity; a game playable and just as enjoyable on a black and white Macintosh decades ago.  I’m sure 4K and HDR could probably enhance Tetris in some way, but creating dozens of gorgeous distractions probably isn’t it.  As a game, Tetris Effect scores a 3, but as an experience I would give it a 4, so I guess we’ll meet in the middle on this one.  I enjoy a psychedelic light show as much as the next person, but this game makes me struggle to play Tetris to enjoy that show, and if I wanted to just play Tetris I have dozens of other options, most of which are far better for doing that.