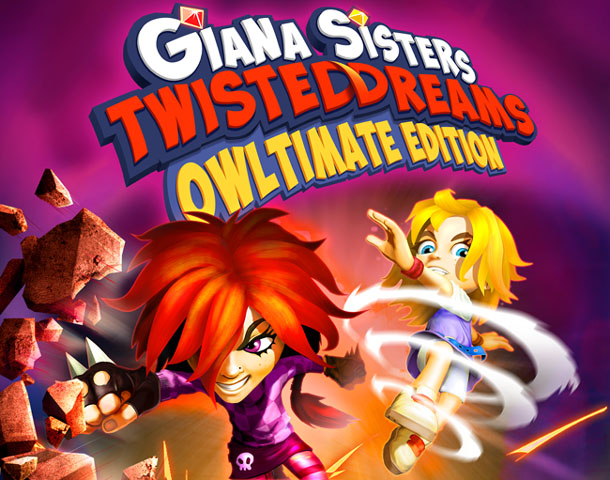 Having never had the opportunity to play the original The Great Giana Sisters from the mid-80s or its 2009 reimagined version on the DS, the only prior knowledge I had of the Giana Sisters franchise was some vague impression that it started life as a Super Mario Bros. knockoff – albeit one that many gamers spoke of with fond nostalgia. In fact, it was popular enough that German company Black Forest Games, whose team includes many members of the original company that previously developed Giana Sisters, garnered enough support in their 2012 Kickstarter campaign to bring us a solid sequel, Giana Sisters: Twisted Dreams that year.

In Twisted Dreams, Giana and her sister Maria are sucked into the world of their dreams and nightmares. Unfortunately, once there, Maria is captured by a dragon called the Gurglewocky, and it’s up to you, as a teenaged Giana, to rescue her. In this game, Giana can switch generally at will between her Cute and Punk personas, which simultaneously changes the landscape around her, as Cute Giana lives in the nightmare version of the world, and Punk Giana inhabits the cutesy candy-cane-dotted dream version. 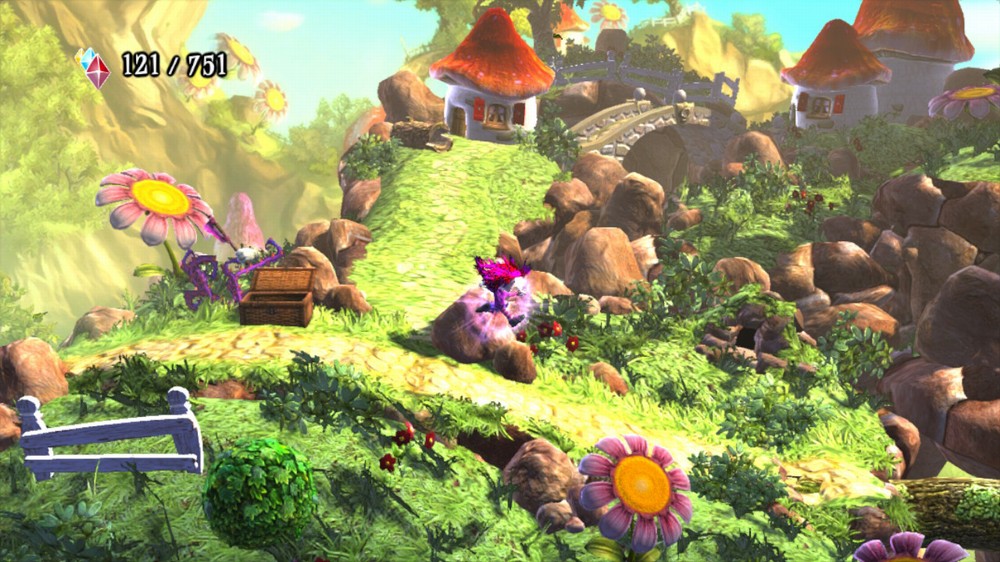 Switching personas and worlds isn’t purely aesthetic, however. Both versions of Giana can run, jump, and duck, but only Cute Giana can initiate a twirl, allowing her to float across distances and fall slowly, while only Punk Giana can dash, allowing her to punch through most enemies and ricochet off surfaces. The landscape changes in functional and interesting ways, too. For instance, a solid stone bridge in the dream world could be a gaping ruin in the nightmare world; and some hazards, like thorn bushes and invisible platforms, transform between one world to the other, often opening and closing various paths through each level. Especially as you advance through the game, you’ll find that it’s not just advantageous but necessary to constantly switch between the two personas and worlds, sometimes very rapidly in succession, in order to progress.

Luckily, Twisted Dreams’s controls are tight, responsive, and intuitive, and as a result, the game is a pleasure to play. It’s just too bad, though understandable given the game’s overall design, that multiplayer co-op isn’t an option in this game. The levels ramp up in challenge at what feels like a natural pace, and it’s clear to see that they’ve been lovingly designed with a great deal of attention to detail. Each area makes clever use of Giana’s deceptively simple ability set and world swapping effect, gradually opening the player’s eyes to new and more complex ways these few abilities can be used. 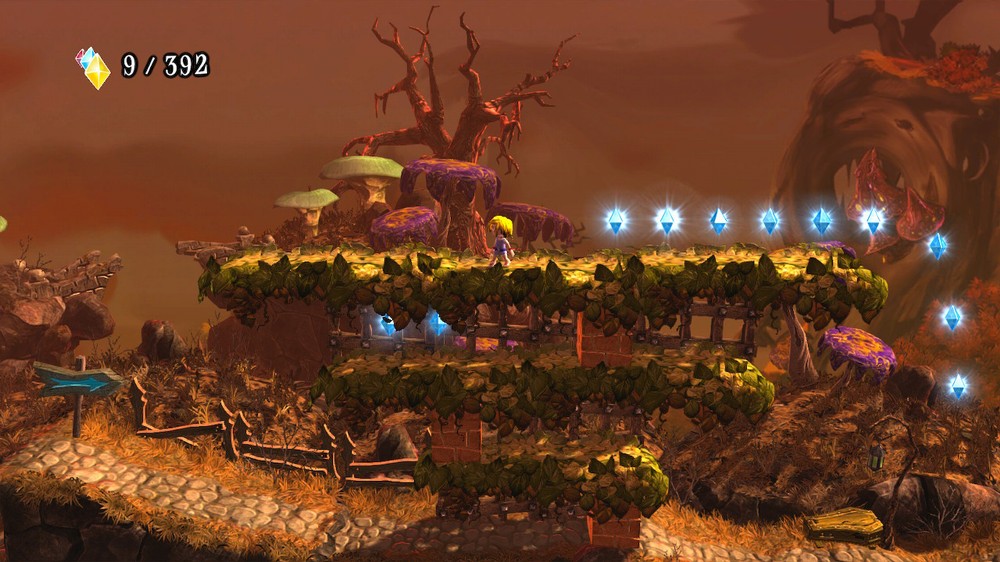 Also, besides getting to the exit, you’re tasked with collecting the gems placed throughout each level. At Normal difficulty, collecting gems is optional; however, certain numbers of gems are required to unlock boss levels in Hard mode and beyond, and gathering these gems isn’t always easy. Either Giana can collect blue gems, but only Cute Giana can pick up yellow gems, and only Punk Giana can grab red gems, so some passages require some quick switching to collect them all. Also, Twisted Dreams is riddled with numerous hidden areas to discover, many requiring getting through a more challenging platforming puzzle to access them. The game encourages you to explore and seek out its secrets, as these often hold large caches of gems required to fully complete the level, as well as the giant gems that additionally unlock bonus concept art.

On the subject of art, it’s hard not to stop and admire the gorgeously detailed graphics in this game, with their juicy, vibrant colors and fantastically springy world transformation animations that can be mesmerizing to watch. Sometimes in the middle of a level, I’d find myself switching back and forth just to watch fallen tree trunks morph elastically into giant spiny vertebral columns, dining tables into torture devices, or turtles into giant leaping piranhas. The soundtrack goes through a similarly seamless shift, the same melody flowing from sugary, crystalline synth to Swedish band Machinae Supremacy’s heavy-metal guitar riffs without missing a beat. 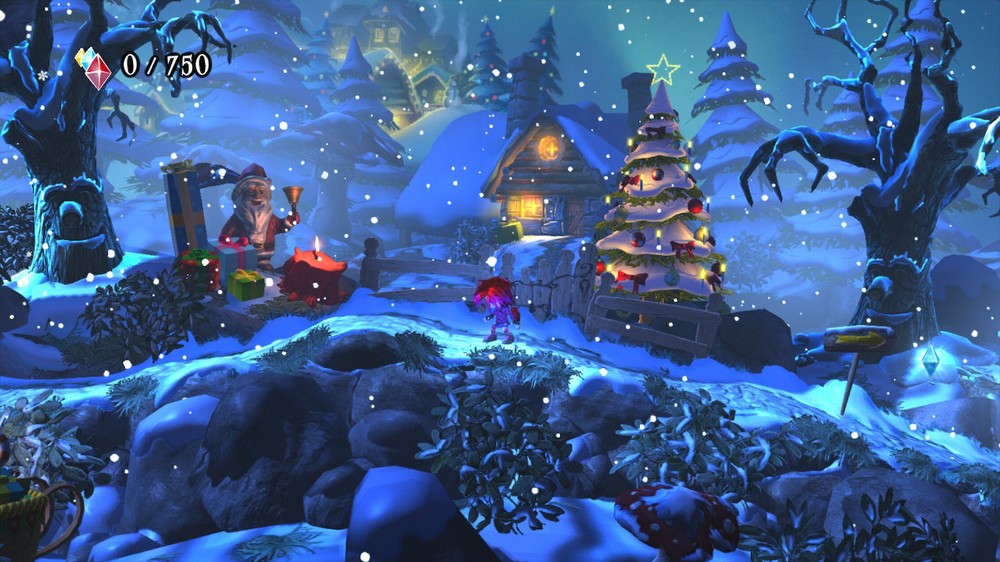 Difficulty-wise, Twisted Dreams isn’t the most punishing platformer I’ve ever played, especially thanks to the generous checkpoints in Normal mode, where Giana restarts if she accidentally runs into an enemy or environmental hazard. It’s not a pushover, either, so more casual gamers may find it on the difficult side. I cut my teeth on old-school platformers and had my own moments of frustration, dying over 50 or 60 times on some levels. If Normal isn’t enough of a challenge for you, though, there’s a Hard difficulty with fewer checkpoints available right from the start, Hardcore difficulty (unlocked for levels you’ve beaten on Hard and which removes all checkpoints and forces you to start the level over if you die), and Uber Hardcore difficulty (unlocked through completing Hardcore and which forces you to start the entire game over if you die), for players who have already mastered the Normal difficulty and still want more. If that’s not your cup of tea, there’s also a Score Attack mode, in which you try to collect as many gems and kills as fast as you can in any given level, and a Time Attack mode, in which you try to get to the end of the level as fast as you can, ignoring gems and enemies.

That said, the game isn’t wholly perfect. One mild downside of the lush 2.5D graphics is that all that depth and detail can occasionally make it less than immediately obvious which objects can be jumped on, or which details in the environment (like some crystals, plants, and propellers) can kill you when touched. Also, even in this later release, I encountered some bugs in the later levels, and Giana ended up stuck inside a wall with no way out on at least a couple occasions. Unfortunately, there’s no way to manually restart from the nearest checkpoint, so encountering a bug may also mean restarting the entire level, which can be pretty annoying if you’ve already made your way past some gnarly sequences before glitching. Load times at the beginning of each level are also a little longer than I’m used to with platformers, and while I enjoyed watching the shadow-puppet-esque pre-level animations (which impart helpful gameplay hints and sometimes give us poignant glimpses of Giana’s real life outside of the dream world) during my leisurely playthrough, I can see how someone trying to perfect a level would find the delay exasperating. Still, these are just a few nitpicky weaknesses in an otherwise very enjoyable puzzle platformer. 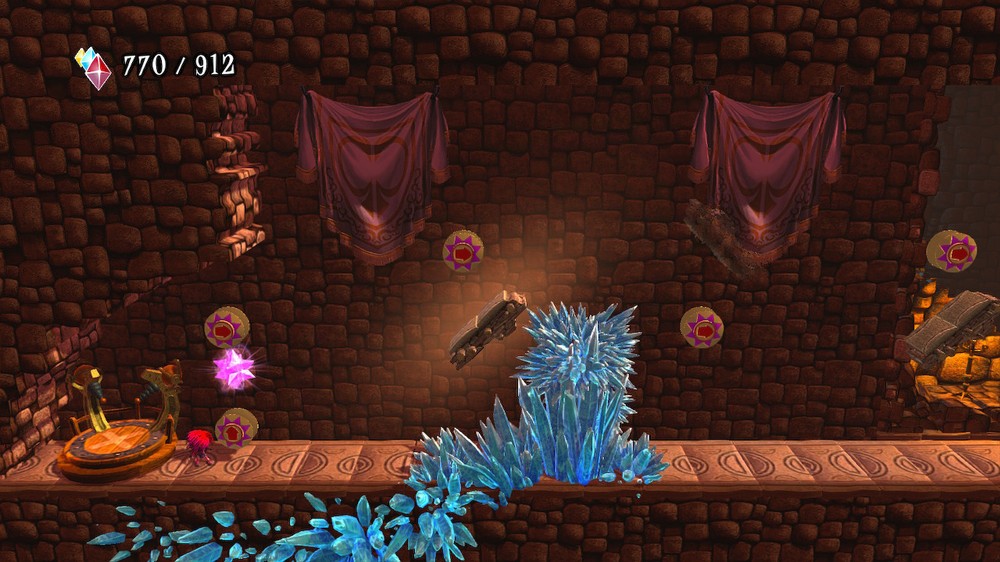 The version of Giana Sisters: Twisted Dreams released on the Nintendo Switch, the Owltimate Edition, includes the base game (which itself has 31 levels, including boss levels), the Rise of the Owlverlord expansion (which adds a fourth chapter of additional levels and a new boss), and other extras, including bonus Halloween and holiday levels accessible right from the beginning. With the secret-packed and multi-branched level design, multiple unlockable game modes and difficulty levels, and collectible gems and concept art for the completionist, this edition offers good replay value. It also runs smoothly and looks beautiful in both portable and big-screen modes. At the time of this writing, Giana Sisters: Twisted Dreams – Owltimate Edition is going for a reasonable $29.99, and I wouldn’t hesitate to recommend this puzzle platformer on the Switch. 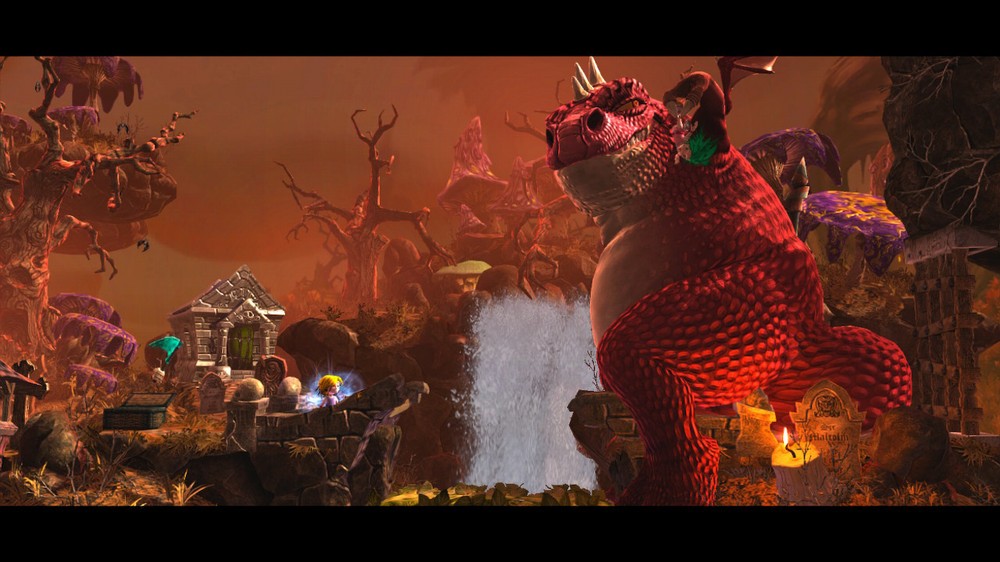