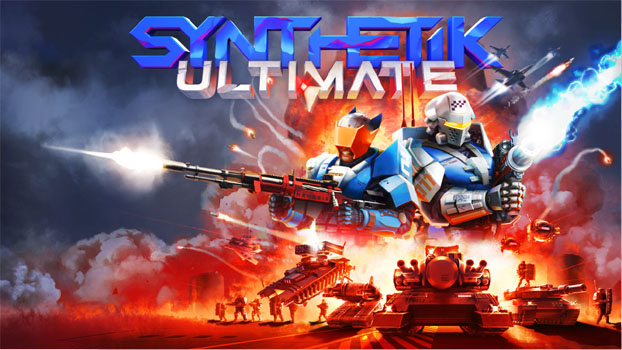 When I think of roguelike games, the first thing that usually springs to mind is a pixelated side-scrolling platformer with a cutesy aesthetic that hides a punishing difficulty. I don’t often jump to an image of a cyberpunk world full of androids and drones, but that is the scenario that Synthetik: Ultimate presents. Originally released on PC, Synthetik is an isometric twin-stick shooter that asks the player to make their way through various floors of a corporate headquarters while gunning down foes and gaining an increasingly deadly arsenal of weapons and tools as they go.

When I first started playing Synthetik: Ultimate, I have to say that I was a little overwhelmed by everything that was happening on screen. You’re plunged right into the action from the get-go, and there isn’t much explanation as to what you’re supposed to be doing or how you’re supposed to be doing it. All you know is that there are enemies shooting at you and in true videogame fashion, you’re expected to shoot back. It isn’t until your character perishes for the first time that things start to be explained, but even then there are plenty of mysteries left for you to uncover as you play. 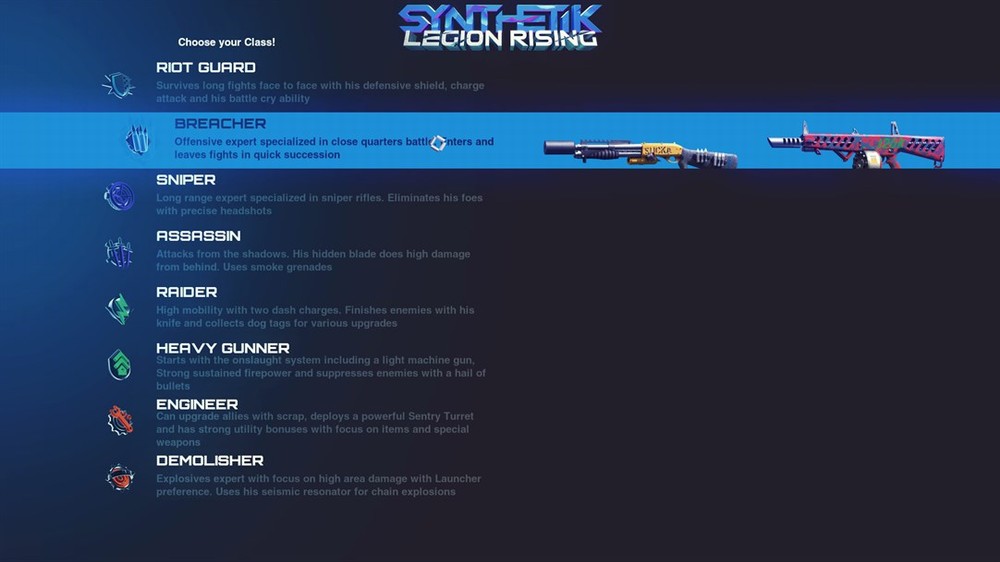 Dying for the first time takes you to the main hub screen, and while you’re able to select a character class when you first boot up Synthetik, it is here that you really start to learn the differences between the eight different options, from those that are focused on run-and-gun styles to others that are concentrated on using machines to do your dirty work for you. You’re able to switch up the weapons that you take into each run too, as well as the two accessory tools that can include health stims or stun guns to help you against enemies that might stray too close.

Perhaps the most important aspect of this menu screen, though, and of Synthetik as a whole, is the area where you have control over the experience itself. You are able to determine the difficulty of each run and in turn, this dictates the rewards that you are eligible for. You gain a certain amount of data depending on how well you do in the game, and this data is used to purchase additional weapons, equipment or bonuses to help you progress further, creating a risk and reward system of pushing yourself just hard enough to gain maximum rewards without creating an environment that is too difficult for you to succeed in. 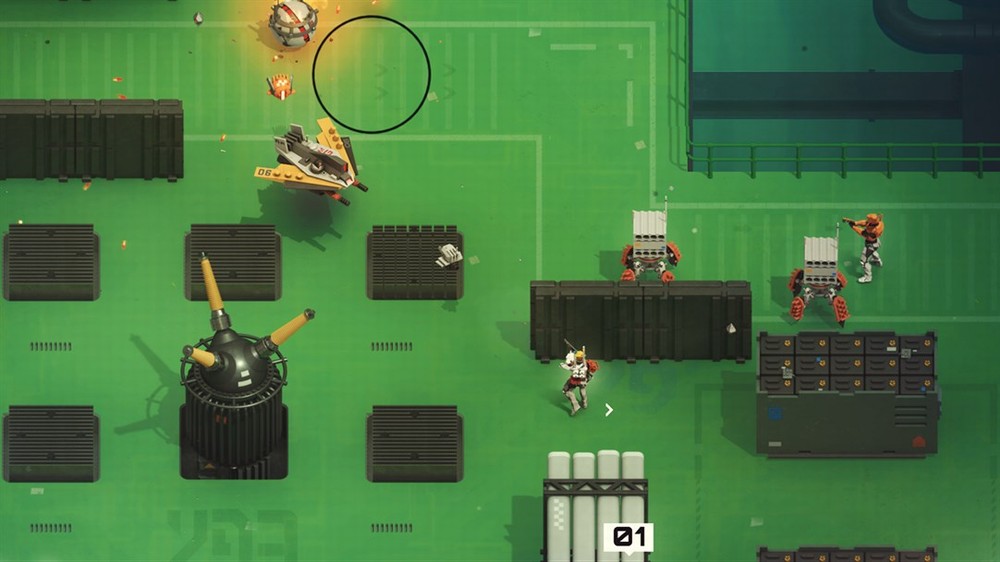 These basic difficulty settings are enhanced by the inclusion of curses, which give you the option of hampering your character in exchange for increased chances at further rewards. These can range from simple nerfs to slower cooldowns for your abilities or causing your character to flinch when hit to increasing the chances of your guns jamming when they are being fired. This requires a rapid hammering of the reload button to clear the issue and can easily flip the chances of success or failure if it happens in the middle of a gunfight but can also allow for far greater rewards if you’re able to overcome it.

Having your jammed weapons require a form of manual correction is just one way in which Synthetik: Ultimate attempts to create a feeling of tactility that isn’t often seen in games of this type. There’s a Gears of War-like reload functionality, where you’re required to manually reload your weapon with button presses and the fact that switching a magazine while it still has rounds inside causes you to lose that potentially valuable ammunition. For a twin-stick shooter there’s a surprisingly high penalty for relying on mobility as well, as your accuracy drops dramatically if you try to fire while moving. This means that you’re often better off finding cover and hunkering down for a short while, firing off a few shots before moving somewhere else and repeating the process. 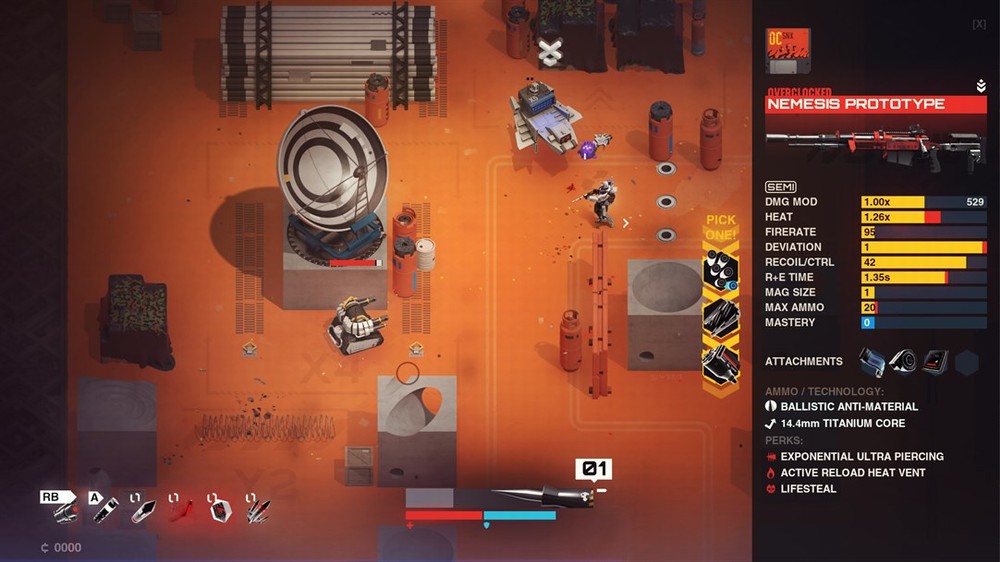 The more that I played Synthetik, the more I started to gain a handle on all of the information that was being presented to me, but I found that I was never fully able to relax while playing as there was a constant sense of frantic, edge of the seat action that requires your full attentions at all times. Whether it’s analyzing threats to determine if a group of enemies is a risk worth taking, exploring for resources that could grant you a better weapon or accessory, or even something as small as making sure that your weapon has just enough ammo to get you through your next encounter, Synthetik presents you with a lot of information that you need to stay on top of, and taking your eye off of the ball in one area could be the difference between life and death the next time you have a gun pointed at you by an enemy.

If I’m being entirely honest, my first impressions of Synthetik weren’t great, as it felt confusing, clumsy and bordering on badly designed. However, the more I played through the game and the more that I began to understand its mechanics, I started to realize that the clumsiness is almost intentional and that what I initially thought was bad design was in fact a series of decisions that led to Synthetik becoming more memorable than a number of similar games that I have played in recent years. The fact that you are required to take ownership of your weapons and ammo adds extra layers to the experience, and rather than focusing solely on which weapons have the highest damage stats, you’re looking at fire rates and ammo capacities to weigh up whether an improvement to damage is worth the risk that you’ll likely have to spend valuable seconds reloading mid-firefight. 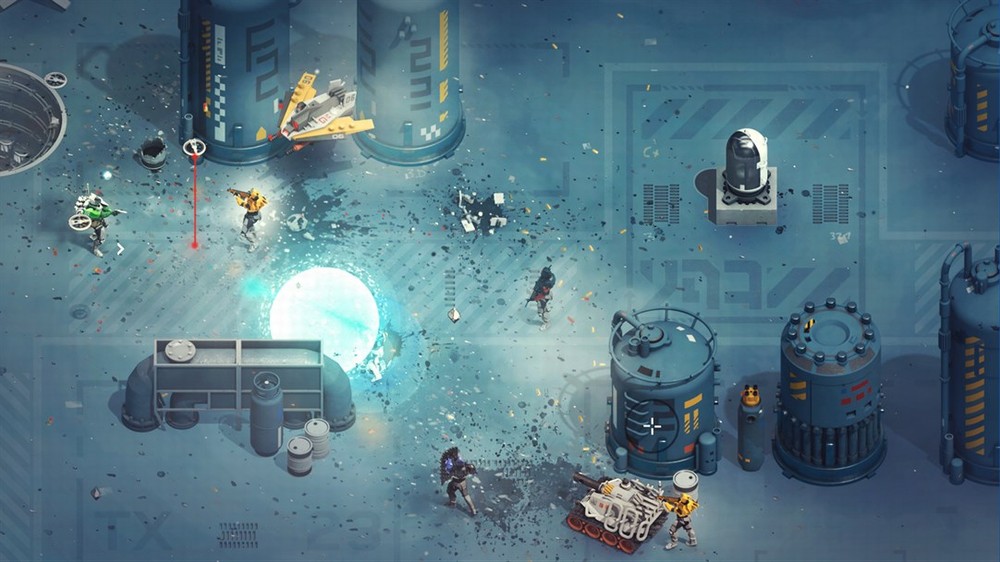 When this is combined with systems that allow you to balance the difficulty of the game against how much of a reward you’re willing to risk, it starts to become apparent how each mechanic forms a part of an entire experience that feels quite different from other roguelike titles. You’re quickly fully invested and immersed in the experience, and the fact that there’s often a sense of being overwhelmed and overloaded adds to Synthetik’s attempts to make itself feel like the player is part of the experience. It’s not the kind of game to sit back and relax with at the end of a long day, but if you’re looking for something to feel invested in then, Synthetik: Ultimate is well worth a look.